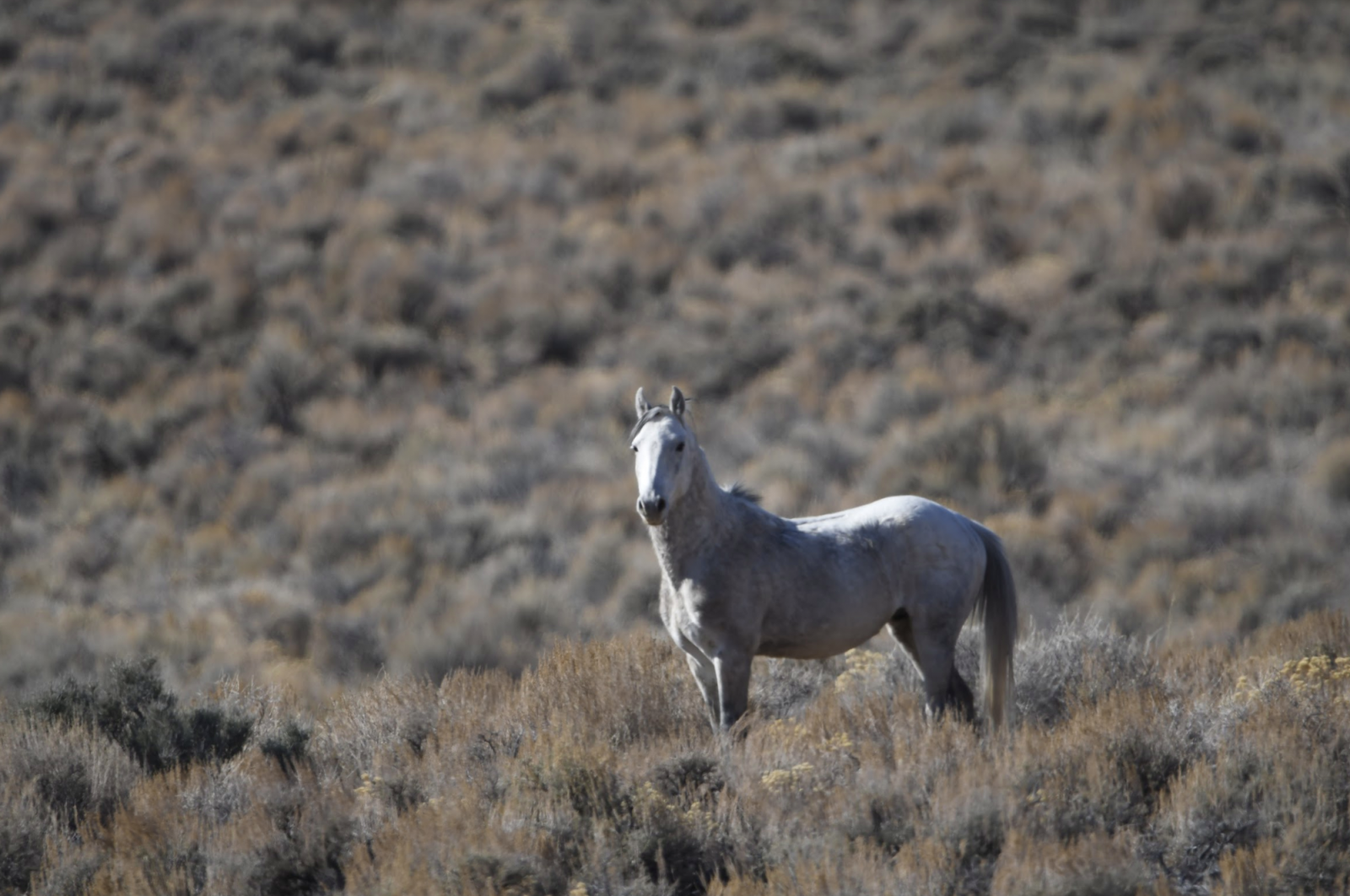 Fifty million years ago, a small dog-like creature called Eohippus evolved on the North American continent. In fact, this forerunner to the modern horse was traced to the Tennessee Valley. After evolving into Equus and disappearing into Asia and Africa presumably 11 to 13 thousand years ago, the horse returned to our soil with the Spanish in the early 1500s. From their hands, a few escaped onto the American canvas and reverted to a wild state.

According to Western writer J. Frank Dobie, their numbers in the 19th century reached more than 2 million. But by the time the wild horse received federal protection in 1971, it was officially estimated that only about 17,000 of them roamed America's plains. More than 1 million had been conscripted for World War I combat; the rest had been hunted for their flesh, for the chicken feed and dog food companies, and for the sport of it. They were chased by helicopters and sprayed with buckshot; they were run down with motorized vehicles and, deathly exhausted, weighted with tires so they could be easily picked up by rendering trucks. They were run off cliffs, gunned down at full gallop, shot in corralled bloodbaths, and buried in mass graves.

Like the bison, the wild horse had been driven to the edge. Enter Velma Johnston, a.k.a. “Wild Horse Annie.” After seeing blood coming from a livestock truck, she followed it to a rendering plant and discovered how America’s wild horses were being pipelined out of the West. Her crusade led to the passage of a 1959 law that banned the use of motorized vehicles and aircraft to capture wild horses. In the end, it was public outcry that ended the open-faced carnage — and it came from the nation’s schoolchildren and their mothers: in 1971, more letters poured into Congress over the plight of wild horses than any other non-war issue in U.S. history; there wasn’t a single dissenting vote, and one congressman alone reported receiving 14,000 letters. President Nixon signed the bill into law on December 15, 1971. And so the Wild Free-Roaming Horse & Burro Actwas passed, declaring that “wild horses and burros are living symbols of the historic and pioneer spirit of the West; that they contribute to the diversity of life forms within the Nation and enrich the lives of the American people; and that these horses and burros are fast disappearing from the American scene.” The Act was later amended by the Federal Land Policy and Management Act of 1976 and the Public Rangelands Improvement Act of 1978.

By the people, of the people, for the people. There has never been a truer case. Wild Horse Annie’s 1959 legislation allowed the mustang (from the Spanish word mestengo, or “stray beast”) to get a desperate foothold in the American West. Wild horse numbers grew and consequently encouraged the wrath of ranchers who enjoy subsidized grazing for their cattle on the public domain. The Bureau of Land Management (BLM) and the U.S. Forest Service were appointed to implement the 1971 Act (most herd areas are under BLM jurisdiction). Their responsibilities also include issuing public land grazing permits to cattle ranchers.

It is a war as old as the West itself. What is useful is used, what is not is destroyed—with contempt. In a mechanized world, not even the cattle industry has a need for living horsepower.

The history of wild horse management is as complex as it is controversial. The 1971 Act stipulated that the wild horse be managed at its then-current population level, officially estimated by BLM at 17,000 (three years later, BLM’s first census found over 42,000 horses). To the horses' detriment, both sides agreed to allow the government to manage wild horse populations at that “official” 1971 level. Eleven years later, a study by the National Academy of Sciences found BLM’s 1971 estimate to have been “undoubtedly low to an unknown, but perhaps substantial, degree,” given subsequent census results and taking into account the horses' growth rate and the number of horses since removed. But the damage had already been done; "management levels" had been etched in stone, and processes for removal of "excess" horses were well in place.

Enter Senator James McClure (R-ID), head of the Committee for Energy and Natural Resources and for Interior and Insular Affairs. Himself a man of the West, and believing the horse to be a useless free-loader on public lands, he set out to help rid of them. A stacked deck of officials was appointed to the BLM based on McClure’s ability to fund the agency, and — as some activists describe it — a “new kingdom emerged.” New trucks. New positions. And a new plan.

When the 1971 Act was passed, wild horses and burros were assigned 303 herd areas representing some 47 million acres of public land. Over the years, agency regulations — not legislative amendments — have stripped the horses of their range; they are now managed in 201 Herd Management Areas (HMAs) on less than 35 million acres.

In 1976, determined to remove wild horses but unable to capture them on horseback, the BLM amended the 1971 Act to bypass the Wild Horse Annie Act’s prohibition on motorized vehicles for captures, thus allowing them the use of aircraft, such as helicopters. The rules — and the lands — remain split: the BLM and the Forest Service come under the 1971 Act; US Fish and Wildlife Service is still subject to the 1959 Act’s prohibition against motorized round-ups. In other words, the BLM has the power to use motorized vehicles to capture wild horses but it can’t kill them; Fish & Wildlife Service can kill horses, but can’t use motorized vehicles to catch them.

In the summer of 1993, the BLM estimated the wild horse population in Nevada to be at 24,000. Determined to show that the BLM’s figures of “excess” horses were inaccurate, activists logged more than 250 hours in the air, along with Michael Blake, author of Dances With Wolves, counting wild horses. They found 300 skulls and only 8,300 free-roaming horses. “This government is taking our horses when and where they please,” Michael Blake told the press. “They are taking them in the dark of night. The wild horses not going to the slaughterhouse floor — where their throats are cut for money — are traveling to points of incarceration.”

In 2001, the BLM obtained a 50% increase in annual budget to $29 million for implementation of an aggressive removal campaign. Twenty-four thousand horses were slated for capture with an “appropriate management level” target of 26,000. By its most recent figures, the BLM estimates the total American wild horse population to be about 33,000 animals (of which about half can be found in Nevada).

Today, some 36,000 wild horses are awaiting their fate in holding facilities such as Palomino Valley in Nevada, and Susanville in northern California. Four-year contracts have been awarded to private ranchers in Oklahoma and Kansas to manage long-term holding facilities. Each can hold 2,000-3,500 horses.

In 2005, BLM’s wild horse and burro budget was increased by another third. In Fiscal Year 2010, it received another 30 percent boost, now costing the taxpayer $64 million a year to allow the BLM to continue to round up and pipeline thousands more wild horses.

The Name and the Lands Game

In cattlemen terms, wild horses are “sons of bitches,” eyesores, habitat destroyers, and misfits; in BLM terms, they are “shitters.” History, on the other hand, will bear them out as scapegoats: contrary to popular belief, wild horses are not destroying public lands where they are found amidst 6 million heads of cattle and sheep. In fact, a 1990 General Accounting Office report showed that livestock consumed 81% of Nevada’s forage in the four studied horse areas.

Why is there such determination to rid our public lands of wild horses? For many — the livestock lobby, government agencies, and even environmental and wildlife protection organizations — the wild horse isn’t a wild animal at all, but a domesticated animal gone feral. This mongrel of a horse is not, they argue, native American wildlife. Considered an “exotic,” it competes for habitat with such species as elk and pronghorn antelope, and it decimates rangeland used by domestic livestock. It must be controlled, removed, and, if necessary, gunned down.

And it all boils down to money: under the Department of Interior’s “multiple-use” principles, only so much cattle, so much wildlife, and so many wild horses are allowed on federal lands. The wildlife is “paid for” by hunters’ licensing fees. Cattle are “paid for” by the meat industry: $1.35 per head per month to graze the public domain. Horses, on the other hand, take up one “Animal Unit Month” (AUM), but no one is paying their way. Each horse removed from the West frees up another AUM for cattle or sheep or game antelope (see Public Lands Grazing & the AUM Connection).

The BLM created its Adopt-A-Horse program in 1976. Since then, more than 200,000 horses and burros have been rounded up off public lands and sifted through the adoption pipeline.

In 1978, the Wild Free-Roaming Horse and Burro Act was amended by the Public Rangelands Improvement Act: among other changes, a titling program implemented by the BLM stipulated that an adopter could not technically “own” a wild horse until one year after its adoption, thereby making it illegal to sell it to anyone else during that first year. In effect, it made the expense of caring for a horse during that time outweigh its meat price.

Still, the program has been marred by scandal, with thousands of horses unaccounted for and feared slaughtered.

In 1984, after a regulatory change that relaxed conditions for removal of animals from the range, massive round-ups landed 40,000 horses in holding corrals. The BLM waived its fees to encourage more adoptions, resulting in an estimated 20,000 wild horses ending at slaughter.

In 1997, AP reporter Martha Mendoza exposed widespread corruption within the program in seven articles that ran throughout the year. That same year, a federal grand jury collected evidence that showed BLM officials had allowed the slaughter of hundreds of wild horses, falsified records and tried to prevent investigators from uncovering the truth. The case was eventually closed down after federal officials intervened.

Today, one can easily adopt a wild horse for as little as $125 a head. The cost to taxpayers for removing that animal from the wild is more than tenfold.

In response to numerous attempts by vested interests to cripple the 1971 Wild Free-Roaming Horse & Burro Act, Americans have made their intentions known time and again: they want wild horses — these feral, exotic, “sonsofbitches” — left in the public domain. In 1985, a provision aimed at allowing the government to sell our wild horses to slaughter came to a vote in Congress and was defeated. In 2004, the horses were not so lucky: Senator Burns (R-MT) managed to bypass the democratic process by slipping his slaughter provision into the 3,300-page federal budget. The slaughter of America’s wild horses was rubber-stamped, the will of the people ignored.

It can be said that no animal in human history has had as much impact on our lives as the horse. Millions have lost their lives in our wars. They have been used to transport us and our belongings across continents, to deliver our mail and network our civilizations, and they have plowed the fields that feed us. In these modern times, the horse is an entertainer, an athlete, an icon, and a friend — with more than 6 million of them in the care of American horse lovers. Yet, our Nation has abandoned its wild horses, these living symbols of our history and freedom.

The 1971 Act states: “It is the policy of Congress that wild free-roaming horses and burros shall be protected from capture, branding, harassment, or death.” For over thirty year, unabated, the BLM and the Forest Service have continued to engage in all those acts.