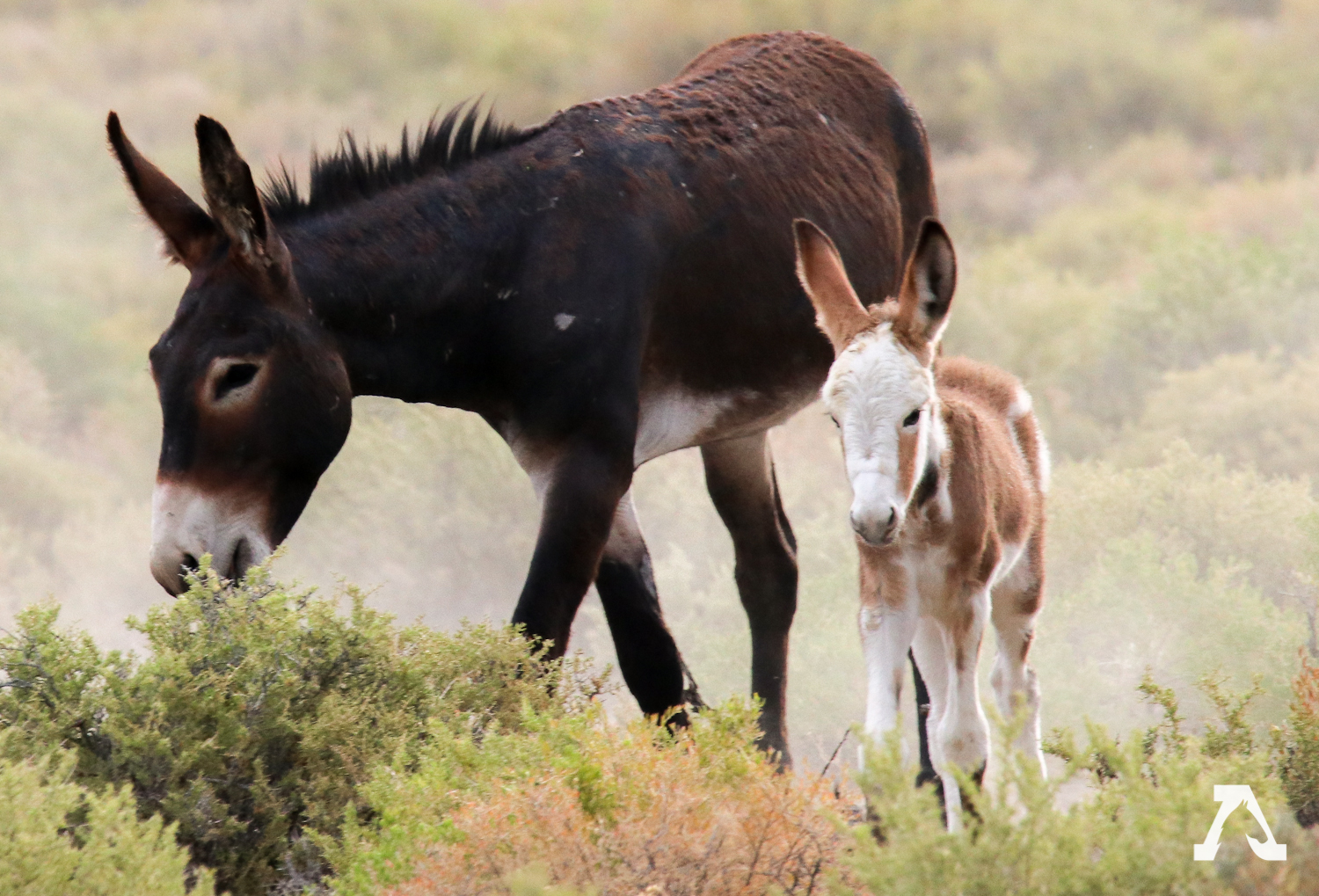 Wild horses are often in the spotlight, but the wild burros of the West are just as fascinating and deserving of our attention and respect. Like mustangs, burros are a link to America’s past and are protected under federal law as “living symbols of the historic and pioneer spirit of the West” that “contribute to the diversity of life forms within the Nation and enrich the lives of the American people.”

Burros are a member of the horse family, Equidae. Originally from Africa, they were introduced to the Desert Southwest by the Spaniards in the 1500s. (The word “burro” is derived from the Spanish word “borrico,” meaning donkey.) Today, most of America’s wild burros reside in Arizona, where they have been present since 1679 when Jesuit priest Padre Eusebion Kino brought them to the Spanish mission at San Xavier del Bac near what is now Tucson. Burros accompanied explorers and pioneers on their treks throughout the West, surviving even when the harsh conditions claimed the lives of their human “owners.” By the Gold Rush years of the 19th century, burros were used primarily in the Southwest as pack animals for prospectors. They worked tirelessly to carry supplies, ore, water, and machinery to mining camps and became indispensable to the workers. At the end of the mining boom, many of them escaped or were turned loose, and with their innate ability to survive under the harshest conditions, wild herds eventually formed and flourished.

Wild Burros have long ears, a short mane and come in a variety of colors, from black to brown to gray to red roan, pink and blue. The most common coloring is grey with a white muzzle and white underbelly. Wild burros average 44 inches tall and weight about 500 pounds at maturity. Male burros are known as jacks while females are called jennies.

The burros’ African ancestors evolved into two groups distinguished by their markings. The Nubian Wild Ass has a dorsal stripe and a horizontal stripe across the shoulders, forming a cross. The Somalian Wild Ass has leg stripes. These ancient markings can still be seen today in wild burros and domestic donkeys.

Wild burros have a lower protein requirement than wild horses and tough digestive systems that can break down desert vegetation and extract moisture efficiently. They eat a wider variety of plant species than wild horses, and they can go for long periods of time without drinking. These traits allow burros to survive – and thrive – in harsh desert conditions where water and forage are scarce.

Burros are highly intelligent animals. Although they can run almost as quickly as horses, when faced with potential danger, burros tend to assess a situation before fleeing, unlike wild horses and other ungulates. Burros can defend themselves with powerful kicks from their front and hind legs, and their tendency to stand their ground against potential threats to themselves and their established territories (homes) makes them excellent guard animals in domestic settings.

In the wild, U.S. burros do not exhibit the band structure or herd behavior of wild horses. Individual jacks stake out territories around water sources and the only stable groups are females and their foals. According to Dr. Patricia Moehlman, an African wild ass expert and chair of the IUCN Equid Specialist Group, this is due largely to the scarcity of water in the extreme habitats where burros survive today. In areas of greater water availability, wild burros will form longer-term, stable harem groups of bonded females and one or more males, similar to wild horses.

Jennies will have one foal per year. Births can occur year-round, but peak in May, June and July.

Around the 1950s wild horses and burros became the targets of ruthless ranchers who saw these animals as a threat to the vegetation available for their domestic livestock. Consequently, they were relentlessly hunted, brutally treated, and often sold for slaughter.

In 1971, thanks to public outcry and a successful grassroots campaign to end these practices, Congress passed the Wild Free-Roaming Wild Horses and Burros Act which designated the wild burros and horses as “living symbols of the historic and pioneer spirit of the West” and protected them on Bureau of Land Management (BLM) and Forest Service land in ten western states. Soon after, the BLM developed a misguided “management” method which, to this day, still primarily relies on inhumane roundups and removals of these animals from their homes on the range.

When the Interior Department's BLM conducted its first wild horse and burro census in 1974, an estimated 15,000 wild burros roamed the West. (Remember, this was a time that Congress declared burros to be "fast disappearing from the American West.) Today fewer than 9,000 burros remain. Like their cousins the wild horses, burros in the Western United States have been rounded up en masse, often to make room for livestock grazing, big game hunting and other commercial uses of our public lands. (Burros do not compete with cattle for forage, but they do have dietary preferences that overlap with sheep, including bighorn sheep.)

Unfortunately, wild burros on National Park Service (NPS) land are not protected under federal law and they have been subjected to extermination efforts in NPS areas such as the Grand Canyon and Death Valley.

While wild horse roundups get much public attention, roundups of burros, who make up a mere 17 percent of the wild horse and burro population in this country, often go unnoticed. Ever vigilant and not easily “spooked,” burros react differently to government helicopter roundups than wild horses. Unlike wild horses, who generally panic and blindly follow other horses into a trap site to stay together in their family bands, wild burros often scatter in an attempt to avoid capture. As a result, roundups can be even more brutal for burros, as they are chased relentlessly by helicopters (one video even showed a helicopter hitting and upending a burro). Former NBC News investigative correspondent Lisa Myers expertly covered the plight of America’s wild burros in her piece, “Cruel or Necessary? The True Cost of Wild Horse Roundups.”

Created in 2012 by the American Wild Horse Campaign, Burro Awareness Month takes place in May and celebrates these steadfast and hardy icons of the American West. Please take the time to review and enjoy the stories of appreciation and celebration here.