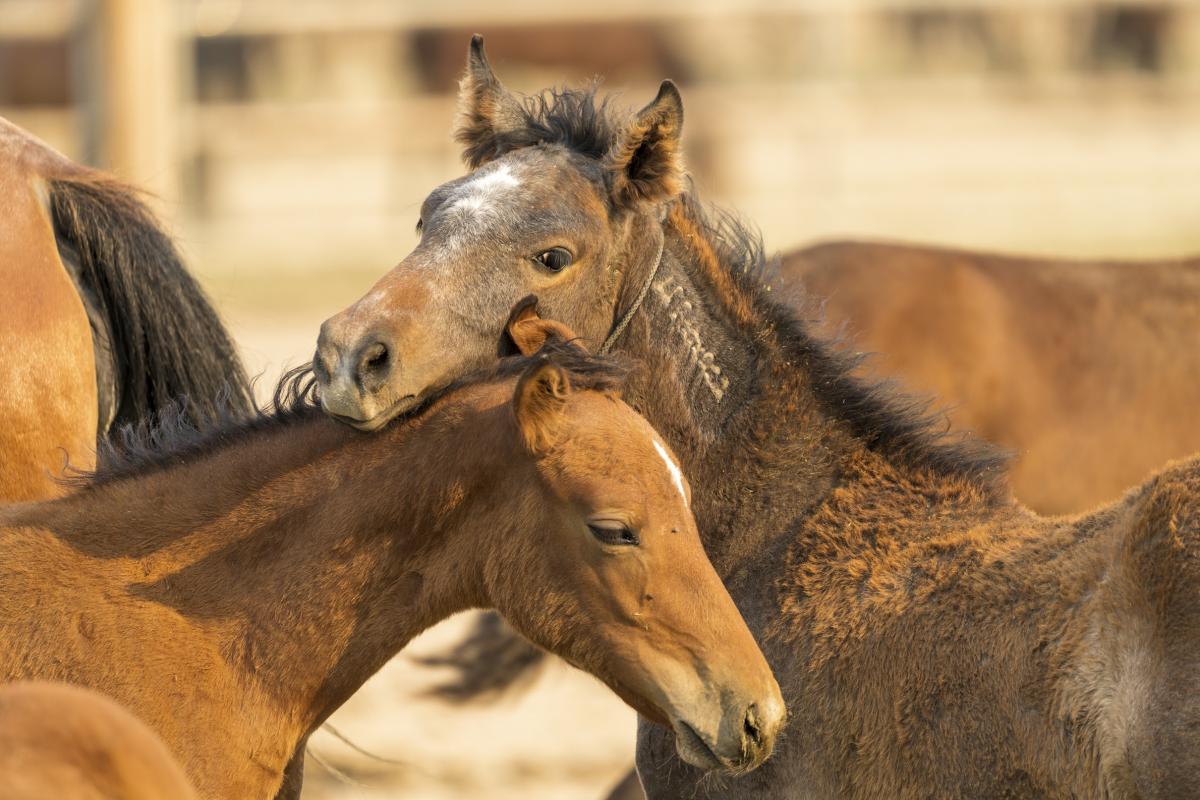 On July 26, 2021, the BLM announced a series of reforms to its Adoption Incentive Program (AIP) in response to AWHC’s investigative findings and an explosive New York Times report documenting the program as a taxpayer-subsidized pipeline to slaughter for federally protected wild horses and burros.

Unfortunately, the proposed reforms are not adequate and will not stem the flow of these cherished animals to slaughter auctions as a result of the AIP. To achieve that goal, the BLM must end cash incentives for adoption and pursue non-cash incentives to pursue “alternative, non-cash incentives to ensure a high standard of welfare for adopted wild horses and burro support quality adoptions,” pursuant to a unanimous recommendation by the BLM Wild Horse and Burro Advisory Board.

Below are the BLM’s planned actions and the shortcomings of each.

BLM's behavior contradicts its statement that it values informed engagement. In fact, the agency has ignored its obligations under federal law to provide opportunities for informed engagement by failing to undertake any notice-and-comment rulemaking as required by the Administrative Procedure Act or any environmental analysis under the National Environmental Policy Act.

Further its limitation of  stakeholder groups to those “with an interest in helping advance the goals of the Wild Horse and Burro Program” is vague and appears to exclude those organizations like AWHC seeking to reform the BLM’s unsustainable wild horse and burro management program.

It is notable that the BLM has declined to engage with AWHC and our rescue partners Skydog Sanctuary, Evanescent Mustang Rescue and Black Hills Wild Horse Sanctuary, despite the expertise in rescuing mustangs in kill pens and the mounting evidence we have presented to the agency of fraud and abuse within the AIP. For example, the BLM has not, to date, sought to conduct a transparent, thorough or independent investigation of the compelling evidence contained in AWHC’s May 2021 investigative report that the program was being abused by adopters who are collecting the cash incentives then sending horses to slaughter auctions. The agency has not responded in any significant way to the legal petition submitted by AWHC and our rescue partners calling on the agency to end the cash incentive program despite support for this necessary course of action endorsed as well by nearly 30 members of Congress. Because of the urgency of the problem -- AWHC and our partners continue weekly to identify wild horses and burros sent through the AIP into the slaughter pipeline -- we have been forced to sue as a result of BLM's lack of engagement and failure to act.

“The BLM recently issued revised adoption application and agreement forms that contain clear and consistent language regarding the prohibition against adopting a wild horse or burro with the intent of selling or transferring it for slaughter or processing into commercial products. The new application and agreement forms are currently in use by the field and available online. BLM will be updating the Title Eligibility Letter with similar consistent language in the near future.”

In reality, the contractual language is essentially the same as before, except a change was made that makes it even more difficult for the government to enforce by adding a “knowingly” requirement. Now the government would need to prove that someone “knowingly” sold or transferred ownership to a person or organization that intended to resell, trade or give away the animals for slaughter or processing into commercial products.

“The BLM commits to solutions that will better enable field personnel to verify when potential adopters are not eligible to adopt under existing laws and regulations. The Wild Horse and Burro Program System – the central database that contains information on all animals and adopters – flags individuals who have been deemed ineligible to adopt due to a previous violation of Prohibited Acts outlined in the regulations (43 CFR 4770.1). The BLM will consider ways to make this database more readily accessible to specialists in field environments.”

The BLM is only making its existing system more accessible instead of expanding its screening system to identify adopters with ill intent. The agency is not utilizing background checks, including cases of animal neglect and abuse; it is only screening its database of people who have previously adopted horses. This does not address the documented problem of the AIP incentivizing adopters interested in financial gain. It continues to allow individuals like the unnamed adopter in the New York Times expose’ who was charged with assault in a horse slaughter deal gone bad to adopt BLM animals.

According to the BLM, the majority of AIP adopters are new adopters, and under these reforms, they will not be screened by the agency.

“Under current BLM policy, a BLM official conducts a compliance inspection of adopted wild horses or burros within one year (prior to the issuance of title). As a practical matter, most inspections are completed within six months of adoption. BLM will clarify policy to identify the earlier inspection time frame for animals adopted under the Adoption Incentive Program.”

Acting Director Culver recently stated in the BLM’s recent press release on the AIP reforms, “We will begin to make additional compliance visits post-adoption,” yet nowhere in the reforms listed on its website does the BLM state that it will conduct additional inspections. Instead, inspections will be conducted at six months “rather than” 12 months. This does not address the AIP adopters who send horses to slaughter auctions after title is transferred. It means that BLM will be issuing titles for animals without current information on their condition or even location. It allows the continuation of virtual compliance checks based on photos or video provided by adopters. This cannot take the place of onsite inspections.

It is inaccurate to state most inspections are completed within six months of adoption. FOIA records show that inspections are not conducted in a timely manner and many happen after the one-year mark before title transfer.

How will the BLM confirm that the animal(s) is still at the location and is still being cared for at the 12-month mark? Will the agency do two compliance checks? This seems unlikely given the statement that the BLM will be doing 6-month “rather than” 12-month compliance checks.

“The BLM requires certification of proper care and treatment by a veterinarian, extension agent, local humane official, or other qualified individual. For animals adopted under the Adoption Incentive Program, BLM will limit that certification to a licensed veterinarian (or BLM authorized officer) is required to receive incentive payments.”

This is ineffective because AWHC has documented cases in which a private veterinarian or a BLM officer has signed off on a compliance check for an animal(s) dumped into the slaughter pipeline. For example, all of the compliance checks for BLM burros adopted to Paoli, OK were signed by a private veterinarian. The burros were then later dumped at the Cleburne Horse Sale, an auction frequented by kill buyers.

“BLM mailed copies of the Federal Law Notice to over 750 livestock sale facilities throughout the United States in 2018 and is resending notices again in August 2021. Facilities are encouraged to post the notices in a visible area to inform sellers and buyers of their legal responsibilities should they come across a freeze-marked horse or burro. The notices are sent with samples of a Certificate of Title and Bill of Sale so operators can confirm the legal status of any animal that comes into their facility.”

Again this reform does not address the problem, which is horses and burros being dumped at kill pens after title is transferred and the second AIP payment is made. Additionally, posting of notices is meaningless without active and transparent enforcement of criminal penalties for selling an untitled wild horse or burro.

What facilities were these notices sent to? How many of the facilities were “new” or had not received this notice prior to July 2021? Are these facilities notified that many WHBs are now microchipped as well? Are they required to check for a microchip?

“When BLM is presented with evidence suggesting that an individual may have provided false information to the agency on an adoption application or agreement, agency law enforcement conducts an investigation and may issue citations or refer cases to the appropriate U.S. Attorney to determine if prosecution is warranted.”

The BLM has previously stated that it has no authority to enforce the adoption contract once title is passed, so this reform again does not address the AIP problem.

Additionally, the BLM should disclose how many cases it has referred for criminal prosecution, how many of those involved AIP animals and what action, if any,  was taken on the referrals.

“Current regulations governing the Wild Horse and Burro Program were last updated in 1986. A rule-making process begins with the publication of a notice of proposed rulemaking in the Federal Register, and the process includes an opportunity for public comment. The BLM remains committed to managing wild horses and burros pursuant to the Act and subsequent direction from Congress.”

AWHC supports the strengthening of protections for BLM wild horses and burros both untitled and titled, and agrees that a rule-making process that includes NEPA analysis and public comment, is required. However, BLM’s current “reforms” do not offer any assurance that the agency will in fact undertake these required processes.

Federal law required BLM to undertake a rulemaking process under the Administrative Procedure Act, accompanied by an environmental analysis under the National Environmental Policy act, before creating and implementing the AIP. These mechanisms are how Congress ensured that agencies must involve the public in agency decision-making, and must consider alternatives to proposed actions. Because BLM did not undertake these processes required under federal law, the AIP is unlawful. BLM’s statement that it will merely “evaluate” changes to its regulations completely fails to correct the legal violations associated with the creation and adoption of the AIP.