The Warm Springs Herd Management Area (“HMA”) Roundup completed on October 23, 2018. The Bureau of Land Management (“BLM”) rounded up and removed 846 horses, 41 burros, and 2 mules. The agency reported that 32 horses died during this roundup.

The Warm Springs HMA Roundup is the first step in the implementation of the BLM’s Spay Feasibility Study. The goal of the roundup was to remove 100% of the federally-protected wild horses that live in this HMA. Now, with 846 rounded up, the agency has ceased the helicopter roundup operations.

Next, the BLM will begin to sort all of the captured wild horses; burros will not be part of the spay study. 270 federally-protected wild horses will be selected for the study. The BLM plans to release 200 wild horses back to the range in two separate herd management groups. Both groups will have a skewed sex ratio of 50 stallions and 50 mares. The control group will include 100 horses without any fertility control. The study group will include roughly 34 surgically spayed mares, spayed by the barbaric procedure of ovariectomy via colpotomy. Then, the remaining 70 mares will be spayed by the same inhumane procedure simply for statistical analysis. As a reminder, the mares chosen to be spayed will be in three stages of pregnancy and will suffer complications, will likely abort their foals, and may die as a result of the procedure. Go here for more information on what the BLM has planned for these mares.

American Wild Horse Campaign, Animal Welfare Institute, and The Cloud Foundation are currently involved in a lawsuit to keep these inhumane procedures from ever occurring. Our legal team will be in Portland, Oregon on November 2, 2018 to argue in support of our Preliminary Injunction which demands that the BLM be kept from performing the procedures. We will keep you updated as the case develops.

DETAILS OF THE ROUNDUP

On October 8, 2018, AWHC and AWI sent a complaint to the BLM Oregon-Washington State Director in response to reports early in the roundup that a foal had died from capture shock. The agency did not respond to our request.

Now, at the close of the roundup operations, 32 federally-protected wild horses have died. AWHC has submitted a Freedom of Information Act request to acquire those death records and get to the bottom of why so many horses were killed during this roundup operation. We will update you when we receive a response to that request.

Some of the more troubling reasons that the agency reported wild horses were euthanized included a particular condition - “angular limb deformity” – which was used as a pretext for killing 13 wild horses. This condition is “… indicated by club feet, severely overgrown hoof walls, collapsed heals, limb deformity, arthritic joints, toes pointed out at the fetlock, and lameness.” But these conditions are common and typically result in only insignificant impacts on horses. Indeed, many domestic horses survive and even thrive with these conditions, and they do not justify the killing of these wild horses. The agency also killed a three-year-old because the animal supposedly had arthritis in its knee. At that age, it would be highly unusual for a horse to have arthritis, strongly suggesting that BLM used that determination as an excuse to end the life of an otherwise protected horse. Finally, another foal died as a result of capture shock before the end of the roundup. The exact method the agency used to “euthanize” horses remains unknown, as the agency will not permit the public to see or know how it kills these animals and refuses to publish any veterinary reports online.

Wild horses can usually live long and fulfilling lives with the deformities such as those that BLM states as a reason why it must kill many of our federally-protected wild horses. For example, the Fish Springs Wild Horse Alliance has followed a wild mare who, during her first few months of life, likely sustained an injury to her front left leg near her fetlock. The mare has spent years compensating successfully with the “deformed" appearance of the healed injury. The group has seen the mare take the lead in her band, gallop across the range, lay down and get up without problems, and function normally and without pain most days of her life. To dispose of this mare would be of great loss to her family band and to the range as a whole. 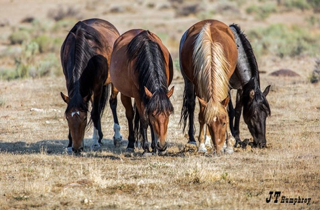 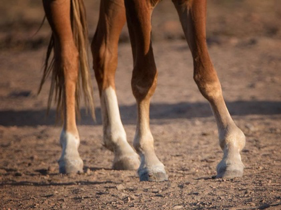 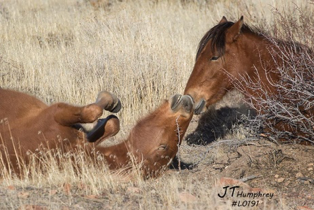 In 1971, Congress enacted the Wild Free-Roaming Horses and Burros Act declaring that “wild horses are living symbols of the historic and pioneer spirit of the West.” 16 U.S.C. § 1331. Congress declared that BLM shall “protect and manage wild free-roaming horses and burros as components of the public lands,” and provided that “[a]ll management activities shall be at the minimal feasible level.” 16 U.S.C. § 1333(a). The application of “euthanasia” for conditions that are far from life threatening, is a clear violation of the minimal feasible level standard and runs counter to the clearly expressed desires of Americans.

For the BLM to claim it must “euthanize” a horse, it has to follow the American Veterinary Medical Association euthanasia guidelines (2013), which it has clearly failed to do so by failing to keep the best interests of the animals at the forefront at all times. BLM has clearly refused to do so during this roundup as seen by the inhumane euthanasia of wild horses in large numbers and based on insignificant and survivable conditions. Again, wild horses can usually live long and fulfilling lives with the deformities that BLM now routinely uses as a pretext to kill many federally-protected wild horses.

AWHC believes that the means by which and the volume at which BLM has chosen to kill wild horses is in violation of the policies and laws that require the agency to manage our wild horses humanely. We want the American public to know that we are watching the BLM very closely and are working to get answers and hold the agency accountable for this inhumane management.