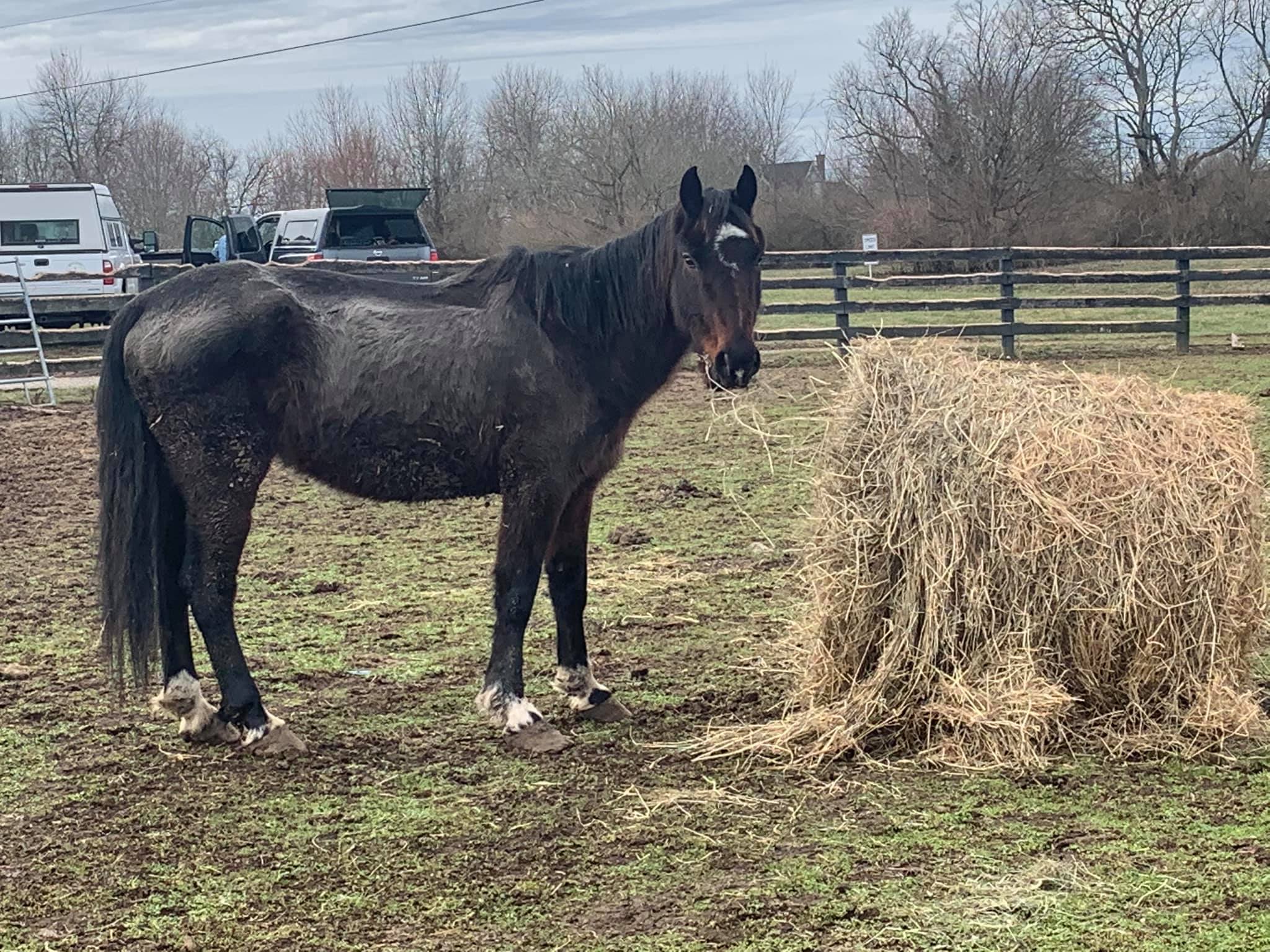 (March 9, 2020) While the BLM is justifying massive roundups and removals based on claims that mustangs are starving and dying of thirst on Western public rangelands, almost 20 severely malnourished and dehydrated as well as dead mustangs were discovered in Boyle County, Kentucky.

Responding to an anonymous tip, on Monday, February 17, 2020, Boyle County Animal Control and the Kentucky Department of Agriculture found 18 emaciated horses owned by Melanie Logue who was leasing a barn in Danville, Kentucky. Two horses were found dead, and two were later euthanized. All but one was a BLM mustang. 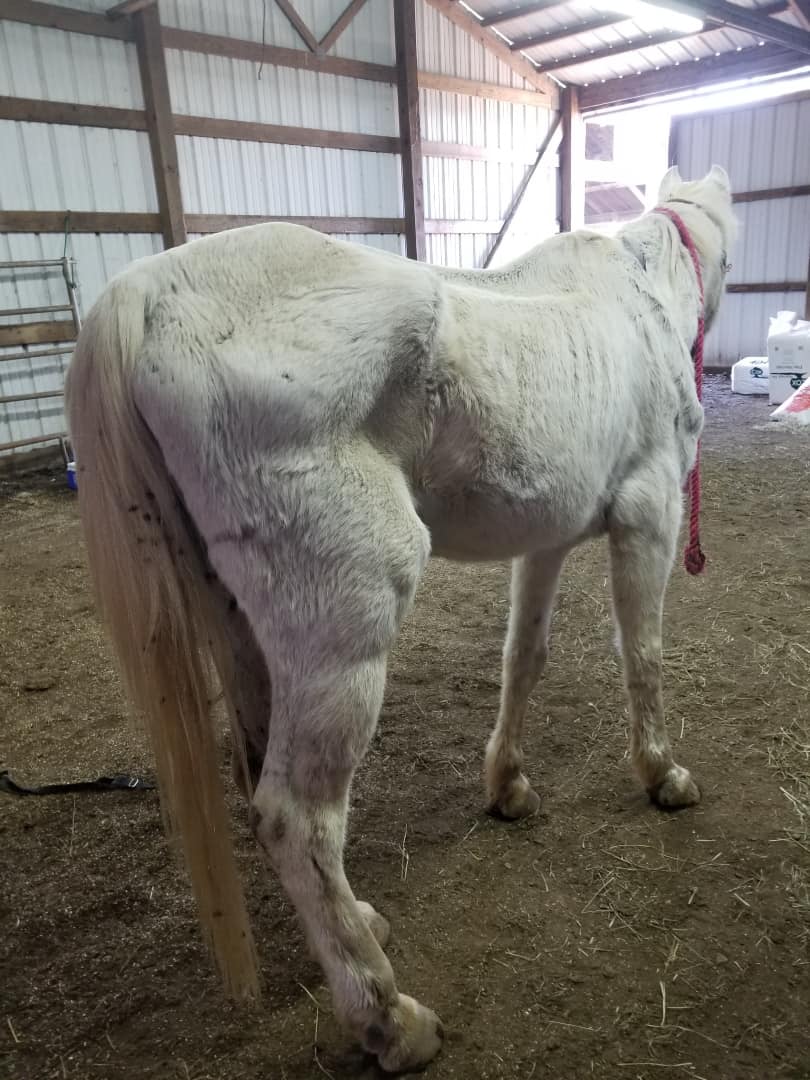 According to multiple reports, most of the mustangs were locked in stalls, blanketed, and standing in over a foot of manure. A few others were left in a pasture with no grass or hay and bark chewed off all the trees.

Days later, investigators found 23 more horses, owned by Jennifer Bayne-Donnell, in equally deplorable conditions in another barn at the same location. One is a mustang; the others are predominantly Saddlebreds and Arabs. 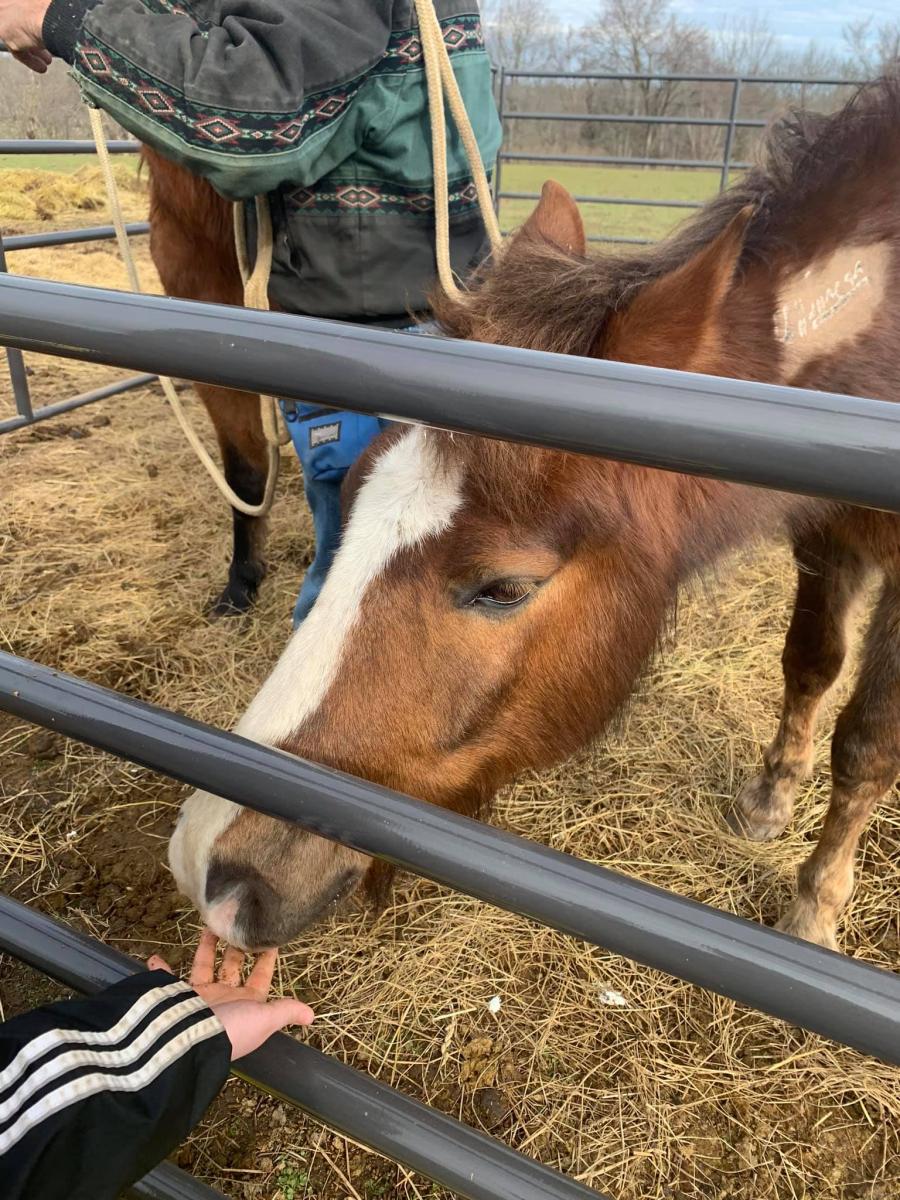 Ms. Logue was charged with 18 counts of second-degree animal cruelty and two counts of failure to dispose of carcasses within 48 hours. She was scheduled to appear in court on March 3rd but did not show up because the warrant was delivered to the wrong address. A new court date was been scheduled for March 10th.

On Facebook and other venues, Ms. Logue and her minor daughter identify themselves as specializing in training mustangs and participated for many years in the Mustang Heritage Foundation’s (MHF) Extreme Mustang Makeovers (EMM) and Trainer Incentive Program (TIP).

In fact, between January 23-25 of this year, Ms. Logue accompanied her daughter to the EMM in Fort Worth, Texas to compete in the Youth Division with a one-year-old filly.

At the same time, Ziggy, a three- or four-year-old filly whom Ms. Logue’s daughter competed in the 2018 Mustang Heritage TIP Challenge in Georgia, was abandoned in a stall at the Kentucky barn. She was one of the two horses found dead by investigators. Her decaying body had to be dragged out of the stall.

Ms. Logue acquired most of the mustangs by either adopting or purchasing them through BLM or MHF programs. Three of them were not titled, so the BLM took possession of them and placed them in foster care with a TIP trainer. The other mustangs are under the care of the Danville-Boyle County Humane Society until the court determines their fate.

In response to AWHC’s request for additional information on Ms. Logue’s mustangs, the BLM directed us to file a request through the Freedom of Information Act, a very lengthy process. Further, although it was reported that the BLM conducted a compliance check in August 2019, the agency has yet to confirm that. Photo at left by April Stark.

The BLM and MHF’s Responses 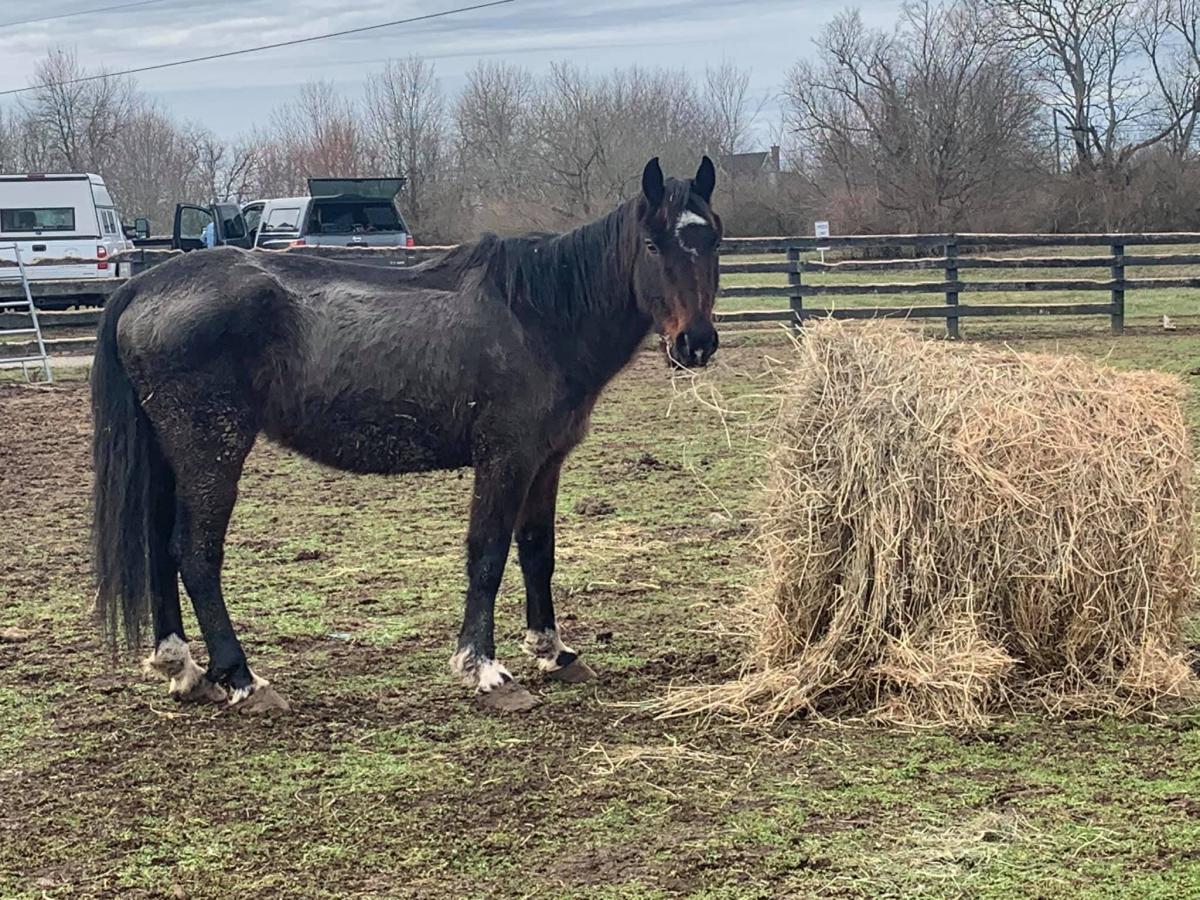 In AWHC’s email exchanges with the BLM and MHF, both express regret over the abuse – and deaths –of the Danville mustangs. However, neither accept any responsibility for it.

For example, except for repossessing Ms. Logue’s three untitled mustangs, the BLM will not assist in rehoming any of her titled mustangs because they are no longer “subject to BLM jurisdiction.” In other words, out of sight, out of mind.

The MHF is taking a similar hands-off stance for the mustangs involved with its programs, explaining that the nonprofit foundation,

Furthermore, neither the BLM nor the MHF intends to take a step back and re-evaluate their policies or practices to prevent similar mistreatment in the future.

Regarding its relationship with the MHF and its compliance checks and investigations/oversight efforts, the BLM stated,

"It’s important to note that the alleged abuse/neglect that occurred here was committed by an individual. BLM’s policies/practices and our partnership with MHF were not factors in the actions this individual allegedly took or failed to take. BLM responded swiftly using every resource and authority at our disposal to protect the public’s interest in this case, as we do in any case where individuals put the public’s interest at risk."

Regarding the selection process for its trainers, the MHF responded that “the individuals in question were not active participants in any MHF programs at the time of this incident. Our screening process is very thorough and we preclude any individuals from participation that have a history of animal neglect or abuse.”

Photo at left by April Stark.

But both are, well, wrong.

Although it’s true that only one individual, Ms. Logue, should be held accountable for the horrendous treatment of her mustangs, such abuse is not an isolated case, Last year alone, 24 BLM mustangs in Georgia and another 4 in Massachusetts were seized due to starvation and neglect.

That the BLM persists in rounding up and removing thousands of wild horses each year – despite the majority of the American public opposing such inhumane management – then dumping them through its $25 Sales Authority Program and $1,000 Adoption Incentive Program makes the agency complacent by increasing the likelihood of cheap or free horses ending up in bad situations, including kill pens on the way to slaughter.

Equally important, it appears that the BLM law enforcement branch is woefully inadequate. Only one special agent, for example, is assigned to the whole Eastern States, and his responsibilities are not limited to investigating wild horse and burro complaints. 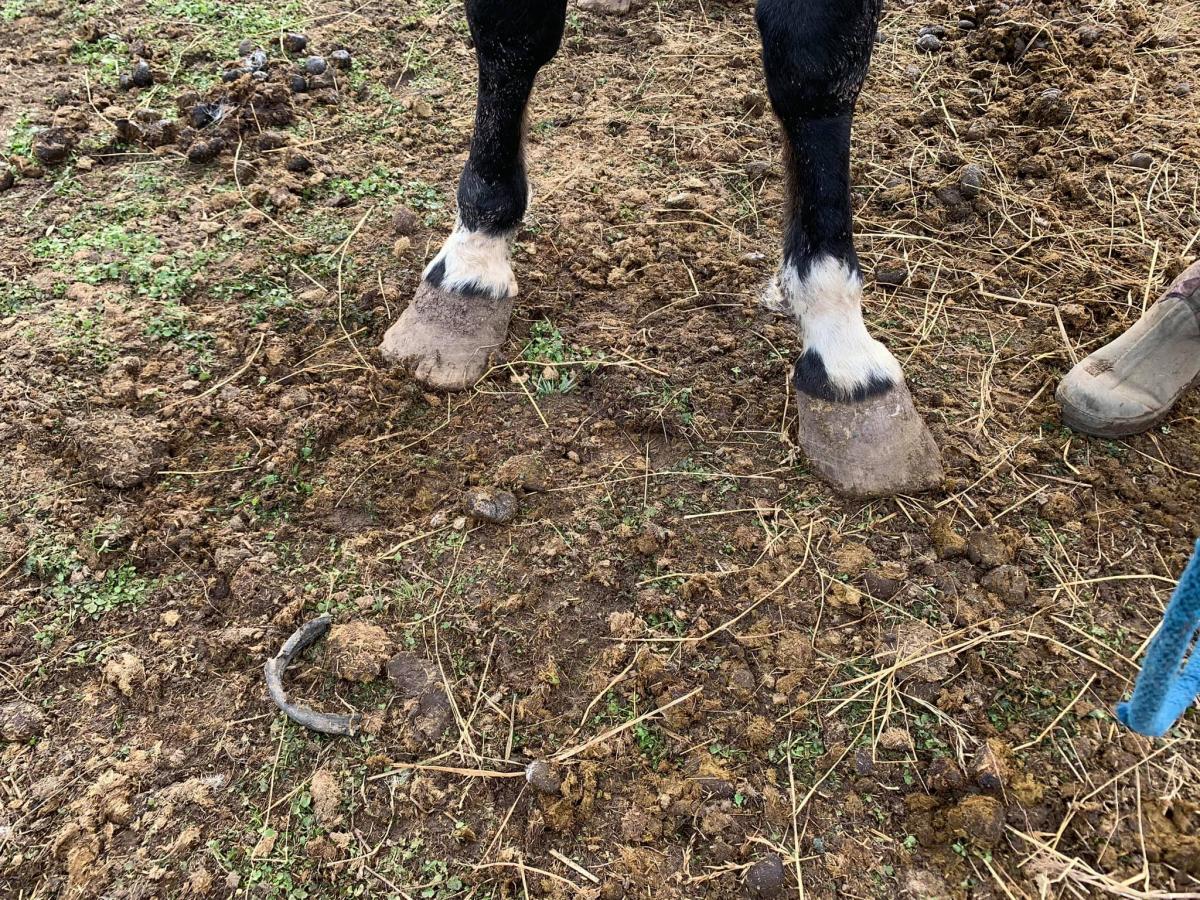 And the MHF seems to have forgotten that Ms. Logue’s daughter was competing in the January EMM in Texas at the very same time that their other mustangs were literally starving to death back in Kentucky. Therefore, Ms. Logue and her daughter are, indeed, active participants in an MHF program.

On its website, the MHF boosts of adopting 9,414 BLM mustangs and having 3,000 trainers take part in its EMM and TIP programs. It has no formal system to track or follow up on the horses; instead, it encourages its trainers “to stay in touch with their adopters post-adoption.”

According to the MHF, its screening process for trainers includes reviewing their backgrounds, references, and facilities when they apply to a new EMM or want to renew their status as a TIP trainer which is required on an annual basis. Once approved, all EMM trainers are required to submit a progress report along with photos of their mustang in training at 7 days, 45 days, and 90 days after pick-up

Such procedures are designed to ensure that the MHF is evaluating the trainers’ overall eligibility. But apparently something went drastically wrong when it came to determining Ms. Logue and her daughter’s suitability for participating in the MFH programs – and particularly this year’s EMM in Fort Worth, Texas.

So far, there is no word if the BLM will pursue federal charges against Ms. Logue. The MHF is “actively monitoring the situation and will determine [its] course of action following the completion of the investigation by the authorities.” 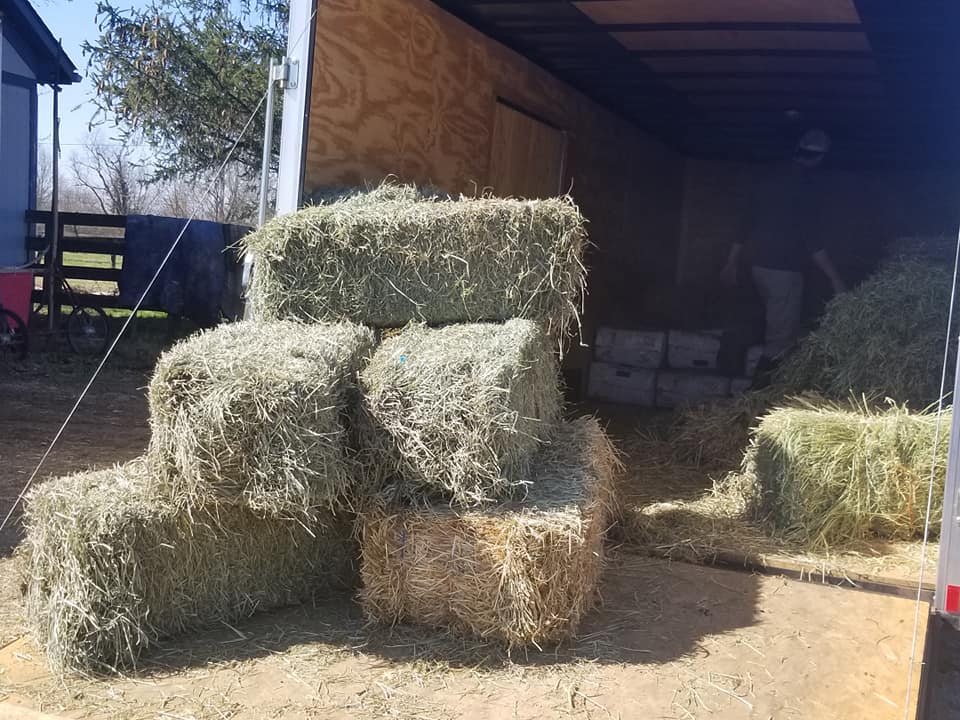 Since the discovery of the horses at the leased barns, the equine community in and around Danville, Kentucky including TIP trainers and other mustang owners, has rallied to support the Danville-Boyle County Humane Society in what some describe as the worst case of animal abuse in Boyle County.

Volunteers are spending endless hours feeding, mucking stalls, and caring for the horses, including treating them for lice and trimming badly overgrown hooves. Trailer loads of hay and shavings have arrived, a local feed store is providing discounted supplies, and numerous fundraisers have been organized to help cover the immediate and long-term expenses for the horses.

But more assistance is needed as seizure cases frequently take a long time to resolve, and the costs for rehabbing the animals falls to local animal control and shelters.

Anyone interested in making a donation for the Danville mustangs and other horses can send a check directly to the Danville-Boyle County Humane Society, P.O. Box 487, Danville, KY 40423-0487 (include “Boyle County Horses” in memo line) or visit a GoFundMe page at https://www.gofundme.com/f/boyle-county-equine-rescue-amp-care?utm_source=customer&utm_medium=copy_link-tip&utm_campaign=p_cp%20share-sheet&fbclid=IwAR1LhWfs4KdJS4B8LdBzPIM025_ZntQXVN4DRn3xqqp-KgkrEaWRqNgM5Sk

No horses are available for adoption at this time; however, foster applications – if and when the court releases the horses – can be found at the following link and emailed to April Stark at acassedy05@hotmail.com: https://americanmustangtrainersassociation.org/boyle-county-ky-foster-a…

Last December, Congress authorized a 25% increase – or $21 million – for the BLM’s broken Wild Horse and Burro Program, and the Trump Administration recently asked Congress to approve an additional 15% budget increase – $15.3 million – that will be used to fund the roundups of wild horses and burros in unprecedented numbers, with as many as 20,000 at risk of being removed this year alone.

Further, the Path Forward, a misguided plan submitted by the National Cattlemen’s Beef Association, the American Farm Bureau Federation, the American Mustang Foundation and other agribusiness lobbying groups, and animal welfare organizations, including the Humane Society of the United States the ASPCA, and Return to Freedom, is calling for up to the BLM to remove up to 130,000 horses and burros from public rangelands over the next 10 years. A key component of the plan is its supporters helping the BLM adopt the horses and burros into private homes. 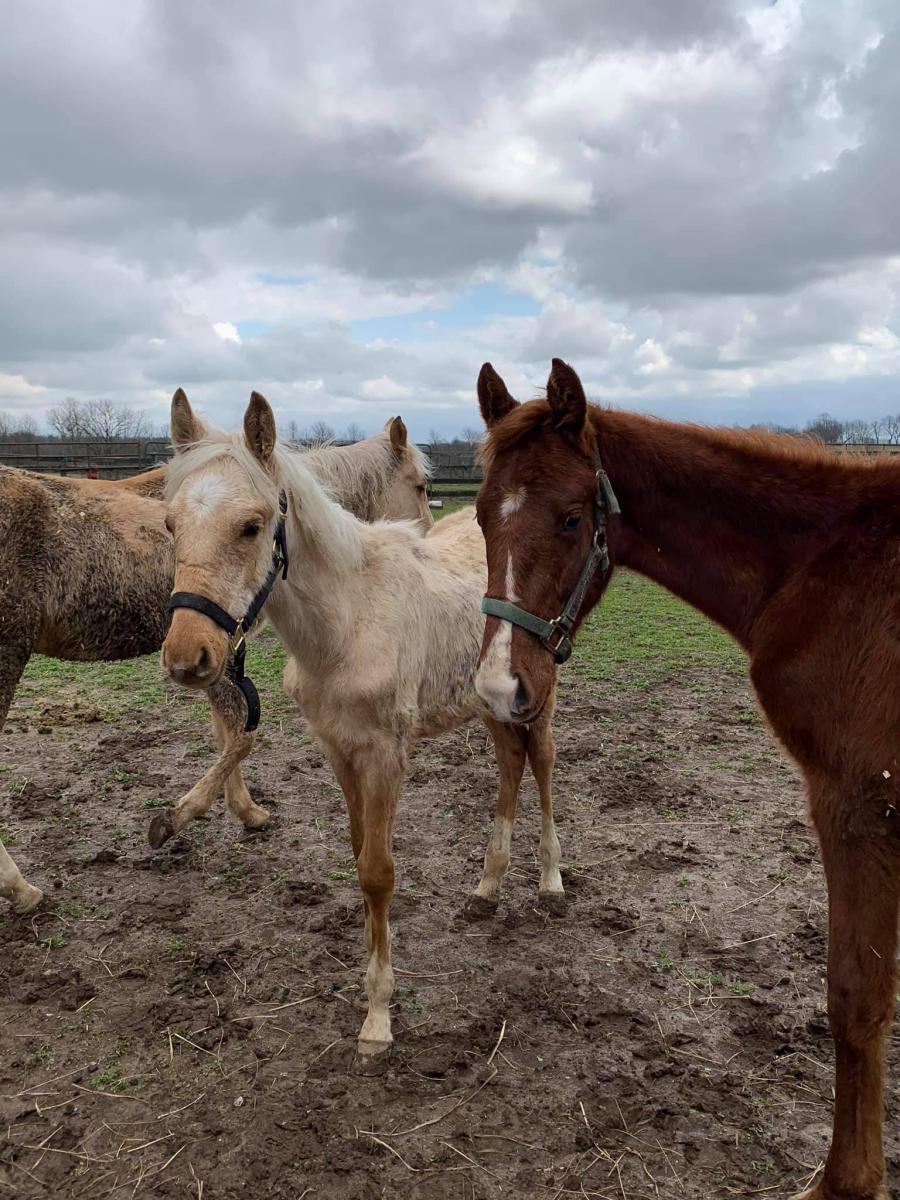 So, the million-dollar (or dollars!) questions are 1) what will the BLM – and supporters of the Path Forward – do to ensure that more horses and burros do not meet the fate of the Danville mustangs and 2) how much of the additional funding will the BLM allocate to improving oversight of adopted horses and burros by, for example, hiring more staff to conduct compliance checks before an adopter is awarded a title or more special agents who are dedicated to investigating complaints and concerns about BLM wild horses and burros.