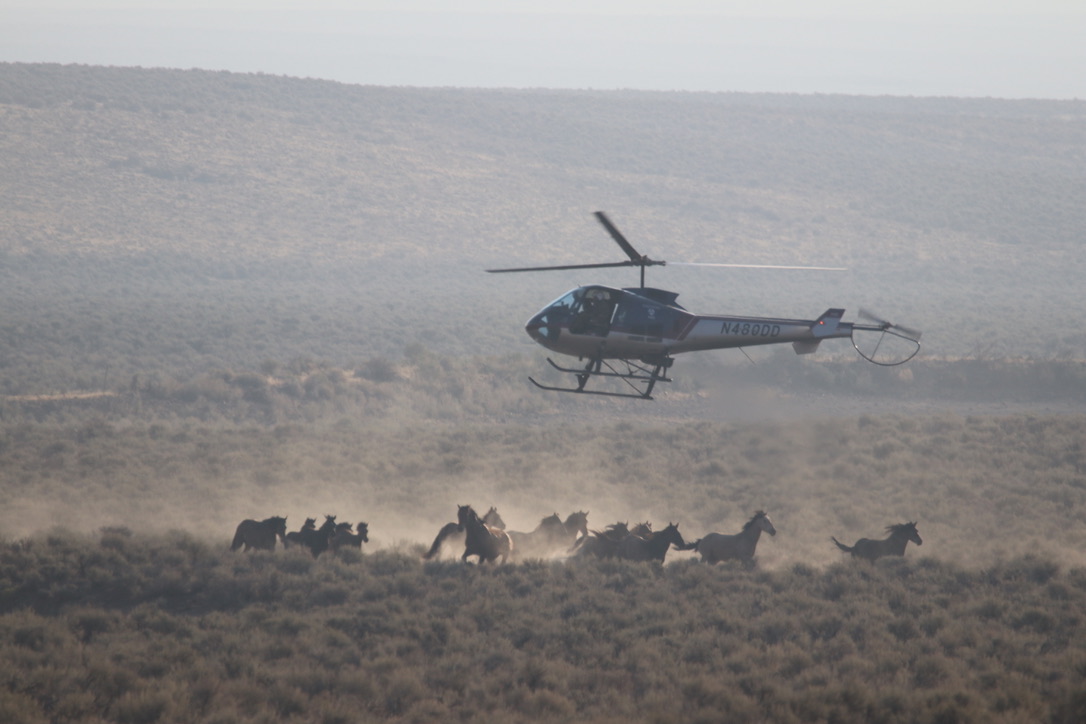 ROCK SPRINGS, WY (Sept 27, 2021) —  The nation’s leading wild horse advocacy organization, the American Wild Horse Campaign (AWHC), harshly criticized a plan recently announced by the Bureau of Land Management (BLM) to destroy an iconic population of wild horses living in a 3.4 million acres habitat in the “Wyoming Checkerboard” in the southern part of the state, beginning in October.

The BLM’s plan would permanently remove 3,555 wild horses—or nearly 50 percent of the state’s total wild horse population—making this the largest wild horse roundup and removal operation in the Program’s history.

AWHC charged that the agency is ignoring the wishes of the public and harming an important ecotourism resource for the area.

AWHC charged that the agency is ignoring the wishes of the public and harming an important ecotourism resource for the area. According to Rock Springs City council member, Tim Savage, the wild horses present a critical tourist draw to the small town. "This is not a management plan but in fact, an eradication plan", said council Member Savage.

In 2013, the BLM entered into a consent decree with the Rock Springs Grazing Association (RSGA) agreeing to remove all the wild horses from private lands on the Checkerboard and to consider “zeroing out” most of the wild horse populations in this area — a controversial idea that is currently under review by the agency.

However, AWHC points to a U.S. Court of Appeals Tenth Circuit ruling that the BLM is not required to remove wild horses from public lands just because their populations exceed outdated population limits. The organization says there is no logical reason the agency cannot reduce the number of horses to be removed, at minimum, to maintain the high end of its imposed population limits (AMLs). According to the group, this action alone would leave 613 more wild horses on the range saving taxpayers as much as $30 million in costs to round up and warehouse for life in government holding facilities.

“The public lands in this area belong to all Americans, not just the livestock operators who receive steep tax subsidies to graze their cattle and sheep here," said Suzanne Roy, executive director for AWHC. “All Americans should have a say in the future of these lands, which have been designated as habitat for federally-protected wild horses in the state.”

“The removal of 3,555 wild horses from 4 million acres in the largest roundup in history is a clear example of the Bureau of Land Management's race to remove as many of these animals from our public lands as possible with no consideration for the very uncertain fate that faces them,” said wildlife photographer Carol Walker. “Our wild horses belong on our public lands, wild and free with their families, not in long-term feedlots or dumped at kill auctions by greedy and heedless adopters.

The BLM’s plan for the horses would reduce their numbers to 1,550 on 3.4 million acres of land — a density of 1 horse per 2,217 acres. This population limit was established based on the allocation of 91% of available forage in these areas to cattle and sheep, privately owned by the Rock Springs Grazing Association.

In addition to the removal, the BLM plans to further decimate the populations through indiscriminate use of population growth suppression techniques. While AWHC supports the use of the PZP fertility control vaccine, it opposes the BLM’s plan to use IUDs due to a lack of evidence regarding its safety in wild horses. Among the populations that would be dramatically reduced are the wild herds that live along the Pilot Butte Wild Horse Scenic Loop outside Rock Springs, which are heavily promoted by Sweetwater County as evidence that “the American spirit still thrives” in Wyoming.