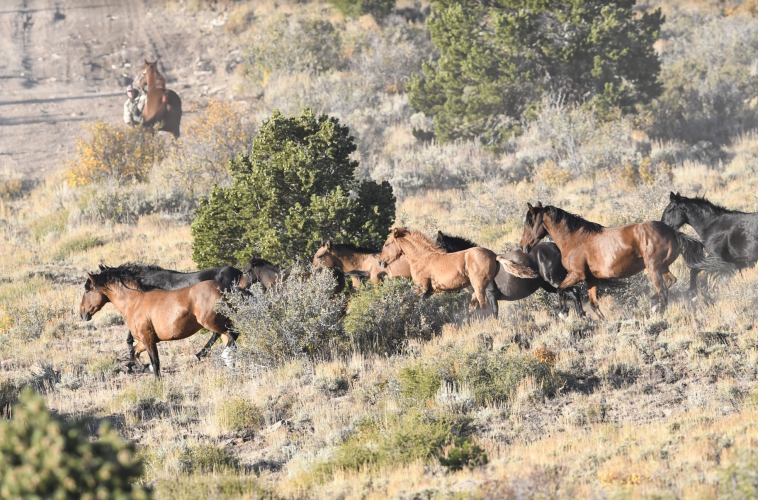 On September 26, 2019 the BLM began a roundup and removal of approximately 200 wild horses from Federal, State and private lands. The first several days of the operation were closed to public viewing as the trapsite was located on private lands and the property owner refused permission.

The appropriate management level for this HMA is 75-125 animals and the current population is estimated to be 282 horses on 83,410 acres. Horses removed from the range will be transported to the Axtell Off-Range Contract Wild Horse Facility in Axtell, Utah.

October 2, 2019: AWHC's representative was one of two members of the public in attendance. 14 horses were captured and there were no deaths. The roundup concluded with 154 horses captured, and 1 death.

Just like days prior, each time runs of horses would come in the mustangs would stop, attempt to escape (sometimes successfully) or back up. The first time this occured, one of the horses fell on its back as it jumped the jute and rolled around for several moments. The second time this happened the horses jumped a little further back from the entrance and headed up hill.

The contractors said the reason the horses were escaping the trapsite was due to lack of opportunities for trap placement and the rugged terain. We have not attended many roundups where this was a regular occurance when bringing horses in.

Horses came off the range predominantly in body condition of 4, healthy wild horses. There appeared to be ample forage available in all directions.

Likely since this was going to be the last day of the roundup, they did not unload the horses into the temporary holding and then onto larger transport trucks as they had done days priors. Instead, horses were kept in smaller horse trailers to be shipped to the Axtell holding facility.

October 1, 2019: AWHC's representative was one of five members of the public in attendance. 22 horses were captured and there were no deaths. Total number of horses captured so far: 140.

On the first run this morning, an event happened very similar to yesterday's first mishap: horses approached a point in the funnel where the jute appears to be jutting in several feet from the right and the horses stopped, started to turn back, and then jumped over the jute fence into freedom. On subsequent runs, the horses approaching this same spot, stopped, and began to turn back. To resolve this issue, the helicopter follow the horses further into the trapsite than normal. No correction was made to the jute or the pen in this area.

September 30, 2019: AWHC's representative was one of six members of the public in attendance. 12 horses were captured and there was 1 death. Total number of horses captured so far: 118.

There were only three runs today. The first time the helicopter tried to capture a band of at least 16 horses into the trap, chasing them down the funnel, they did not make it to the pen. It is unknown what happened, but the horses spooked when within about 200 feet of the pen (about 1/3 of the remaining distance), turned around, some jumped into the burlap fence (no injuries from that - the burlap seems safer than other materials), and then ran out. All horses successfully escaped. To correct the issue of horses easily escaping once near the pen, the contractors paused operations to extend the length of the burlap funnel, more than doubling its length.

The helicopters successfully then captured 8 mustangs including 1 foal. The final attempt brough in 4 horses which included two foals. 12 mustangs were captured before the roundup was called, in part due to high winds. There was one death - a foal from the second group suffered a broken neck after two agitated and confused horses slammed into it up against the pen once they were inside. We were told by BLM the foal died instantly.

A comment about the trapsite: The pen size was only the width of the dirt road, actually a little less to accommodate a side pen for the three Judas horses; it did not seem to extend very deep. This is a very small pen in comparison to the pen used in the Onaqui round up; the pen used today does not give the horses much room to slow down their pace once inside. Perhaps this cramped enclosure without enough room to slow down contributed to the death of the foal.

September 29, 2019: On the first day of the roundup on public lands, AWHC's representative was one of four members of the public in attendance. No horses were captured due to high winds and the operation was called off early.

The meeting time for the roundup was at 5:30 a.m., before the sun came up. The drive to get to the trapsite is on extremely rugged mountain terrain; steep hills and cliffs, large rocks, boulders, trees. The BLM caravan that our Representative was following was traveling at speeds that were considered very dangerous. Members of the public were traveling in the pitch black, while dust kicking up so much that at times there were white-out conditions (from lead car and wind storm), our vehicle fish tailed a few times on the silty road (despite brand new tires), and there were moments where the road is 1 foot away from a straight cliff drop off (see attached photo taken in daylight).

Dangerous terrain on the way to the trapsite.

The helicopter contractor's horses known as "Judas" horses. They are trained domestic horses that are released as mustangs near the trapsite to lead them in.

September 28, 2019: According to BLM, 34 wild horses (8 stallions, 22 mares, 4 foals) were rounded up and removed from the Range Creek HMA. Horses were reported to be in body condition of 4's. No member of the public were present as the operation was being conducted on private land.

September 27, 2019: According to BLM, 9 wild horses were rounded up and removed from the Range Creek HMA. Horses were reported to be in body condition of 4's. No member of the public were present as the operation was being conducted on private land.

September 26, 2019: According to BLM, 63 wild horses were rounded up and removed from the Range Creek HMA. Horses were reported to be in body condition of 4's. No member of the public were present as the operation was being conducted on private land.