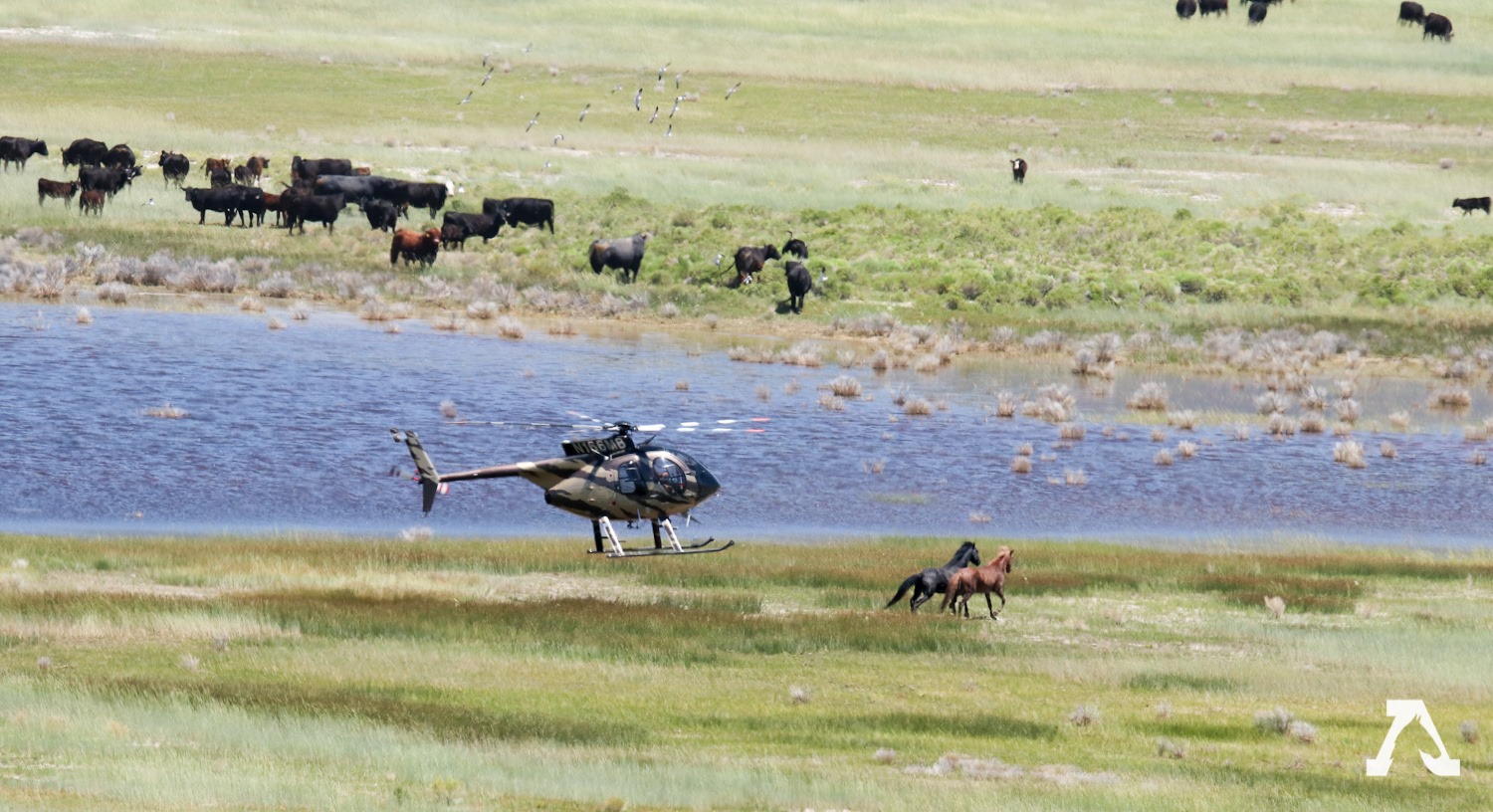 In remote eastern Nevada, a familiar tragedy is unfolding. Government contracted helicopters are descending on vast, 1.6 million-acre expanse of public land known as the Triple B Complex, where an estimated 3,000 federally-protected wild horses live. The goal of the roundup is to remove up to 800 of these iconic mustangs from their natural habitat in an effort to reduce the wild horse population on rangelands where approximately 7,300 privately-owned cattle or 36,000 sheep are authorized to graze either wholly or partially within the wild horse Complex each year. Powerful ranchers, like the Goicoechea family (State Senator Pete Goicoechea and his son Nevada State Veterinarian JJ Goicoechea) hold permits to graze their livestock on our public lands in the area at vastly below market rates that are subsidized with our tax dollars.  The more political clout these federally-subsidized ranchers have, the more likely they are to secure large wild horse roundups on the public lands where their livestock graze.

Today our field representative was one of approximately eight members of the public onsite at the operation. The public viewing area was set back approximately one-mile from the trapsite where the horses enter. Our field representative relayed that a few of the helicopter runs came in from far distances, oftentimes hearing the helicopter for upwards of an hour before horses visibly came into view.

On a separate note, the Triple B roundup is proving that the rancher claims of wild horse overpopulation and mass starvation are patently false. In Triple B -- an area that is the focus of complaints about wild horse "overpopulation," the horses being rounded up are extremely fit and healthy and their habitat is visibly green and lush with abundant forage. Possibly as an attempt to compensate for the gap between the claims of overpopulation and the reality on the ground in Triple B, the BLM attributed the three deaths that occured on day 1 of the roundup to "Pre-existing condition, starvation, emaciation and weakness." By the next day, as reports of the roundup were published online and charges of starving horses were directly contradicted by video and photographic evidence, the BLM changed its explanation of the deaths. Now the pre-existing conditions that prompted the BLM to "euthanize" the horses are attributed to a lost eye, broken leg, laceration.

The trapsite was moved today and the public viewing area was closer than the previous day, though was still located about 1/4-1/3 mile away from the trapsite. Our location allowed for visibility of the horses entering the trapsite, but tree cover prevented full visibility during most of the helicopter runs. At around 11:00 am, the tempature rose to 95ºF and the operation concluded for the day.

BLM's Comprehensive Animal Welfare Protocol states, "Horse captures must not be conducted when ambient temperature at the trap site is below 10ºF or above 95ºF without approval of the Lead COR/COR/PI".

For 30 minutes the helicopters focused on a group of just three horses, a mare and her foal and what looked to be a stallion. The foal dropped behind from the group, slowed down and disappeared from our camera's view. He appeared again approximately 30 minutes later when a wrangler on horseback rode out and roped him. They walked slowly with the exhausted foal back to the trap site which was a 20-25 minute walk.

The observation area was the same as it was yesterday and the viewing was abysmal at around 1.5 miles away from the trap site. The helicopter contractors ran horses from far distances, but the operation went smoother than the day prior. The day concluded early suggesting that they were not finding many horses and so the trap site was going to be moved to a new location for the next day.

Several horses evaded capture today. After reviewing our footage, one horse who got away looked to be badly injured though he/she was running okay.

In the first run of the day, a mare was was left on the range after her family was taken into the trap. She made her way towards our observation area, stopping just shy of 50 yards from us before heading into the adjacent hills. Whether she avoided capture the rest of the day is unclear.

The viewing location was moved today where our observation was improved - located about a half mile from the trapsite. Horses continued to be run from very far distances. An adult horse stopped during part of one of the stampedes and laid down seemingly from exhaustion. An exhausted foal had to be brought in via horseback. The temperature averaged around 92 degrees.

So far, 3 foals have been euthanized during this roundup because of "weak tendons" - something that our teams has never seen reported before. We sent an email to BLM today requesting that the agency allow our partner, Chilly Pepper Mustang Rescue, located in Golconda, NV, to take in foals and injured horses who will otherwise be put down at the roundup. Chilly Pepper specializes in critical care, and is highly qualified to provide the care needed to avoid euthanizing horses with conditions from which they could recover. At the time of this report, the BLM has not responded to our request.

AWHC was onsite to document the last day of the Triple B Complex roundup. 106 wild horses were captured and there were two deaths.

After being relentlessly pursued, the last 3 horses managed to avoid the trap and two of them escaped up the mountain near the observation area.

The other horse wondered towards the cattle that remained undisturbed.