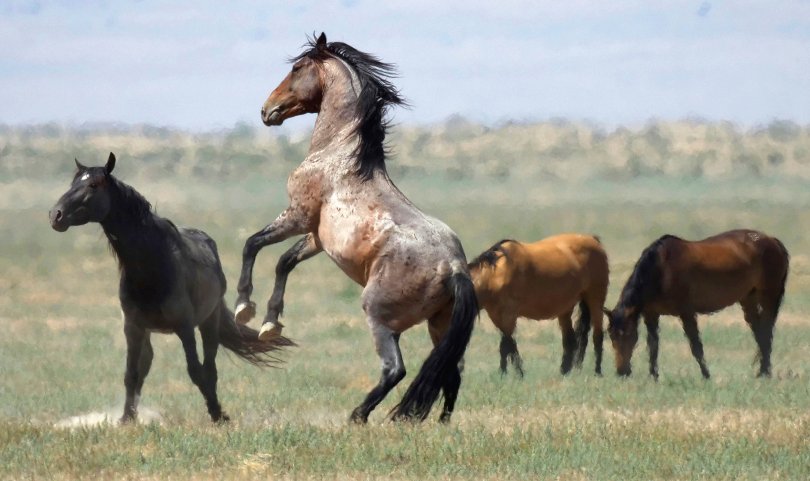 RENO, Nev. — Congressional Democrats are demanding the Interior Department produce an overdue report on plans to manage wild horses roaming federal lands in the West after the head of its public lands agency told reporters it will take $5 billion and 15 years to get overpopulated herds under control.

William Perry Pendley, acting director of the Bureau of Land Management, said last week he’s increasingly optimistic his agency will eventually be able to reduce the herd sizes through stepped-up roundups and increased use of fertility control on the range.

The department outlined a series of options in an April 2018 report that included those ideas as well as the possibilities of sterilizing horses, paying private parties to adopt them and again reviewing the controversial idea of euthanizing some animals.

But Colorado Rep. Joe Neguse and six other Democrats say that report provided few details. They said in a letter to Interior Secretary David Bernhardt that an update the department promised by July is three months late and they need it to chart the horses’ future.

“Each day, the number of wild horses and burros in the BLM’s care continues to grow both on and off the range,” Neguse wrote Thursday, noting there are an estimated 88,000 animals on the range in 10 western states and nearly 47,000 in government holding pens and pastures.

“It is clear the BLM’s current practice of rounding up wild horses and burros and warehousing them off-the-range is not addressing the population growth, and we urge BLM to release their plan for congressional review immediately,” he said.

Reps. Deb Haaland of New Mexico, Gerald Connolly of Virginia, Andy Levin of Michigan, James McGovern of Massachusetts, and Ro Khanna and Ted Lieu of California co-signed the letter, which also requests an analysis of the feasibility of assigning responsibility for the care of the animals to private, nonprofit entities. Haaland is chairwoman of the House Resources subcommittee on national parks, forest and public lands.

“This report is essential to the responsible development of the Wild Horse and Burro Program, to ethical and humane treatment of these animals and to Congress’ understanding and oversight of the bureau’s proposed methodologies — both in funding and practice — moving forward,” they wrote.

Pendley said he was encouraged by the fact the agency adopted out more than 7,000 mustangs and burros captured last year — the most in 15 years — which helps free space in overcrowded government corrals to accelerate roundups. His agency maintains that the range can sustain only 27,000 animals.

Pendley also cited an unprecedented coalition of animal welfare advocates and ranchers that has endorsed a comprehensive plan emphasizing short-term roundups and more fertility control. The Senate Appropriations Committee has approved a $35 million increase in the bureau’s horse budget to achieve some of those ideas as part of the Interior Department spending bill awaiting Senate approval.

“I know there is a sense of sincerity on the Hill about this issue,” Pendley said. “They want to try to solve the problem.”

The West’s oldest and largest mustang protection groups, which have long opposed roundups, condemned the latest package of proposals backed by a new alliance that includes the Humane Society of the United States, the American Society for the Prevention of Cruelty to Animals, the National Cattlemen’s Beef Association and the American Farm Bureau.

“This is an outrageous plan to spend billions of taxpayer dollars to clear the public lands of cherished wild horses and replace them with livestock subsidized by our tax dollars,” said Suzanne Roy, head of the American Wild Horse Campaign.

But ASPCA Vice President Nancy Perry said the group welcomes a “real investment in a future for America’s mustangs.”

“A preventive approach will save tax dollars, protect horses from lethal threats and provide our rangelands with free-roaming herds for future generations,” she said.

Originally posted by The Mercury News