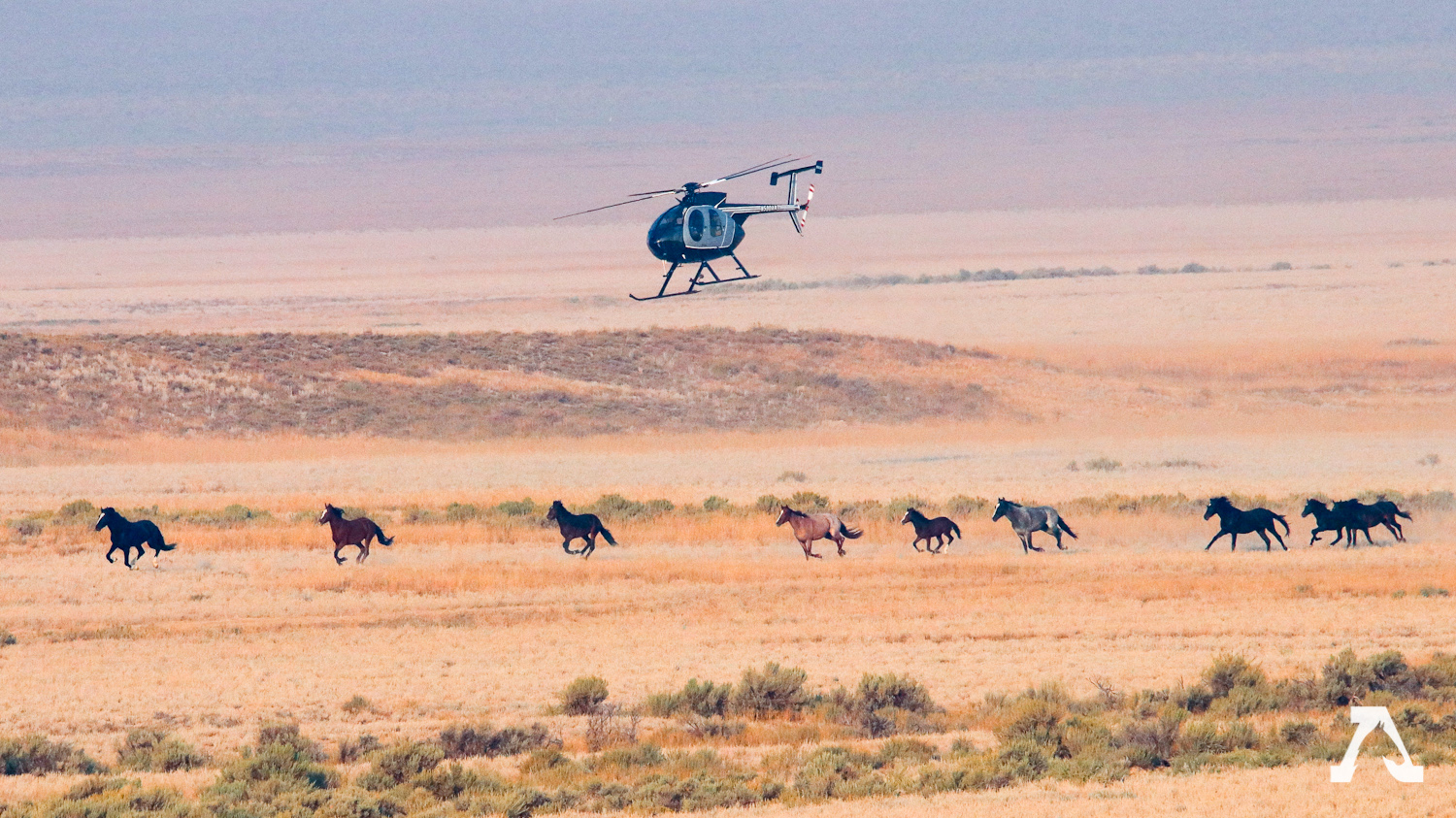 In June, the Bureau of Land Management (BLM) released its roundup schedule to remove 3,565 federally-protected wild horses and burros from public lands between the summer and fall. With the summer roundups complete, BLM began its fall schedule in full force, conducting three roundups simultaneously in three different states.

On September 5, 2019, the U.S. Forest Service began another roundup of approximately 500 California mustangs from the Devil's Garden Wild Horse Territory from within the Modoc National Forest in Alturas, California.

This latest roundup follows the controversial removal of 932 horses last fall, after which the agency announced its intent to the captured animals without limitation on slaughter. The plan provoked litigation and widespread opposition from the public and California political leaders including U.S. Senator Dianne Feinstein, Attorney General Xavier Becerra, U.S. Rep. Ted Lieu and 26 other members of the California Congressional delegation, and Assemblyman Todd Gloria and 27 of his California Legislative colleagues. In October, the American Wild Horse Campaign (AWHC), joined by the Animal Legal Defense Fund, filed a lawsuit to block the Forest Service from proceeding with its plan. AWHC also worked with Assemblyman Todd Gloria on legislation to better protect California wild and domestic horses from slaughter. The bill passed the Legislature with strong support and is awaiting the Governor's signature.

Under pressure from local ranching interests that seek access to cheap grazing on public lands in the Modoc, the Forest Service intends to reduce the wild horse population to between 206-402 in the Forest while authorizing over 3,700 privately-owned cow/calf pairs and 2,900 privately-owned sheep to graze for six months a year on the public lands there. Livestock operators have always claimed that there are as many as 4,500 wild horses living in the Forest but the recently released census by the United States Geological Survey released last month estimates that far fewer mustangs actually reside there. We believe that the Forest Service and livestock interest groups have been inflating horse numbers with the intent of securing tax dollars for roundups to remove most of the wild horses from the Modoc Forest.

Last year, AWHC offered to implement and fund a pilot fertility control project to humanely reduce population growth rates in the herd, as recommended by the National Academy of Sciences. However, the Forest Service rejected the offer.

On September 6, 2019 the BLM began the planned removal of 600 wild horses from the Fish Creek HMA within Eureka County, Nevada. This HMA is managed by the Mount Lewis BLM field office within the Battle Mountain District.  The goal of the roundup was to reduce the Fish Creek horse population to closer to the AML (population limit) of 107-180 animals set by the BLM. Initial planning for removal was 500 horses with an estimated population of 752 but an updated population survey from July 2019 increased the population count within and just outside of the HMA to 822 wild horses.  This change in estimated population increased the round up removal target to 600 horses with 550 to be removed and a select group of 50 horses would be released back into the HMA.

The Fish Creek HMA has a population that includes a small percentage of curly mustangs which possess a unique genetic curly coat which is being studied by Texas A & M for historical ties to early horse populations.  The selective release of the 50 horses was to target a portion of the curly coat group along with older horses that were in excess of 20 years old.  Mares selected for release would be treated with PZP fertility control including the Native and PZP 22 extended release version.

The helicopter assisted roundup concluded on September 15, 2019 with 558 horses captured, (213 Stallions, 242 Mares, and 103 Foals).  Due to the reduced capture count from the targeted 600 horses only 20 horses were allowed to be released.  This included 7 curly Mares treated with PZP and 13 Stallions including curly and older stallions. This was a significant reduction from the originally planned 50 horses to be released.  Five deaths were recorded with 3 from Chronic Pre-existing conditions and 2 young horses who suffered compound leg fractures from the roundup and were euthanized.

Noted progress: even though the total roundup target was not met and AMLwas not achieved (107-180 wild horses), the BLM did agree to release 20 horses.  The BLM did provide electrolytes at the capture site for foals to minimize impact of capture stress.  Effort was also made to move traps frequently to reduce the distance the horses needed to run into the trap site.  A humane PZP fertility control plan is also in the works, with planning for sustainable and humane population control a long-term goal. This may then make this the last round up we will need to report for this HMA.

On September 11, 2019 the BLM began a roundup and removal of approximately 200 wild horses from the famed Onaqui HMA in Utah. When the BLM first announced its intent to round up as many as 500 horses months ago, we consulted with our legal team to assess whether we had a viable lawsuit to stop the roundup. After a review of the documents, our team concluded that we did not have a legal challenge with a viable chance of success.

Instead we engaged the BLM in a dialogue aimed at truly creating change, and the BLM Utah team has been a willing partner in this conversation. For this roundup, we asked that the BLM leave the approximately 300 wild horses from the two distinct herds -- Davis Mountain and Simpson Springs -- that are approachable and whose members are individually known and identified. We asked that the BLM accept our offer of private resources to expand the existing fertility control program in order to vaccinate a sufficient number of mares to achieve zero population growth (births equal deaths) within 2 years and reductions in populations thereafter. We believe that this is the best way to achieve our mutual goal of eventually eliminating roundups in the Onaqui herd and ensuring that every Onaqui horse born wild gets to live and die wild and free.

The BLM ultimately made the decision to remove 200 wild horses, half of what its Environmental Assessment had analyzed. For this roundup, the agency agreed to limit removals to horses in outlying areas and on the Dugway Proving Ground Army base, where they are, unforunately, not authorized to live. Later this month, we will be sending a darter to assist with vaccinating mares, and we have been working with Sam Couper of Onaqui Catalogue to create a comprehensive internal database for the program that tracks each individual horse, their unique markings and color, their social afilliations, their location, lineage and offspring.

Our hope is that the remaining wild horses of the Davis and Simpson herds can remain in the Onaqui HMA and be successfully and humanely managed with fertility control. We have committed our resources to helping the BLM and Wild Horses of America Foundation make this program a success.