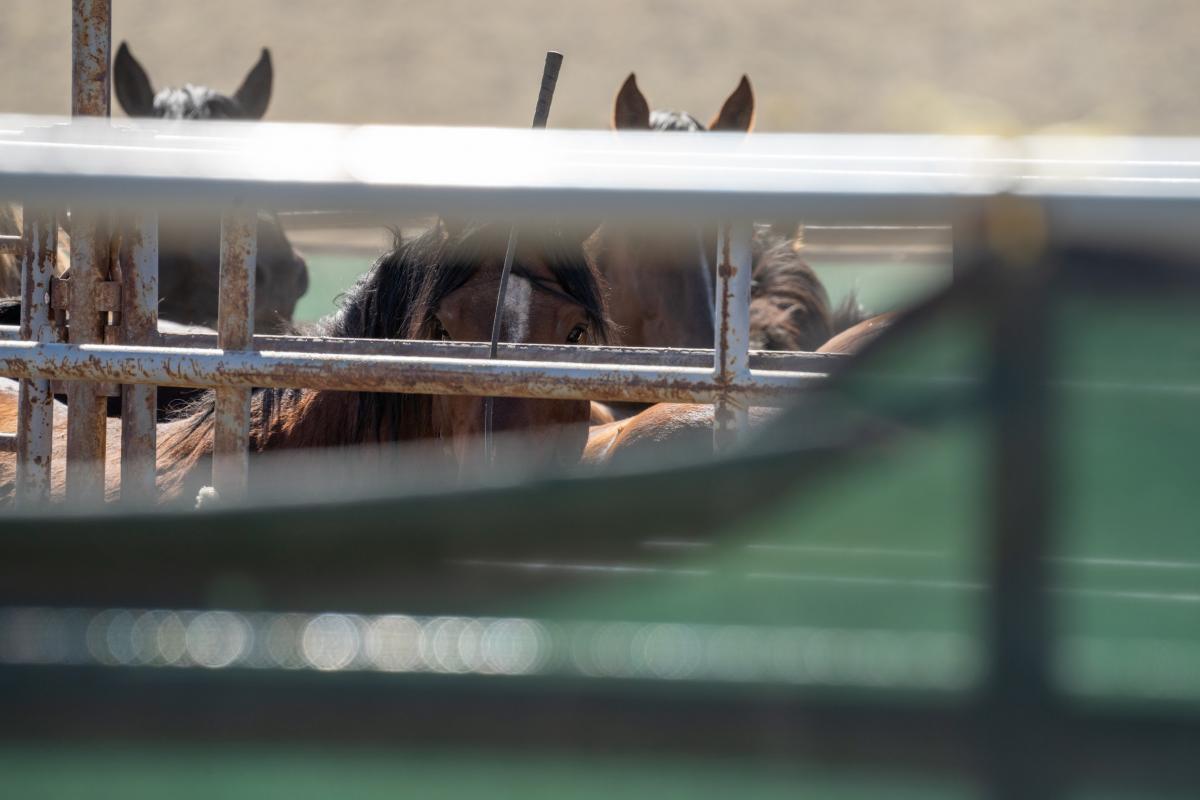 WASHINGTON, DC (May 15, 2021)  — Today, the nation’s leading wild horse protection organization, the American Wild Horse Campaign (AWHC), and its coalition partners are calling for the immediate suspension of the Bureau of Land Management's (BLM) Adoption Incentive Program (AIP) following an investigation, confirmed by the New York Times, documenting that the government is laundering wild horses to slaughter through the AIP, evading long-standing Congressional slaughter ban.

The Times story, prompted by research conducted by the American Wild Horse Campaign with assistance from Evanescent Mustang Rescue, Skydog Sanctuary, and Black Hills Wild Horse Sanctuary, investigated the influx of wild horses and burros in kill pens (livestock auctions that ship the federally-protected animals to slaughter plants in Canada and Mexico).

“We call on the U.S. Department of Interior to immediately halt the BLM’s Adoption Incentive Program, which is defrauding American taxpayers and sending federally protected wild horses and burros to slaughter,” said Suzanne Roy, Executive Director of the American Wild Horse Campaign. “This disastrous outcome is the predictable result of the BLM’s failed policy of cruelly rounding up wild horses and burros by the thousands from public lands each year instead of managing them humanely in their habitats on our public lands.”

The AIP pays people $1,000 to adopt a wild, unhandled horse or burro. An individual can adopt up to four animals at one time. The incentive comes in two payments: $500 when the animal is adopted, and $500 after the title is transferred a year later. The program was launched in March 2019. By 2020, when the first AIP incentives were fully paid out, rescue groups noticed a dramatic increase in the number of unhandled wild horses and burros at kill pens.

The AWHC investigation, confirmed by the Times story, revealed that individuals, and sometimes groups of related people, were adopting horses, putting them out to pasture for a year, collecting both AIP payments, and “flipping” them to kill pens. Adopters sign an agreement under penalty of perjury not to sell horses or burros for slaughter, potentially opening those defrauding the federal program to criminal charges.

“Since the start of the AIP, we have consistently seen more and more groups of unhandled mustangs dumped in kill pens, including some still wearing their BLM neck tags,” says Candace Ray Founder of Evanescent Mustang Rescue and Sanctuary. “We expect to see many more unhandled mustangs needing rescue after adopters who received their $1,000 from the AIP funnel the horses into kill pens across the country. This cycle will continue until the program is shut down.”

“Skydog Sanctuary has spent years rescuing wild horses and burros out of the slaughter pipeline. By far, 2020 - the first year adopters received titles under the AIP -  is the worst year we’ve ever seen, with a shocking increase in the number of untouched, untrained federally-protected wild horses in slaughter auctions,” said Clare Staples, founder, and president of Skydog Sanctuary. “The cost to these horses is way too high and we are calling for a halt to the program, echoing the call of over 86,000 people who have so far signed our petition demanding the end of this costly and disastrous program.”

“We join in the call to end the Adoption Incentive Program, which is clearly increasing the numbers of wild horses entering the slaughter pipeline,” said Susan Watt, Director of the Black Hills Wild Horse Sanctuary. “Our founder Dayton O. Hyde created the Black Hills Wild Horse Sanctuary as a refuge for wild mustangs who lose their place on our public lands and face the danger of slaughter. The AIP has unquestionably increased this threat. The program must be terminated for both the sake of the horses and the taxpayers who fund it.”

The investigation also revealed disturbing abuse and severe neglect of wild horses and burros by AIP adopters who were unwilling or unqualified to provide proper care. This included emaciated, starving animals, and severe abuse, including a horse living in a dog pen and standing in 5 inches of mud, a horse with multiple sores on its body, and a horse found unable to stand, with her neck folded back due to severe injury.

In the wake of the NY Times revelations, the American Wild Horse Campaign launched an online petition to Interior Secretary Deb Haaland calling for the immediate suspension of the AIP, an investigation into the program, criminal prosecution of adopters who violated their adoption contracts by selling horses for slaughter, termination of BLM employees who knowingly placed wild horses and burros into high-risk situations, and redirection in funding toward humane and scientific fertility control instead of the failed system of rounding up and penning of these iconic symbols of the American West.

More information on the program and investigation into it here.

About Evanescent Mustang Rescue and Sanctuary

Evanescent Mustang Rescue and Sanctuary was created for the prevention of animal cruelty through educating the public about horse care and safety as well as rescuing the equine (specifically mustangs and burros) from slaughter.

Skydog Sanctuary is a 501c3 non-profit sanctuary that rescues at-risk wild mustangs and burros in need. We reunite equine families and keep bonded animals together. We raise awareness for wild horses & donkeys in America.

Black Hills Wild Horse Sanctuary has been providing a forever home for America’s Wild Horses for over 33 years. This 12,000 acres of privately owned nonprofit Sanctuary is home to all wildlife and hundreds of wild mustangs.