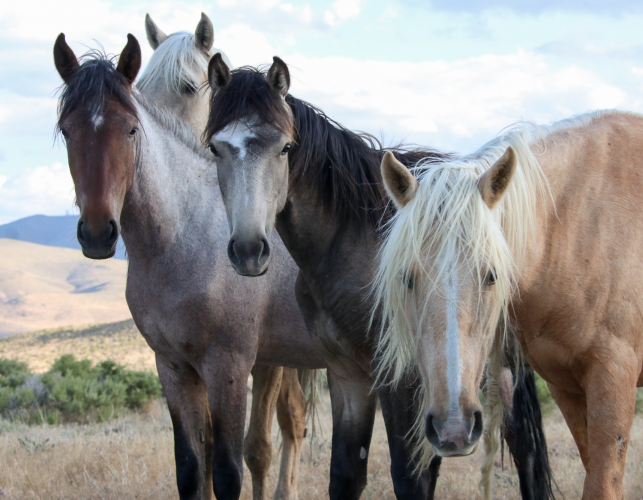 (August 5, 2019) Fifty years ago, Congress enacted the National Environmental Policy Act (NEPA), which requires federal agencies (like the Bureau of Land Management and the United States Forest Service) to assess the environmental effects of proposed actions on public lands prior to making decisions.  The first environmental law passed in the United States, it's often called the Magna Carta environmentl laws. NEPA's purpose is to inject environmental considerationns into government decision-making processes and to help public officials make decisions that are based on an understanding of the consequences of the project on the land and the affected environment. NEPA's other primary purpose is to increase citizen involvement in government decisions.

Because of NEPA, prior to approving actions like wild horse roundups and other actions affecting wild horses, livestock grazing renewals, oil and gas leases, and mining operations, federal agencies are required to evaluate the effects on the environment through two primary tools, an Environmental Assessment (EA) or an Environmental Impact Statement (EIS). A hallmark of thes processes is the opportunity for the public to submit comments at each stage of the environmental reviw process. In the case of wild horses and burros, this allows citizens to participate in decision making and provides a mechanism for ensuring that federal law protecting these iconic animals is upheld.

Now the opportunity for citizen participation under NEPA is in jeopardy with the Forest Service's release of a ‘Notice of Proposed Rulemaking’ that seeks revisions to the Agency’s regulations for NEPA compliance. The Forest Service claims that its proposed changes would help increase the pace and scale of work that the agency is able to accomplish, but in reality, it is a transparent attempt by the Agency to weaken the NEPA process. Of particular concern to our work, are the proposed amendments to (1) remove a current requirement for a public notice and scoping period for all NEPA actions and reduce it to just Environmental Impact Statement (EIS) actions, and (2) to implement a Determination of NEPA Adequacy (DNA) provision in order to make this tool available to the Forest Service.

Currently, the USFS’s implementing regulations include a section that requires the agency to notify the public and provide a scoping period for comment on all NEPA actions. The scoping period allows interested citizens and stakeholders to have a say in the issues and impacts of proposed actions that are analyzed through the NEPA process. As one example, we often submit scoping comments asking the BLM to analyze the social and economic impacts of proposed wild horse roundup actions, as well as the impacts of the roundup on the wild horses themselves.

The new amendments propose to instead limit this provision so that the Forest Service is only required to provide this opportunity and notice to the public when it is conducting an EIS. However, in the case of wild horses, EIS's are very rarely done; rather wild horse and burro actions are generally analyzed in an environmental assessment. Thus, under the new rules, citizens would not have an opportunity to comment on the scope of the analysis to be undertaken for specific government actions, like wild horse roundups.

In place of the requirement, the Forest Service is proposing to implement a “right-sizing” program approach which essentially allows the responsible Forest Service official the ability to choose when it is necessary to notify the public and hold open public comment periods, without any requirements to do so. AWHC is concerned that this amendment will leave too much discretion to the agency and allow the Forest Service an opportunity to avoid public input, leading to less transparency and accountability in how our wild horses and burros are managed on public forest lands.

A Determination of NEPA Adequacy (DNA) is a tool to determine whether a previously completed NEPA analysis can satisfy the requirements for a proposed action. This tool can easily be abused by agency discretion. In short, it is not uncommon for an agency to revive an old EA that was never implemented years later via a DNA and no additional analysis.

As an example - last year, the Bureau of Land Land Management (BLM) used a DNA to attempt to move forward on a roundup action in the Sand Wash Basin Herd Management Area (HMA) that was approved two years prior.

The issue there was not necessarily the time that had passed, but the new strategies that the agency wanted to add to the action inappropriately under a DNA instead of conducting a new EA.

Some important differences between the two NEPA documents were: the old EA analyzed the roundup and removal of 50 horses and the new DNA was issued for a proposed action to remove 548 horses; the proposed action in the old EA sought to reduce the population to  the upper limit of the AML while the new DNA’s action’s goal was to reach the low AML; and the proposed action under the old EA prioritized a PZP fertility control program whereas the new DNA gave no specific information about the fertility control component, nor did it indicate whether the program, which is a partnership between BLM and a non-profit organization, was still supporte.  So far the roundup that was the subject of the DNA has not taken place.

Given that the Forest Service mentions modeling this provision after the BLM’s use of this tool, AWHC is concerned that a similar avoidance of proper analysis and public involvement will also take place within the Forest Service if a DNA provision is provided under these proposed amendments.

WHAT YOU CAN DO