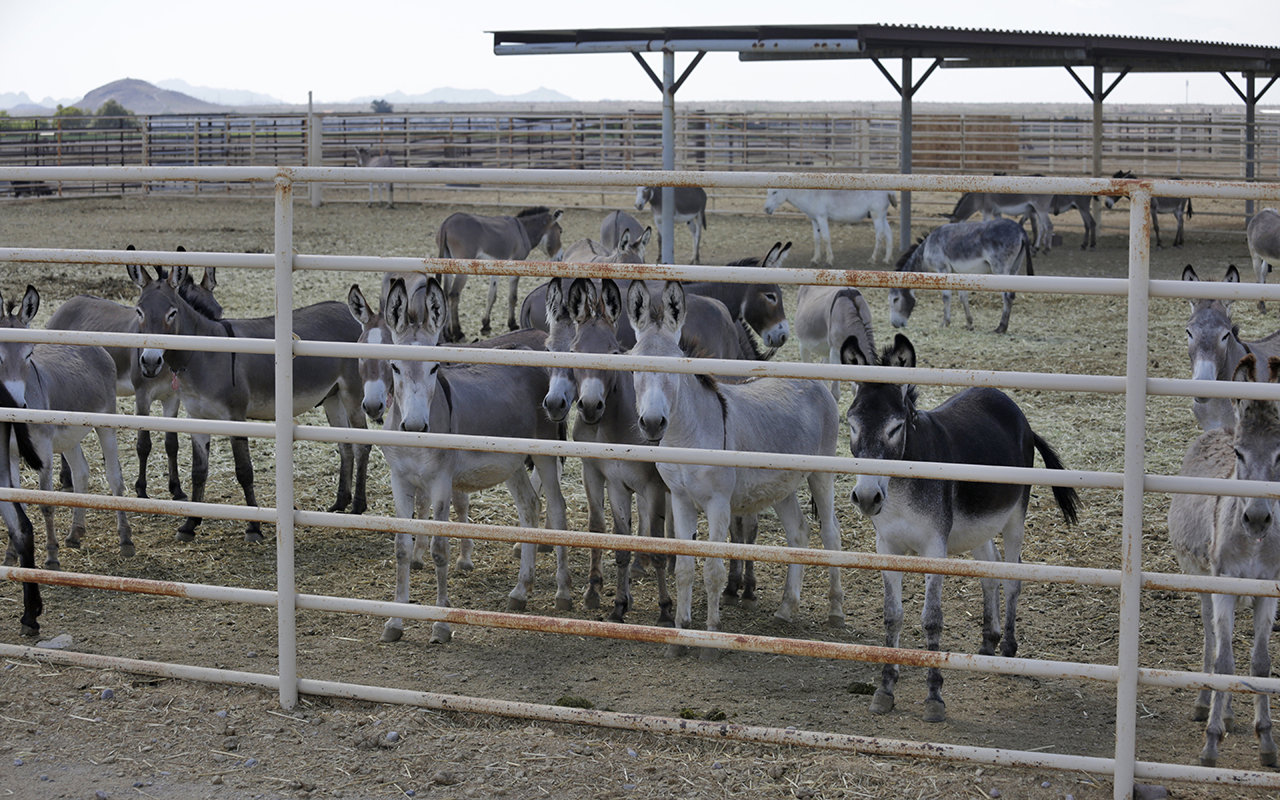 Guest Blog: A Look at the Black Mountain Burro Roundup

Guest Blog: A Look at the Black Mountain Burro Roundup

(Aug 4, 2022) Now that roundup season is escalating and demanding our attention we can’t forget those that occurred over the past few months; especially the roundup of Arizona’s Black Mountain burros - descendants of burros used by miners and prospectors during the 1860s and one of the last remaining large, genetically-healthy burro herds.

While the roundup may have ended it is just the beginning of more trauma and a long, at times life-threatening, journey for these burros. The first leg is temporary holding where they establish new bonds while being processed before they are, once again, torn away from their new family and transported between other facilities and events until finally adopted. There are no designated long-term facilities for these burros or any burros, and they will never have a chance to “retain their wild status” in an off-range pasture as claimed by the BLM.

Not having the chance to observe the roundup I decided to visit all 1,093 of the Black Mountain burros in the Arizona Florence Holding Facility. 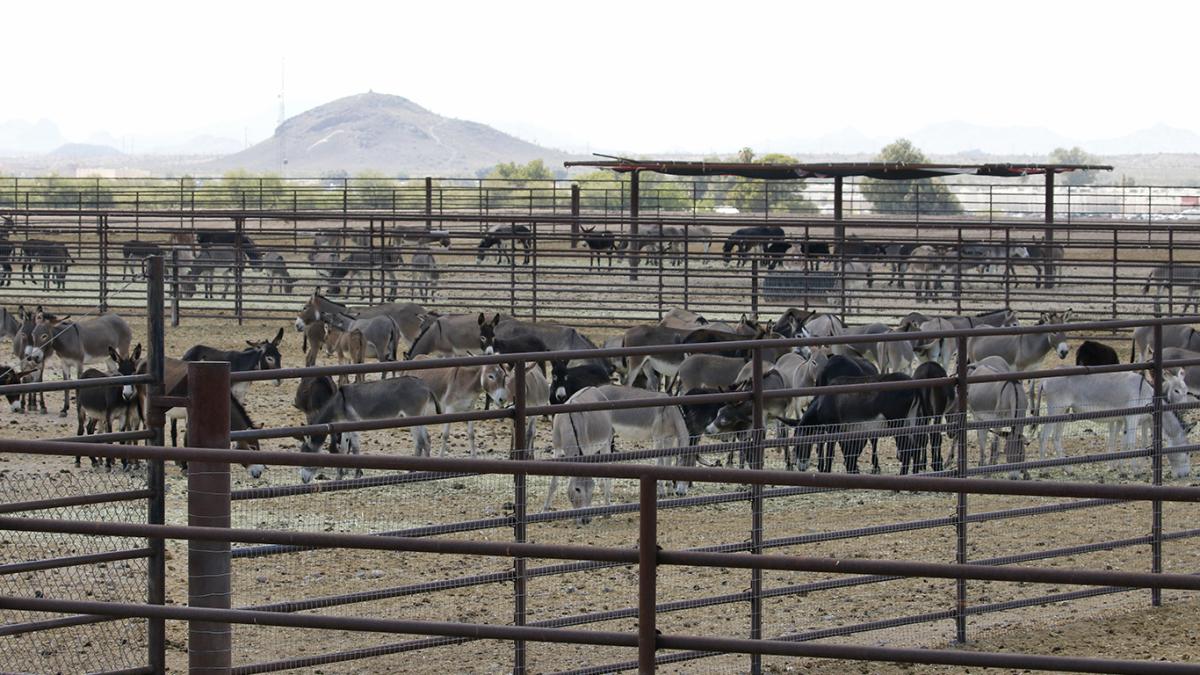 Watching so many burros - stretching as far as the eye could see - that had been living wild and free just a month ago and were now restricted to such confined areas - was heartbreaking. Small groups continually circled the pens in a desperate attempt to follow the nomadic life they were accustomed to while others huddled with their newfound buddies or clustered along the fence line – their curiosity superseding fear. 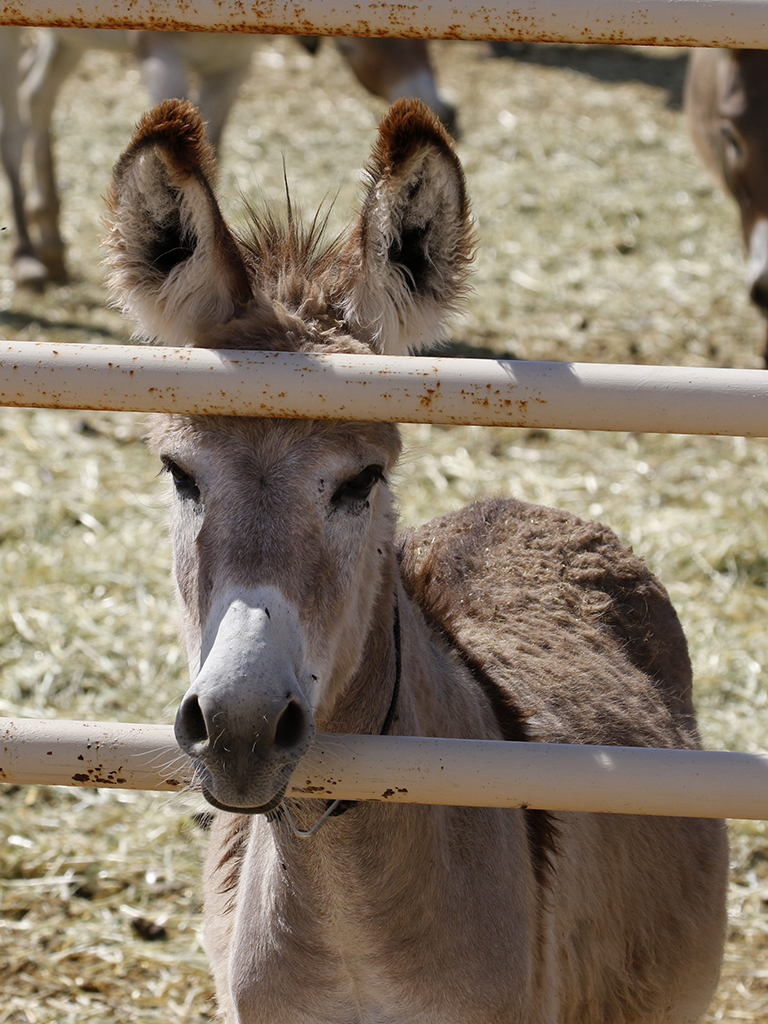 The burros were simply beautiful – all in good shape with shiny healthy coats. They boasted a vast array of colors and markings but the most prominent were the grays – light muzzles and bellies, dark defined dorsal stripes, manes tipped and ears brimmed with black, and zebra stripes running up and down their legs. All these characteristics reflect their origin in North Africa where the African wild donkey has been critically endangered since 1996.

And then there were the foals, dozens and dozens of them. 541 jennies and 104 foals had been rounded up and one can safely assume a large percentage of the other 437 jennies either aborted, gave birth in holding, or would be foaling over the ensuing weeks or months.

Many of these pregnant jennies will be adopted by people having limited knowledge about wild burros and their care. When a foal is born after the jenny is adopted there is no record in the BLM database and the adopter is free to do what they want with them. These babies simply disappear from the system and are never accounted for.

Soon the Florence Facility pens will be emptied and the burros will be gone. But, down the road, this entire scenario will be repeated due to the November 2021 aerial survey calling for further roundups. 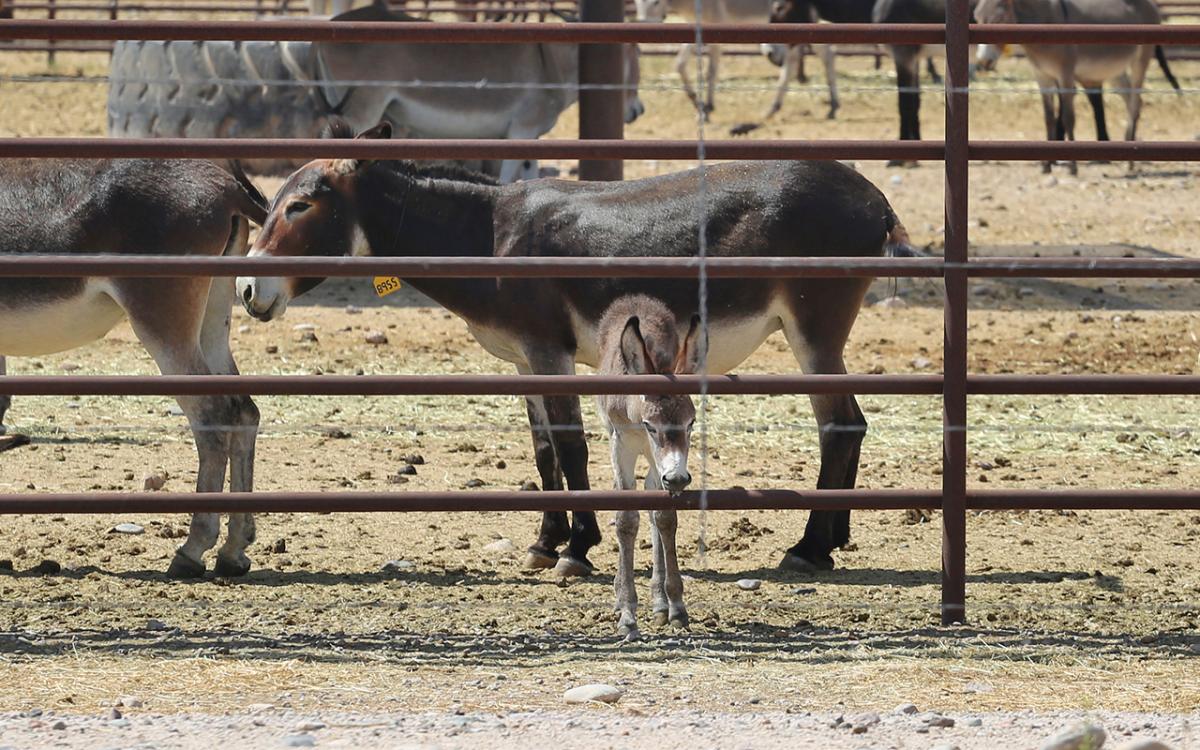 Using the current Standard Operating Procedures for Wild Horse and Burro Double-Observer Aerial Surveys (2020) that stemmed from the U.S. Geological Survey (USGS) study that tested new methods for counting wild burros the on-range population estimate almost doubled to 2,976 when only a few months earlier, after 485 had been removed, it was approximately 1,531. If the survey had not altered this number the latest roundup would have put the Herd Management Area (HMA) close to the Appropriate Management Level (AML) but, instead, it just insured the roundups would continue.

The BLM believes that burro population estimates are too low because so many go undetected during aerial surveys. As a result, of the USGS study new population estimation techniques and models were developed in an attempt to account for these burros that were missed during the survey.

When two or more people are trying to observe several small bands appearing simultaneously from the air it can be problematic. Each band will likely only be observed by a single person who must record the count, description and covariates in a matter of seconds.  Observers try to photograph large groups for supporting documentation but, due to the small band sizes and the tendency for burros to scatter these opportunities are limited. Yet, even in circumstances when the observers have no ability to compare their data, it will still be used to project burro population numbers during analysis to provide guidelines for the BLM.

Future population growth is also determined using an average expected annual growth rate based on the assumption that past growth rates are applicable in the future. This approach often fails to consider how variations in annual climate, population density, resource conditions, sex and age-specific reproductive and survival rates, and fertility control use will impact population numbers from year to year.

Variables, such as herd size, vegetation cover, position, and experience of observers are now considered significant in burro detection and abundance estimations but they have only been applied and assessed for a small number of populations and according to the USGS it would be beneficial to use a larger sample size with detections from additional study areas to refine our understanding of the most important covariates.

I’m curious as to where they are going to find these larger sample sizes of burros as the BLM is currently in the process of destroying the same in their attempt to reduce the nationwide population to 2900. The Black Mountain burros are a perfect example.

USGS also recommended post-gather aerial surveys to determine the accuracy of count methods subject to human error, limited detection, and complex logistics. They would also allow trend characteristics to be analyzed over time so that reliable comparisons could be made. The BLM has not announced any plans for such a survey to take place in the Black Mountain HMA where 7 years had lapsed between the 2014 and 2021 surveys.

The BLM is not required to follow the USGS guidelines when estimating and reporting annual HMA herd abundances which will undoubtedly continue to involve some guesswork and judgment calls to be made in the field. Increased use of radio collars for detection was also encouraged by the USGS but due to the cost, time, and potential for technical failure, I do not see this likely to happen.

So, according to the BLM, after the latest roundup, almost 2,000 wild burros remain on the Black Mountain HMA. An estimated 1522 will need to be removed to achieve an AML of 478.   If the annual growth rate formula is applied in FY2023 both the on-range population and the numbers to be rounded up will increase.

No wonder the roundups never seem to end.