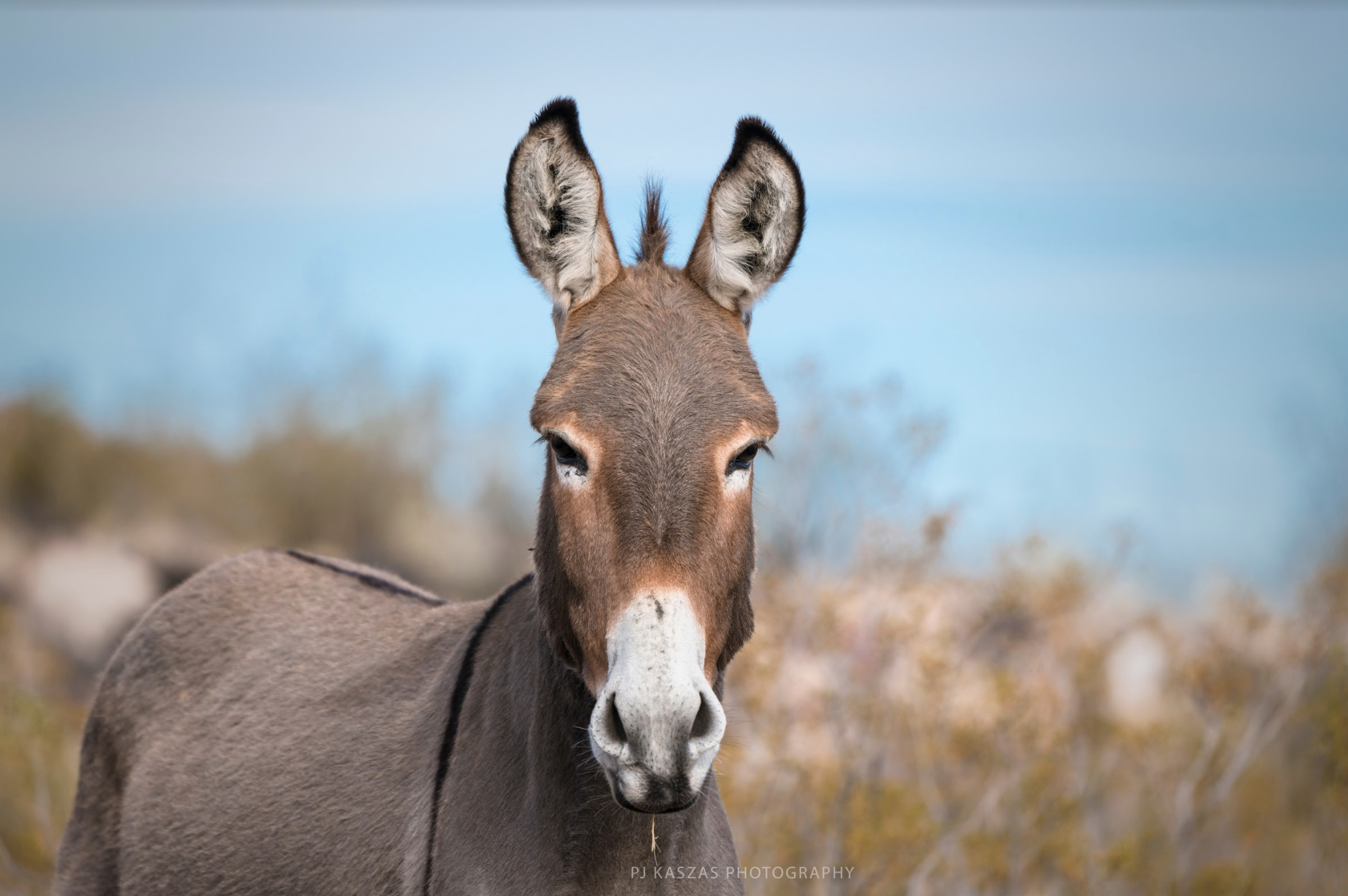 Black Mountain HMA sits in the northeast corner of Arizona. Black Mountain is the largest HMA in Arizona comprised of 1.1 million acres of desert terrain much of it characterized by its volcanic past, now steep mountains, mesas, sheer drops, rocky foothills and sandy washes. Most of the time it’s hot, dry, and windy. But not when I arrived.

I arrived in the HMA during a massive rainstorm. Me and my trusty 4x4 flying through roads threatening to wash out and torrential downpours to get to where I would camp at the base of the Black Mountains somewhere west of Kingman and Golden Valley, Arizona. I was here to photograph the Black Mountain burros. This is the biggest, and most genetically diverse, burro area in the US. 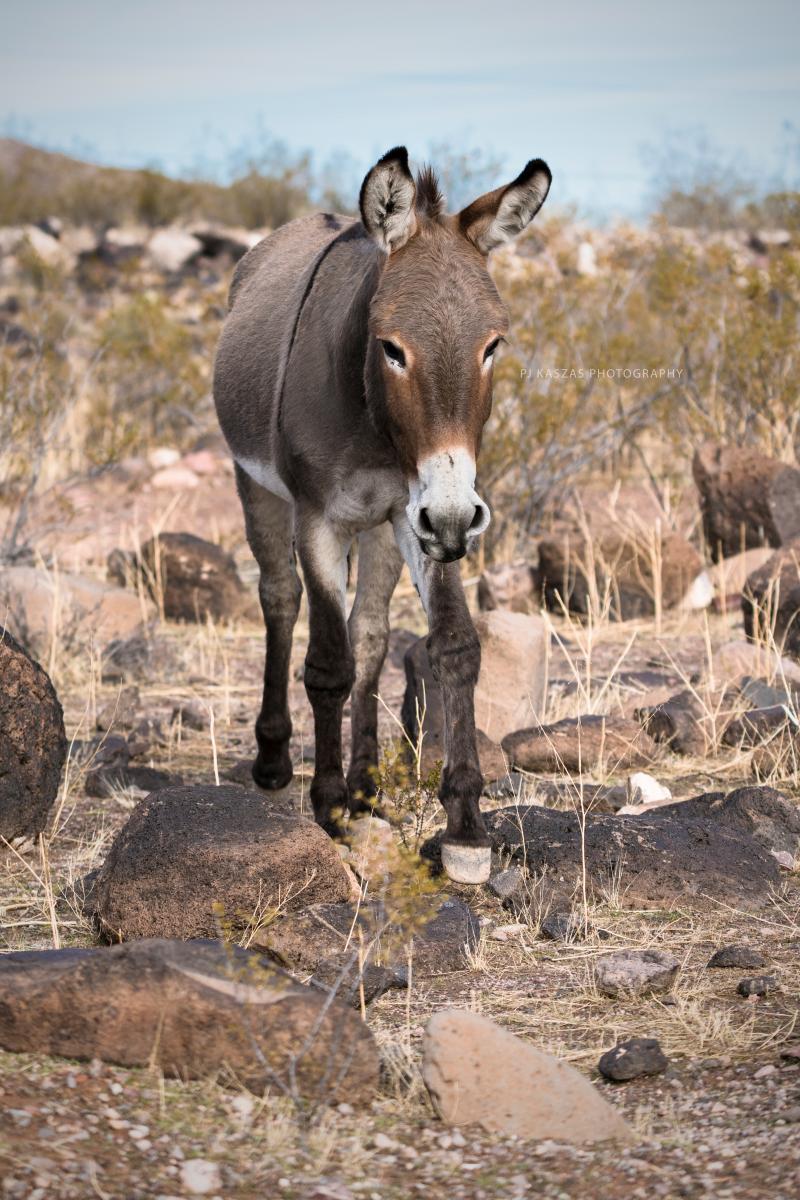 The rain had sent the burros into the protected areas of the foothills of the mountains, which weren’t exactly that accessible. The storm cleared that first evening. But I wasn’t seeing burros that first day. But by the next morning that would change.

I was first awoken by the yips and calls of coyotes. The stars shown brightly overhead still. I rolled over and went back to sleep. But just as the sun thought of creeping over the horizon the burros began braying. Their brays echoed across the mountainous landscape and would become my alarm clock for the next few days.

I hiked and I drove trying to reach the burros I could see in the far distance, still clinging to the hillsides where the storm had driven them. But then I heard others closer, now down on the rocky desert floor that was quickly absorbing every drop of moisture the rain had left, doing it so quickly I could practically see green things sprouting in front of my eyes. 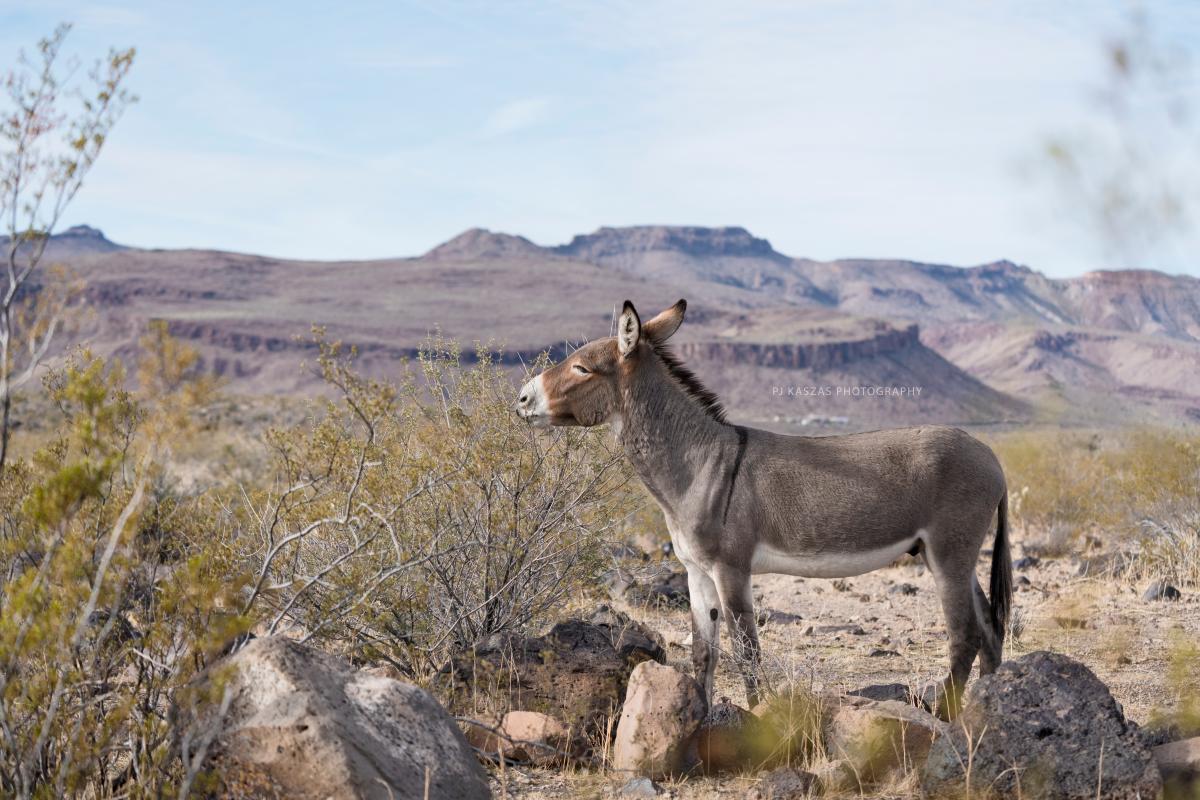 Burros, it turns out, are not easy to find. They blend in. Until they don’t. And that is how I found Herbie. I had driven down the “road” I was staying on, which was mostly just a pile of rocks pretending to be a two track, when I saw a lone burro walking along, occasionally nibbling a bush here, some grass there.

I got out of my truck. His ears, like radar antaennae, turned toward me. All his attention was on me. If a burro, especially a jack burro, has ever seriously regarded you, you know how intense this can be. I sat on a rock. He came down toward me but stopped about 100 feet away. Burros can be territorial. And they don’t immediately run from danger like horses do. They like to size up a situation. They are the deep thinkers of the equid world. These are things to know when photographing them.

We observed each other for quite a while. I took some test shots. The camera didn’t disturb him. I noticed he had some serious scaring on his nose. And then he relaxed. And he let me into his world. As long as I kept between 75 to 100 feet from him Herbie was happy to go about his burro ways. He’d nibble on a mesquite bush here, some grass there. I imagined they were particularly tasty after such a hard rain. And it was the smell of the desert, the herbaceous notes of creosote in the sun, that led me to name my new friend Herbie. 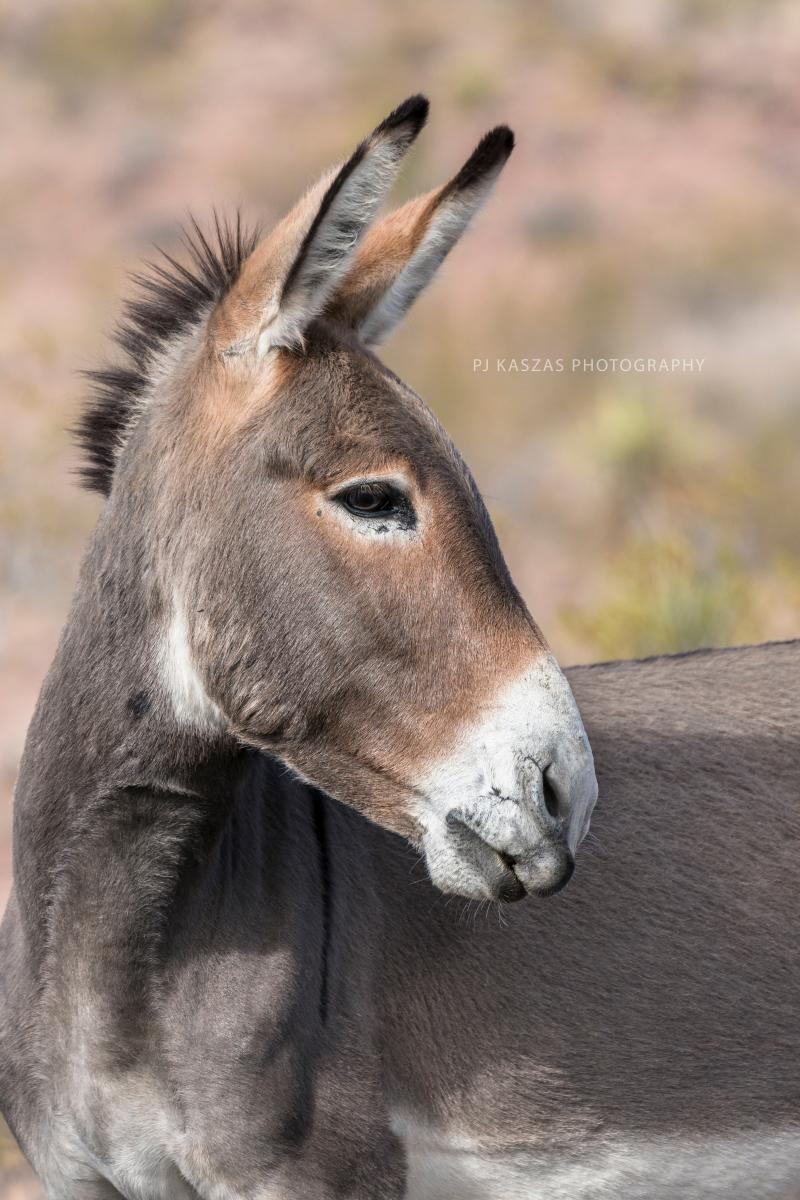 And those ears of his would alert me to what else was out there in the desert with us. Especially other burros. And occasionally, Herbie would deafen me with a bray as he greeted old friends or rivals as they passed through the area where we where. Braying, by the way, is created by vocalizing on an inhale, the hee, and then on an exhale, the haw. Donkeys, or burros, are the only equids that can do this.

Over the course of three beautiful days it would be Herbie that taught me about burro behavior. I didn’t purposefully seek him out. Our paths would cross out there in the desert, his scared nose telling me it was him again. Each time he’d see me he’d approach only so far and then go about his business of ignoring me. Doing this he’d teach me where to find other burros, what burros liked to eat, where they might grab a drink, what life was for a burro living in this rocky, mountainous desert. 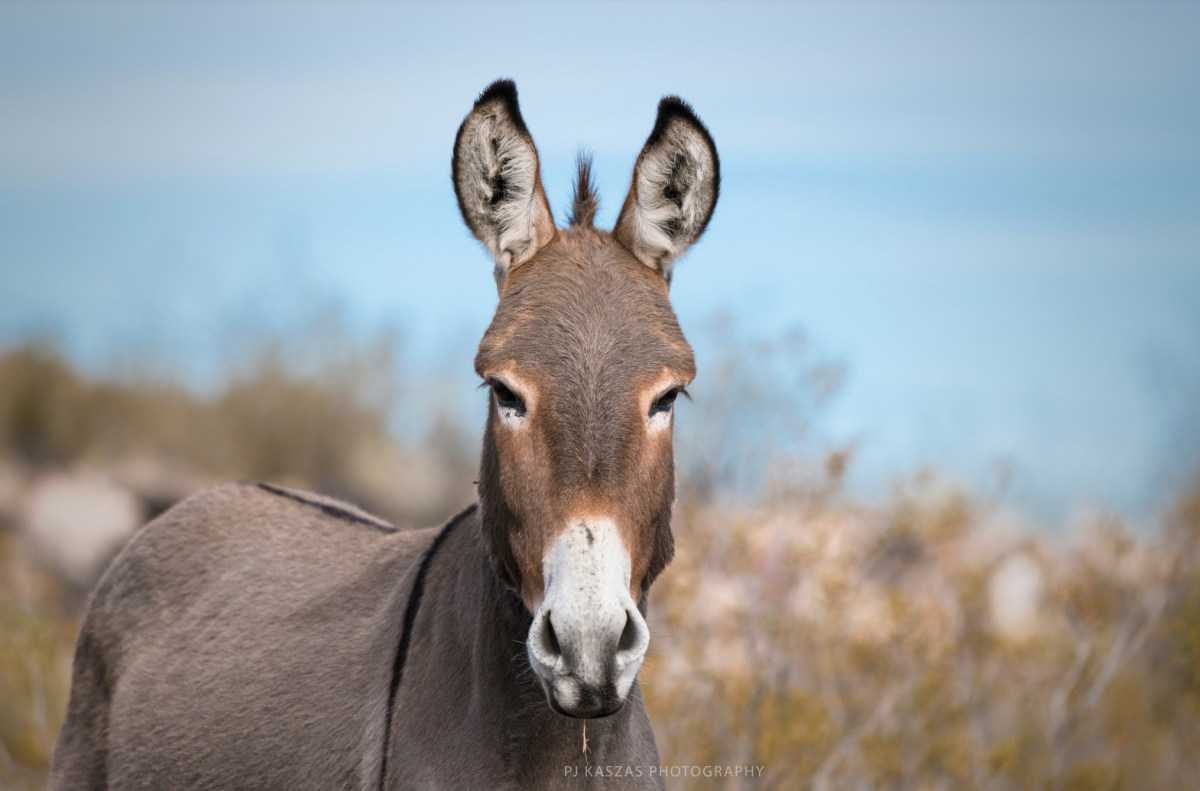 I am forever grateful for the three days Herbie tolerated this strange biped with the weird camera clicky thing who chose to hang out with him, from a distance that he determined. He’s an exceptional burro. Help Herbie keep his home. The Black Mountain burros are under threat of round up this year. The plan? To remove 75% of the burro population from these hills. These are federally protected animals. Do not let private and for-profit interests, like mining and ranching, dictate what happens to these animals on our public lands. Speak up. Be loud. Like a burro. And may these burros’ brays be heard ringing through these mountains for years and years to come.

PJ Kaszas is a wildlife and documentary photographer as well as a writer, multimedia designer, world traveler, and a former archaeologist. She does art in service to animals, nature, science, and history. She is a storyteller no matter the medium. Several years ago she focused on photographing wild horses wherever they are found. But all the wild things we share our world with fascinate her and through her photography, she hopes to share some of that wonder and curiosity, and show that sometimes that wonder and curiosity between photographer and subject goes both ways. She is co-founder of Wild Horse Photography Collective (@wildhorsepc on Instagram) and Bonkers for Burros (@bonkersforburros on Instagram), ever-growing communities of photographers dedicated to advocating for wild horses and wild burros.