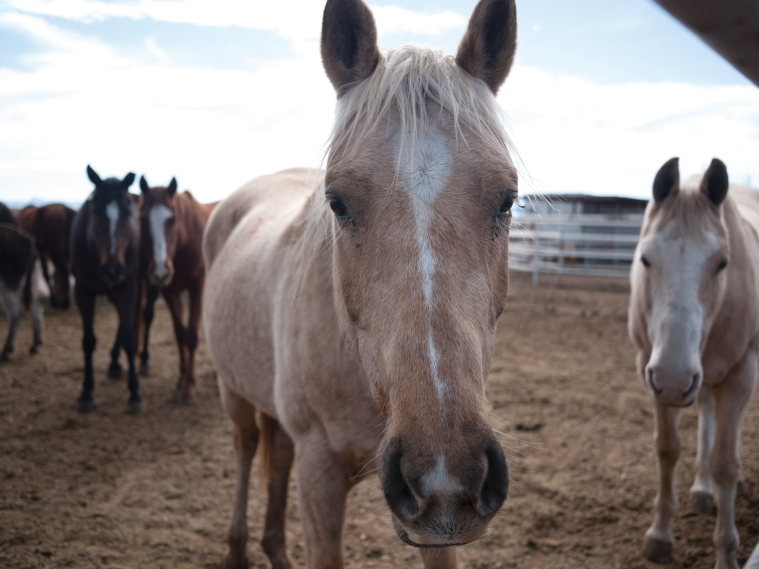 I applaud U.S. Rep. Deb Haaland for taking a stand to protect wild horses and supporting efforts in the U.S. House to humanely manage wild horse populations on the range where they belong. She recently took a stand against the Bureau of Land Management’s plan to conduct brutal surgical sterilization procedures, and she is urging the BLM to utilize a reasonable portion of its budget to implement humane fertility control, the PZP vaccine. PZP is a viable solution and costs only a fraction of what the agency spends on removing and warehousing horses.

The Bureau of Land Management must end its failed strategy of removing horses. Terrified horses — including young foals — are chased by helicopters and often killed or severely injured. Just this month, a horse suffered a broken neck during a roundup in Utah. Removing and warehousing horses in corrals leads to an increase in population growth and is projected to cost over a billion dollars if the agency continues on this path. Surgical sterilizations are no better, as horses would be subjected to the procedure on the range and without adequate pain control. It’s time to get BLM on a sustainable track, and part of that includes implementing PZP.

I thank Haaland for her tireless efforts to protect horses and implement a commonsense solution to manage horses on the range. Our other U.S. representatives and senators should follow her lead.

Check in to reality

So, Rep. Rachel Black of Alamogordo, Donald Trump won, and “a lot of things don’t jive in my mind” (“Did Biden win? Some New Mexico Republicans express doubts,” Dec. 14). You can say that again. With all due respect, have you considered therapy? And to the rest of your Republican comrades, what would compel anyone to vote someone into the most important political position in the free world, when their highest qualification for office is that of ex-reality show performer? Time for a reality check, folks.

As a relative newcomer to Santa Fe — six years — I’ve been impressed by the Alliance for Local Economic Prosperity’s effort to form what they call a public bank. Your editorial on Sunday (“Robust local food systems will strengthen N.M.,” Our View, Dec. 13) is the perfect reason a New Mexico public bank is needed. Such an institution can shore up the local production of food for New Mexicans by helping farmers and ranchers invest in the means of production. A public bank can leverage the investments made by small, independent farmers and ranchers, thus bringing more locally grown food to market right here in the state.

But it is not just local growers who can benefit. In the same edition, Andrew Stone (“Community solar benefits citizens, not corporations,” My View, Dec. 13) made a good argument for community solar build-outs that will bring cost savings to homeowners and spread the advantages to more people. As he indicated, better we should own our electricity than have foreign companies or Public Service Company of New Mexico build and own it. These examples are just two of many reasons a community bank can help all citizens, and at a lower cost. What’s not like?

It’s very interesting (and notably discouraging) that the general news media has devoted so little attention to the fact that the current Republican Party does not have a platform. How can this be? My lifelong understanding has been that for a political party to exist, it must enunciate its beliefs, its values, its intentions and its objectives in writing. Both major political parties have done this routinely for as long as I can remember.

This past summer, the Republican Party did not enunciate a party platform. Instead, it released a statement to the effect that it supported the current president’s policies and procedures, thereby implying that it had full confidence in the capacity of one individual to commandeer the intentions and directions of the Republican Party. That is not a political party.

I propose that in the future, any political group that cannot enunciate a party platform not be allowed to participate in national elections. That might just possibly allow the U.S. to avoid becoming a banana republic-style dictatorship!