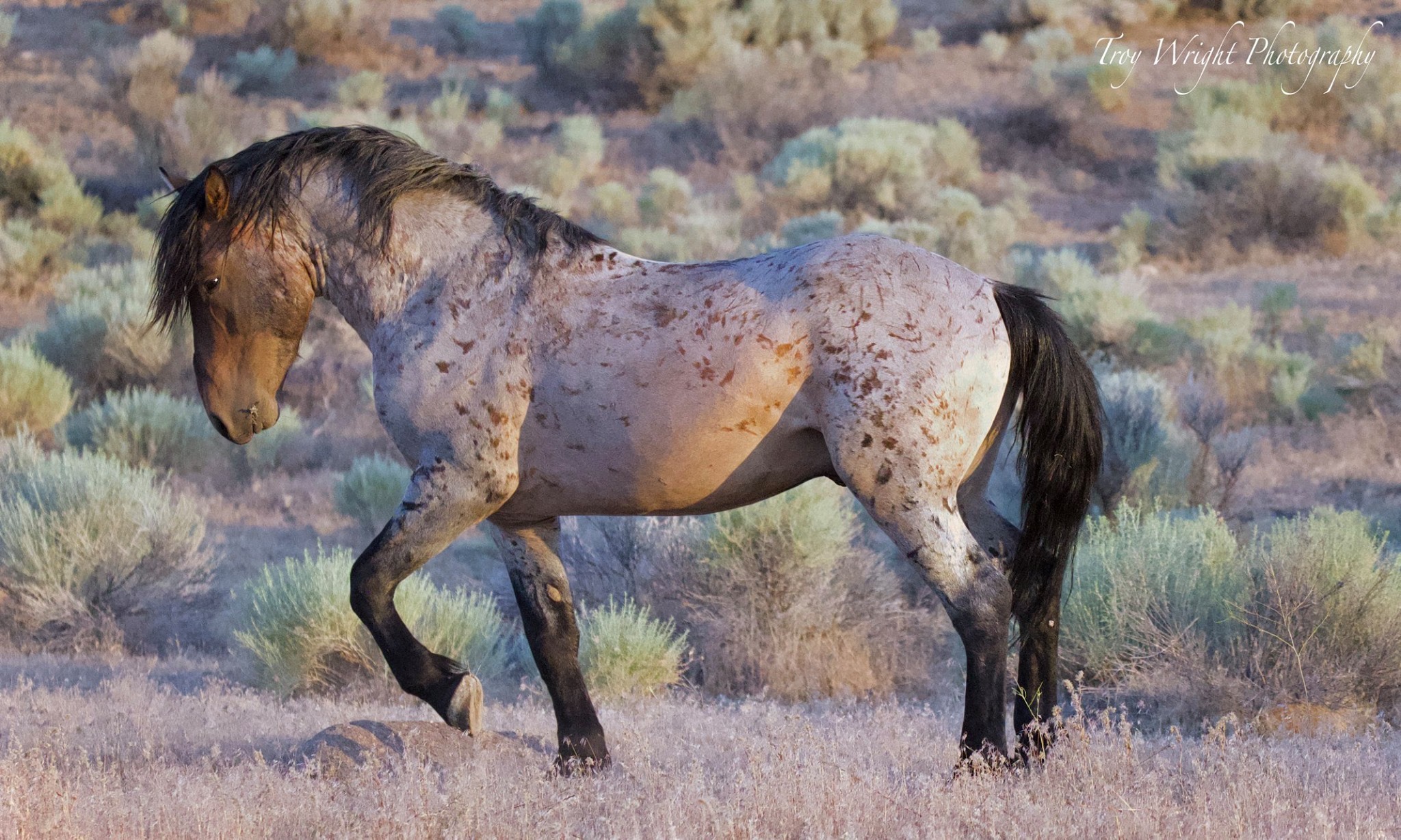 (January 6, 2019) On November 29, 2019, more than 50,000 hearts broke throughout the world at the announcement that the famous wild stallion Samson and his family had been trapped and removed from their home in Fish Springs, Nevada. Over 50,000… that’s the number of people worldwide who follow tales of the Fish Springs wild horses living free on public lands in Nevada’s spectacular Carson Valley. 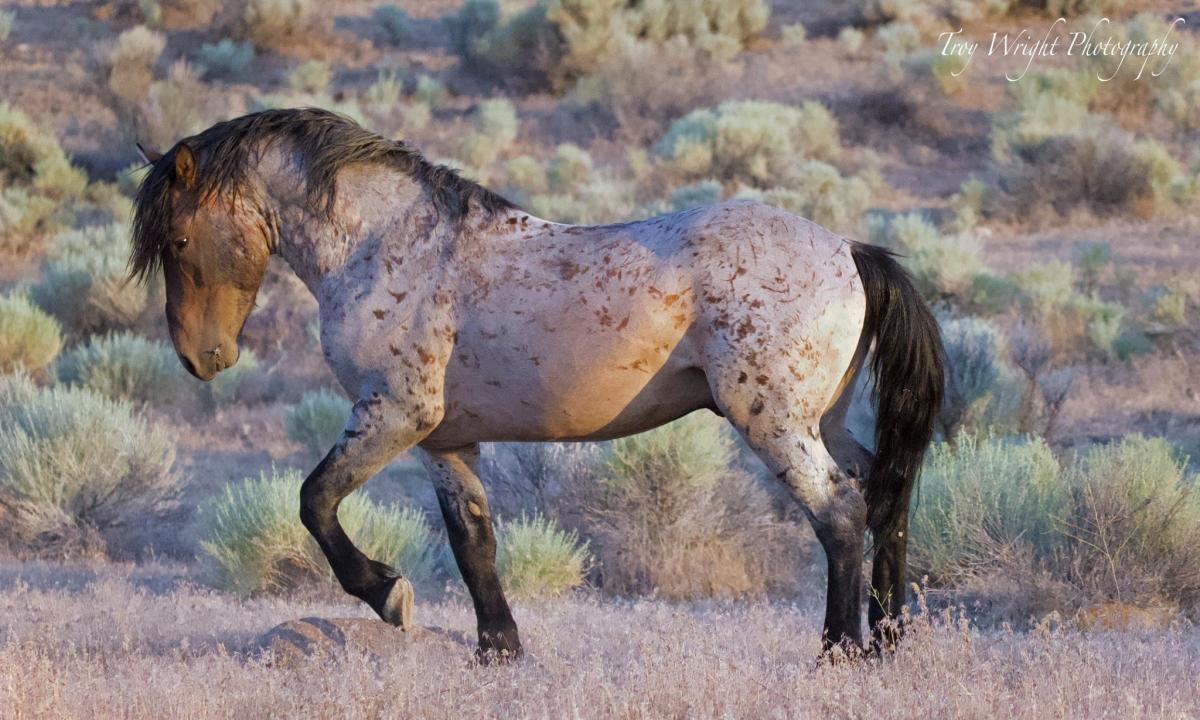 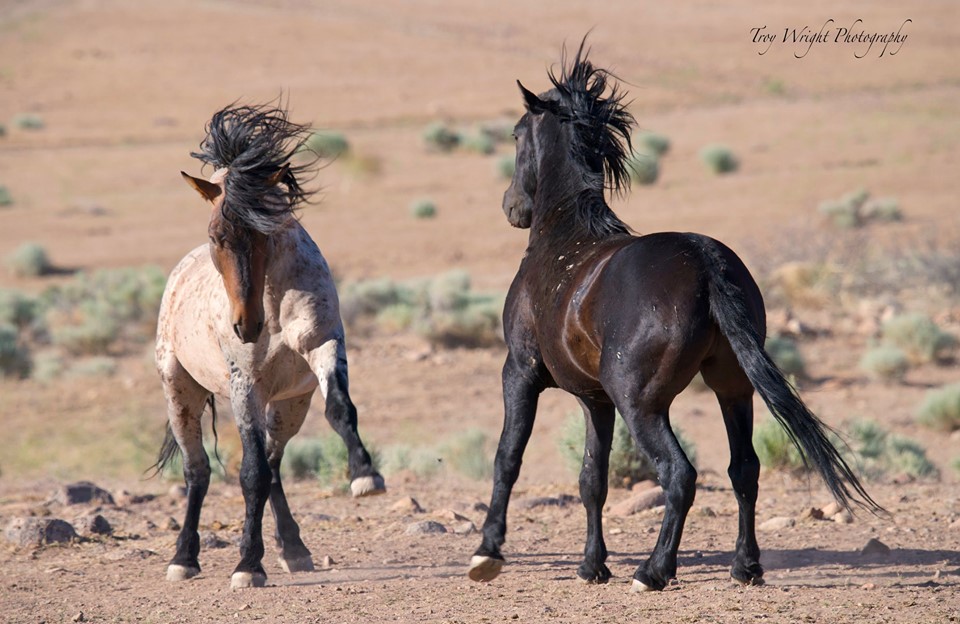 But on the day after Thanksgiving, freedom came to an end for six members of this iconic wild horse population. On that day, the world-famous elder stallion Blue, another member of the Fish Springs herd who thankfully remains free, lost two of his sons -- full brothers Samson and his lieutenant Jet... one bay roan and one jet black. As if that wasn't enough to break hearts, also lost were four generations by Old Momma, a 25+-year-old veteran mare who lived her entire life free in Fish Springs. Old Momma, her daughter Apple, Apple's daughter Dumplin', and Dumplin's colt Sam is now languishing in a muddy corral at the BLM holding facility near Reno. 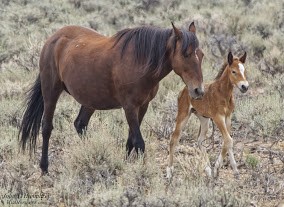 When I first met her in 2011, Old Momma was with band stallion Socks, who was rebuilding his band after his mares had been taken by another stallion, Blondie. Apple was the first baby in this new little band. After a couple of years, the band built up to include Momma, Patches, Apple, Dumplin, Little Socks, Rocky, and Moon, to name a few. Over time, as Socks aged and could not continue managing his growing family, Samson politely took over the band by running them up and down a hillside. In the end, an exhausted old man Socks rested under a Juniper tree and watched his band leave with Samson.

But this story gets sadder. The community of Fish Springs and Gardnerville/Minden were still grieving over the loss of Samson's family only to soon find out that three more families -- 15 additional wild horses -- had been trapped and removed prior to November 29th. Lost were Shadow's newly acquired band from Rogue, Rusty's family, and Rocky's family. 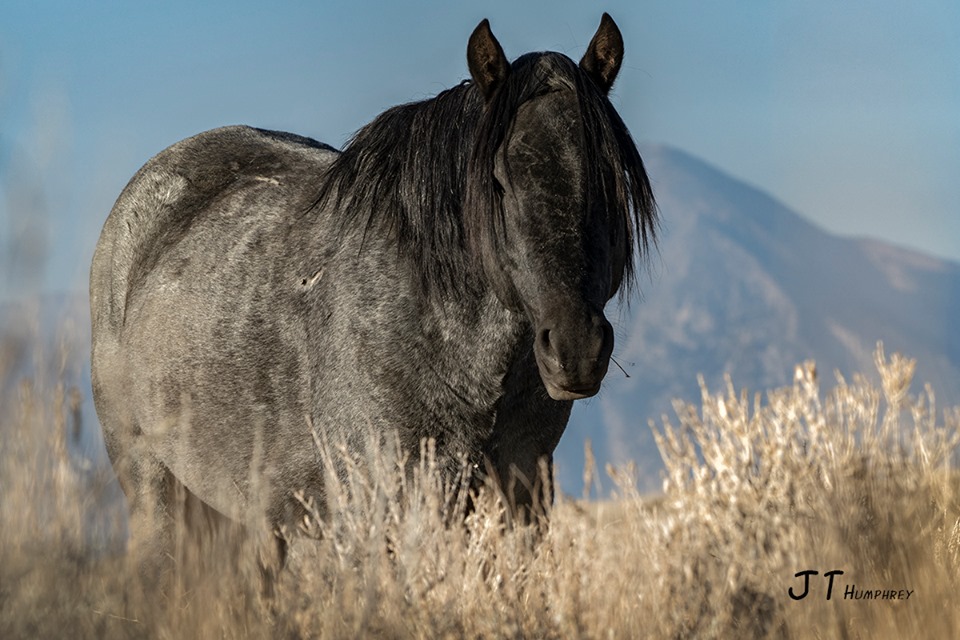 Shadow is also a son of Blue and a tenacious little tough guy who had recently won possession of Camille, her daughter Fury, and Camillie's 2019 colt Jackson. In this band was also the lead mare Rikki who is also a senior mustang and veteran of the range. This family bears the name of Camille Bently, a philanthropist and long-time advocate for wild horses whose family owns Bently Ranch in the area. Camille (the human) and her daughter gave the name “Fury” to the first baby of Camille (the horse). Losing this little family, who quietly existed with their new band stallion, has grieved the hearts of the community, especially those at the northern part of our range, where this family grew up with Rogue. 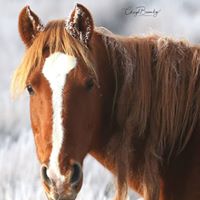 Rocky is a son of Old Momma and Socks and looks very much like his veteran father Socks. His mares Luna and Copper are formerly from Blue's band, Copper was the co-lead mare of Blue's band. We affectionately called her the "Watcher" since she stood sentry and moved the band as she saw necessary. Luna is Copper's daughter by Blue, and Luna's very first colt Jimmy is named for the photographer who found him, Jim Sarah.

Another heartbreaking loss is the filly named Elisa, also part of Rocky’s band. Her namesake Elisa was a wild horse advocate from the East Coast who had bravely fought a years-long battle against cancer before visiting the Fish Springs range to see the wild horses as part of her bucket list. When she visited the area, she was so overwhelmed at being in the presence of these iconic and treasured horses that she sat on a rock with tears rolling down her face. Every single horse in our area seemed to have come out to see her, and this touched her heart. Soon after she left, we had a little filly born to Eve in Blondie's band. We named her Elisa. 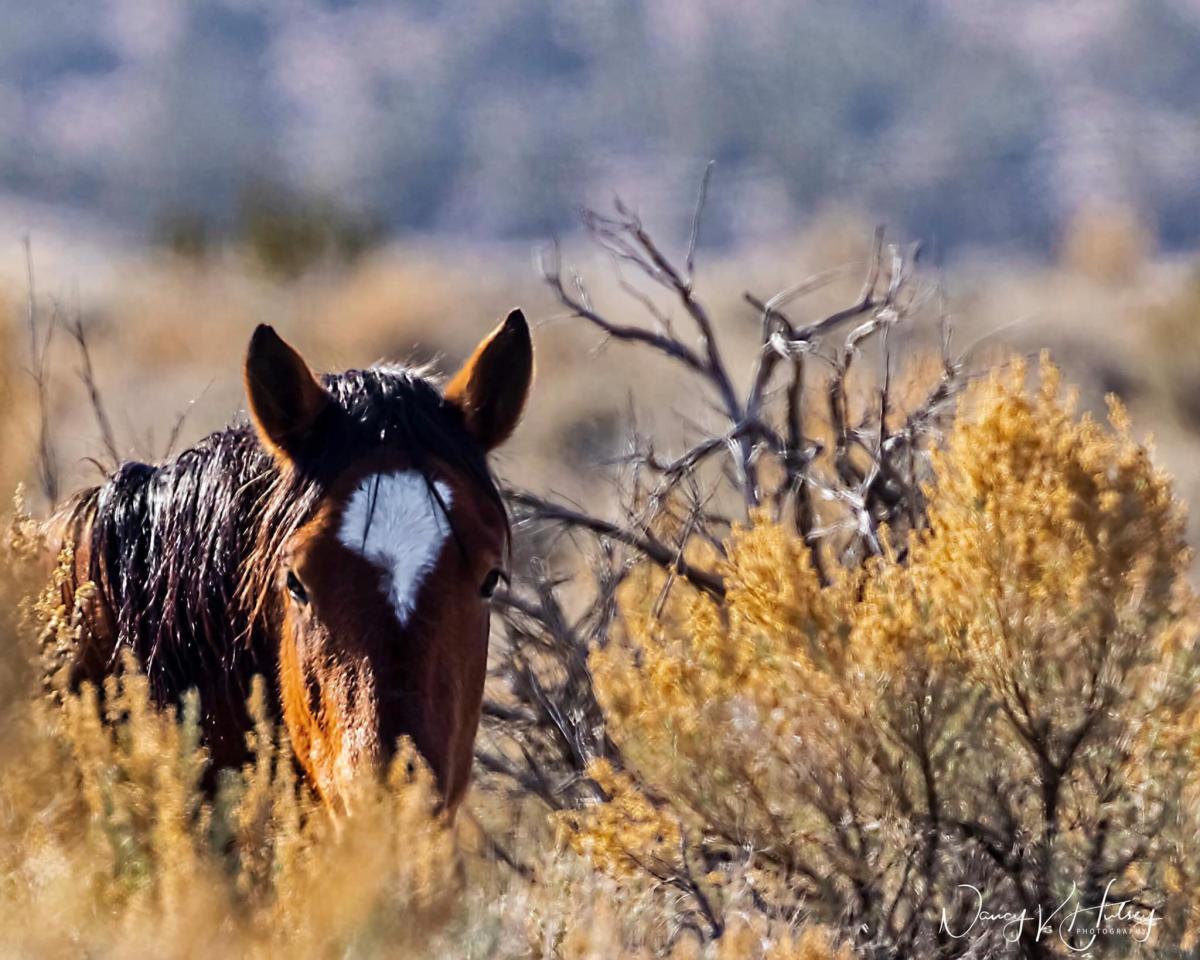 After her trip to Fish Springs, Elisa wrote, “as I begin to fade or need more rest, I will close my eyes and send my spirit to run free in the Pine Nut Mountains.” Within a year of her visit, Elisa passed away. Tragically, Elisa, the beautiful wild filly named for her, now sits in a BLM holding corral, no longer free. You can read Elisa’s moving account of her visit to Fish Springs here. 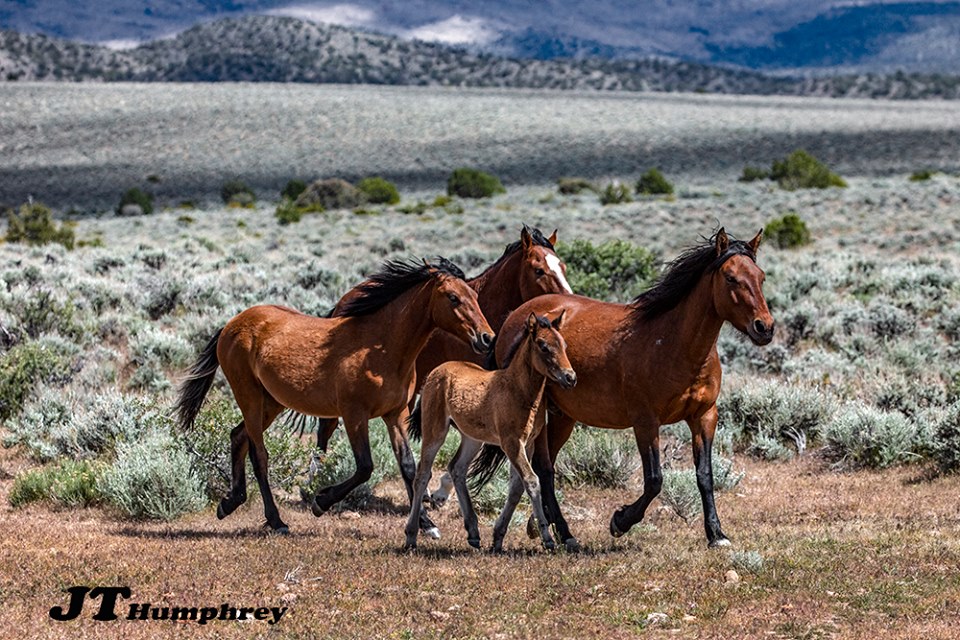 The last stallion taken, Rusty, is a son of Blondie. He left our range a few years back in search of mares in the nearby Pine Nut Mountains. He found a few boys to hang with there but after a bit, ended up at home and joined a group of bachelors (young stallions who have not yet grown strong enough to have their own mares). It wouldn't be long before Rusty joined up with Blue's band after several bachelors fought him for days. When Rusty was captured, his band included Belle, Luke (son of Belle and Blue), and Belle's 2019 filly Amber. His family also includes Cinnamon, Samson's firstborn filly. She now sits in a holding pen as well.

These wild horses are loved by the community and followed worldwide on social media. Each horse and each family has a unique heritage and stories to make you smile and make you cry. Generations of bloodlines, some 2-3-4 generations, were gone in the closing of a trap gate. The capture was requested by a private party who did not take the time to learn of their value and meaning to the community, or of the solutions available for keeping them on their designated range.

Thanks to the generosity of some wonderful sanctuaries and private landowners and individuals, many of these horses  hav places to go to live out their lives together. But the BLM is currently declining to work with the local advocacy group, the Pine Nut Wild Horse Advocates, to place this community’s horses, and instead is insisting in putting each individual up for bid in an online auction. This means that the families will be broken apart and the community will have no say in where these beloved wild horses end up.

AWHC notes that the BLM has stated that part of its plan for future wild horse and burro management is to work with community groups and non-profits to re-home horses who have been removed from the range. AWHC believes that the Fish Springs situation is a great place to start. 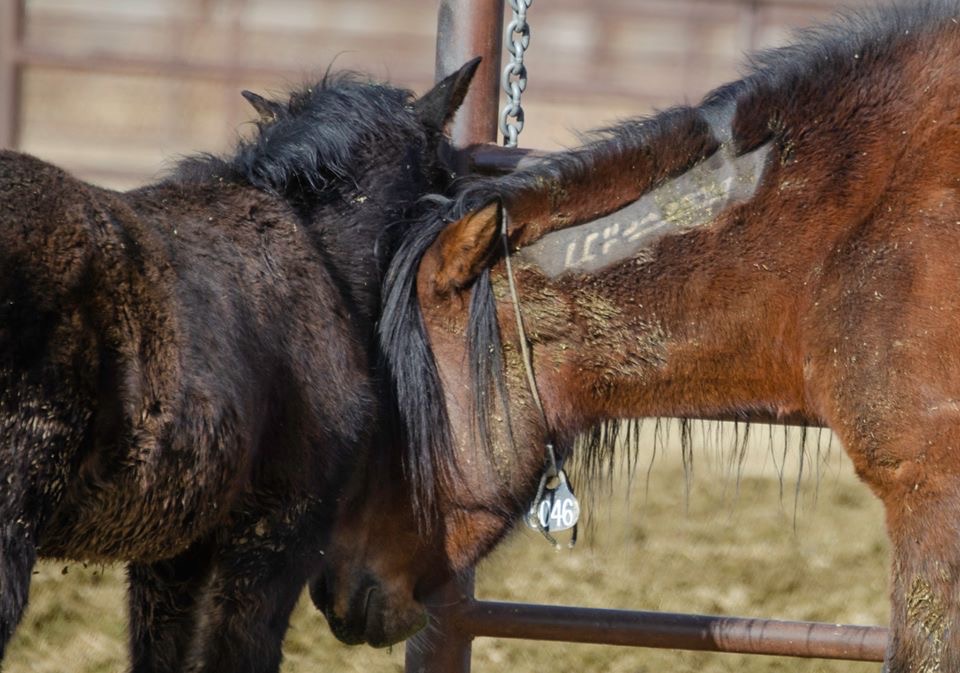 For those of us who lived with them, who named them, who kept their family histories...our lives are shattered, but nowhere near as shattered as the lives of these precious Fish Springs wild horses. A BLM decision to allow the local community to place these horses would be a small gesture of goodwill and a step toward healing the heartbreak this removal has caused in the Carson Valley.

What You Can Do:

Ask the BLM to work with the Pine Nut Wild Horse Advocates and the Carson Valley community to place the captured Fish Springs horses into quality homes that will keep the family bands together.