(November 20, 2018) On Saturday morning, I returned to the Double Devil Corrals in the Modoc National Forest near Alturas, CA for the sale/adoption of recently captured wild horses from the Devil’s Garden Wild Horse Territory. Seeing wild horses who weeks ago were living freely on our public lands now separated into pens from their band members – numbers spray painted on their backs to identify them and their age – was nothing short of heartbreaking.

But on Saturday afternoon, the worst was yet to come – witnessing the incompetent and dangerous handling of the horses by members of the Modoc County Farm Bureau and wranglers hired by Farm Bureau representatives. (The Forest Service awarded the Farm Bureau a four-year $500,000 contact to help build and apparently operate the corrals.)

That’s right, the Modoc County Farm Bureau, and specifically Laura Snell – a vocal pro-horse slaughter cattlewoman who shockingly represents the University of California as a cooperative extension agent. Ms. Snell has previously agitated on behalf of other cattlemen for the removal of wild horses from the Devil’s Garden Territory, but she has zero experience handling wild horses. Yet, she is apparently in charge at the Double Devil Corrals and was the lead in sorting and loading horses, assisted by her summer intern and several wranglers who also had no wild horse handling experience. 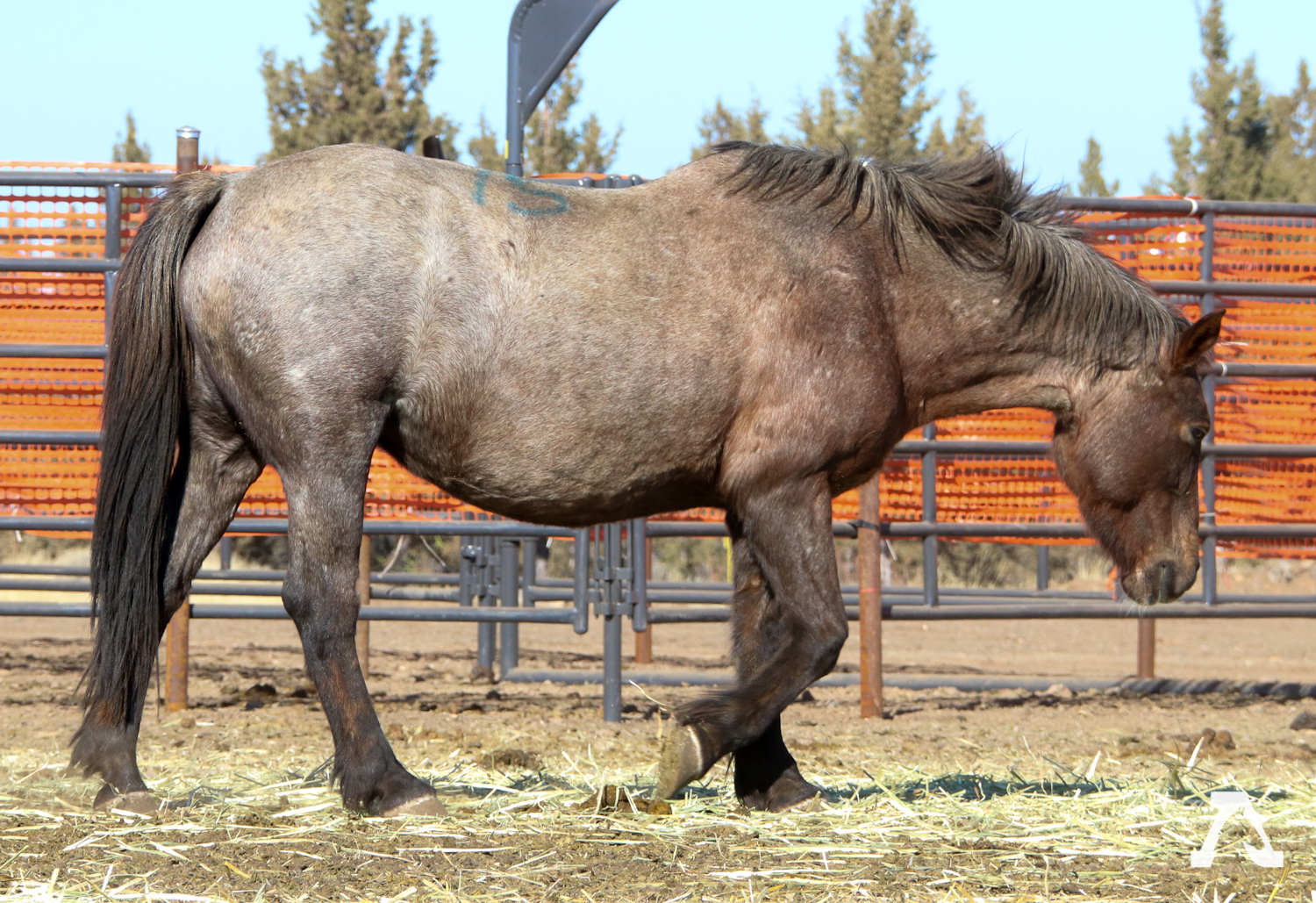 The predictable result of putting these inexperienced and uncaring people in charge was chaos, ineptitude, and trauma to horses as well as possible injuries.

While being escorted by Susie Johnson, a Forest Service staff member, to look at older or special needs horses for possible placement into sanctuaries and rescues, we stopped at a pen with about 25-30 geldings. Lying near the front was a small chestnut, estimated to be around 20 years old, in a small group of horses. In fact, a few minutes earlier, Leigh Sevy, Forest Rangeland Management Specialist, had approached me and a member of the volunteer placement group that found homes for horses captured in the 2016 roundup and has been working to place the horses currently in the pens at the Double Devil Corrals.

Ms. Sevy was interested in placing the senior gelding because she was worried that he was stressed from being beaten up the bigger and younger horses.

Ironically, just after she left to make arrangements to move him into safer holding, two wranglers on horseback entered the pen to sort out a horse who was either sold or adopted. The plan was to separate him from the other horses and move him through an open gate at the far corner of the pen and into an aisle that lead to the loading area for trailering.

When the wranglers began to push the horses to where the older horse was still lying, however, a few people outside the pen asked them to stop because they were concerned that the wranglers couldn’t see him and that he could get trampled.  In the response, one wrangler dismounted and got the horse up.

But after that, the chaos began. As the wranglers continued to move the horses around the pen, trying to get the adopted/sold horse into the aisle, the other horses began to stampede, circling around and around the tight space of the 60’ x 60’ pen.  At least one horse fell while others ran into the aisle and charged back out, with many of them crashing into the gateposts. This continued for several minutes, with the wranglers never backing off their efforts to move the horses.

When I asked a Forest Service official watching this mess unfold who was responsible for hiring and training these wranglers, he responded “Laura Snell” and that the wranglers were learning as this was all “a new experience.”

Almost immediately after this conversation, Ms. Snell came rushing over from the loading area to the same Forest Service official, complaining that “members of the public” were interfering with the wranglers’ work! One of the people she was referring to was me – simply for observing and raising concerns about the safety of the wranglers’ actions.

In the past 10 years, I’ve attended over 15 BLM wild horse and burro adoptions across the country where hundreds of horses and burros have been sorted and loaded into trailers. Never once have I seen such utter bedlam.  Although there’s always some commotion, it’s minimal because the staff handling the animals are experienced and the pens, aisle, and loading area are well-designed. For example, the pens are smaller with fewer horses and staff sort the horses by walking into the pens and strategically waving white flags to separate them.

Also, the loading area consists of a narrow chute with six-foot panel sides and several sections that close behind the horses as they’re pushed into trailers eliminating their ability to turn around or jump out of the shoot.  Because loading horses can be dangerous and traumatic for the horses and people, BLM only uses staff and trained volunteers to do it.

This was not the case at the Double Devil Corrals. First, the loading area was a square pen made of six-foot round pen panels and no BLM-style chute. Therefore, as horses approached the trailers, they were able to spin and scramble around it. I saw one horse fall, and there was a report of another horse jumping out of the loading area. Second, contributing to the chaos was the inept personnel loading the horses. Among them was Ms. Snell and her intern, neither of whom have any experience working with wild horses let alone loading them into trailers. This was especially evident by their random waving of white flags to move the horses, which appeared to only agitate them even more.

It’s inconceivable that Ms. Snell and the intern could think of themselves as being qualified to assume this responsibility, or that anyone at the Forest Service – which is ultimately in charge of this operation – would allow them to assume it. 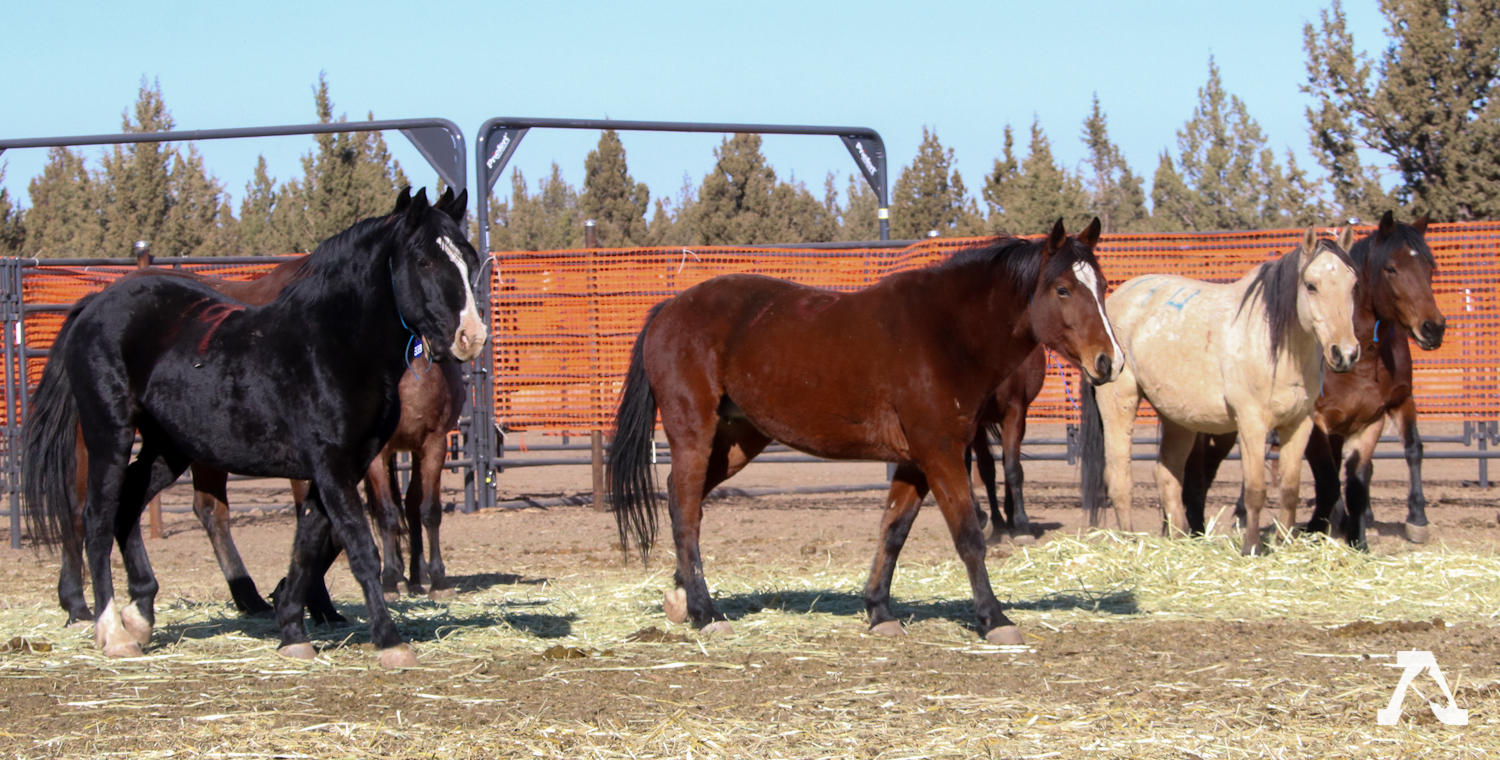 Before leaving the adoption and sales event, I complained to Amanda McAdams, Modoc National Forest Supervisor, about the handling of the horses as well as the Modoc County Farm Bureau and Ms. Snell’s role in this event and the management of the Double Devil Corrals.  AWHC will also file an official complaint to Randy Moore, Regional Forester of the Pacific Southwest Region, as well as a request for the following information:

AWHC also has ongoing concerns about the

Final Tally and Thoughts on the Adoption/Sale Event 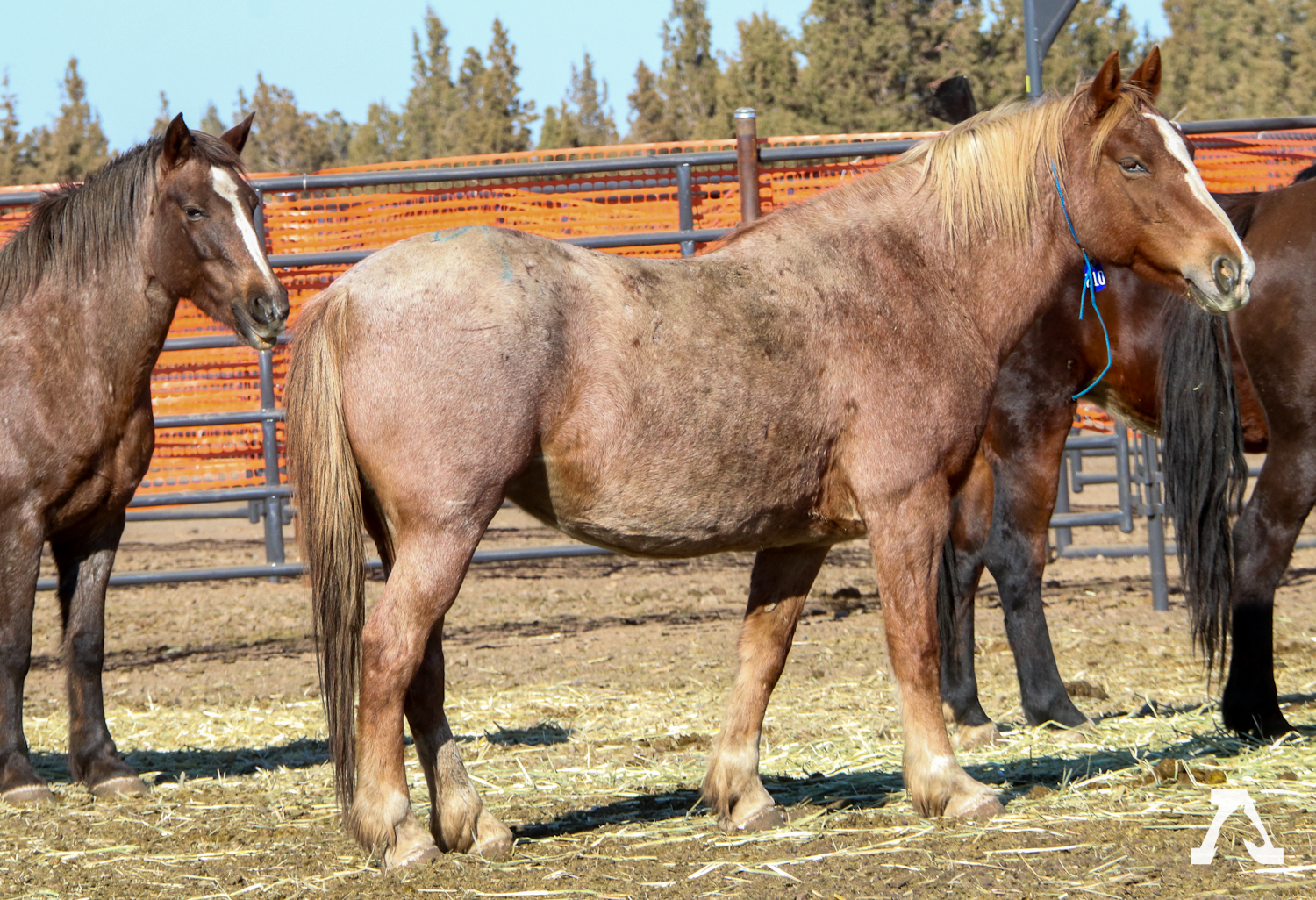 According to an inventory list issued on Friday, there were 261 horses at the Double Devil Corrals: 141 mares, 69 geldings (a number of them recently castrated with blood still visible), and 52 stallions still needing to be gelded. One 20-year-old mare was reported as dead.

As of late Saturday afternoon, 20 horses were adopted and 24 horses age 10 or over were sold (with limitation on slaughter) – including mares and geldings. My understanding is that no one individual took more than four or five horses, and they all went to trainers, legitimate adopters, or rescues.

Several mares have foaled at the Double Devil Corrals, but only one delivered a live foal.  The mare and foal were adopted as a pair this weekend. The exact number of miscarriage has not been reported. Many mares in holding are also pregnant.

Finally, I send my appreciation to these Forest Service staff: Susie Johnson and Sally Carter for their help updating the placement status of horses and identifying and locating horses for me; Leigh Sevy for her concern about the 20-year-old gelding and her efforts to move him and older horses into separate and safer corrals; and Amanda McAdams for her time to listen to my complaint and concerns.

Read Our Report from Day One