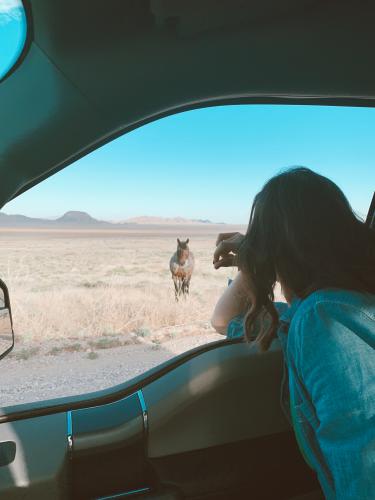 In celebration of National #PublicLandsDay, we're sharing our staffers' own most memorable wild horse experiences on public land. These are their personal accounts. We hope they’ll inspire you to get out there, explore public lands, and learn more about free-roaming horses and burros.

Author’s note: When we decided to create this blog series, I tasked myself with writing something short. I failed in this task, but I hope this resonates with fellow explorers, horse folks, and sentimental souls.

In July of this year, on the cusp of my 38th birthday, I traveled to Utah with my heart set on seeing wild horses for the first time. Before dawn broke over Utah, my colleague, Grace -- a fierce animal advocate and veteran on the wild horse issue -- turned the key in our rental truck's ignition and handed me handwritten directions. Our destination -- a viewing spot on Onaqui Mountain HMA (herd management area), known by locals, ecotourists, and wild horse photographers for setting up explorers with a good chance at seeing wild horses. A craggy dirt road drive outside Tooele held a whispering promise -- that my childhood dream of seeing wild horses would come true.

When I was small -- maybe 5 years old -- I told my mother I wanted to be a bag-lady on horseback. I wanted to literally ride around the great state of Texas picking up litter from the side of the highway. I'd just started riding lessons and "Don't mess with Texas" was a thing. At the time, we lived in San Antonio while my dad was stationed at a nearby air base. That specific childhood aspiration never came to fruition, but my devotion to horses and public lands preservation has only continued to grow.

Out on the Onaqui land in Utah, Grace switched the truck to 4-wheel drive. The sun crested over Davis Mountain, the mustangs hadn't been where we'd hoped, and we chose another road where fresh piles of manure promised an eventual sighting. The rutted road grew steep and Grace skillfully slowed-sped-slowed to maneuver over the rocks and prevent a flat tire. We drove and the sun followed. I prepared myself to come up short on this trip. Sometimes adventure pans out. Sometimes you come back with folly-filled anecdotes and so much grit on your teeth that you're determined to try again, anyway.

In '92, my sister and I piled into our Taurus station wagon as my mom patiently ‘sag-wagoned’ for my adventure-minded father who decided he needed to bicycle through Death Valley and then summit Mount Whitney, all in one fell swoop. We lived at Edwards Airforce Base in the Mojave, then. His optimistically planned duathlon through the wilderness left us girls sleeping underneath the stars in Death Valley. It was so hot that night, we slept in our swimsuits. I'll never forget the bravery on my mother's face (in the days before cell phones) and the wonder peeping through my little sister's bifocals.

On that trip, the Taurus overheated twice, my sister pocketed tiny handfuls of rock, and Dad had to turn back near the top of the mountain due to a late-season snowstorm. On that trip, it occurred to me just how many stars there are in the night sky, how abundant the desert is, despite little rainfall, and that as a family, we’d experienced something really special. We'd gone outside, we'd slept on the bare earth. We'd seen valleys and mountains that gave mind-blowing context to what I’d seen in textbook photos. I returned home enamored with the shadows clouds make across land when it's flat for miles. I wondered what wildlife lived beyond the winding pavement, deep into the desolate high sierras. On the car ride home, my father sat in the passenger seat ruminating on defeat. From the seat next to me in the back, my sister asked for a rock tumbler while she kept a keen eye out for ravens and falcons.

When Grace and I reached the end of our dirt road, we parked, guzzled water, and surveyed the thousands of acres our eyes could see. My eyes focused on a dark spotting on the landscape in the far distance. It appeared that a herd of wild horses and circumvented our route and mosied back down to the valley from where we’d just traveled.

Grace grinned and handed me the keys.

I got in the truck, adjusted the seat, mirrors, and wheel like an adolescent about to take her driver's test. Adrenaline threatened my navigation back down that road, but Grace kept me present with her cool caveats.

It could be cattle. There are more cattle out here than horses. It's likely cattle. She kept her eyes on the black dot. It reminded me of those cloud-covered shadows I'd seen as a kid when we drove through the belly of California.

Back down at the base of the dirt road we'd started out, I slowed to a stop so we could take another long look in the distance. Before the dust could settle around the truck, our ears perked to a thunderous sound coming from the driver's side - my side. A dust cloud formed in the distance.

It's them, I remember hearing Grace. Her voice echoed my anticipation. We should move the truck further out of their way. But there was no time, so we stood still from the ledge of the cab and waited.

Within seconds, a band of wild horses flew out of the hillside. They galloped straight toward us They were a family. A stallion, at least a couple of mares, and a yearling. Their lead mare made a quick curve around us as directed by their stallion. They were a unit, their communication so subtle, so intuitive, that I can only dissect it from memory. They snorted the dust out of their nostrils - a sound I'd heard a thousand times from domestic horses back home, but this time, with no other sounds but the present hush of nature, every noise they made sounded foreign. Every toss of wind in their manes, ethereal. They were the very nature of wild.

And then they were gone. We grabbed our phones and snapped a few photographs as they galloped away from us and toward that shadow in the distance. The dark spot on the land had been one of the large herds all along.

I realized then that my entire body shook. My sight had gone blurry and my chest felt tight, like I might burst into happy sobs. I wondered if Grace thought I was an idiot in all my blatant awe, but as I convinced my head to look away from the dust and toward her over the roof of the truck, she had tears in her eyes too.

We stood for another minute and watched the band join the herd. We realized it had gotten late in the morning and that we were hot. We started the truck again, turned on the A/C, and popped open our water bottles. Every noise as we drove on would sound amplified with artificiality, every surface cold and rigid, compared to what we'd just witnessed.

I kept driving. We did see more horses that day. At high noon and again through a stunning sunset that bathed the brush and adjacent mountains in vivid yellow warmth. It bathed me too. I thought about my 5-year old self, my 11-year old self, and all the moments in my 38 years where my world expanded and my mind refilled with childlike curiosity to explore.

My hope is that the generations after me have the same opportunities I've had to witness this wild world, too. My sister, who still loves rocks and nature and roadtrips, is now a mother. And her son deserves his own experiences on public land, down whichever road he decides to travel or mountain he decides to traverse.

Every one of us should experience every bit of what's out there, and if I have anything to do with it, that will include wild horses roaming free on our treasured, American public land.

Jennifer Caudill is a Communications Associate for the American Wild Horse Campaign. As a writer, she is responsible for crafting and managing editorial, managing written responses to the media, and building a library of resources for public education. Jen resides in Northern California with her dog, Poppy. When she’s not defending wild horses and burros or backpacking public land, she’s hiking with Poppy through nearby parks and seashores.