(March 20, 2020) One of the more egregious plans the Bureau of Land Management (BLM) has released for “management” of wild horses is the ovariectomy via colpotomy experiments. Here is a brief history on how AWHC and our coalition partners have been integral in stopping these cruel experiments from being performed on wild mares from the Warm Spings Herd Management Area (HMA).

Ovariectomy via colpotomy being performed.

In 2016, the BLM planned to conduct a series of sterilization experiments on wild mares at the agency’s corral facility in Hines, Oregon. The experiments on 225 wild mares were set to be conducted by the staff of Oregon State University (OSU). The study implemented three sterilization techniques: (1) ovariectomy via colpotomy, (2) tubal ligation, and (3) hysteroscopically guided laser ablation of the oviduct papilla. A primary goal of the BLM’s plan was to determine the “social acceptability” of each type of sterilization procedure. Yet, the BLM refused to allow any public observation of the procedures. AWHC and the Cloud Foundation filed a Preliminary Injunction (PI) to halt the experiments. With the threat of PI, the BLM withdrew the experiments. 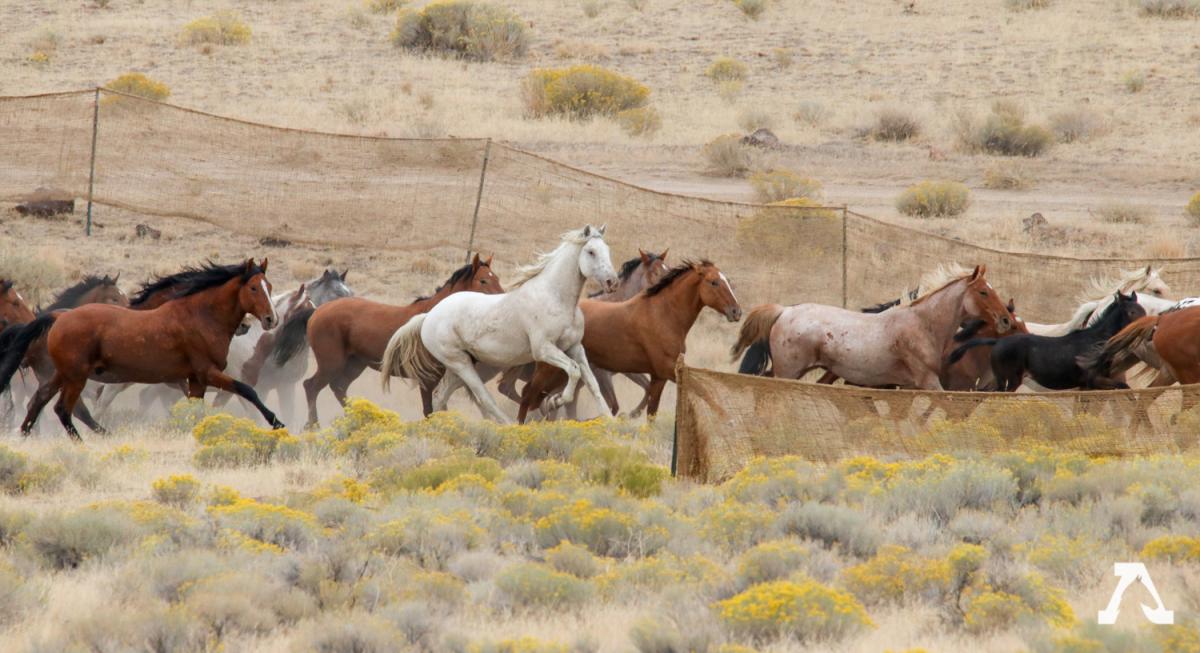 Beautiful wild horses from the Warm Springs HMA being rounded up for the study.

In 2018, the BLM chose to move forward with similar sterilization experiments. However, this time the agency has chosen to only perform ovariectomy via colpotomy on wild mares at the agency’s corral facility in Hines, Oregon. The experiments on 100 wild mares were set to involve the staff of Colorado State University (CSU). However, after the close of the comment period on the EA, CSU withdrew from participation in the study. Without CSU, the BLM had no plan to conduct welfare observations of the mares during the procedures. This is a critical component to aiding the agency in determining whether or not the procedures are humane as required of all BLM’s wild horse management under the WHA. In contrast to its 2016 plan, the BLM allowed for limited public observation. However, the provisions that the BLM has provided are extremely inadequate and still infringed on our First Amendment rights.

AWHC again joined forces with The Cloud Foundation and Ginger Kathrens for this lawsuit, and this time we were also joined by the Animal Welfare Institute and Carol Walker, a wild horse photographer (collectively the Plaintiffs). On September 21, 2018 Plaintiffs filed a complaint and PI in the Federal District Court of Oregon to challenge the BLM’s decision to seriously limit public access to observe and document these sterilization experiments. The judge granted the motion for a Preliminary Injunction on two of the three counts raised in our motion. This action halted the experiments, which were scheduled to begin November 5, 2018 and the government later abandoned the experiments as a result.

The BLM released yet another EA in pursuit of the ovariectomy via colpotomy experiments. At this point the mares have been in holding for roughly a year since the roundup and have had their foals in holding, meaning that none of the mares would be pregnant at the time of the procedures. Therefore, the major difference between the last 2018 EA and this one was the disclosure that mares would not be pregnant at the time of the experiments.

Around the same time as the BLM released the 2019 EA, the government filed a motion to dismiss the case we had against the 2018 EA (which the government withdrew in response to the court granting our PI). Since the 2019 EA implemented none of the observation considerations which granted us our PI, we decided to file a motion for a stay until the final decision was released. If the agency moved forward with a substantially similar plan like the one which the judge had just reviewed, we would want to notify the court of this event. The judge granted our motion to stay until the BLM released its final decision. In the meantime, both parties are provided court-ordered updates on the status of the decision and the case. The BLM has not released a final decision on the 2019 EA.

In an oral argument on the motion to dismiss, held over telephone on March 19, 2020 due to Coronavirus concerns, the court ultimately granted the government’s motion to dismiss. Importantly, during oral argument, and in many filings with the court, the government stated that it has no intention to move forward with the 2019 EA and that it even has no intention to move forward with an experiment involving the horses from Warm Springs. The government further stated that if it wanted to move forward with similar experiments, it would have to conduct a new National Environmental Policy Act (NEPA) process before it could do so. This process would come with a new EA and new comment period. If the government does start a new process, we will monitor it closely and provide you with the means to comment at the appropriate times.

A WIN FOR THE HORSES

The key takeaway from this history of litigation is that with your support we have successfully prevented the BLM from pursuing the surgical spay of mares from the Warm Springs HMA in Oregon. While the fight to prevent BLM from ever implementing this procedure is far from over, this is another major win. Thank you for your support and dedication to our wild horses!