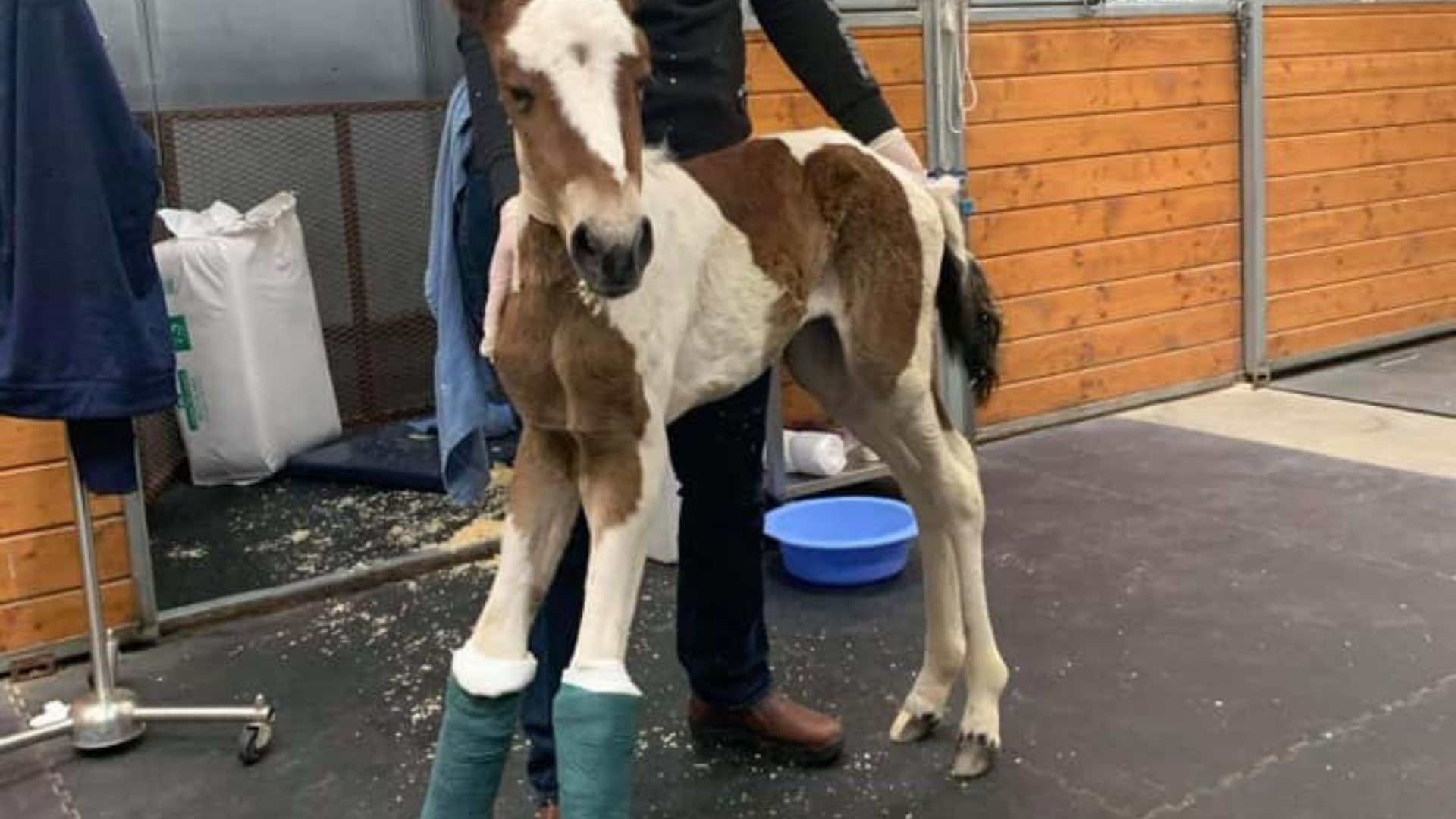 Local Partners Work to Save Foals on Nevada's Virginia Range

Local Partners Work to Save Foals on Nevada's Virginia Range 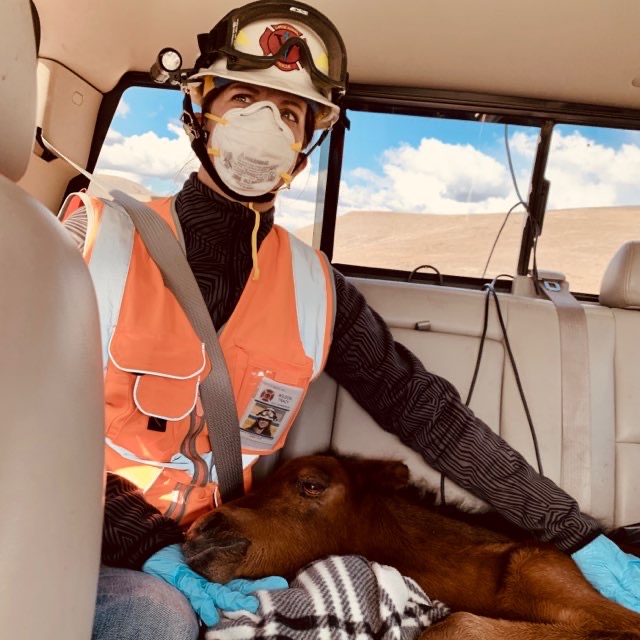 (December 27, 2020) With the holiday season upon us, AWHC thought it would be the perfect time to share a heart-warming story about a dedicated coalition of organizations and its amazing work to save wild foals in need on the Virginia Range and surrounding habitats in Nevada.

While AWHC is spearheading the highly successful PZP fertility control program on the Virginia Range, we’re pleased to support this important community program with not only our volunteers but also our foal rescue fund that provided grants to assist with the construction of a critical care nursery at a partnering equine rescue, the purchase of live-saving foal rescue kits and veterinary care, and the retrofitting and maintenance of a donated ambulance used as response/transportation vehicle.

Although wild horses live in close-knit families and mares are loving and protective mothers, sadly foals can become injured, orphaned, or abandoned.

Sometimes it’s a result of a horse-human interaction, such as a mare being killed after being hit by a car. Other times, it’s nature – a mare will die, perhaps after giving birth, or a foal will become separated from his/her dam when a band scatters during a stallion fight. At times, the foals themselves become ill or injured – maybe from predator attacks – and survive but are left by their bands.  Without their mares and family, they’ll most certainly suffer and die alone.

“Working collaboratively is a must,” says AWHC Nevada Field Representative Deb Walker. “Each part of the team has its own specialized job during a foal rescue. We’re well aware of who does what, and, as a result, the team flows together without a hitch to help the foal in need and Virginia Range wild horses in general. It’s a thing of beauty!”

"AWHC is pleased to play a key role in this rescue program via our Foal Rescue Fund," Walker concluded.

This year the foals ranged in age from two hours old to several months old.  They include: 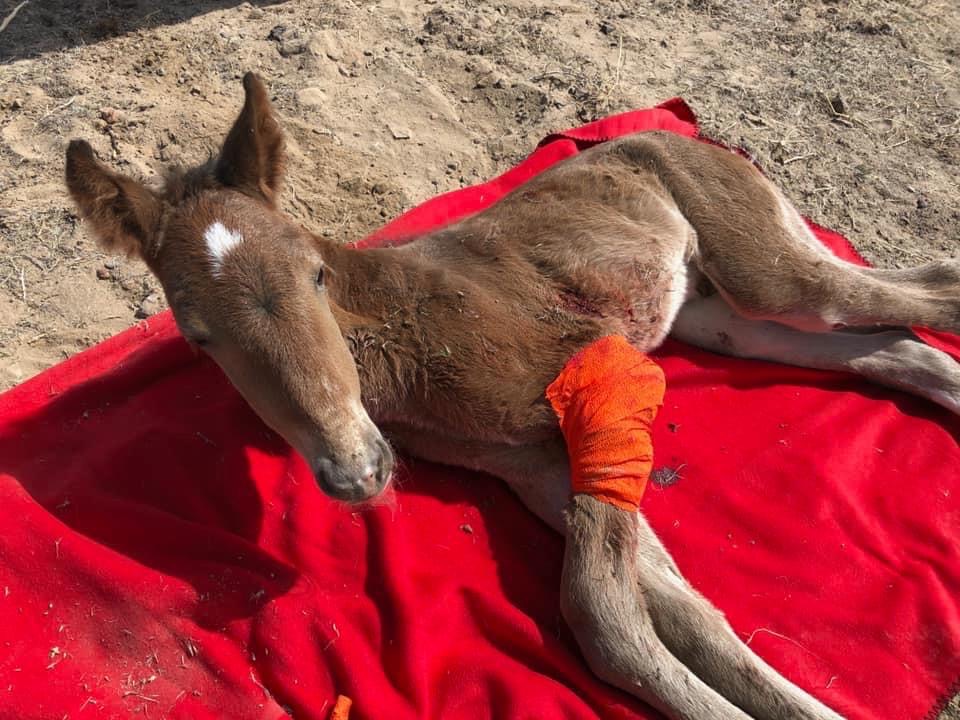 According to Tracy Wilson, an AWHC volunteer and Least Resistance Training Concepts/Technical Large Animal Rescue Assistant Supervisor, wild foals in distress are located in a variety of ways.  Sometimes, for example, volunteers from AWHC’s PZP darting and documenting program who are out on the range every day report them.

While saving any foal in distress is difficult, a wild foal can present even more challenges.  On the range, personnel familiar with the various wild horse bands and skilled in handling wild horses are needed to not only determine if, indeed, a foal is orphaned or abandoned but also develop the best plan to help him/her.

Sometimes foals need to be removed because, for example, their injuries are very severe or their mothers can’t be found.  Often these foals require veterinarian attention, which may include hospitalization to stabilize them before they can be transferred to LBL Equine Rescue. Recently, thanks to generous donors, it completed the construction of its critical care nursery that is fully equipped to provide around-the-clock intensive care for foals with life-threatening conditions.

This spring, however, the rescue team began implementing a new strategy – trying to keep foals on the range as part of the shared vision to keep all Virginia Range wild horses wild and free. 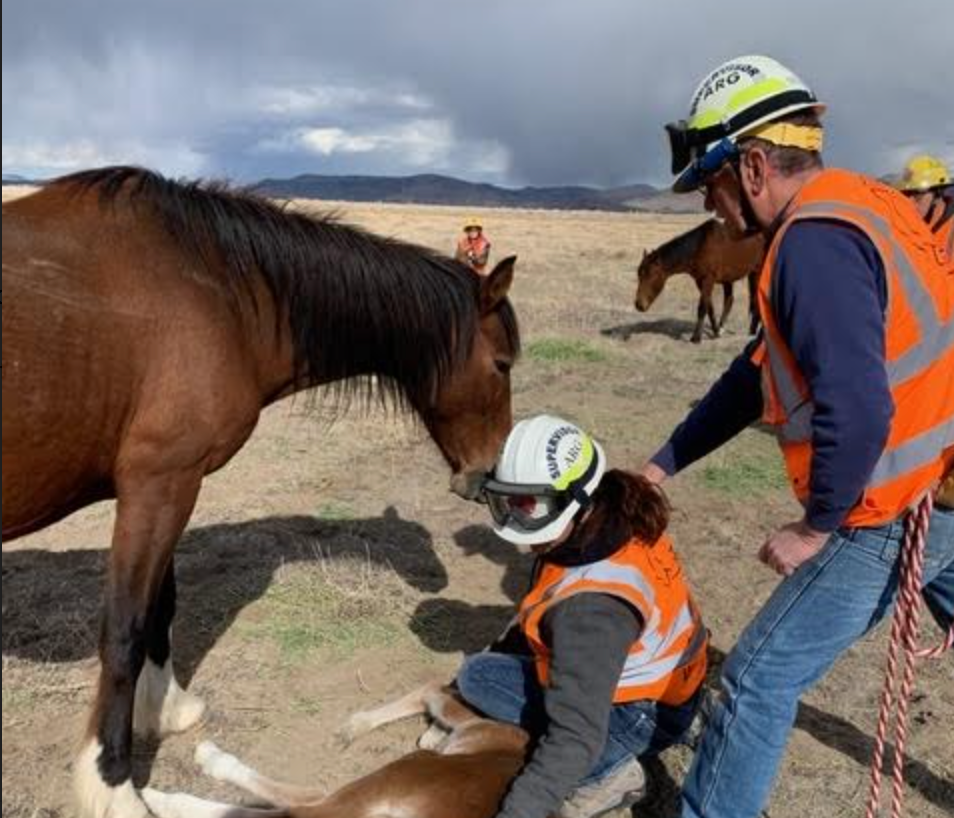 As Deb emphasizes, “Whenever possible, we want to treat a foal very quickly in the field and return it back to the family band.  That way, the dam can provide it with the best care, and it can grow up and remain wild.”

This summer, for example, Rustler, a two-day-old colt with severe impaction, was discovered on the range.  For three days, the rescue team followed him as well as his mare and band in order to give him enemas and mineral oil.  When he finally passed manure, the team continued to monitor him to ensure that he was out of danger.

As one of the main responders, Tracy explains the coordination needed to help Rustler and the rewards:

During our initial treatment, we were able to carefully grab and hold Rustler. Initially, team members were positioned to keep his dam, Rustann, back while I worked with him, but she was getting more and more upset.  One team member was prepared to drag me backward and clear of danger until our Incident Commander called for everyone to freeze.

At that point, Rustann stepped forward and placed her nose next to my ear, smelling me, and evaluating the situation. She then took a step back and stood watch while allowing us to administer the enema to little Rustler.

In the two subsequent treatments, Tracy says that “Rustann repeated her close inspection by coming in close to my head to smell me and then stepping back to allow her colt to be treated.”

According to the latest reports, Rustler is doing great, running and playing and growing like a normal foal.

FOAL RESCUES KITS AND “THE BEAST” 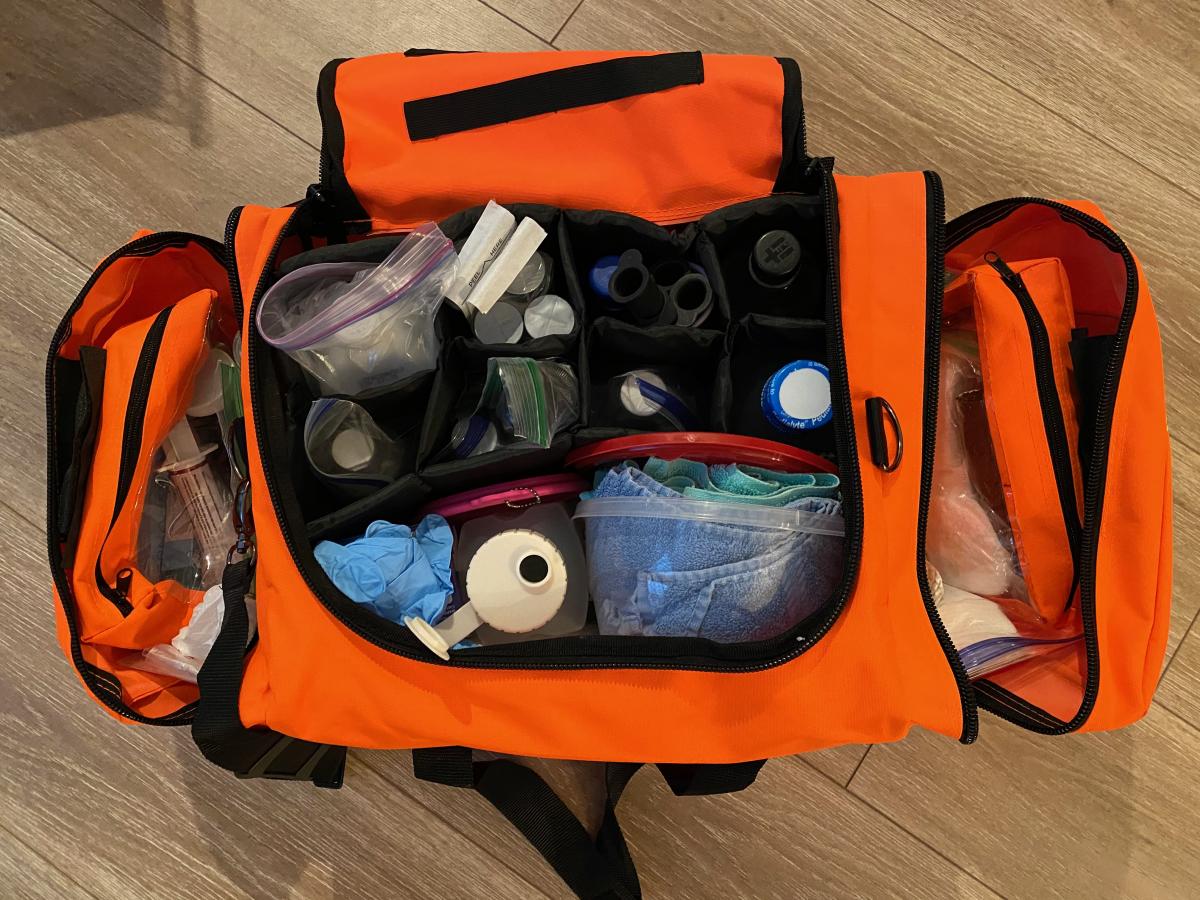 Two exciting new additions to the rescue team have been essential in increasing the number of successful foal rescues this year – and in the future.

First is the foal rescue kits that are distributed to teams of volunteers and include supplies such as saline solution, wound ointment, colostrum replacement, Foal Lac milk replacement, electrolytes, and enemas.

As Deb explains, because foals can crash quickly – and especially those who haven’t had a chance to nurse – having the kits in the field plays an important role in giving these babies the best possible chance for survival.

Then there’s the decommissioned ambulance that was donated to Least Resistance Training Concepts’ Large Animal Rescue Team and converted into an Incident Support Unit and Foal Transport vehicle – nicknamed “The Beast.” Furnished with an internal supply of electricity, water, and oxygen, it serves not only as anchor vehicle for foal rescues on the range but also a transport vehicle that allows team members to continue emergency treatment en route to a veterinarian facility.

As mentioned, keeping foals wild and free on the Virginia Range with their mares and family bands is always the preferred outcome.  However, for foals who have to be removed, after LBL Equine Rescue provides intensive care and rehab, Wild Horse Connection places them through its adoption program.

So far this year, three foals have found their way into one family’s heart and home. Yes, that’s one family!  Although they came to meet Survivor, who was rescued after being found underweight and following an unknown band, then later running alone down a roadway, one of the daughters fell in love with Carter. But because Carter was bonded with Sinclair since arriving at LBL as foals after being separated from their mares, Wild Horse Connection asked the family to consider taking both – And they did!  Today, the small herd is thriving.

Additionally, other foals are ready for adoption. There are Eley and Jahan, seven-month-old colts who lost their mares due to tragic vehicle accidents; Calico, a gorgeous filly who ended up by herself after a band shake-up; and Ross, a colt who was injured and also lost his dam to a vehicle collision.  If interested in providing forever homes to them, please contact Wild Horse Connection at info@wildhorseconnection.org

With the 2021 foaling season fast approaching, we expect to see fewer foals on the Virginia Range as a result of AWHC’s growing PZP fertility control program. But should problems arise with any of the little ones born into this historic herd, be assured that the foal rescue team will be ready!