(July 13, 2021) To know Firecracker is to love him, he’s a survivor. He started out in life with several obstacles but managed to survive them all and is living a happy healthy life, wild and free.  He was born in July of 2018 to Excaliber Momma but a few months later she died leaving Firecracker orphaned.  (AKA Little Orphaned Andy by the locals).  He was born a very small pinto with the most unique markings and hasn’t gotten much bigger even though he is almost three years old.

At the time of Firecracker’s birth, he and his dam were in Goldie’s band who also traveled with Flashy’s family.  Both of these stallions took very good care of Firecracker.  He was usually seen bringing up the rear of the family line as they traveled.  Since he was smaller, he walked slower than the rest of his family and his usual position was in front of Goldie or Flashy at the end of their line.

In the canyon, I often saw Flashy or Goldie give Firecracker a nudge as they walked up the mountain. Even though he needed a little extra help sometimes, Firecracker would always catch up. He was very much part of the two-family bands

In August of 2019, I was so surprised when I saw Firecracker standing in a field all alone and his bands were nowhere to be seen!  I’m not sure how or why he was alone, but I know that they couldn’t have been separated by choice. Something must have happened unexpectedly, and he was orphaned again.

A few days after that, I saw some horses on a hill fighting.  When I went to see what was going on, I saw Firecracker standing there, which was several miles from the empty field where I last saw him alone. He was standing there watching a fight between a mare and a stallion!  It was a heated fight, as the stallion was trying to adopt Firecracker into their small band of three, the stallion, a mare, and a filly.  The mare was resisting this by kicking Firecracker trying to get him to leave while the stallion continued kicking the mare trying to keep Firecracker!  This went on for quite a while and they ended up finding themselves in the foothills of the Virginia Range. I stayed to watch to make sure none of them were hurt.  Finally, they all calmed down and I followed them over to the nearest shade tree, where they stood to cool off for a while with Firecracker as part of their band.  I called Cathy Cottrill and explained to her what had just happened so that the LRTC TLAR Team could keep an eye on them.  I sent Cathy a few pictures and she told me the stallion was Longhair, his mare was Hidden Marble and her filly was Val. 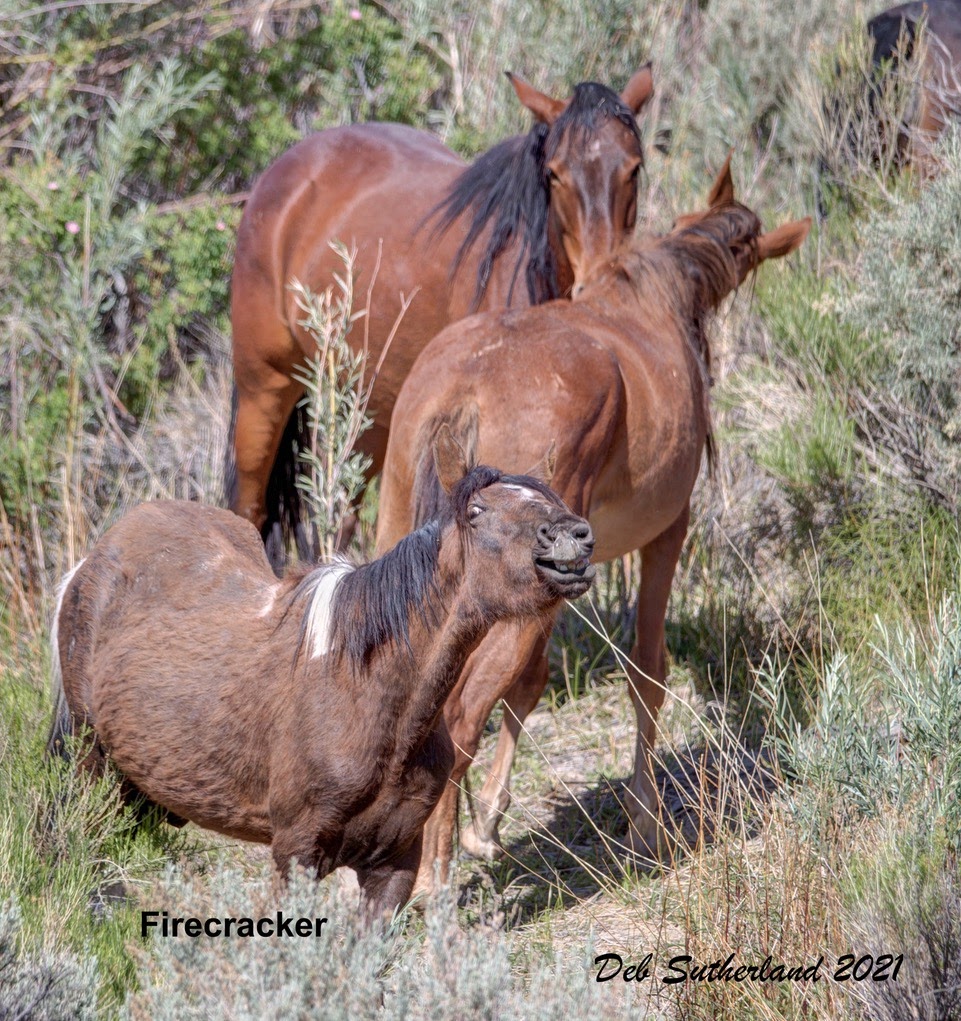 A few days later, I heard a horse frantically calling out, so I went out to see who it was, and it was Firecracker!  He was alone again, frantically crying out for his band.  I searched the area and found Longhair not far away, just around the corner, but Firecracker couldn’t see them.  A few of us safely put pressure on to move him and helped him get back with his family. All together again, the band headed for the canyon and I didn’t see them at all until this year (2021). I was in the canyon and spotted Firecracker immediately bringing up the rear of his now large family band with Longhair nudging him up the mountain.  Firecracker turned my way and gave me the funniest, happiest look.  It was heartwarming to see that Firecracker is still a part of Longhair’s family and that he is looking happy, healthy, and that he’s not an orphan anymore.