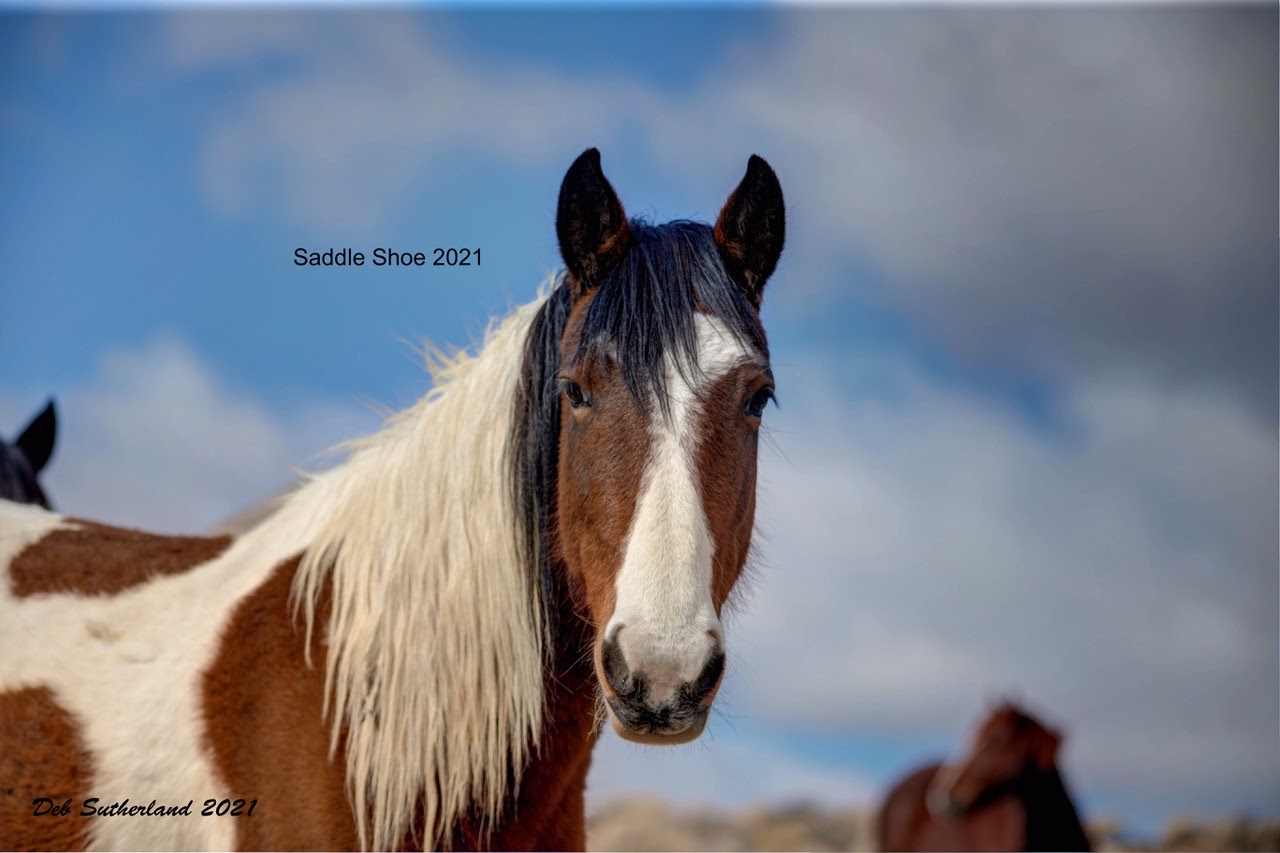 Saddle Shoe (AKA Lil’ Bossy) was born in a canyon in the Virginia Range near the springs where many bands would gather in the spring and summer.  Her sire was the black and white pinto Canyon Phantom who lived his whole life wild and free on the range. The year Saddle Shoe was born, 2012, Canyon Phantom had several mares and a large family band of roans, pintos, and buckskins. 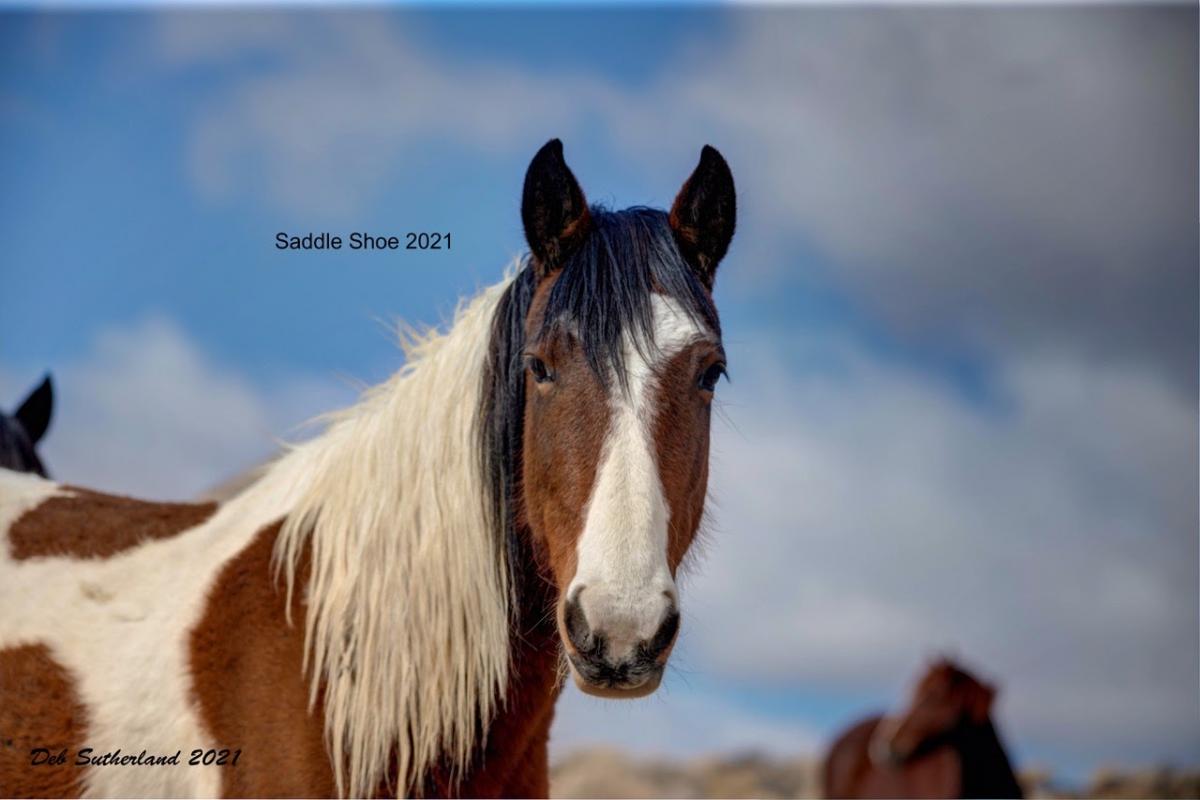 Saddle Shoe’s dam was one of Canyon Phantom’s buckskin mares we called Grandma because her hind feet were so bent looking, she walked like an old horse even as a young mare.  After I became a documenter, it was interesting to find her in the database with the name “Broken Hinds”. I knew exactly what that meant, her crooked back feet. Broken Hinds and Saddle Shoe were always seen together during the first few years of her life.  When I visited them in the winter, they would be seen snuggling in the snow. On hot days they would stand side by side and drink from the spring. 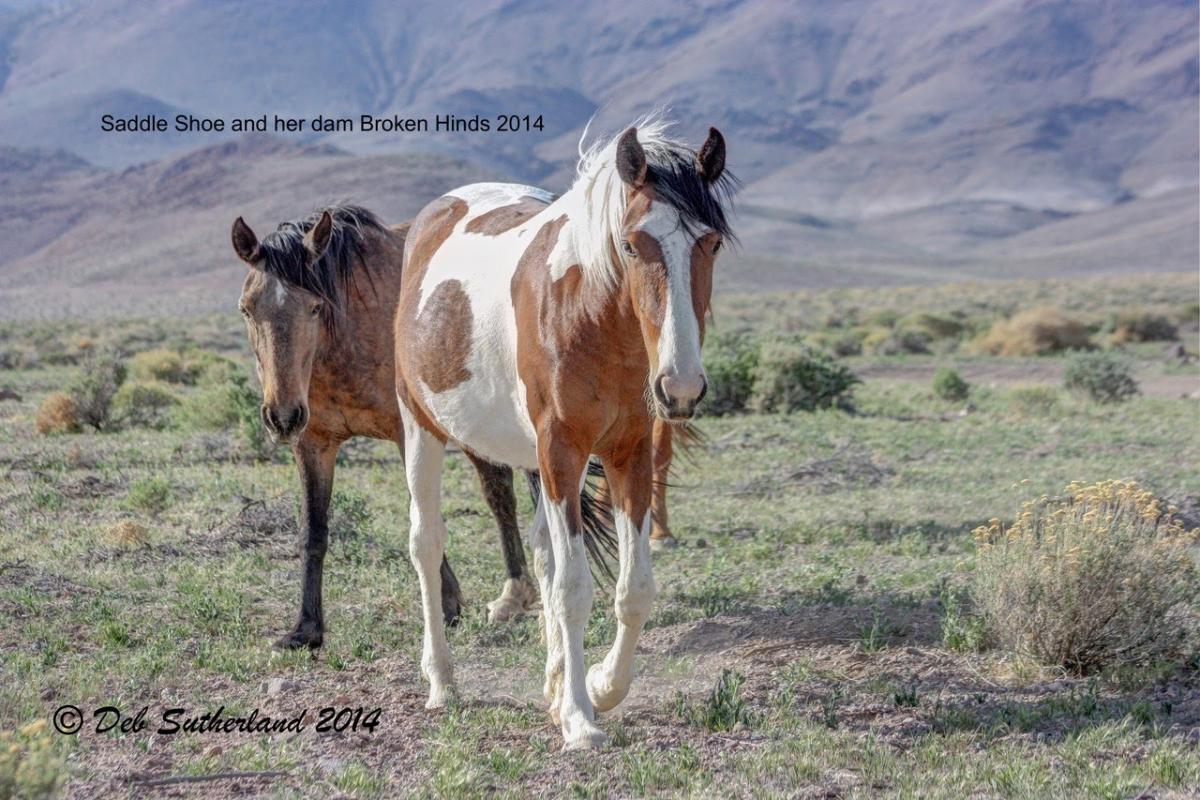 Saddle Shoe had many half-siblings who were also born in 2012. Her half-brother, the gorgeous buckskin Shaggy, still lives in the Virginia Range with a family band of his own.  His dam was Canyon Phantom’s roan mare Maxey who is now in Black Hawk’s band.

When Saddle Shoe was a few years old another pinto bachelor joined their band.  We called this stallion Bossy.  He was Bodie Braveheart and Gingersnap’s son who bossed other horses around and people too, if they were near.  I started calling Saddle Shoe Lil’ Bossy back then because she looked just like Big Bossy only smaller and the two would run together and play in the canyon. Then one day, Big Bossy left to run around with some other bachelors. Shortly after that, Lil’ Bossy went with her first stallion and had her first foal, a colt I called Half Moon, a cute bay-colored foal with the shape of a thin, crescent moon star on his face.  He would be about seven years old now, but I haven’t seen him since he was born. 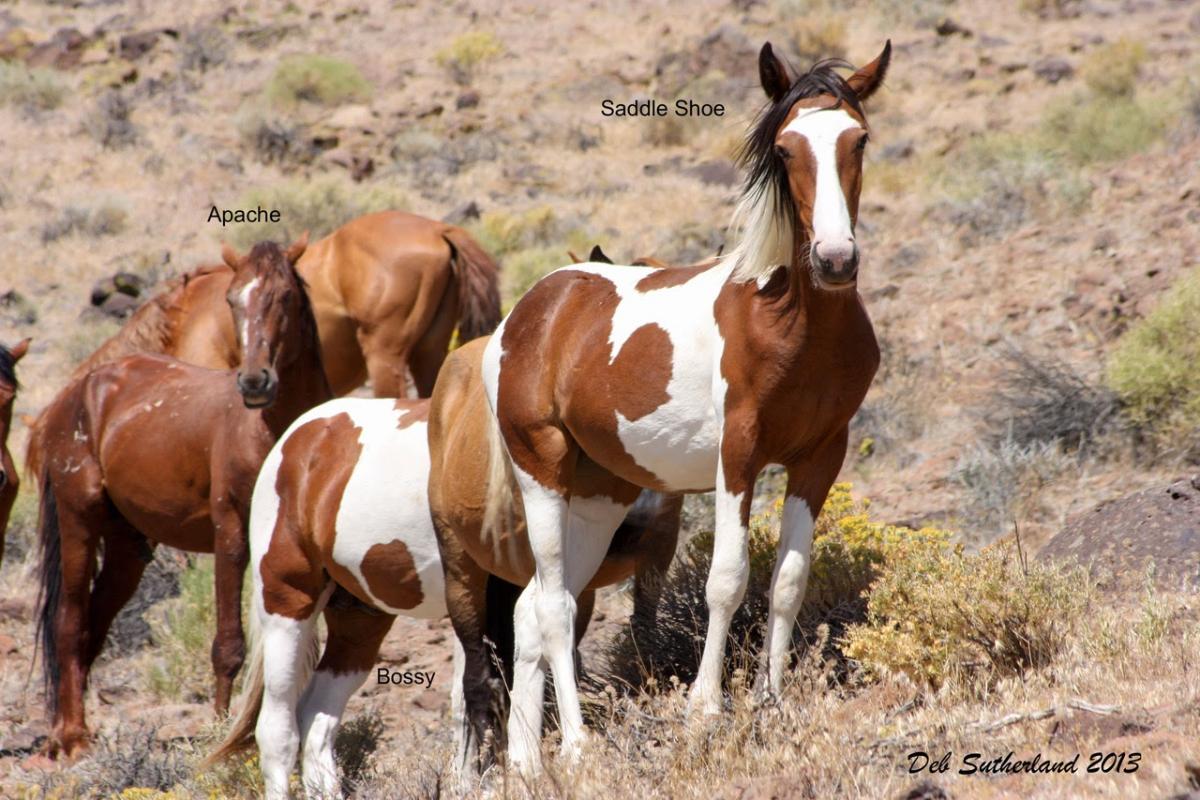 Almost a year after that, Two Socks stole Saddle Shoe after many fights with other stallions, one being Apache. Saddle Shoe lived with Two Socks for most of her life.  Saddle Shoe’s second foal, Little Saddle Shoe (AKA Honey May) was born under a pinion pine tree in the canyon on a spring day in May. She was the cutest pinto I had ever seen.  Her third foal was Saddle Shoe Jr., a gorgeous black and white pinto that looked just like his “grandfather” Canyon Phantom.  Saddle Shoe’s forth foal is sweet Natalie, who looks like her first colt and is still with her today. However, Tracker stole them from Two Socks sometime last year and he is now taking good care of Saddle Shoe and Natalie. Often you can see Two Socks and Tracker’s band traveling across the Virginia Range together, which is a beautiful sight to see.

Unfortunately, Saddle Shoe’s sire Canyon Phantom died Jan. 31, 2021 in the Virginia Range where he lived out his entire life of 21 years wild and free.  The last time I saw Broken Hinds was over a year ago standing but sound asleep.  I have not seen her since that day, but I’m sure I’ll run into her at some point.

Meet another mustang on the Virginia Range here.