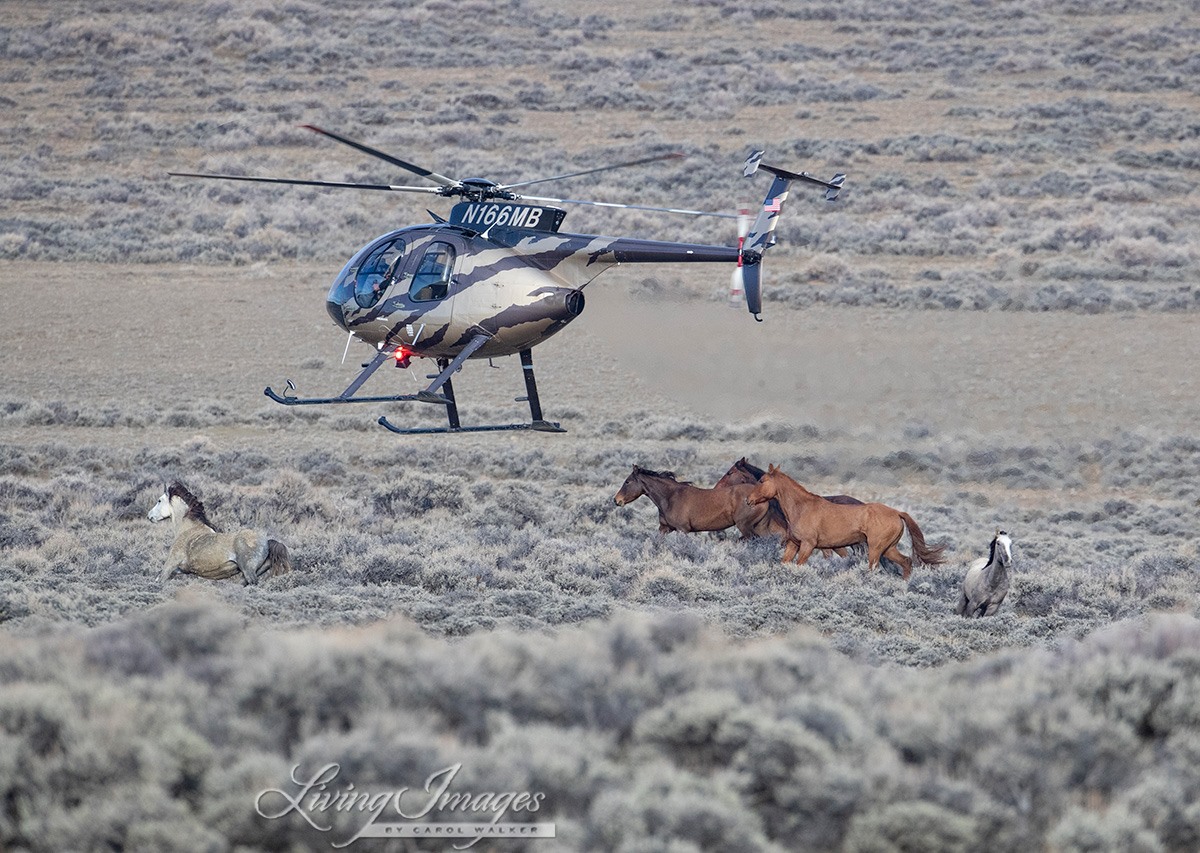 ROCK SPRINGS, WYOMING (Jan 19, 2022)—On Monday, the largest federal wild horse roundup came to an end. Launched on October 7, 2021and conducted by the U.S. Bureau of Land Management (BLM) across a 3.4 million-acre habitat area known as the “Wyoming Checkerboard,” the massive helicopter capture operation resulted in the roundup of 4,158 wild horses, the permanent removal of 3,650, and the deaths of  37 of these iconic animals. While the BLM attributed 27 of the deaths to “pre-existing conditions”, the American Wild Horse Campaign (AWHC), noted that the vast majority of the horses were “euthanized” for non-life-threatening conditions such as “swayback” or clubbed feet.

The captured wild horses will be sent to BLM-operated holding facilities in Rock Springs and Cañon City, while the remainder will be sent to a newly constructed Concentrated Animal Feed Operation (CAFO) in Wheatland, where they will be confined to feedlot pens that provide just 700 square feet per horse. Many of these horses will end up in the slaughter pipeline as a result of the BLM’s Adoption Incentive Program.

This roundup was rife with controversies, from alleged first amendment issues to alleged animal welfare violations.

With the completion of this operation, just 1,550 wild horses will remain wild — a density of 1 horse per 2,217 acres. Taxpayers will pay up to $170 million in capture and holding costs for the horses who will be replaced on the landscape by private livestock grazing, an activity that taxpayers also subsidize.

“The BLM’s reckless assault on Wyoming’s wild horses was unnecessary, inhumane and a colossal waste of our tax dollars,” said Suzane Roy, Executive Director of AWHC,  “It’s left the magnificent Red Desert landscape devoid of these majestic, federally-protected animals and feedlot pens crammed full of these formerly free-roaming animals. This is no way to manage America’s cherished wild mustangs, and it’s long past time for the BLM to stop the roundups and implement humane, scientific management with fertility control.”

The National Academy of Sciences recommended humane, reversible fertility control vaccines as a more sustainable management method for wild horses and burros under BLM management. Last year, both the US House of Representatives and the Senate included language in the Fiscal Year 2022 appropriations bills that would revert $11 million of the BLM’s funding away from the costly and unscientific roundup practices towards the implementation of a robust fertility control vaccine program.

“Congress recognized the importance of science and the will of the American people by taking steps to ensure our wild horses stay wild,” Roy continued. “It’s time for the BLM to do the same.”

More than 90 percent of forage resources on the public lands in the Checkerboard are allocated to private livestock grazing, with wild horses and wildlife left to survive on the scraps. Numerous environmental organizations have recently called out the BLM for its biased treatment of wild horses, which is “inconsistent with both the letter and spirit of the 1971 Wild and Free-Roaming Horse and Burro Act,” according to the 3.7 million-member Sierra Club. Other groups, such as the Sierra Club Colorado, Public Employees for Environmental Responsibility, and Western Watersheds Project, have called out BLM for scapegoating wild horses for ecological damage caused by livestock grazing.