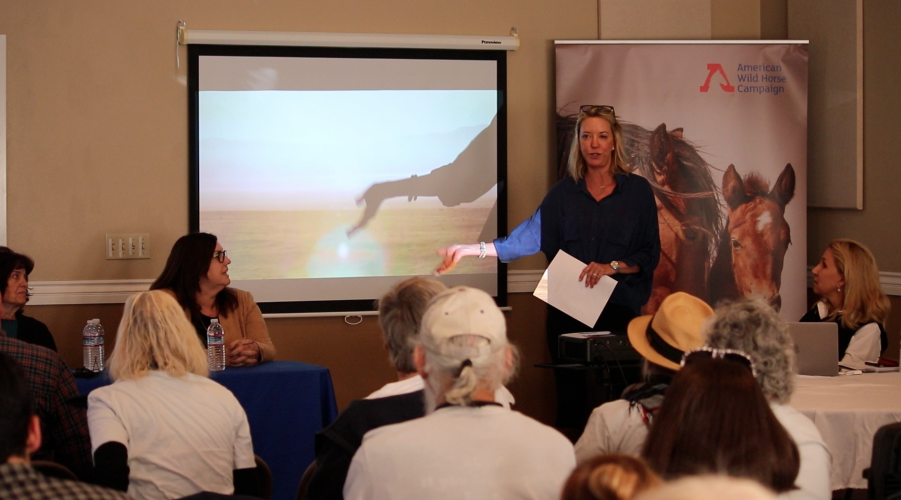 On October 23, 2019, AWHC organized a highly successful press conference in Reno to counter the messaging of an anti-wild horse propaganda film showing later that evening. The film, Horse Rich Dirt Poor, blames wild horses for destroying BLM lands in the West, without ever mentioning the far greater impacts of livestock grazing or the fact that wild horses are on just 12 percent of the public lands managed by the Bureau of Land Management (BLM).

AWHC Board President Ellie Price opened the press conference noting that “wild horses are victims of a sophisticated PR campaign to erode public support for wild horses by convincing the public  that wild horses are starving and overrunning the range. It’s a “Fake News” crisis, manufactured to convince the public and Congress to support a destructive plan to round up 130,000 wild horses over the next ten years – that’s every wild horse and burro living today on BLM land and 45,000 yet to be born!”

After, Ellie introduced Storey County Commissioner Lance Gilman and Northern Nevada business leader Lance Gilman spoke powerfully about how wild horses were being wrongly accused of overpopulating, breeding explosively and damaging the environment. He noted that at the Tahoe Reno Industrial Center, which he developed along with his business partner Roger Norman, the population of wild horses has remained steady over the last 15 years. Lance talked about the way in which the mustangs are part of the brand that has drawn companies — including Tesla, Google, Switch and Blockchains — to TRI and how he has conveyed to the businesses there the importance of protecting these local icons. As a show of support, Lance was joined at the press conference by his business partner Roger Norman and representatives from TRI companies Blockchains — a key player in the protection of the Virginia Range mustangs and Switch — an early supporter of AWHC’s Virginia Range fertility control program were in attendance as well.

Following Lance’s inspiring speech, AWHC Director of Field Operations Greg Hendricks talked about how he was invited to participate in the panel discussion following the Horse Rich Dirt Poor Screening, but that organizers would only agree to show AWHC’s video if the middle section showing the BLM acreage grazed by livestock vs. wild horses, was removed from the video. Not being willing to accede to censorship on the issue, Greg, on behalf of AWHC, declined to participate in the panel discussion.

Western Watershed’s Executive Director Erik Molvar, a wildlife biologist and expert on sage grouse conservation, closed the press conference with a forceful argument against the scapegoating of wild horses. “From the perspective of Western Watersheds Project, the nation’s leading environmental conservation group working to solve the widespread problem of poor range health on western public lands, cattle — not wild horses — are the main problem causing overgrazing and damage to native habitats on western public lands,” he said. “As a wildlife biologist whose scientific findings on large herbivore ecology have been published in a number of peer-reviewed scientific journals, I believe the contention that wild horses are the major land health problem, rather than domestic livestock, is fake news.”

The film screening that followed the press conference in another location was a lost opportunity for a true discussion of the issues facing wild horses and western public lands. The one-sided propaganda film was followed by a tightly controlled panel discussion, conducted under a format that prevented audience interaction, and carefully controlled the questions that were asked of panel members. Many audience members, sensing that nothing of importance was going to happen, left before the discussion was over.

All in all, we were successful in countering the anti-wild horse messaging of this biased event in the media coverage that resulted the following day.