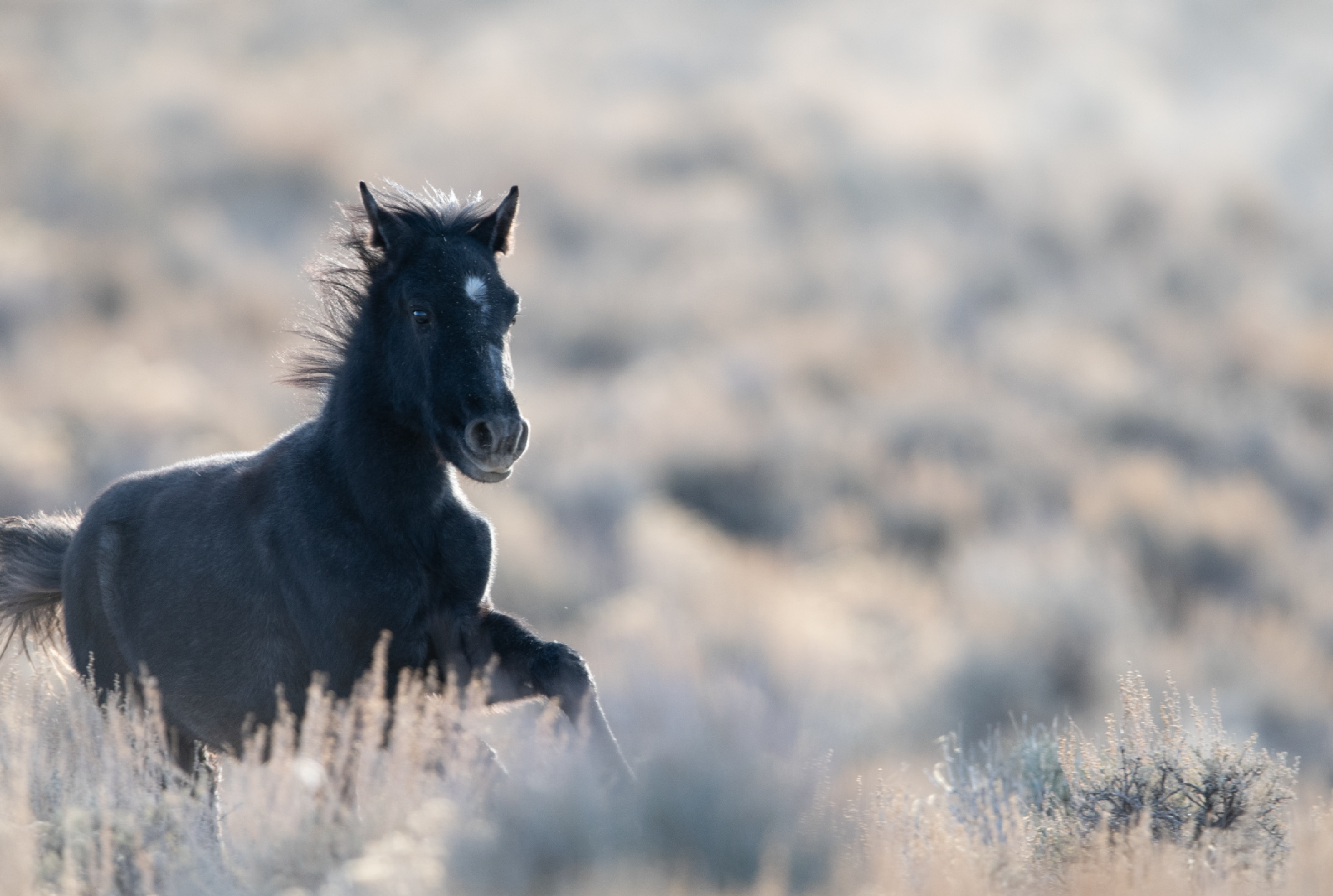 (November 11, 2019) This week the BLM began rounding up horses from the Seaman and White River Herd Areas (HAs) in Nevada. AWHC is particularly concerned about this operation both because the BLM plans to zero-out, or remove all, wild horses from these HAs and due to the fact that we have an active lawsuit in the same region that challenges a very similar roundup plan for the Caliente Complex. In addition, in both EAs and the Ely Resource Management Plan, the agency refused to even consider any reductions to domestic livestock grazing on these same public lands. This means that sheep and cattle will continue to graze in the Seaman and White River HAs as horses are permanently removed.

Last Thursday, we sent a letter to the BLM asking them to wait to implement any action under the Seaman/White River roundup EA until the court ruled in our Caliente Complex lawsuit. The BLM responded to our letter the next day and explained that they still plan to move forward with their plan. The BLM explained that they will need to return to these HAs several times before they can conclusively say that all the horses have been removed. Therefore, we will be watching this action closely as it develops and will update you with any news.

November 20, 2019
Zero mustangs were rounded up and removed today, and the operation has been suspended due to "unseasonably warm weather" in which horses are in the higher elevations. The BLM plans to return to the HA to remove the remainder of the horses until January.

294 wild horses have been removed and there have been 9 deaths.

November 17, 2019
43 wild horses were rounded up and removed, 20+-year-old great was euthanized due to body condition and "severe tooth loss".

November 16, 2019
7 mustangs were captured today. Our observer was the only member of the public on-site for the operation again today.  The trap site changed to the same spot from the first two days of the roundup - and we were located about a half-mile away.

Very few horses were captured today, operations decided to move the trap for tomorrow (11/17) to a site 12 miles South. There were so few horses left in open terrain that the contractors opted to temporarily relocate to a spot on the other side of a mountain miles away to the North just to chase a colt and a mare; these tries by horse-and-lasso were unsuccessful. Our field rep was not invited to view these attempts at the temporary location and remained at the initial observation spot. During this temporary absence of the crew, two other wild horses nonchalantly walked around a ridge within 200 feet of the initial observation spot and peacefully stared at our field rep (see close up photos of the white horses). 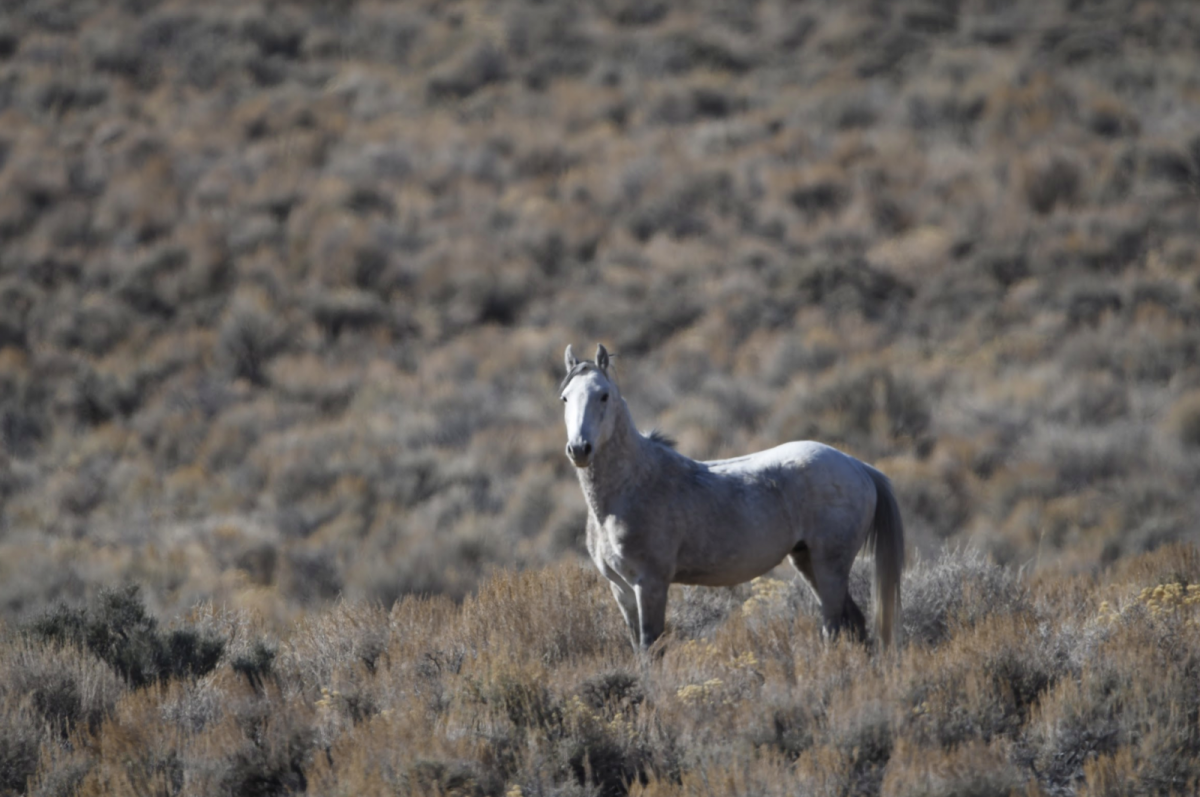 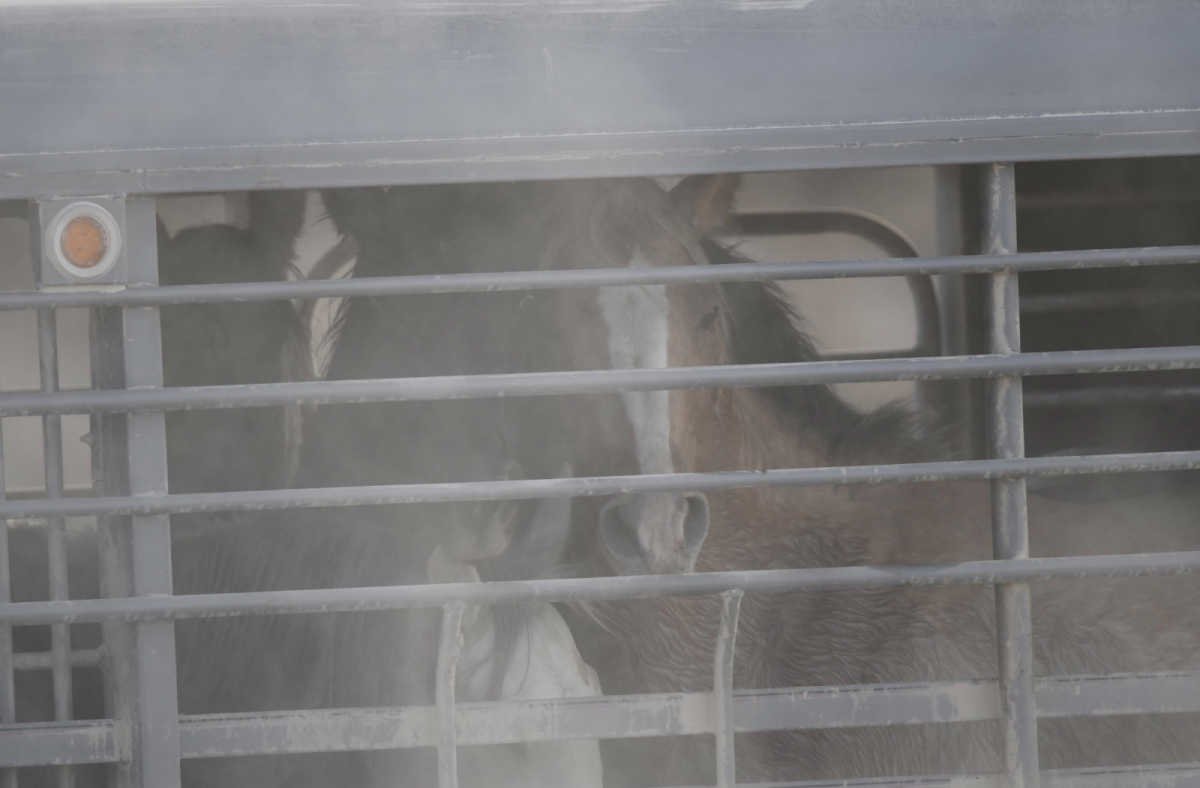 November 15, 2019
32 mustangs were rounded up and removed today, and two horses were euthanized: a 16-year-old mare who was captured the day before was euthanized because of body condition and having one eye, and a 6-year-old grey stallion with a "previously broken left rear leg". Today's roundup included two (mare and colt) that were roped off, requiring them to drove to pick them up.  2 loads from the prior days' were shipped out this morning, destined for the Ridgecrest holding corrals. 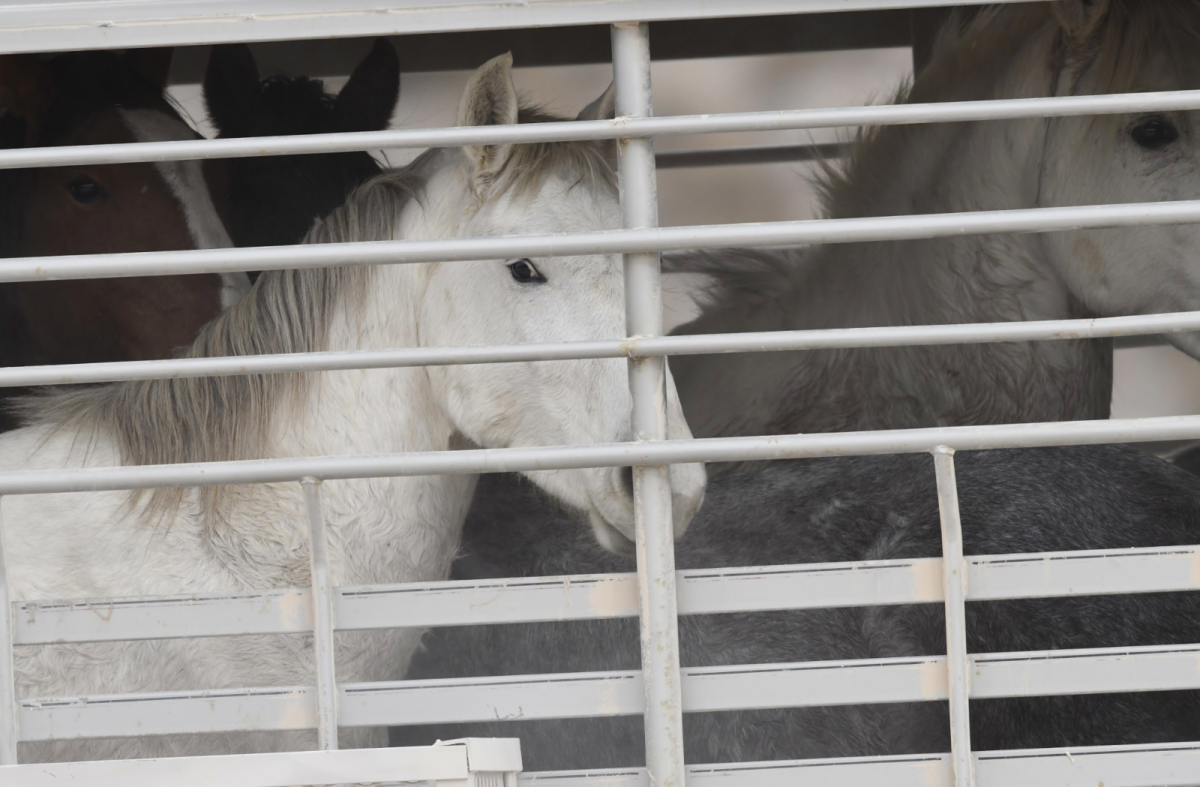 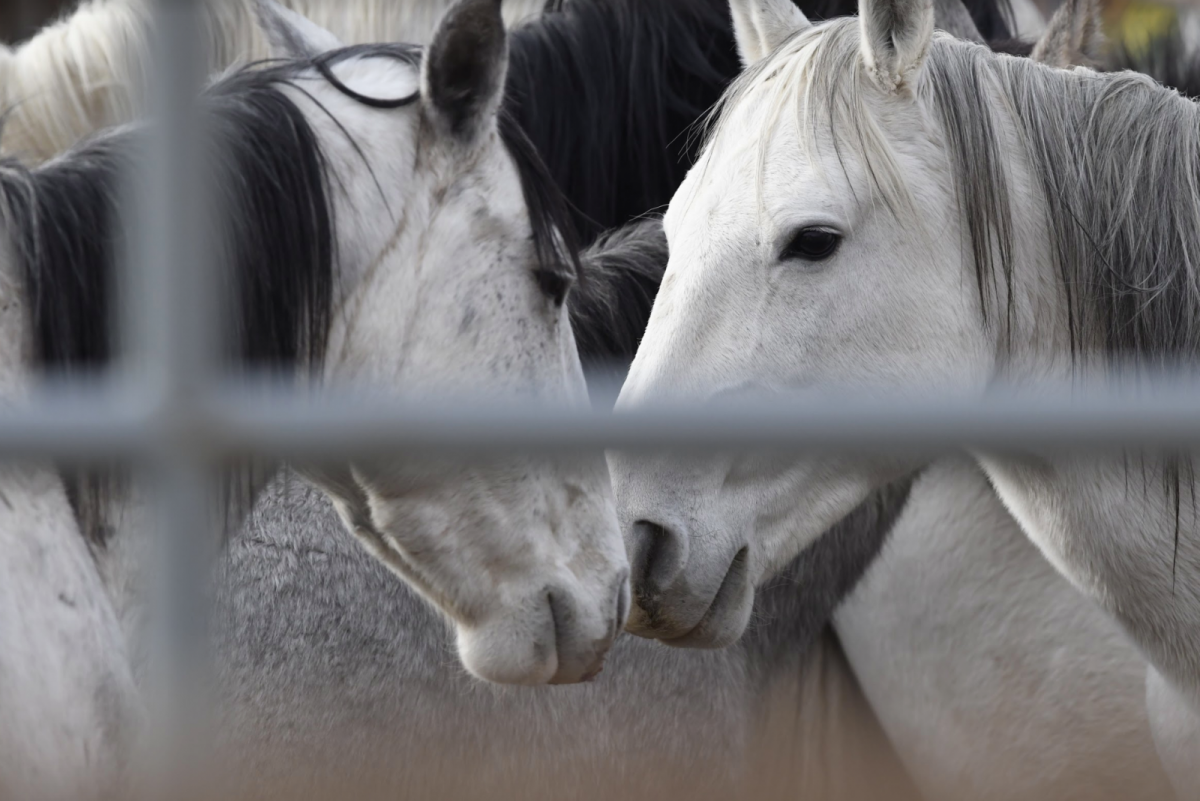 November 14, 2019
AWHCs field representative was the only member of the public in attendance at the removal today and we had a better view of the trapsite and corrals. 56 mustangs were captured and there were no deaths. This brings the total thus far to 172 captured (68 studs, 81 mares, 23 foals) and two deaths. 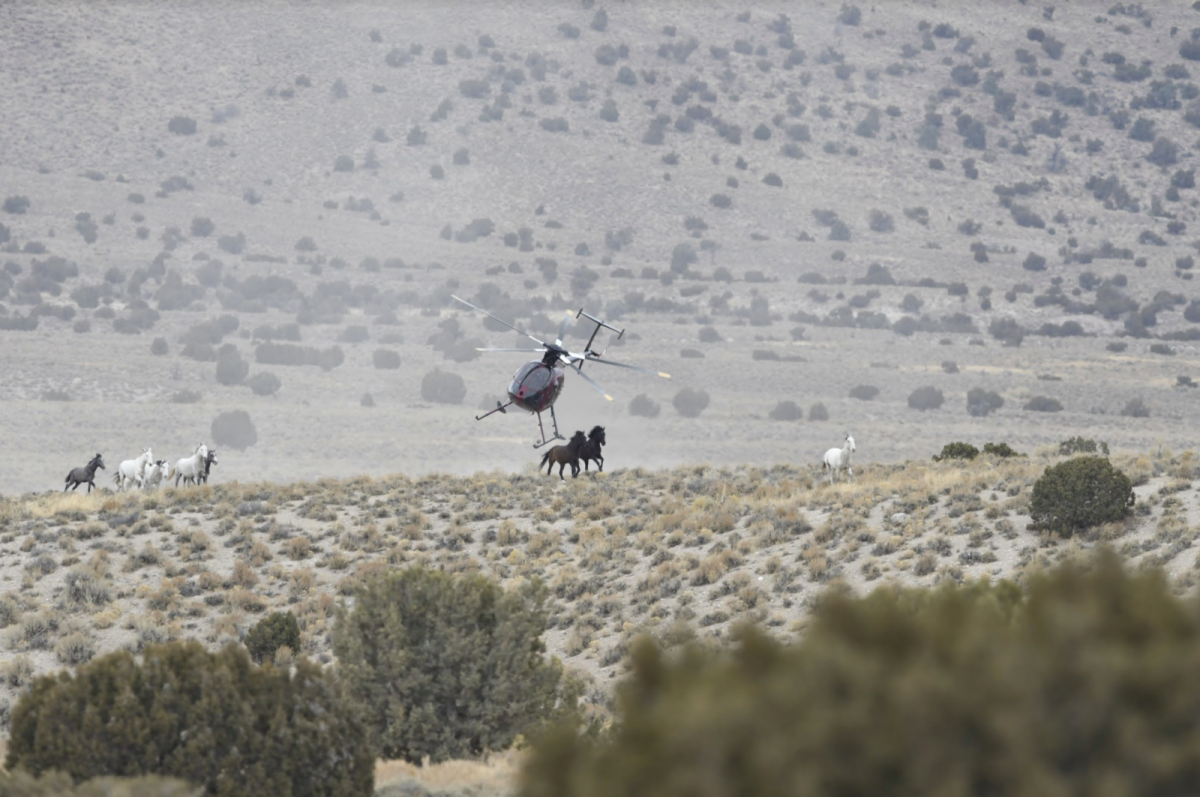 November 13, 2019
AWHC's field representative was the only member of the public in attendance at the removal today. 14 horses were captured, and one horse died. The BLM made the decision to unnecessarily euthanize a healthy, 4-year-old stallion who had an old injury to his eye that had been healed over.

The weather was unusually warm and the sudden heatwave prominent enough to warp the view of the mountains so much that the entire horizon looked like something out of science fiction. There was so much moisture that it took on the appearance of a reflective "lake" hovering in the air with mountain tops.

The trap site is about a half-mile from the viewing area which is not close enough to see what happens to the horses once inside the capture pen.

The day was called early by the contractors, as there are no more horses in the area in each direction to the horizon. 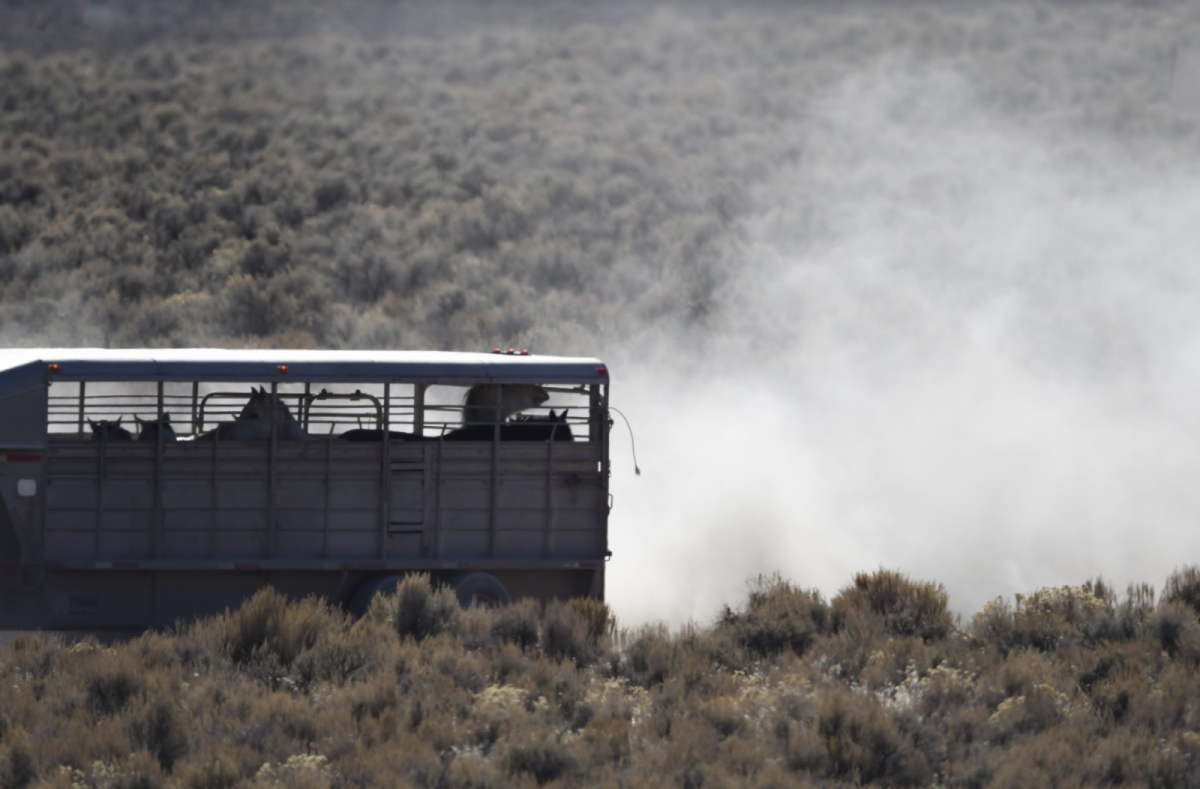 AWHC's field representative was the only member of the public onsite today for the first day of the White River/Seaman roundup and removal. The helicopter contractor for this roundup is Sampson Livestock Company.

102 Mustangs lost their freedom -- 40 stallions, 45 mares, 15 foals and there was 1 death after a stallion broke his neck shortly after entering the trapsite.

Within the span of two hours, two colts were separated from their herd and had to be brought in by contractors on horseback. Two hours later, while on a lunch break, one colt was seen wandering down from North and stopped by the observation vehicles. The foal called out a few times, and walked up the road to the trap. BLM radioed in and the contractors wrangled the foal. This is one of the detriments of roundups - contractors had not seen that a foal had been separated from its mother, and had it not wandered toward the pens, it would have been left alone in the wild without family for protection. 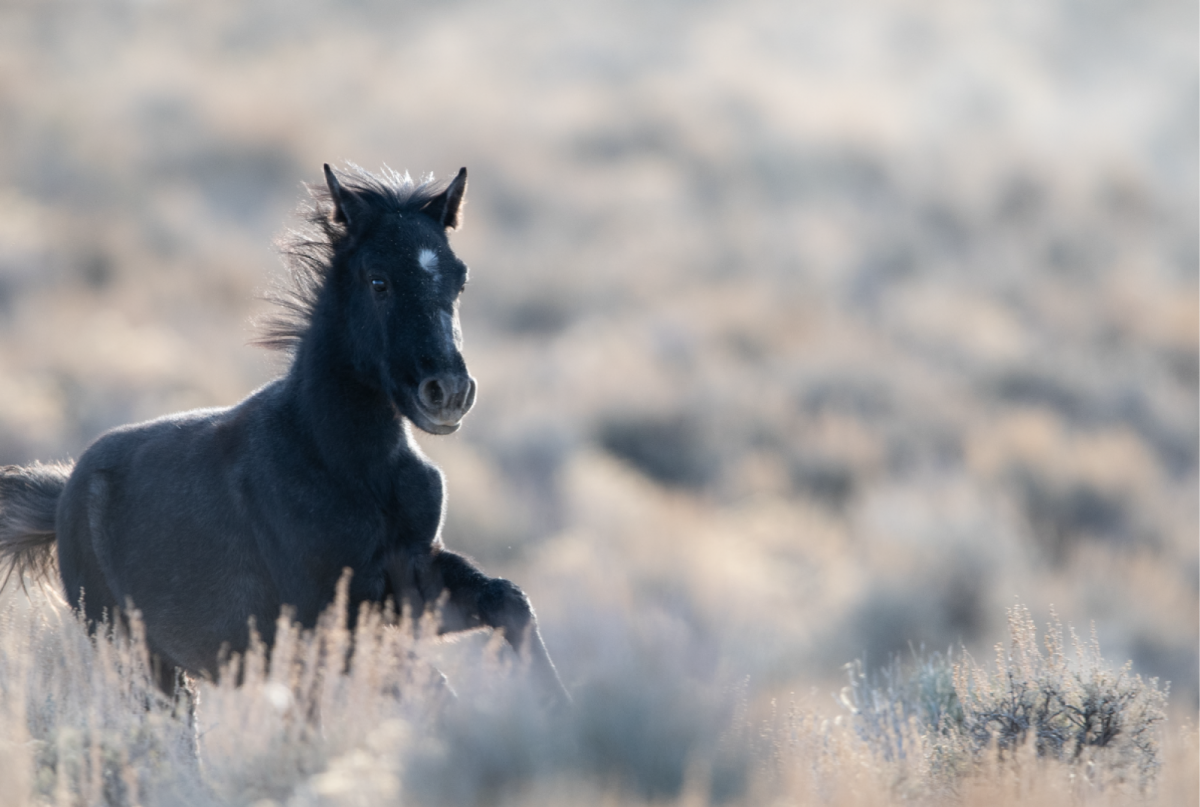 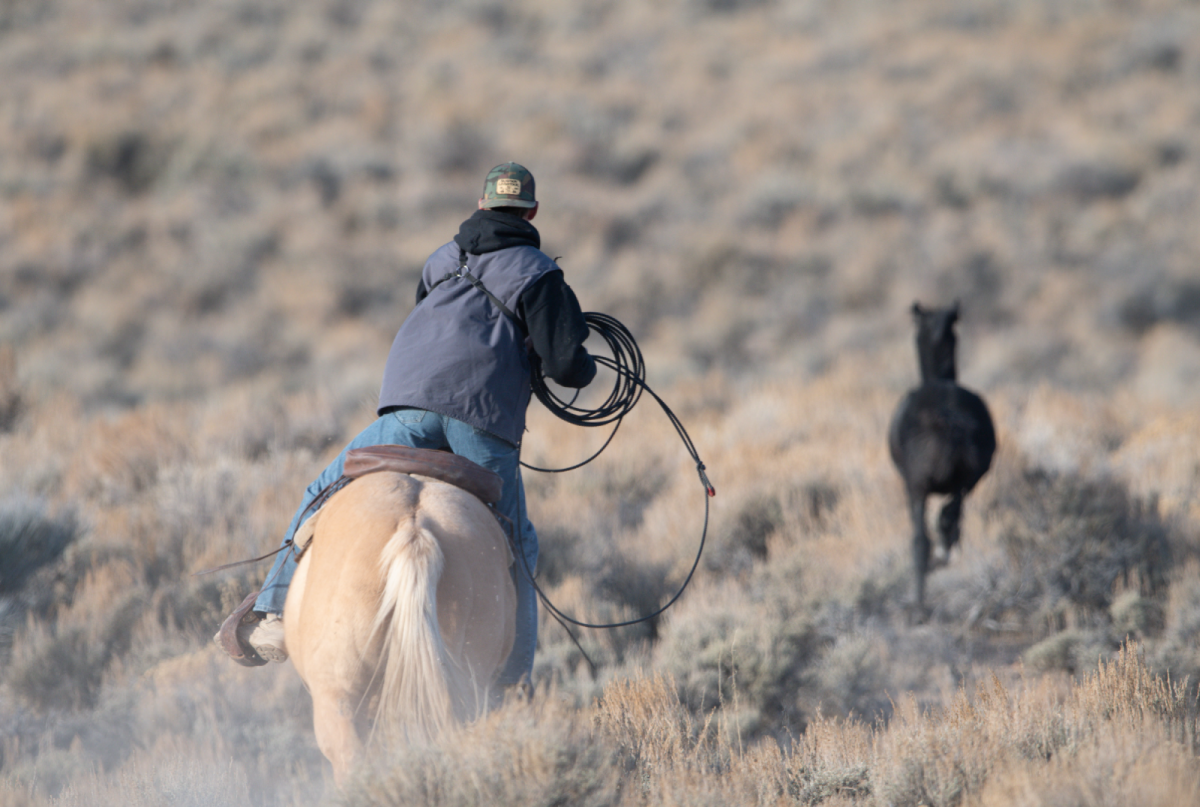 At one point in the day, one of the Judas horses (the contractors tamed, domestic horse which leads mustangs into the trap) decided to not cooperate and took the opportunity to run off during the colt chase, climbed a nearby mountain, walked over a few ridges and stayed up there the next few hours looking watch over us. Perhaps he was inspired to be wild and free.

According to BLM, 530 wild horses live in the area and the goal of this roundup is to captured 450 but would like to get them all.