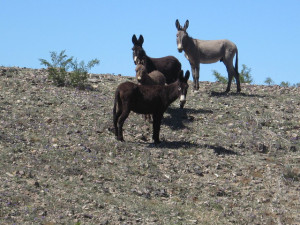 Over 40 Wild Burros Illegally Shot To Death In Mojave Desert

Over 40 Wild Burros Illegally Shot To Death In Mojave Desert

NEEDLES (CBSLA) – Authorities are searching for those responsible for illegally shooting and killing at least 40 wild burros over the past several months in the Mojave Desert region of San Bernardino County.
Since May, the carcasses of 42 wild burros with gunshot wounds have been found along the Interstate 15 corridor between the Mohave Desert community of Halloran Springs, east to the town of Primm on the California-Nevada border, according to the Bureau of Land Management.

The killed burros live in a region known as the Clark Mountain Herd Area which is managed by the BLM’s Needles Field Office.

Wild burros and horses are federally protected from being captured or killed under a law passed back in 1971.

The BLM has joined with several nonprofit groups, including the American Wild Horse Campaign, to offer an up to $18,500 reward for information leading to an arrest.

“Wild horses and burros are an iconic part of the American West, and part of our national heritage,” said BLM Deputy Director William Perry Pendley in a statement. “We will pursue every lead until we’ve arrested and prosecuted those responsible for these cruel, savage deaths, and we welcome the public’s help to bring the perpetrator or perpetrators to justice.”