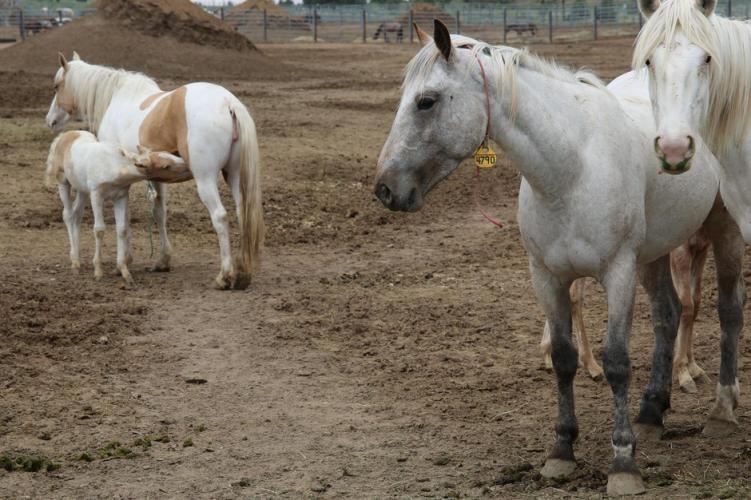 Wild horses walk a fine line between icon and unwanted. The Bureau of Land Management is eyeing an Oregon experiment to spay wild mares as a potential model for the West.

Among the many horses, fence panels and mounds of manure at a Bureau of Land Management wild horse corral, a nursing colt ducked between his mother’s legs.

The mare swung around him to watch a tractor lift hay bales the size of cars. Like more than 11,000 wild horses last year, she was removed from public rangeland. She gave birth at this BLM corral in Eastern Oregon, and the collar around her neck means it could be her last foal: She’d been tagged to undergo surgical sterilization.

The procedure hasn’t been widely performed on wild horses before, but after years of opposition, the BLM hopes to operate on test mares as soon as next month.

The National Academy of Sciences looked at the practice and issued a report in 2013, saying it didn’t recommend spay surgery due to risks of infection and the difficulty of providing follow-up care. When the BLM published its plan to move ahead with ovariectomy via colpotomy, animal rights groups sued. Again it triggered a strong reaction, with more than 11,300 public comments pouring into the agency, according to a BLM spokeswoman.

The BLM has long been under pressure to bring down horse herd numbers across 10 Western states without resorting to slaughter. Relatively few of the horses it rounds up are adopted or sold — just a few thousand last year, compared to the 48,000 wild horses kept in corrals or private facilities and leased pastures. The agency spends $50 million a year to run that holding system. The horses left on public rangeland share it with millions of privately owned cattle, which are authorized to graze under BLM permits.

The BLM claims that wild horse herds double every four years without intervention. Federal law calls the horses “living symbols of the historic and pioneer spirit of the West,” but it limits where they can roam to areas identified 50 years ago. Water sources in those areas have run dry before. Sharp said, in Eastern Oregon, the BLM has trucked thousands of gallons a day to keep wild horses from dying or trespassing onto private land in search of water.

“The general public does not stand to see starving and dying horses on the range,” Sharp said. “Unfortunately, I think that will be the impetus for major change in this program.”

The BLM’s wild horse and burro program is eyeing the Oregon spay experiment as a model for the West. Stallions have been castrated before, but Sharp said that’s not effective for long-term population control, since one stud can get many mares pregnant.

The spay procedure is increasingly outdated among domestic horse veterinarians, said Dr. Regina Turner, head of the Equine Reproduction & Behavior Service at the University of Pennsylvania. She’s not affiliated with the BLM or any advocacy groups commenting on the spay study. She last performed ovariectomy via colpotomy — the kind of procedure the BLM is planning — in the 1990s.

“It can be done humanely, with minimal stress to the mare, if it’s done with proper pain control, and done efficiently and quickly by someone who’s experienced at the procedure,” Turner said. “But, I’ll be honest, it would not be my first choice,” she added.

The procedure involves a surgeon making an incision and using a chain to crush a mare’s ovaries internally by feel, without help from the tiny cameras Turner deploys in her practice. Spaying isn’t used as a birth control method for domestic horses, and is more often performed to alter behavior “usually if there is an animal the owners don’t put a lot of value on,” Turner said.

At her clinic, several spayed mares are used as “stimulus animals” to collect semen from stallions.

“If you have a mare that has no ovaries, she never has high progesterone, so she’s always receptive to the stallion, pretty much 24/7, 365,” Turner said.

Mares typically won’t breed most of the year. One of the concerns raised by opponents of spaying wild horses is how a major change to their reproductive organs could alter how the horses interact with each other.

“They’re not livestock. They’re a specially protected species. They’re the only other animal protected under federal law besides the bald eagle,” said Suzanne Roy of the American Wild Horse Campaign, a group that has sued to block the spay study.

She called the surgery “a completely inappropriate procedure” and “invasive and inhumane,” but she agrees the herds need to be managed. Roy supports a birth control vaccine called PZP — a shot that costs more than permanent surgery. It also requires getting close enough to dart mares with annual boosters. Because of that, the BLM has said PZP is not a viable fertility-control option for most wild horse herds.

Supporting the spay study is a group called Protect the Harvest, which spokesman David Duquette said was formed to oppose animal rights groups.

“[Wild horses] are not indigenous. They’re wild only because they were turned loose mainly when the mechanical era, when tractors started coming into play,” Duquette said.

Through its political action committee, Protect the Harvest spends money to oppose farm regulations across the country and legislation to prevent cruelty to dogs in puppy mills. Founder Forrest Lucas is an oil executive and hobby rancher with ties to the Trump administration.

Duquette said the organization is “all about property rights” and that it played a “big role” in persuading President Trump to pardon Dwight and Steven Hammond, two Eastern Oregon ranchers convicted of arson. In 2016, their names were rallying cries for organizers of an armed occupation at the Malheur National Wildlife Refuge, a protected area not far from the BLM’s wild horse corral in Hines.

Lately, Protect the Harvest has bought wild mares from the BLM in order to spay them. The horses were trained and sold at publicity events to promote the BLM’s spay study. If that study moves ahead, the wild mares already tagged for surgery will be turned back out and monitored from afar.