Pulling Back the Curtain on the "Path Forward" Plan, Part II: The Fertility Control Deception

Pulling Back the Curtain on the "Path Forward" Plan, Part II: The Fertility Control Deception

(March 24, 2020) Since the release of the "Path Forward", (brought to you by the Humane Society of the United States, the ASPCA, Wild horse sanctuary, Return to Freedom, the National Cattlemen's Beef Association, etc.) its supporters have consistently maintained that safe and humane fertility control is the core of the proposal and have downplayed the plan’s key component -- removal of up to 130,000 horses and burros from the public lands over the next 10 years.

In reality, the Path Forward is pursuing the same failed strategy that the Bureau of Land Management (BLM) has employed in the last 40 years – massive roundup and removals with minimum fertility control. While the proposal is short in detail, it makes clear that the “business as usual” roundups and removals is the preferred strategy and that sterilization of both mares and stallions is on the table.

The Path Forward: More of the Same - Increased Roundups and Stockpiling.

Despite this, proponents convinced Congress to increase the BLM’s Wild Horse and Burro Program budget by a whopping 25% — $21 million — last year, based on their representation that the plan provided a “path forward” for a radical shift away from roundups and toward reliance on fertility control to manage the nation’s wild herds. According to New York Times and Pulitzer Prize-winning reporter David Phillips, author of Wild Horse Country: The History, Myth, and Future of the Mustang, this is the third time in the program’s history that Congress has decided to increase the program’s budget based on promises of reform. Twice before, the agency has used additional funding to round up as many horses as possible, deepening the crisis with each accelerated roundup push.

Is the Path Forward really a “fertility control” plan as its proponents claim? Let’s look at the numbers. The 10-year Path Forward plan asserts, based on unpublished population models, that 15,000-20,000 horses should be rounded up and removed each year for the first three years and then 5,000-10,000 each year for the next seven years in order to “to get the population close to the BLM’s desired AML [Appropriate Management Level] of just 26,690” wild horses and burros. 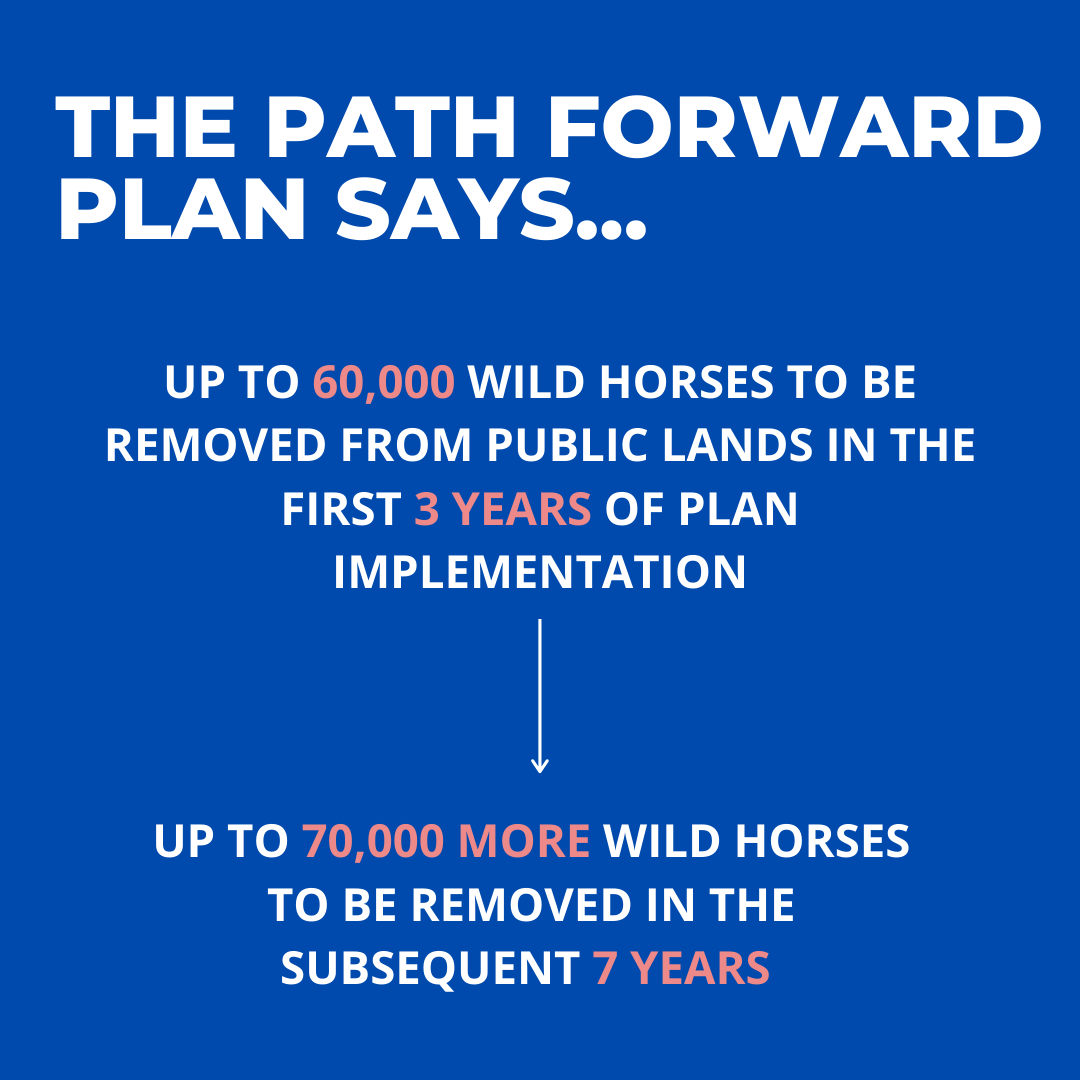 To justify these huge numbers, the Path Forward states, removals “need to be higher initially to allow fertility control to catch up with the population” because implementing “fertility control alone or alongside current average removal numbers would not achieve population balance and control.” That statement by itself reveals the prevalent role that roundup and removals will play compared to fertility control in this proposal. It also emphasizes the plan’s core goal: achieving the AML, despite the National Academy of Science (NAS) 2013 conclusion that these population limits are not supported by science or transparent to the public.

On top of the massive roundups and removals, the Path Forward calls for “reasonable” sex ratio skewing, which it defines as a 70% to 30% stallion to mare ratio. It’s hard to imagine how any humane organization could endorse this extreme manipulation of wild horse and burro populations. Even the BLM admits that sex ratio skewing will cause social disruption and increased aggression among herds as a large number of stallions fight for a small number of mares. Clearly, this will have profound impacts on the welfare and natural behaviors of wild herds.

The Path Forward acknowledges the BLM’s abysmal record on implementing safe, cost-effective, and humane fertility control: “Between 2012 and 2018, the BLM treated fewer than 4,353 horses with fertility control, and released many gathered horses back onto the range without fertility control treatment.” At the same time, it gives the BLM a complete pass by stating that the agency has a “limited range of tools at its disposal” because of “logistics and controversy.” This contradicts the NAS’ 2013 finding that “Tools already exist for BLM to address many challenges.”

Further, while calling for an annual roundup of up to 20,000 horses, the Path Forward is vague about the actual number of horses who will be treated with fertility control and when the treatments will begin. In fact, according to Bruce Rittenhouse, Acting Wild Horse and Burro Division Chief, speaking at the BLM Advisory Board Meeting in October, the agency needs to aggressively remove wild horses down to AML and hold off on implementing fertility control while HMAs are over AML because it is not cost-effective. Other BLM officials have reiterated this position.

The BLM has made clear that it defines “fertility control” to include permanent sterilization, and the agency currently is placing an emphasis on surgical removal of wild mares’ ovaries and castration of free-roaming stallions as its preferred population control methods.

When it commissioned the 2013 report, the BLM asked the NAS to answer several questions, including whether the use of surgical sterilization methods — ovariectomy in mares and castration of stallions — was appropriate as a wild horse and burro management tool. The NAS concluded that they were not, stating,

Nothing in the Path Forward plan discourages these dangerous and controversial methods that the NAS warned against. In fact, the ASPCA, a major plan proponent, has acknowledged that ovariectomy and castration could be part of the plan.

Rep. Chris Stewart, a vocal advocate in favor of the plan, said on the House floor that the Congressional funding would be used for mass sterilization.

Utah BLM Wild Horse and Burro Lead Gus Warr has stated clearly that the Path Forward Plan will help BLM implement surgical sterilization and facilitate the creation of non-reproducing or partial non-reproducing herds on the range.

Given the extreme population reductions envisioned, the combined use of sex ratio skewing and “fertility control,” particularly sterilization, on 90% of the horses left on the range could spell the end for America’s wild free-roaming mustang and burro herds.

The last time Congress threw money at the wild horse and burro program was during the previous administration, which promised “fundamental reforms” including making science-based management decisions based on the recommendations of the NAS, reducing removals, and expanding the use of fertility control to maintain herd levels.

The BLM, however, failed to deliver on promised fertility control, focusing instead on roundups, removals, and warehousing of horses and burros and pushing the program to the verge of fiscal collapse — while also illegally selling nearly 2,000 wild horses for slaughter.

Albert Einstein defined insanity as doing the same thing over and over again but expecting different results. This the third time that Congress has thrown money at the broken wild horse and burro program. Each time before, the BLM used the funding but failed to deliver on promises of reform. Given its call for accelerated and unprecedented roundups and removals, there’s no reason to expect the Path Forward will achieve anything different this time. Instead, it could spell the end for America’s wild free-roaming horses and burros.

Up next: Part III: Perpetuating the Myth of “Overpopulation”

Read Part I: The Science Fallacy