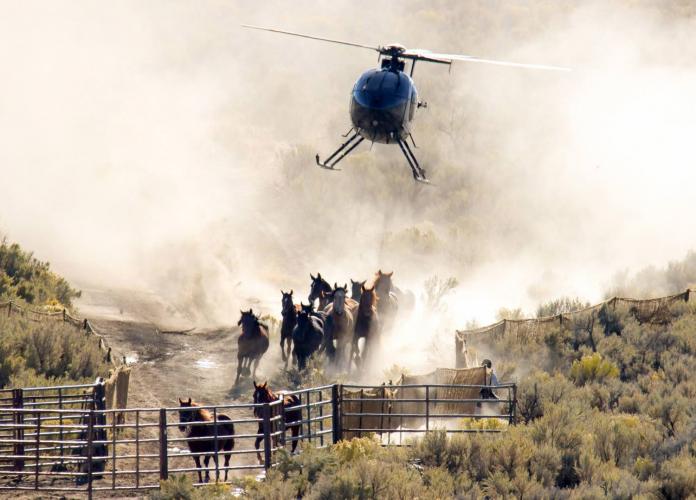 Q: What happened last week in the Senate?

A: The Senate Appropriations Committee approved $35 million in additional funding to the BLM Wild Horse and Burro Program for implementation of a mass mustang roundup and warehousing plan promoted by the livestock industry, along with the HSUS, ASPCA and Return to Freedom.

On September 26, 2019, the Senate Appropriations Committee passed the Interior, Environment and Related Agencies Fiscal Year 2020 Appropriations bill. The bill includes a $53 million increase to the Bureau of Land Management’s (BLM’s), overall budget.  In report language accompanying the bill, the Senate directs that $35 million of that increase be directed to the agency’s wild horse and burro program. The nearly  40% increase to the BLM’s Wild Horse and Burro Program is directed toward accelerated roundups accompanied by “population growth suppression” on wild horses that remain on the range.

The funding increase was requested and intensively lobbied by the Humane Society of the U.S. (HSUS), the ASPCA and Return to Freedom, as part of their compromise with the livestock industry on wild horse management issues. That compromise is outlined in the a plan dubbed the  “Path Forward For Management for BLM’s Wild Horses and Burros," which is also endorsed by the National Cattlemen’s Beef Association, the American Farm Bureau Federation and other commercial livestock interests that seek to maximize subsidized cattle and sheep grazing on public lands.

The Senate’s $35 million increase is a significant increase over the $6 million appropriated in the House version of the bill, which passed the full House in June.

A: There’s a long process ahead before this becomes law - if it ever does.

The next step for the Senate Interior Appropriations bill is a vote on the floor of the full Senate. Following that, the bill would go to a conference committee, where designated members of both the House and the Senate iron out differences between the two bills and negotiate the contents of the final spending bill. This process may never happen, however, since Congress may choose to fund the government in FY20 by passing a Continuing Resolution (CR) instead of a spending bill. A CR would extend FY 2019 spending levels and restrictions  into the new fiscal year, which begins October 1, 2019.

Even if the bill becomes law, the BLM will have many hurdles to cross before implementing accelerated roundups and inhumane management tools like surgical sterilization.

Q: What is the “Path Forward”?

A: It’s a so-called compromise that would reduce wild horse and burro populations by 70% over the next ten years through large-scale roundups.

The “Path Forward” plan is an inside the beltway deal cut by the Humane Society of the United States, the ASPCA, Return to Freedom, the American Mustang Foundation- a new organization formed by lobbyists with connections to Western politicians, and livestock industry lobbying groups for the management of wild horses and burros on BLM land.

The plan was developed without input from boots-on-the-ground individuals and groups actively engaged in managing wild horses on the range and is opposed by the majority of organizations working to protect wild horses and burros in the West.

A. The plan has these components.

Q. What’s Wrong with the Plan?

A. The plan accepts the livestock industry’s premise that wild horse populations are wildly overpopulating the range. It omits any consideration of the vastly larger numbers of livestock in mustang habitat and on public lands in general.

The plan lacks any consideration of the following key facts:

Q: The HSUS, ASPCA and RTF say it’s a non-lethal plan is that true?

A: No. The long-term risk of slaughter is actually increased by this plan. 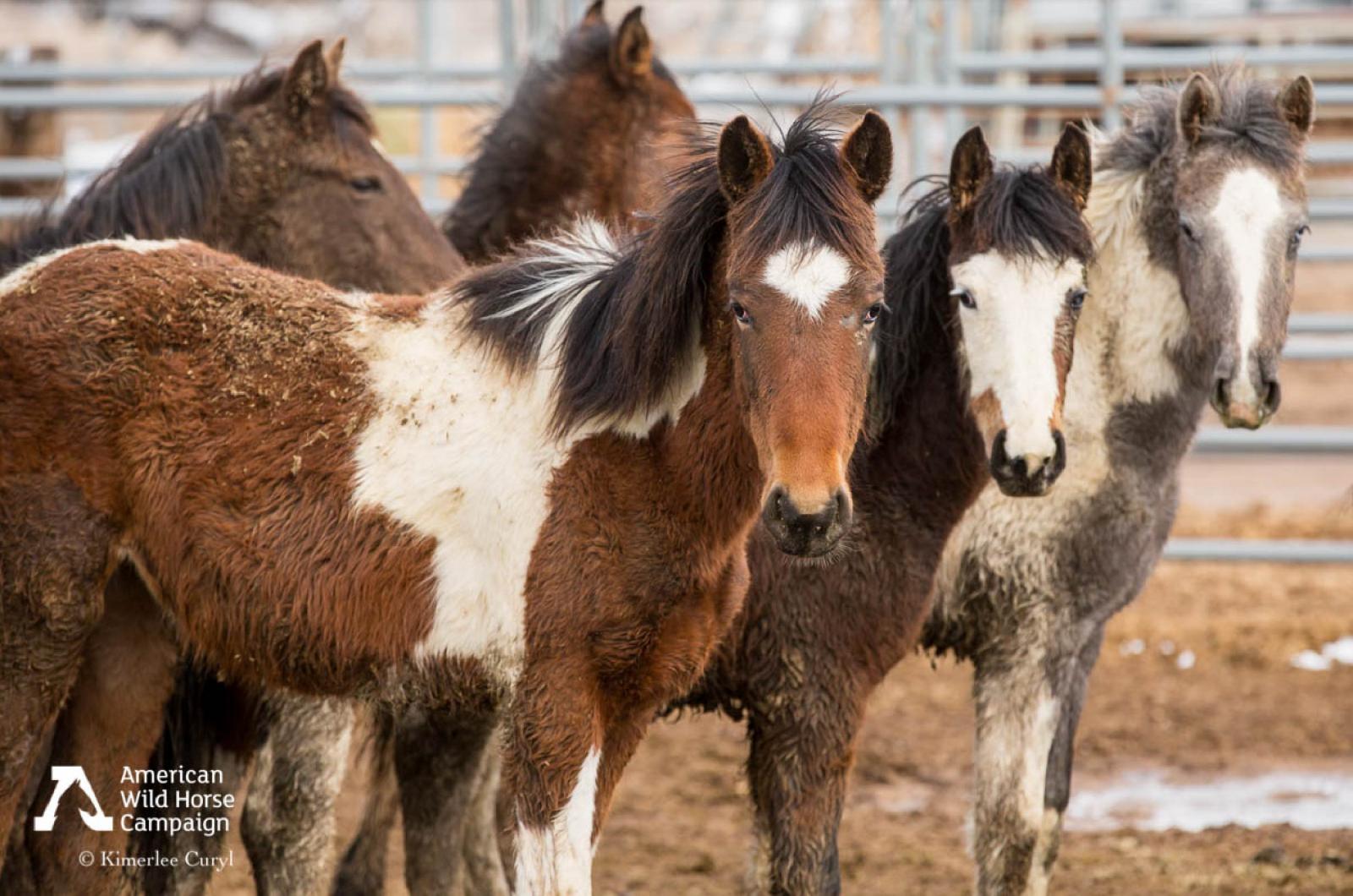 The bill language provides only a one year prohibition on slaughter. However, as the plan is implemented and holding pens and pastures swell with tens of thousands more horses and burros, increased pressure will be placed on an already stressed system of warehousing horses and burros without any consideration of the future. Congress will tire of paying a bill for the care, as the price tag grows toward  $1 billion over the 10 years of the plan.

Even if the Congress does not legalize slaughter outright, the sheer number of horses and burros in holding will undoubtedly lead the agency to take steps to reduce numbers through policies that make it easier to move horses out of holding. Expect further relaxing of sales and adoption policies and pursuit of an international policy that would allow for the shipments of horses and burros out of the country to destinations where their welfare will be impossible to ensure. These measures will make it easier for wild horses and burros to slip through the cracks into the slaughter pipeline, and for situations like the agency’s 2012 illegal sale of over 1,700 wild horses to a known kill buyer to recur.

Q: They also say that it’s a fertility control plan, is that true?

A: Quite the opposite. Fertility control is not required as part of the plan.

While those groups clearly hope that BLM will utilize humane fertility control, there is nothing to guarantee that outcome. In fact, the BLM still maintains that PZP fertility control – the best and most humane method available – is useful in only limited situations and the agency continues to press for “spaying” mares (via a dangerous surgery to remove their ovaries).

From the language being promoted:

"These removals will be coupled with mandatory on-range population growth suppression programs which will ensure that all appropriate wild horses and burros are treated. The agency should work with interested stakeholders to further develop and implement appropriate removal, fertility control, and relocation plans."

The language does not require the use of  PZP. The vague nature of the plan leaves the door open for the agency to pursue other methods. Keep in mind that words like humane are not defined and therefore the agency is able to determine whether an option is humane and proven based on its own criteria.

Q: Why would those groups support the plan?

A: Different endorsers of the plan have different motivations.

For the livestock industry, the plan maximizes profits as the large numbers of horses removed from the range are replaced by cattle and sheep. The American Mustang Foundation stands to make millions through holding contracts for the warehousing of up to 50,000 wild horses.

For the HSUS/ASPCA and RTF, the situation is more complex. At a basic level, striking this “compromise” has allowed these groups to curry favor with House and Senate appropriators by giving them a “plan” to “solve” a contentious issue and appease the powerful livestock lobby while appearing to help wild horses. The ASPCA and HSUS are not wild horse protection organizations and they lobby for a range of issues that affect both domestic and wild animals. It’s not beyond the realm of possibility that these groups “horse traded” our wild horses for appropriators’ support for other animal issues they work on.

The groups say that they have developed models for managing wild horses with  PZP fertility control that show mustang populations can only be managed at very low numbers. However, these models have never been published or peer-reviewed, or even released publicly. And as stated above, other solutions have been left off the table by these groups for whom appeasement of the livestock industry seems to be a top priority.

Q: What are our next steps?

A: Now that the lines have been drawn, we will join with like-minded organizations in continuing to fight to keep America’s wild horses and burros wild and free on our public lands.

We’ll continue to carefully review every environmental assessment that the BLM issues related to wild horse and burro management to make sure that protections are included in accordance with the Wild Horse Act, and that the agency does their due diligence under the National Environmental Policy Act for each action. When the agency falls short, we will be there to challenge them. Our legal team has already established important legal precedent establishing that the BLM is not required to conduct roundups when populations exceed the AML, and that the agency has discretion to manage herds in a variety of ways that do not involve removal. AWHC and our coalition partners The Cloud Foundation and the Animal Welfare Institute have twice gone to court to stop the BLM from proceeding with its plan to “spay” mares with a cruel and risky surgical method.   If the plan is funded, we’ll need to beef up our litigation program to meet the new challenges ahead.

In the coming weeks, we’ll be working with open-minded legislators to expose the flaws in the “Path Forward” plan. We’ll also be letting Congress know where Americans stand on the protection of wild horses and burros on our public lands. And, we’ll be working in Nevada in a stakeholder process led by Sen. Masto to develop a plan to manage wild horses in that state where over half of America’s remaining mustangs live.  Working with our local coalition partners, our voice will be essential in this process. Our strong advocacy for the preservation of wild horses and burros on our public lands provides a critical counterbalance to the HSUS/ASPCA/RTF ten year agenda of mass roundups and radical population reductions.

3.  Fight in the field to show that humane management works.

We’ll continue to implement and expand PZP programs to show that humane management, including population reduction when necessary, is possible.

4.     Hold the HSUS/ASPCA and Return to Freedom Accountable

These groups have made promises to the horses, outside of the text of their plan. They promise that wild horses will not be slaughtered and that ovariectomies will not be used, even as their fellow signatories to the plan say they will. They assure the public that the BLM will use PZP fertility control instead of more draconian “population growth suppression” even as the BLM continues to maintain that PZP is useful only in limited situations (oftentimes agency officials say that it simply doesn’t work). We will closely monitor what happens, and hold these groups accountable if the funding they lobbied for is used solely for roundups and/or on inhumane "population growth suppression" methods.

More info on the plan: