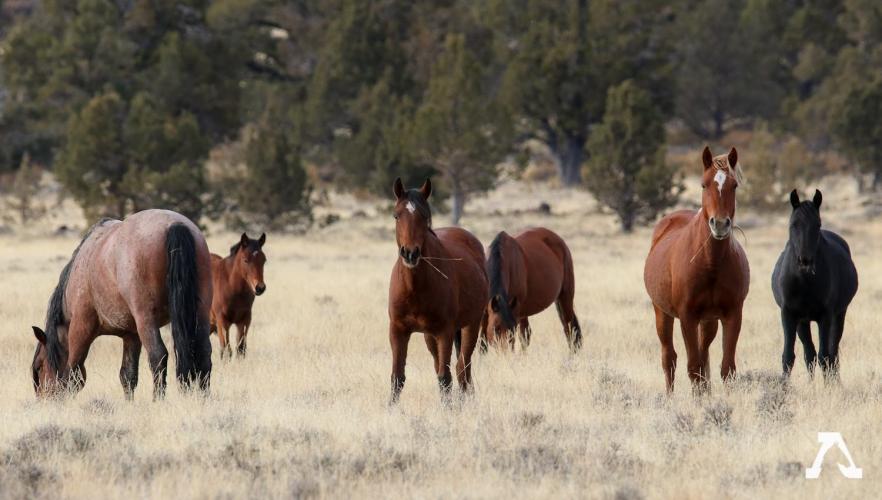 Helicopters will descend on the Modoc National Forest to round up and remove approximately 30 percent of the state’s largest and most significant wild horse population from the Devil’s Garden Wild Horse Territory outside of Alturas.  The roundup is happening one month after Modoc Forest officials released a census estimating that far fewer mustangs live in the forest than has been previously claimed.

“The Devil’s Garden wild horses are protected under federal law and we call on the Forest Service to unequivocally reject slaughter as an option for disposing of captured mustangs,” said Suzanne Roy, Executive Director of the American Wild Horse Campaign. “Further, we urge the Forest Service to change its approach to wild horse management by concentrating on humane fertility control instead of large-scale roundups that traumatize wild horses and waste taxpayer funds.”

The latest roundup follows the controversial removal of 932 horses last fall, after which the agency announced its intent to the captured animals without limitation on slaughter. The plan provoked litigation and widespread opposition from the public and California political leaders including U.S. Senator Dianne Feinstein, Attorney General Xavier Becerra, U.S. Rep. Ted Lieu and 26 other members of the California Congressional delegation, and Assemblyman Todd Gloria and 27 of his California Legislative colleagues. In October, the American Wild Horse Campaign (AWHC), joined by the Animal Legal Defense Fund, filed a lawsuit to block the Forest Service from proceeding with its plan.

Under pressure from local ranching interests that seek access to cheap grazing on public lands in the Modoc, the Forest Service intends to reduce the wild horse population to between 206-402 in the Forest while authorizing over 3,700 privately-owned cow/calf pairs and 2,900 privately-owned sheep to graze for six months a year on the public lands there. Livestock operators have always claimed that there are as many as 4,500 wild horses living in the Forest but the recently released census by the United States Geological Survey released last month estimates that far fewer mustangs actually reside there. The AWHC charged that the Forest Service and livestock interest groups have been falsely inflating horse numbers with the intent of securing tax dollars for roundups to remove most of the wild horses from the Modoc Forest.

Last year, AWHC offered to implement and fund a pilot fertility control project to humanely reduce population growth rates in the herd, as recommended by the National Academy of Sciences. However, the Forest Service rejected the offer.

More information on the Devil’s Garden wild horse situation can be found here.