The BLM National Wild Horse Advisory Board met last week for the first time since making its outrageous recommendation last year to kill and sell for slaughter wild horses and burros in holding facilities. At last week’s meeting, the stacked Advisory Board doubled down on its lethal recommendation, adding to its list:

·         Phasing out long-term holding pastures over three years and applying that money to on-range management and adoptions, a move that would result in the destruction of the 32,146 horses currently residing in those pastures.

·         Immediately (within the next three years) achieving AML by removing all excess animals and enlisting the assistance of state and local governments to do so. This would result in the mass killing or slaughter of as many as 46,000 federally protected wild horses and burros whom the BLM considers to be “excess.”

From their comments, many Board members appear to believe that “on-range management” only refers to range projects that increase livestock grazing rather than to fertility control and other measures to manage wild horses on the range.  That’s why the Board also recommended that only $3 million of the more than $20 million saved by “phasing out long-term holding” be applied to fertility control. The rest would be spent to roundup and remove tens of thousands of wild horses and burros from their homes on the range as well as range “restoration” projects (reseeding, etc.) to make more land available for ranchers to graze their cattle and sheep.

The Board also voted to increase funds to promote adoptions and sales, including internationally. A proposal by Russia to purchase a large number of horses as prey for a big cat re-wildling project was also discussed in favorable terms.

The other significant recommendation coming out of the Board was to hold the next meeting in Washington, DC between January and March of 2018 in order to “sell their plan” to Congress and the Interior Department.

Last year, the BLM publicly stated that it would not accept the Advisory Board’s recommendation to destroy and sell for slaughter wild horses in holding. At this year’s meeting, BLM Assistant Director Kristin Ball informed the Board that the agency would not be commenting on that lethal recommendation. Rather, she said that the BLM wanted to focus this meeting on getting ideas for the plan that the BLM must submit to Congress (pursuant to 2017 appropriations language) to manage wild horses and burros in a humane and sustainable manner.

Ball and other agency members skirted the full implications of the new Administration’s change in policy – as revealed in the Fiscal Year 2018 budget request to Congress – which proposes to save $10 million by destroying healthy wild horses and burros and selling these federally-protected animals “without limitation,” which means for slaughter.

Meeting participants were treated to a reprise of the Slaughter Summit, which took place in Salt Lake City in August, as several presenters discussed the negative impacts of wild horses (which they called “feral”) on the environment without ever acknowledging the massive damage caused by livestock, which graze on six times more BLM land than do wild horses.

The entire meeting had an Allison-in-Wonderland-like vibe as the stacked Board continued the march toward mustang slaughter while the BLM just wrung its hands and went along for the ride.

Our coalition partner Ginger Kathrens, Executive Director of The Cloud Foundation, deserves our gratitude and respect for persevering as the lone voice of the American people, who overwhelmingly oppose killing and slaughter of wild horses and burros and support protection of these iconic animals on our public land.

The addition of Jim French to the Advisory Board to represent natural resource management is an interesting development. Although he supported the pro-killing, “get to AML” position of the Board, he did appear to be more supportive of humane management options and more open to collaboration with community partners.

HIGHLIGHTS OF THE MEETING:

The stars of the show, from the perspective of wild horses, were the Colorado wild horse advocates who made a formal presentation on their work to the Board.

In the eight years we have been covering these meetings, theirs was the first pro-wild horse, constructive presentation we can recall being made before the Advisory Board.

Mustang advocate TJ Holmes made an inspired presentation about her work implementing a PZP fertility control program for the Spring Creek Basin wild horses. Her successful program has eliminated helicopter roundups in the Basin and kept the population in check without removals. When Board members tried to marginalize her program in terms of its applicability to larger BLM herds, Holmes replied simply, “Want to, can do. This is the West.” Holmes manages the Serengeti Foundation American Wild Horse Sanctuary adjacent to the Spring Creek Basin Herd Management Area (HMA).

Stella Trueblood of the Sand Wash Advocate Team (SWAT) and Michelle Sander of the Great Escape Mustang Sanctuary (GEMS) followed Holmes to talk about their excellent work to steward the incredible wild horses of the Sand Wash Basin HMA. SWAT focuses on darting the mares with the PZP fertility control vaccine, while GEMS focuses on training, placement and sanctuary for any horses removed from that HMA.  These women are blazing the trail for comprehensive, humane and productive solutions for our cherished mustangs, and they really deserve our support!

The standout in this category was the presentation of Utah State University (USU) professor Terry Messner, who organized the Slaughter Summit this summer in Salt Lake City. This is the meeting of state and government officials and representatives from the livestock and hunting industries to discuss management of wild horses. No legitimate wild horse advocacy groups were invited, nor was anyone with expertise in the science and implementation of humane fertility control. The litmus test for participants, who were invited by a secret “steering committee,” was support for killing and slaughtering America’s mustangs.

At the Advisory Board meeting, Messner misrepresented the makeup of the summit, claiming that wild horse advocates were invited, including the Humane Society of the United States (HSUS), which he said declined to attend. This was a blatant falsehood –HSUS, like AWHC and many other advocacy organizations, was not invited to attend. Board member Ben Masters repeated the lie that HSUS had been invited to the summit. To his credit, he later retracted the statement.

Messner presented the results of a survey of summit participants. Not surprisingly, the large majority supported lethal measures, including “commercial processing” of wild horses and burros for “protein” for zoo animals and for starving people in other countries. (The latter, of course, betrays a complete ignorance of the complex solutions to the problem of world hunger.)

Upon questioning from Kathrens, Messner finally acknowledged who initiated the slaughter summit. It was the Utah Division of Wildlife Resources, proving the public and potentially illegal role of government in organizing a secret summit that discriminated against stakeholders with a specific point of view and that was closed to the public and the media.  Messner also lost his cool when Kathrens pointed out the absurdity of his survey, likening it to presenting the results of a survey on health care in which the only respondents were insurance companies.

SIGNIFICANT INFORMATION PRESENTED AT THE MEETING 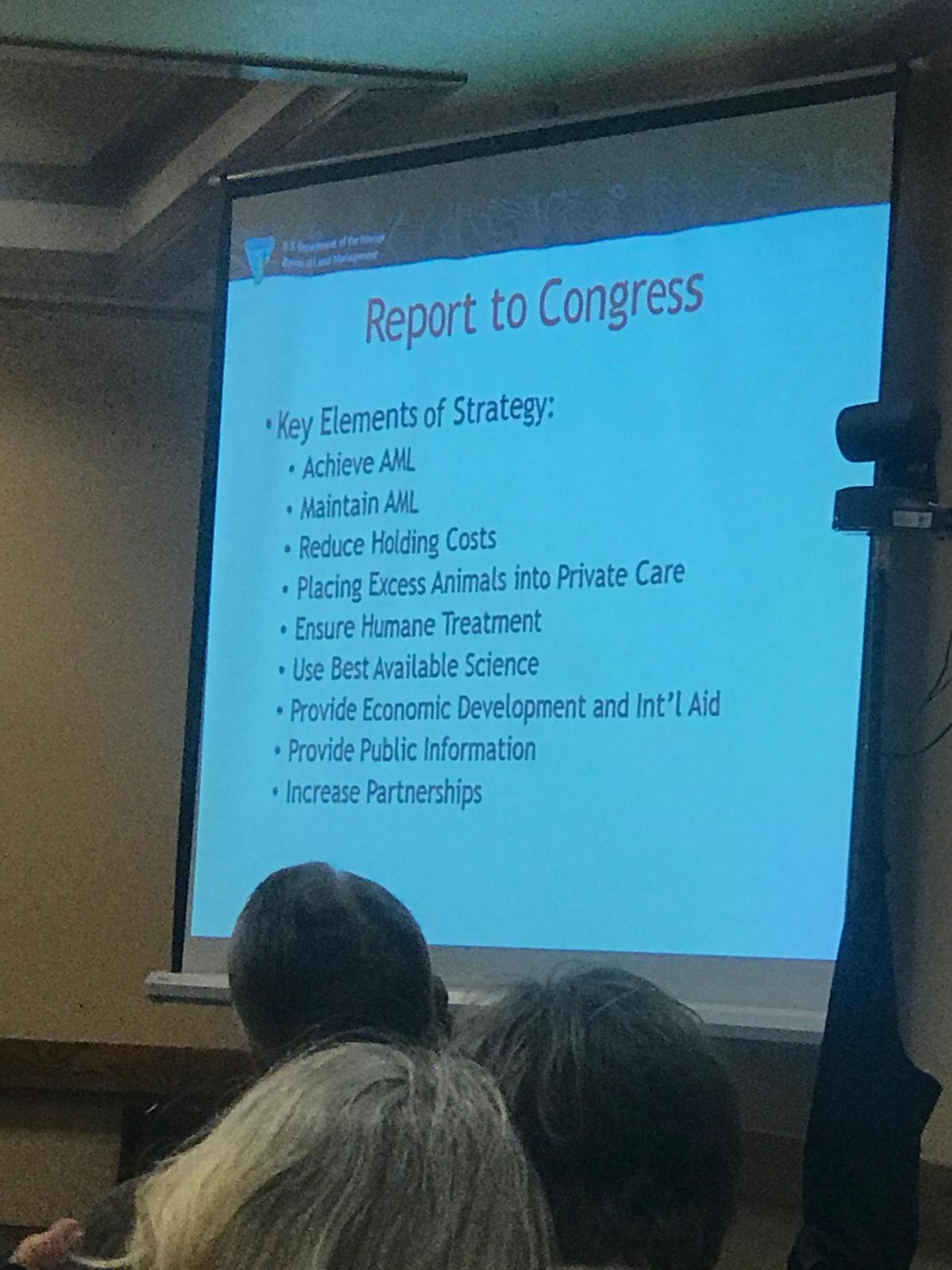 During her presentation, Mary Jo Rugwell, BLM Wyoming State Director, highlighted the key elements that the BLM will focus on when preparing its report to Congress for creating a sustainable wild horse and burro management program and asked the Board for feedback on the following questions related to each of them:

2.      How can the BLM sustainably maintain AML within all HMAs?

3.      How can the BLM reduce and control holding costs for excess animals?

4.      How can the BLM significantly increase adoptions and sales of WHBs?

5.      How can the BLM continue to ensure humane treatment of WHBs?

6.      How can the BLM use best available science to improve management of WHBs?

8.      How can the BLM better provide information to the public?

9.      How can the BLM increase public participation and financial support to the management of WHBs on the range?

More on this presentation and the Board’s “brainstorming” responses to these questions in a future post.

BLM Wild Horse and Burro Program officials Dean Bolstad and Allen Shepherd presented statistics on the program. These include:

·         $2500 – cost to vaccinate a mare with fertility control. (the BLM bases this on the claim that you must catch two horses for every one horse vaccinated.)

It’s incredibly frustrating to sit through these meetings and watch the corruption, ineptitude, and bias of this agency and this Advisory Board. However, we must remember that we have the will of the American people on our side. The killing cannot begin unless Congress okays it, and we still have a shot at beating back the BLM’s deadly plan in the Senate. Instead of looking at this as the potential end of the road for wild horses, let’s look at it as the end of the road for the bureaucratic bumbling of the BLM. Congress and the American people have had it with this example of extreme federal mismanagement. If the BLM can’t fix it, then it’s time to put someone in charge who can. And by fix it, we mean humanely and sustainably manage wild horses to protect them in the manner the American public expects and as Congress intended when it unanimously protected these animals as “living symbols of the historic and pioneer spirit of the West” to be protected “from capture, branding, harassment, or death” as “an integral part of the natural system of the public lands.”