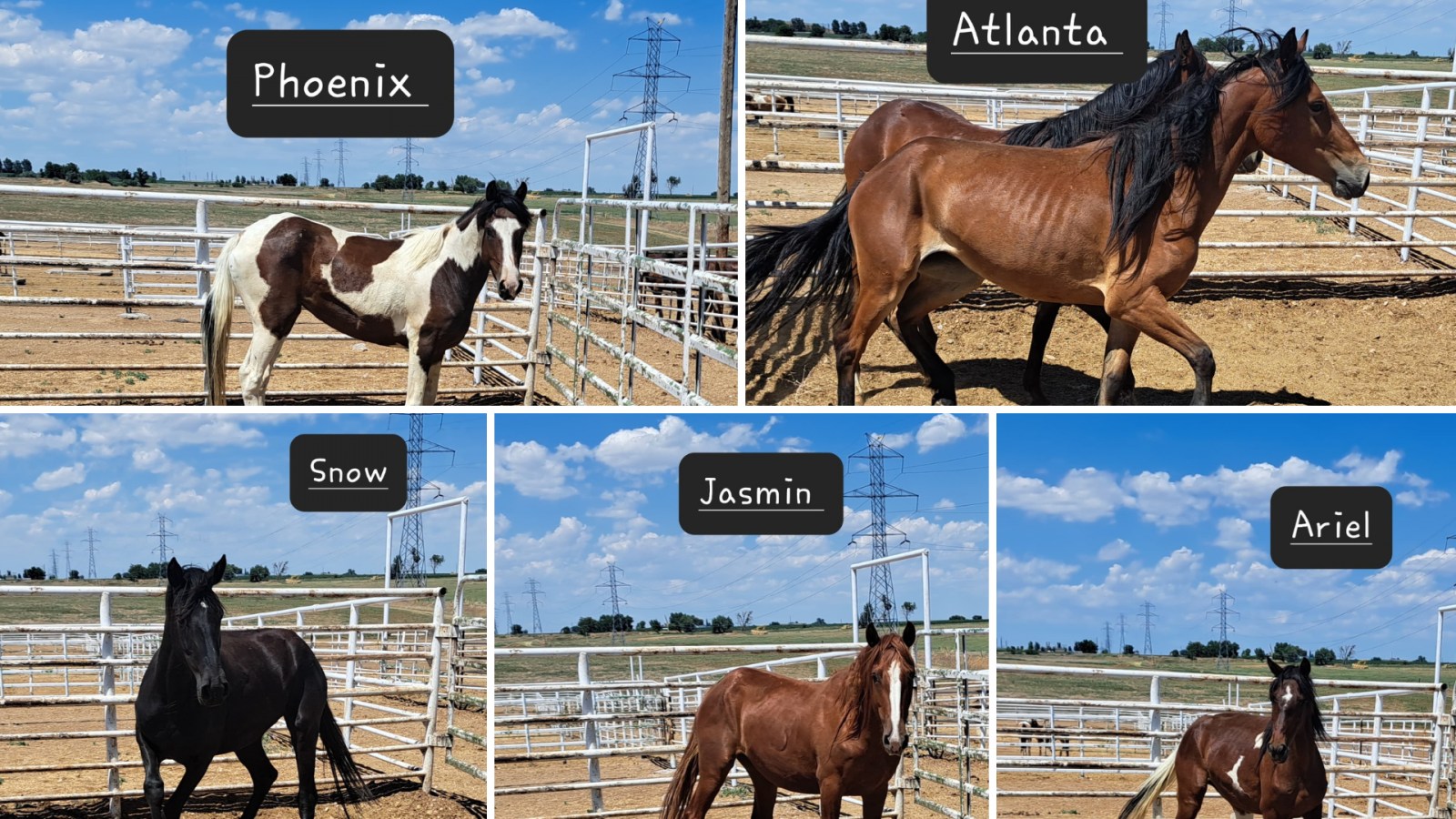 The Rescue of the Eaton 16

The Rescue of the Eaton 16

On the same day AWHC released an explosive investigative report on the deadly consequences of the Bureau of Land Management’s Adoption Incentive Program (AIP),16 BLM-branded mustangs showed up at a notorious kill pen in Eaton, Colorado.

But, the saga began five days earlier in Worland, Wyoming on July 16, 2022, when 28 BLM-branded mustangs were seen at a “loose sale” known to be frequented by kill buyers -  those who buy animals solely to send to abattoirs in Mexico or Canada. Wild horse and burro advocate groups and rescue facilities often have observers on the ground or online to sound the alarm if BLM horses are spotted at these auctions.

On July 16, two of the mustangs were purchased by Evanescent Mustang Rescue. A horse trader was the high bidder for six and the remaining 20 were purchased by Jason Fabrizius, a Colorado trader and kill buyer who sells horses online. He claims to be giving the horses in his pens a “second chance” by offering them for sale on the internet. But, he bumps the purchase price in order to make a profit, and if they don’t sell, he ships them to foreign slaughterhouses.

Sure enough, the 16 mustangs showed up on Fabrizius’ website. Clare Staples, founder, and president of the board of directors of Skydog Ranch Sanctuary, saw them and posted the news on Facebook. She said those horses cost around $200 to $300 each when purchased in Wyoming.  “But [Fabrizius] quickly marked them up to $850,” she said. Staples added that Fabrizius and other kill buyers play on the fact that mustang rescues and other caring people will see the horses online and scramble to buy them. “It’s sort of blood money really. I mean, he makes a 300% profit on each horse that he can sell.”

She calls it a racket. “That’s why we ask our followers to call their [congressional] representatives,” she explained. “The Holy Grail for these horses is to get legislation passed that would stop them from being shipped to Mexico or Canada and essentially shut this down and put these kill buyers out of business.”

Amelia Perrin, investigation manager for AWHC, said “A private buyer purchased four mustangs off the Fabrizius lot, which left 16 that were slated for slaughter.”

Staples knew Skydog Ranch could not afford to take 16 horses. “But, I thought if I could get them seen by a large number of people that, at the very least, maybe private individuals in Colorado or other places might give them a home,” she said.

Did we mention that Staples had less than 24 hours to come up with bail for 16 mustangs at an average of $750 each? That came to about $12,000 not including hauling, quarantine, vet care and training fees.

Staples got a message around 5 PM Saturday, July 23, that the Eaton 16 were shipping to slaughter at 10 AM Sunday. “I had had a bad day,” she explained. “I was really pissed off about something.” So she put that energy into rescuing the mustangs. “I got on Facebook and was messaging with different people,” she said. Then, results started taking shape. A Colorado sanctuary wanted five. An ex-cop who runs a posh pony club in upstate New York was good for 11.

But, she still had to pay Fabrizius before 10 AM Sunday and it was now 10:30 the night before. Less than twelve hours to go. “It was a real Hail Mary because I was trying to pay for them that evening,” she said. “My PayPal© wouldn’t go through. My Venmo© wouldn’t pay that large an amount!”

That’s when AWHC stepped in and agreed to split the cost 50/50, which Staples said made it much easier. “I’m so grateful to Suzanne [Roy, AWHC director] for partnering with us.” Roy knew it was now or never for those mustangs. “We thought we had lost them,” she said. “It was their last chance.”

Perrin said it’s not hard to lose a horse in the web of kill pens and loose sale auctions across the US. “Horses start out at one location and they just go everywhere,” she explained. Perrin checks kill pens online every night and a volunteer checks them throughout the day. “It’s a big, messy, gross puzzle,” she said. “The horses just scatter.”

AWHC has so far confirmed that several of the Eaton16 and other mustangs at the Wyoming auction had been adopted through BLM’s Adoption Incentive Program (AIP). More are expected to be confirmed as AIP horses as soon as brand numbers and/or titles are obtained.

The AIP pays adopters $1,000 per animal to take up to four, untrained wild horses or burros per person. The full incentive is paid out one year after the date of adoption once the adopters receive title to their animals.

“The Eaton 16 fit the pattern of victims of the AIP,” explained Roy. “They're young, around 2 or 3 years old, and completely unhandled. Sometimes they arrive at auction with the BLM tag still around their necks.”

The animals have been wrenched from the range by way of a helicopter roundup and torn from their families. In a flash, they go from a wild, free-roaming life to terrifying truck rides and crowded holding facilities, essentially feedlots, where mares are separated from stallions and stallions become geldings. Then, they are purchased, kept for a year, and shipped to an auction house where they are sold into slaughter. A horrid life and a bad end for America’s iconic wild horses.

Staples explained that the person on the ground in Wyoming heard one seller bragging about how he and his wife had received $8,000 (from the BLM) by adopting four mustangs each and how they were selling them to get even more money. “It’s a lot easier for them to take a bunch of yearlings because they’re really easy to manage,” explained Staples. “So they buy these babies and then turn them out with their cows or let them graze, keep them alive and when they get their second [BLM] payment, they take [the mustangs] straight to an auction and sell them there.”

AWHC investigation results show that Bob Nicol and his wife Detta held title to eight horses sold in Wyoming. Two of the Nicol horses were rescued from Eaton and the remaining six were identified by AWHC investigators at the Stroud Oklahoma kill pen. It is believed that these horses were bought at the Worland Auction to be resold or sent to slaughter, similar to the Fabrizius operation.  “The name Nicol rang a bell for me,” said Perrin. “So I checked our database and found Wayne Nichol, with a similar last name, whose horse titles had the same address as Bob and Detta.” Wayne had previously flipped at least two BLM horses he adopted through the AIP at an Oklahoma kill pen.

AWHC recently identified the adopters of eight more horses from the group of 16 as titled to the Harris family, a name well-known to investigators. AWHC’s investigative report shows the Harris family as a group of individuals adopting large numbers of BLM animals multiple times and who fit the pattern of those who abuse the AIP.

“I have been waiting for the Harris animals to show up in the slaughter pipeline since I first uncovered the family in September 2021.” Said Perrin.

It’s a family affair, which isn’t unusual for AIP horse traders. In fact, AWHC has documented at least two dozen groups of related individuals who participate in this scheme. One group raked in $82,000 in taxpayer incentive money through second and third rounds of adoptions. “There are no BLM regulations that will stop people like Bob and Detta or the Harris family from getting more mustangs and collecting more incentive payments,” Perrin said.

As AWHC’s investigative report shows, the AIP is causing a massive flow of unhandled, untrained wild horses and burros into the slaughter pipeline. “Until the BLM stops paying people to adopt wild horses and burros, we will face a never ending stream of these federally-protected animals flowing into the slaughter pipeline,” says Perrin, who led AWHC’s 19-month investigation.

As for the Eaton 16, Roy is grateful to Skydog Sanctuary, who worked so hard to locate placement for these animals. “These innocent wild mustangs were hours away from shipping to slaughter in Mexico,” she explained. “Unfortunately, we have only put our thumb in the dike,” she added, noting that six BLM mustangs and four BLM burros currently await their fate at kill pens in Oklahoma and Texas.

Since 2021, AWHC has supported the rescue of at least 131 BLM-branded mustangs and burros from kill pens across the West. “We can’t save them all, but we can work as hard as possible to shut down this pipeline that was created by the cash incentive program,” said Roy.

A rescue of this scale is not cheap. AWHC is grateful for the Rescue Fund that supports rescues like the Eaton 16. Contributions to the Rescue Fund will be used by AWHC to  to assist more horses in need.