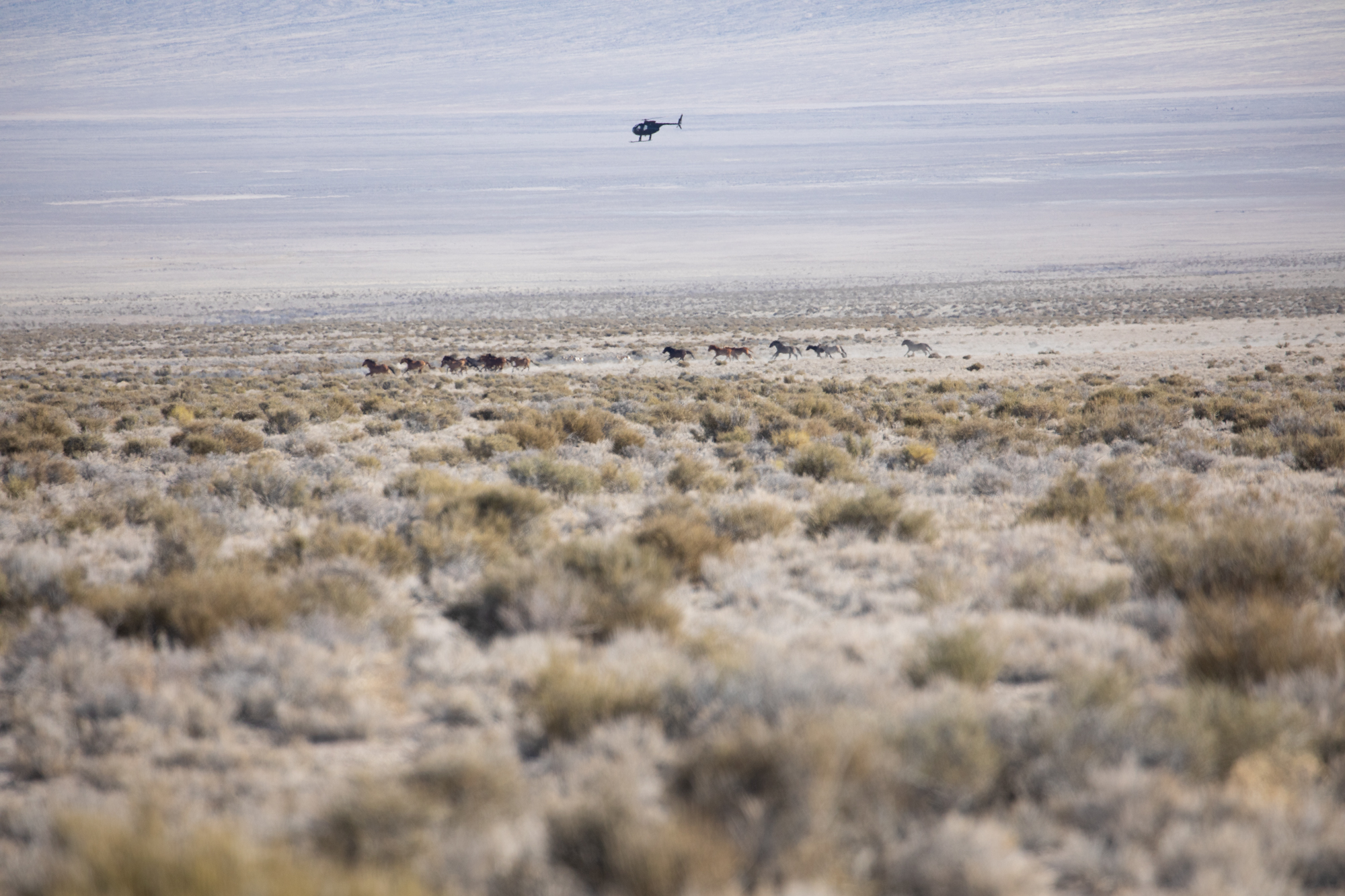 The Sulphur Herd Management Area (HMA) encompasses approximately 265,675 acres, in Utah. The Bureau of Land Management (BLM) currently estimates that approximately 600 wild horses call the HMA home. However, the BLM’s unscientifically low Appropriate Management Level (AML) for the HMA – the number of horses the agency claims that the range can sustainably support in conjunction with other animals and resource uses – is 165 to 250 horses.

The last time this HMA was rounded up was in 2020. Read our report from the ground here, and watch a video of what it was like to be there in person here.

Even while the helicopters fly, removing our federally protected wild horses, the BLM continues to authorize thousands of sheep and cattle to graze in nine allotments that overlap with the HMA. It is time for the BLM to manage wild horse habitat for the wild horses.

One of the primary beneficiaries of fewer wild horses in the Sulphur HMA is none other than Tammy Pearson. Last year, BLM appointed Pearson, a Beaver County Commissioner and public lands rancher, to the agency’s National Wild Horse and Burro Advisory Board representing the position of Public Interest, in which qualifications are defined as “general public with special knowledge of equine behavior.” AWHC continues to believe that Pearson has a clear conflict of interest that disqualifies her from serving in any position on the Advisory Board besides a seat representing livestock.

This roundup will cost the taxpayers at least $311,500 to roundup approximately 376  beloved horses from the HMA. At this time it is unclear how many horses will be treated with fertility control and returned to the HMA. However, if all 376 wild horses are permanently removed from the HMA, this action would also bring along with it the lifetime cost, according to BLM’s own estimate, of approximately $18 million to house the horses for the remainder of their lives in government holding corrals. The contractor for this roundup is Shayne Sampson.

On top of that, the taxpayer foots the bill for federally-subsidized livestock grazing on public lands as well. The federal grazing fee remains at its historic low of $1.35 per animal per month. That’s a steep discount, thanks to the taxpayer subsidies that prop up this federal entitlement program. (Estimates indicate that the overall cost to taxpayers for the federal grazing program could be as much as $500 million annually.

Helicopters are scheduled to fly starting on February 8, 2022. We will update this report as the operation progresses.

February 16, 2022: 6 wild horses were captured and the roundup concluded.

February 15, 2022: No wild horses were captured but there were a staggering three deaths:

February 14, 2022: 27 wild horses were captured and there were no deaths reported.

February 13, 2022: 51 wild horses were rounded up and removed and there was one death after the BLM euthanized a 17-year-old grulla stallion that was blind in his left eye. 350 wild horses have been captured so far and there have been 8 deaths.

February 12, 2022: 29 wild horses were captured and removed and there was 1 death after the BLM euthanized a 9 year-old sorrel mare that was blind in her right eye.

We left the Border Inn at 7:00 AM and traveled to a new trap site located about 39 miles Southeast of Baker, NV. We were directly on the other side of the mountain from where trap #2 was.

Once we arrived, we waited for about an hour while the trap was being constructed and an observation spot located. They had a lot of difficulty finding a good viewing spot due to terrain. There were many hills, ravines and trees. The observation site ended up being right on the fence line dividing Nevada and Utah.

We were on the Nevada side, the trap was on the Utah side. The trap was to our East closer to the mountain. We could see the wings and most of the trap but we were over 1.5 miles away which made viewing very difficult.

In the beginning, the pilot attempted to bring in 4 horses but they all spotted the trap and diverted away. The sun caused the trap wings to glow making it easy to see. They spent some time readjusting the wings. The pilot attempted to bring in a group of 8 from the Nevada side and they ran right behind us. But getting them to go through the opening of the fencing was proving difficult. They went out of sight and I am unsure where they ended up.

We then left for temp holding and arrived before the last of the horses did. I was able to stay and observe for an hour and watched them unload 2 trailers from a distance. They fed and watered them while I was there. Vet was on site doing inspections. Horses were calm. Body score 4-5 with a couple score 3. We departed at 6:30 AM from the Border Inn and traveled 47 miles South to the observation site located a few miles off HWY 21. We were at the same location as day one of the roundups where viewing is more difficult due to distance and terrain. The trap was nearly a mile from observation and tucked out of sight behind a knoll.

The BLM employee that is usually on-site with me needed to be home today. I was told that because I am a trusted individual, I could stay unsupervised at observation. They would come and check in occasionally and see if I had questions or concerns and relay information to me as needed. I was still within sight of the ranger down the road.

We were done for the day so they took me to temp holding.  The horses were calm, fed, and watered. I noticed a couple of mares with cuts on their heads but they were not actively bleeding and the cuts didn't seem severe. 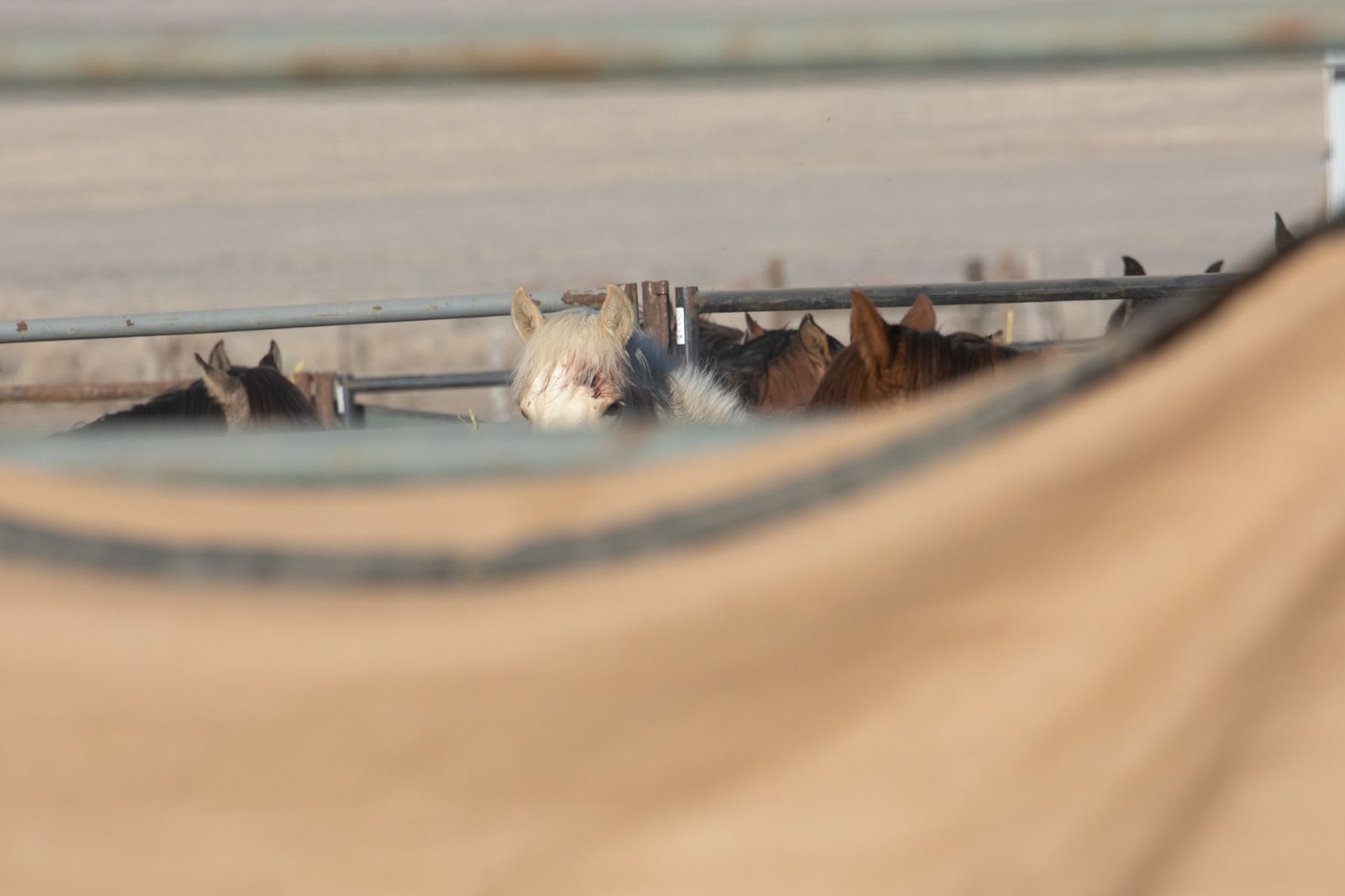 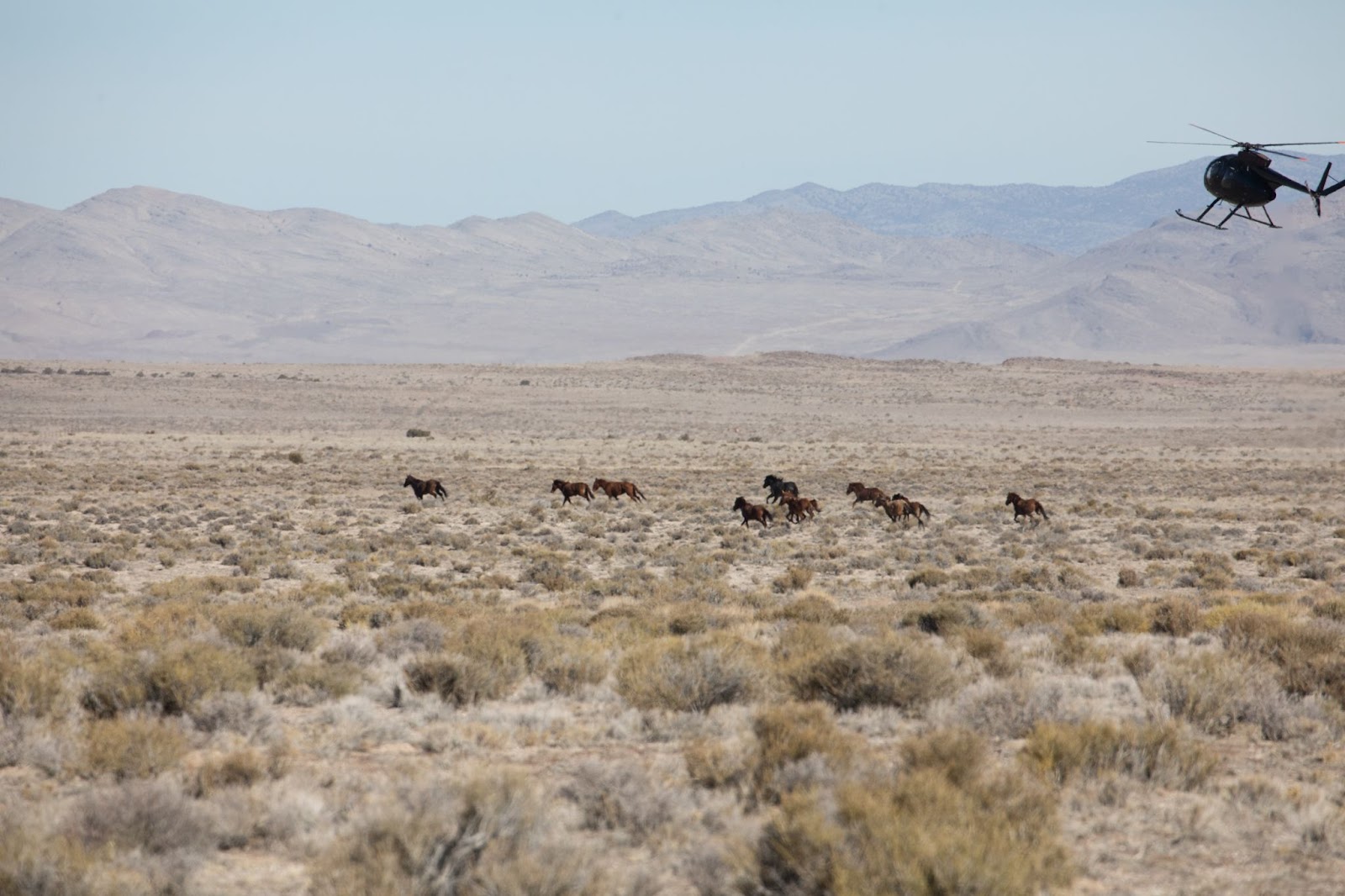 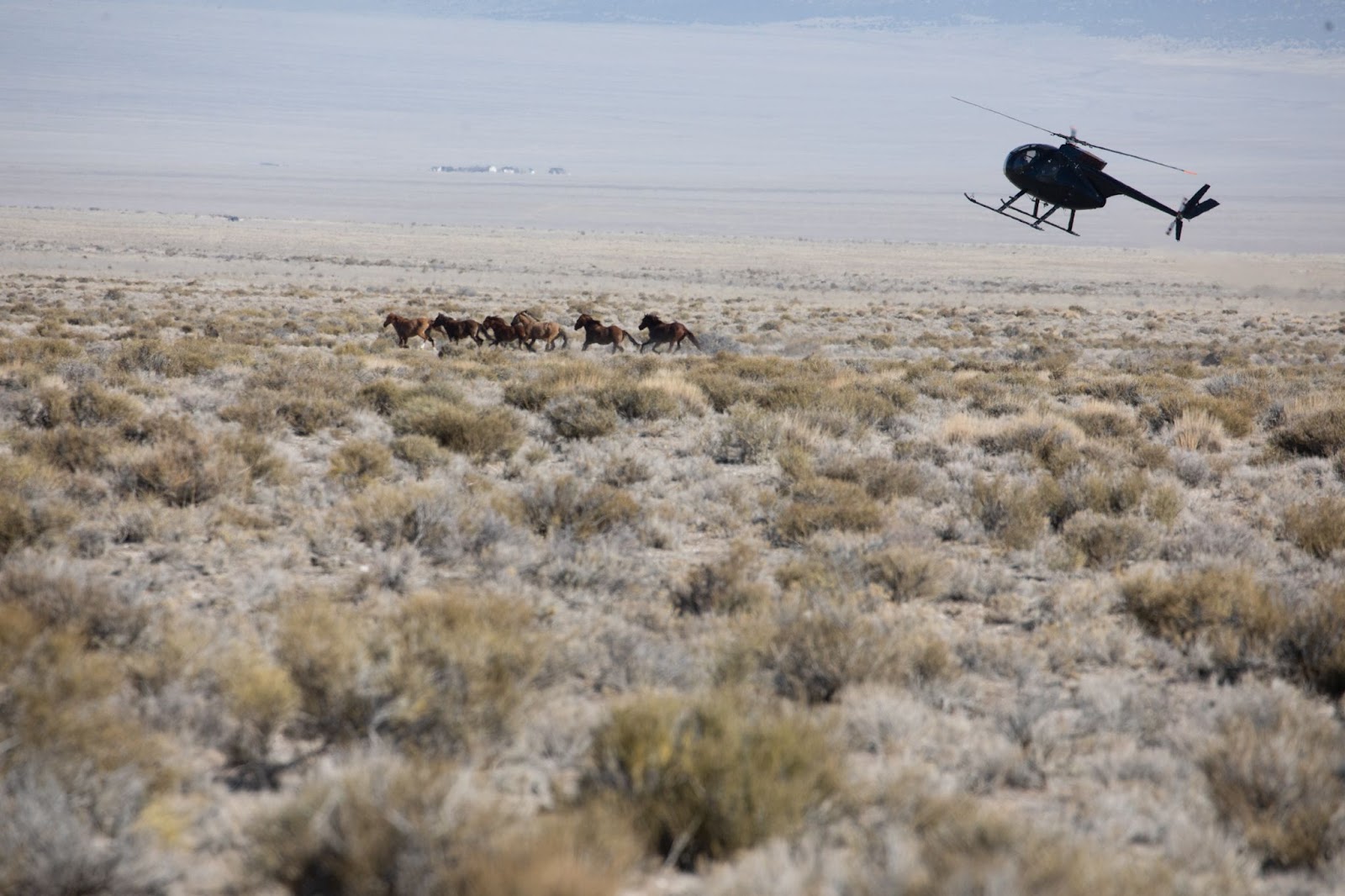 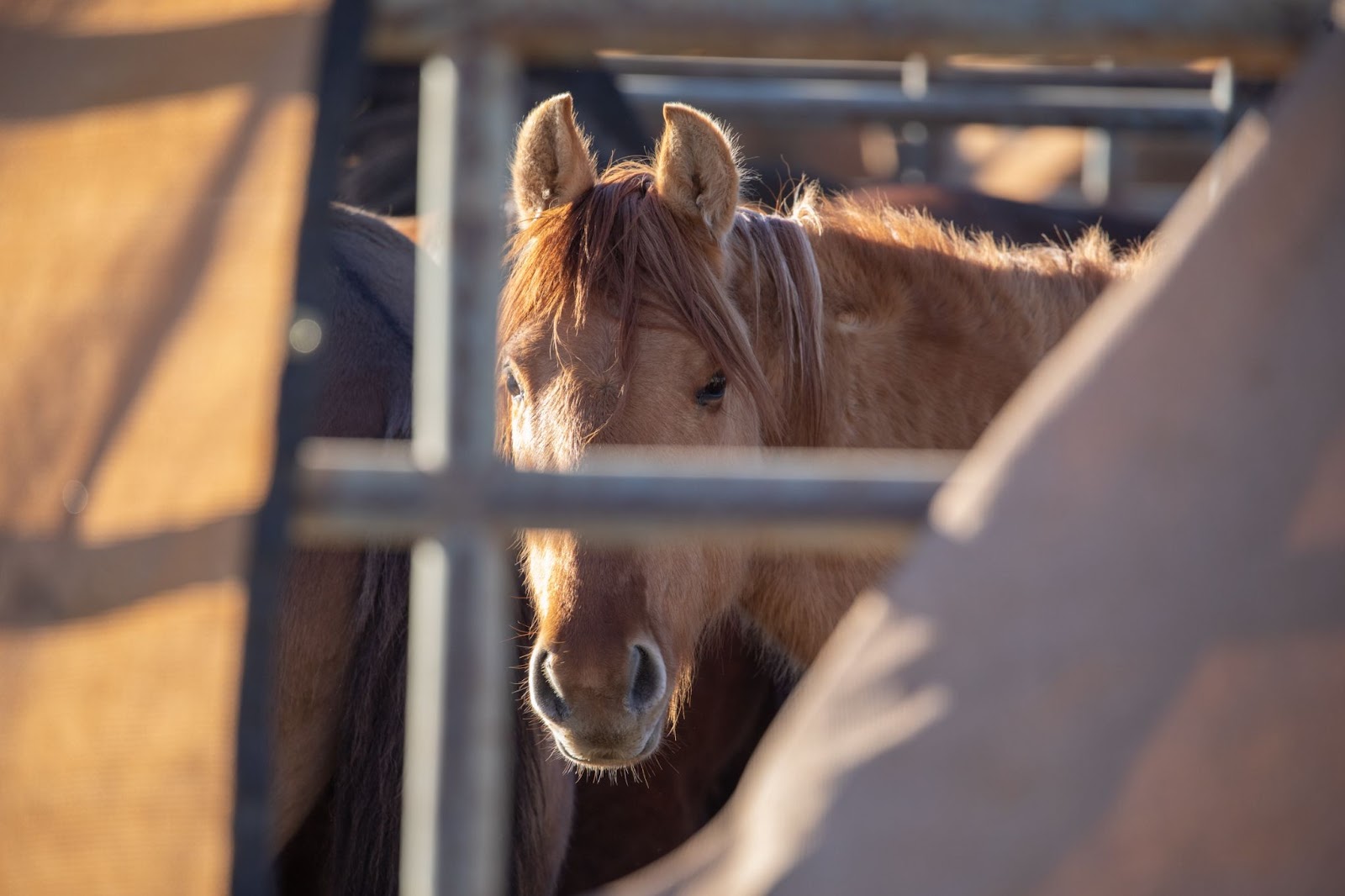 We left the Border Inn meeting spot at 6:30 AM and traveled 36 miles South to the observation site located off HWY 21. We hiked up a hill so that we could be overlooking the area from which the horses would be running in from and had a view of the trap site. 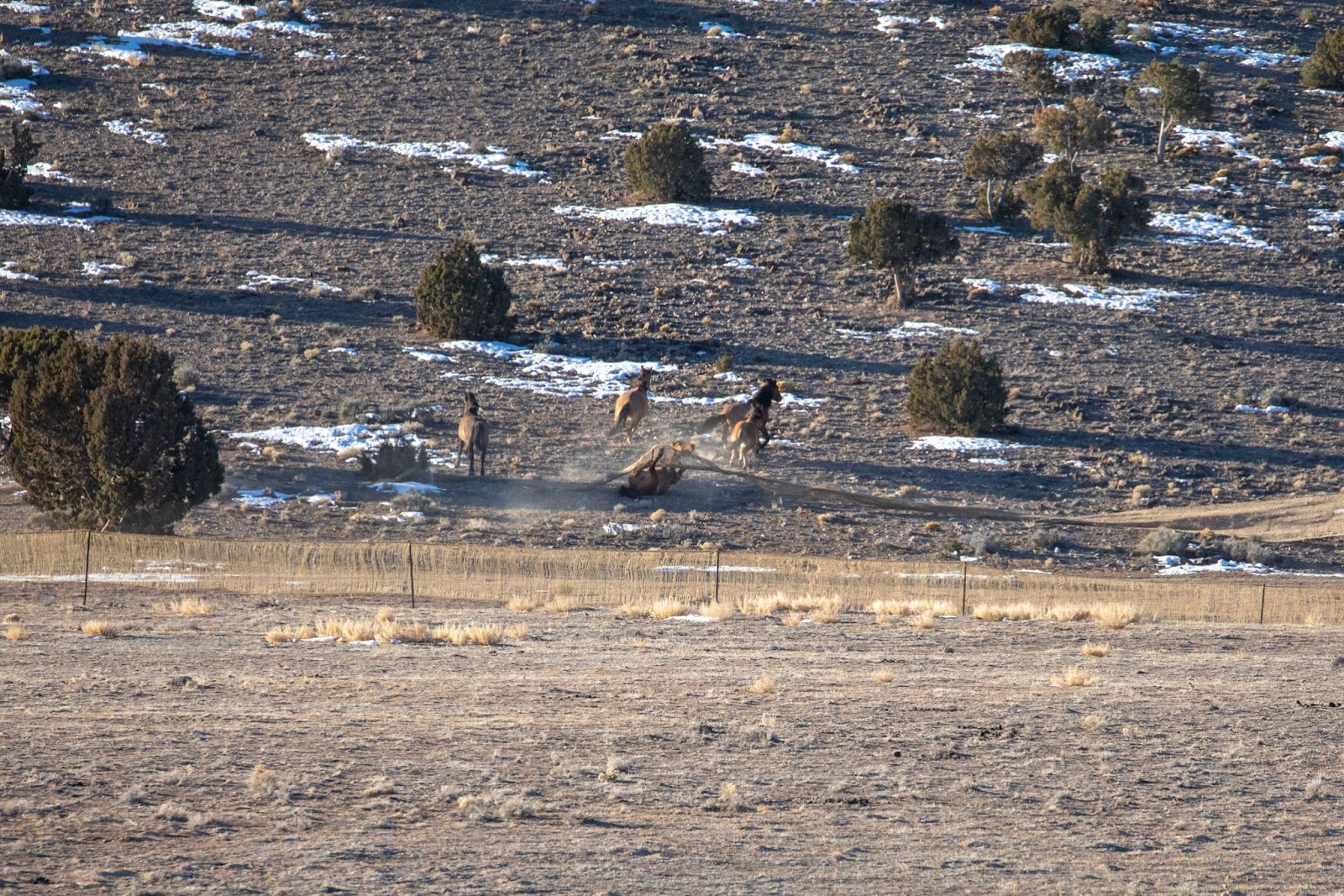 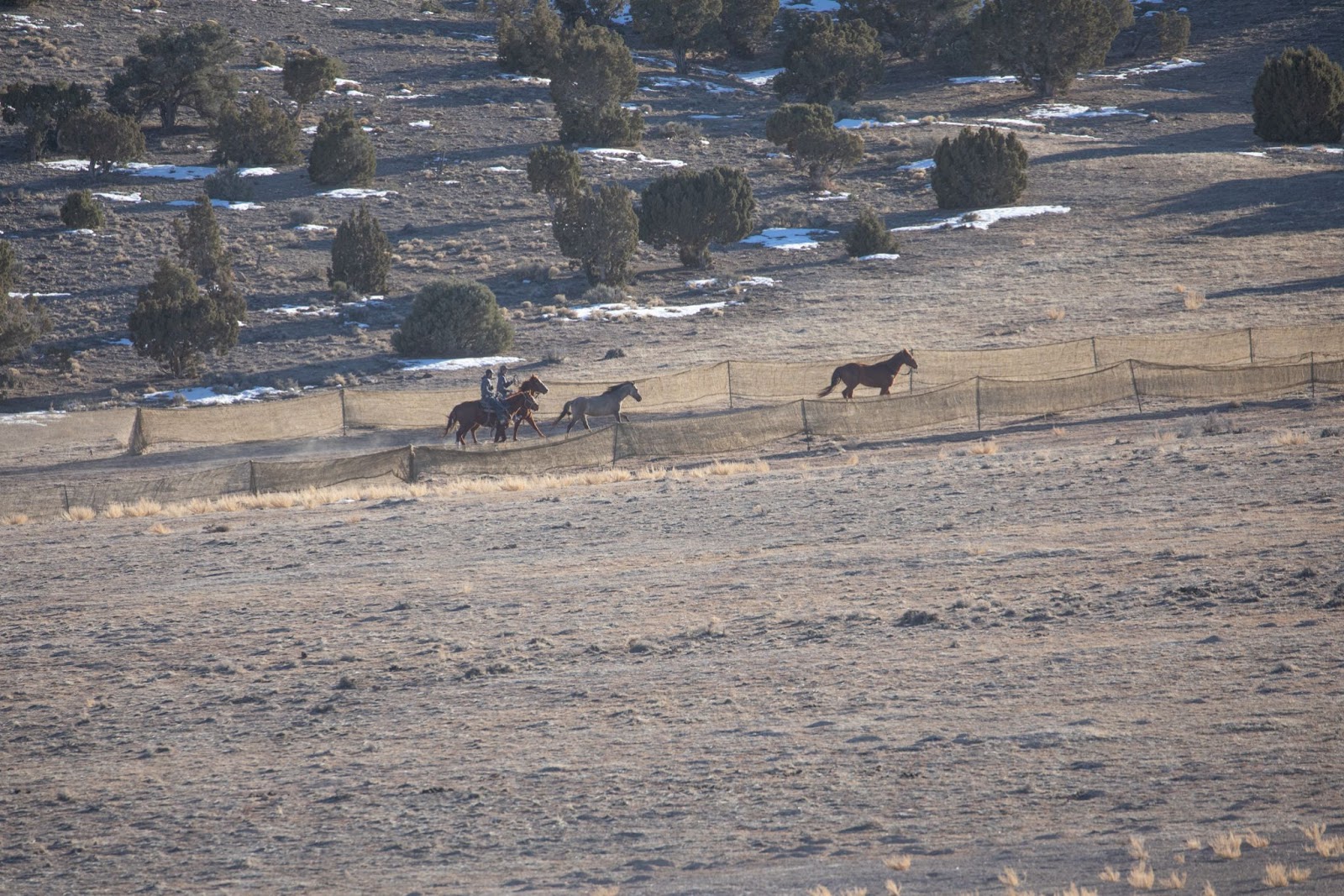 We were done for the day.  I went to temp holding and waited for the last trailer to unload and then I was able to walk around. Horses were calm and had already been given food and water.  The vet was on site assessing the horses. They had body scores of 3-4. 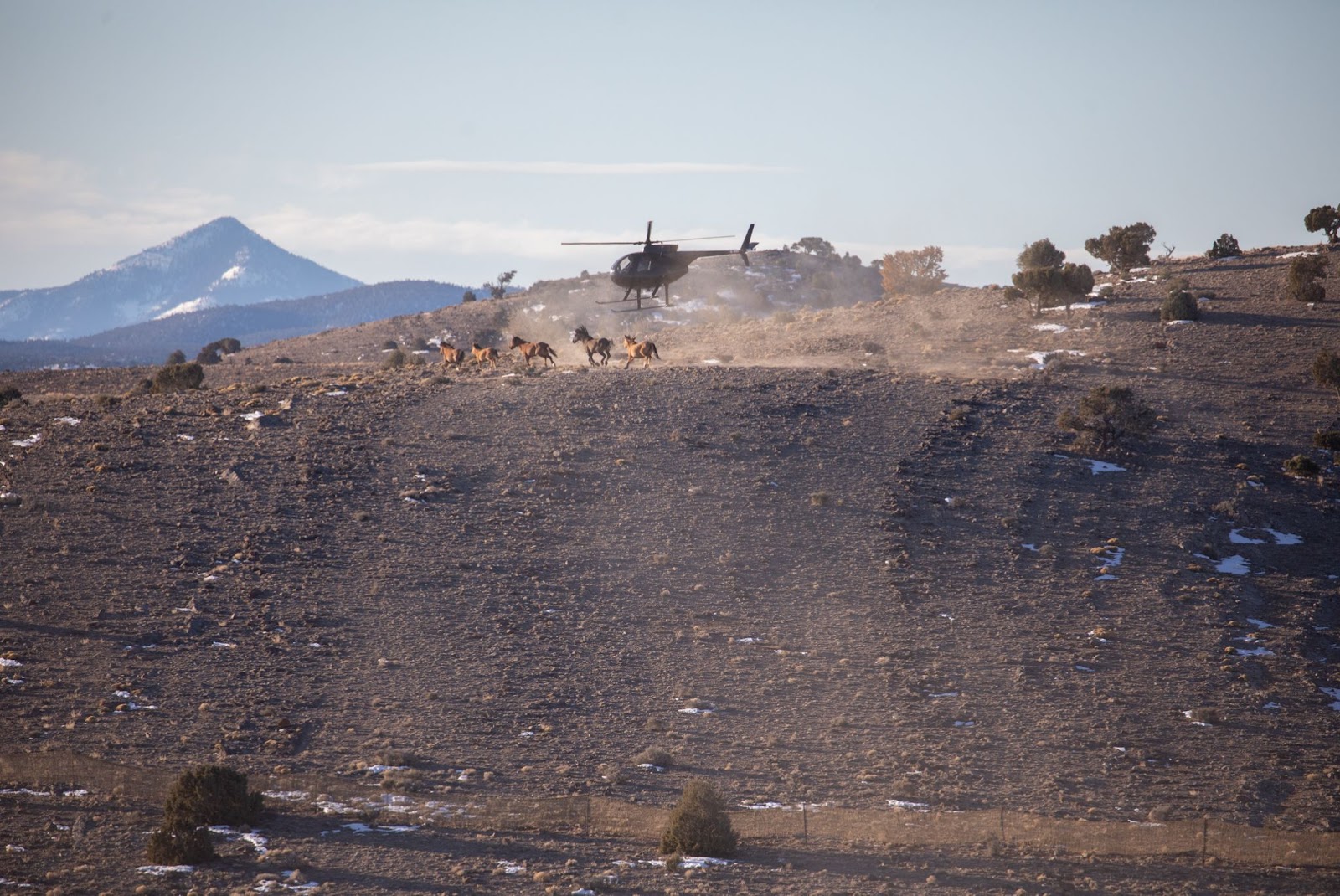 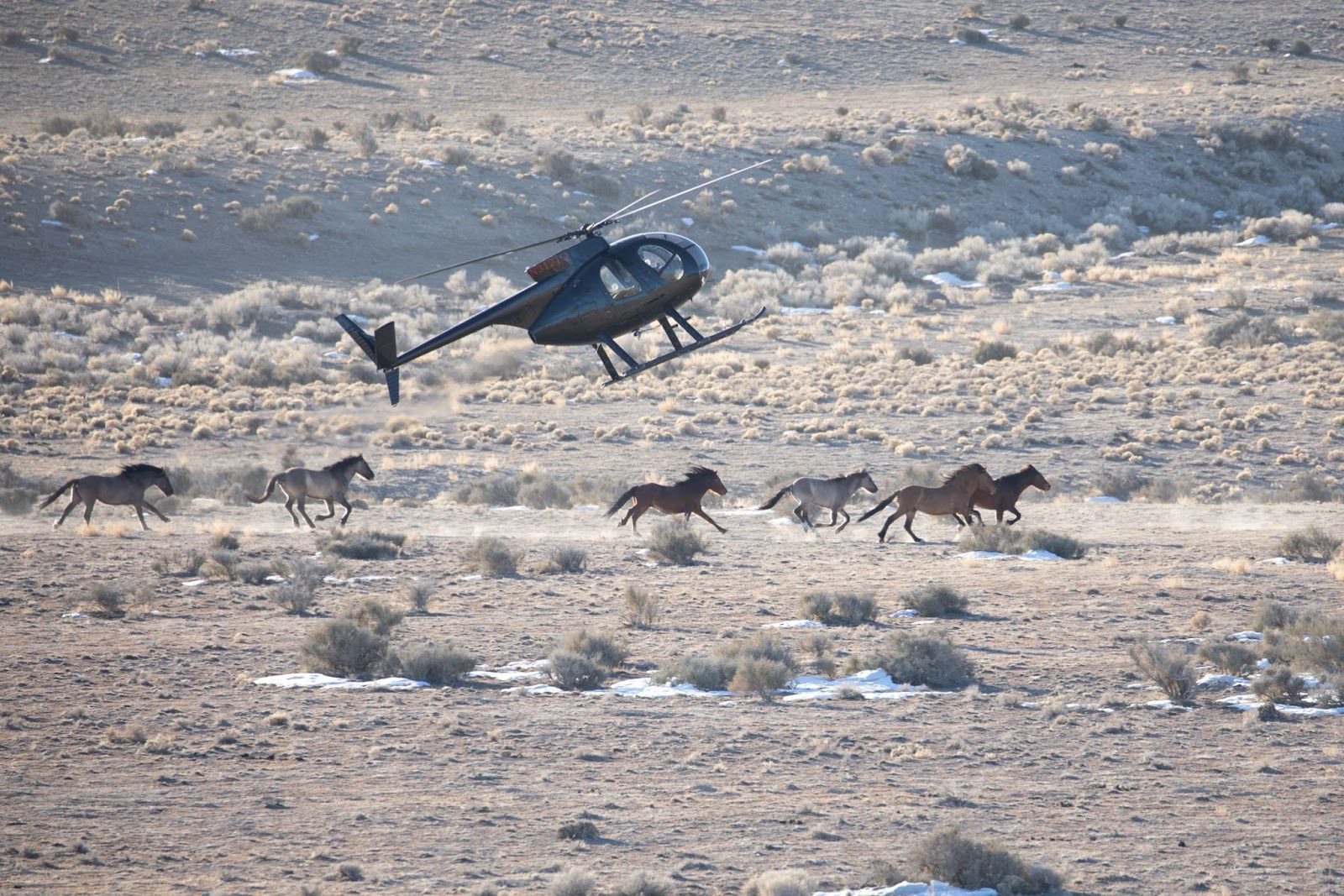 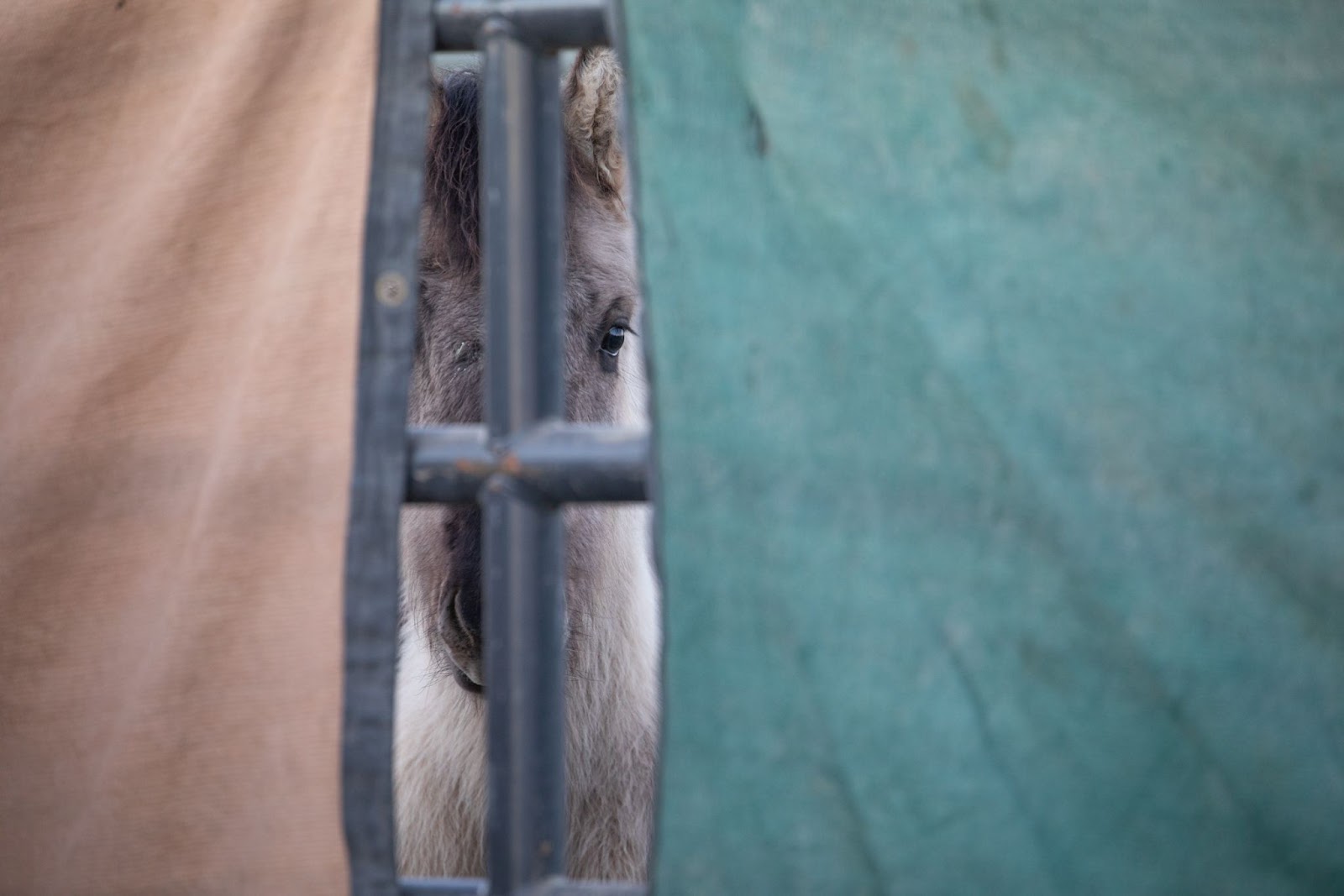 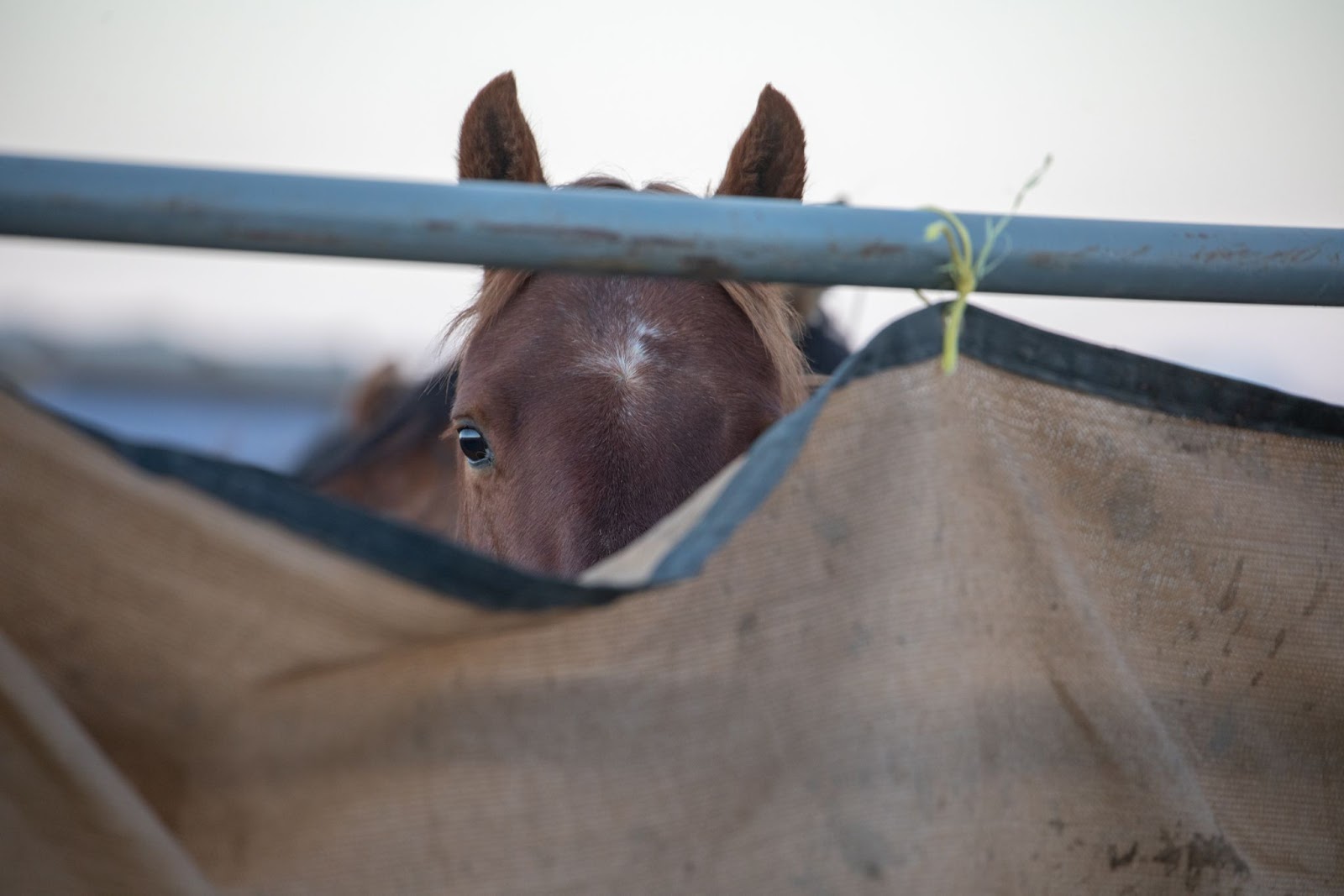 We began the day early meeting at the Border Inn on the UT/NV border. We left at 5:30AM to travel to the observation point which was 47 miles South located off HWY 21. We sat in our vehicles for an hour to stay warm and wait for the sun to rise. It was mid 20's early and by the end of the day was 55°.

The trap site was nearly a mile away from our observation point. I could see part of the wings but not the trap as it was blocked by a knoll. We could see most of the approach to the wings but once the horses went over the knoll, they were out of sight.

After the conclusion of today’s operation, We headed to temporary holding and arrived at 2:30 PM. We waited until a little after 4 PM before walking around. While waiting, I was able to watch the last trailer unload from a distance. They had water and I watched them place food around the pens.  The horses were calm.

I inquired about how many horses will be turned back.  I was told up to 50 and that the studs would be held at temporary holding until release.  But the mares will be taken to Axtell until treated with GonaCon. They will pick those to be released based on traits in line with the unique nature of this herd having bloodlines from the old Colonial Spanish Horse. 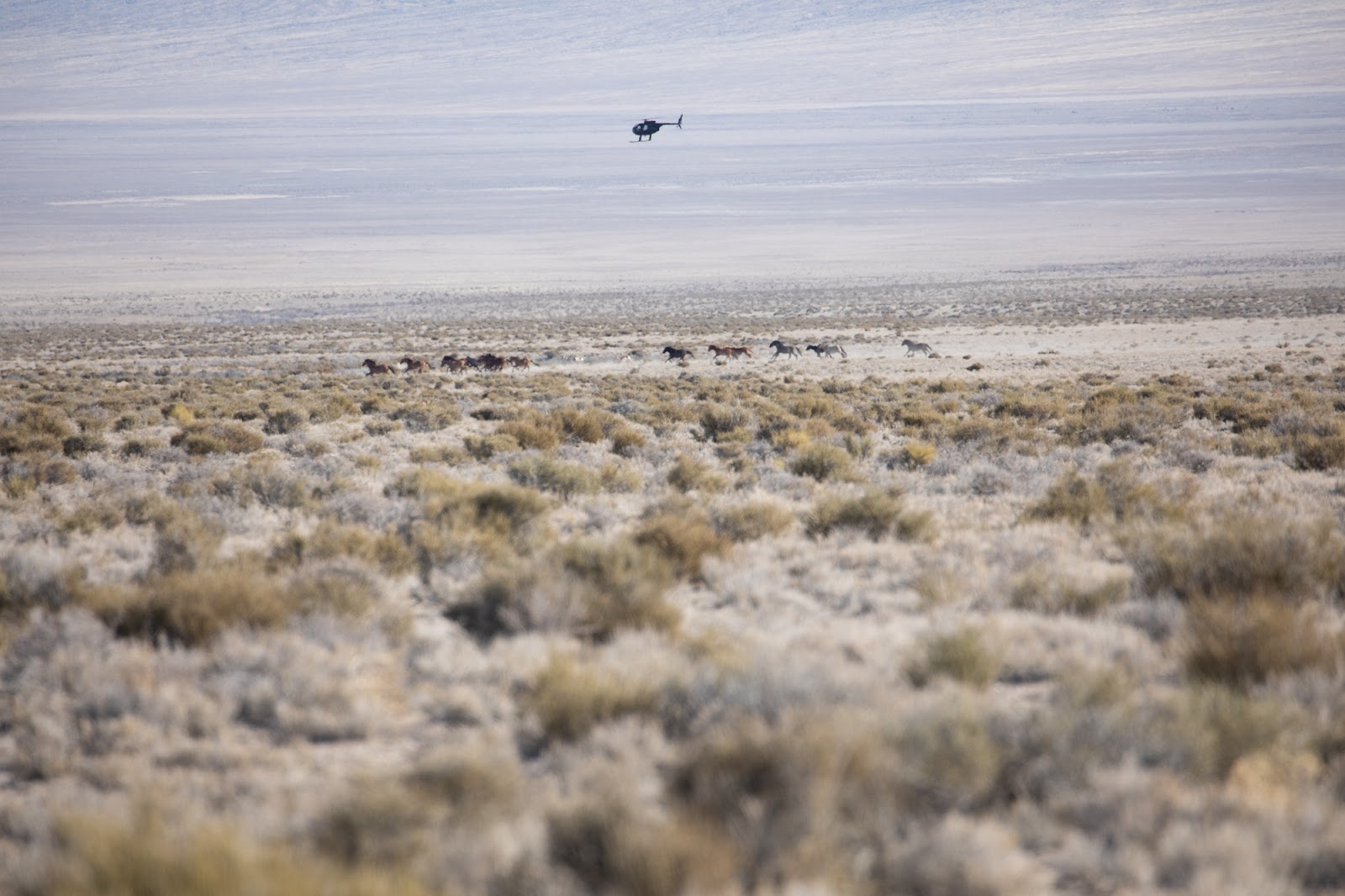 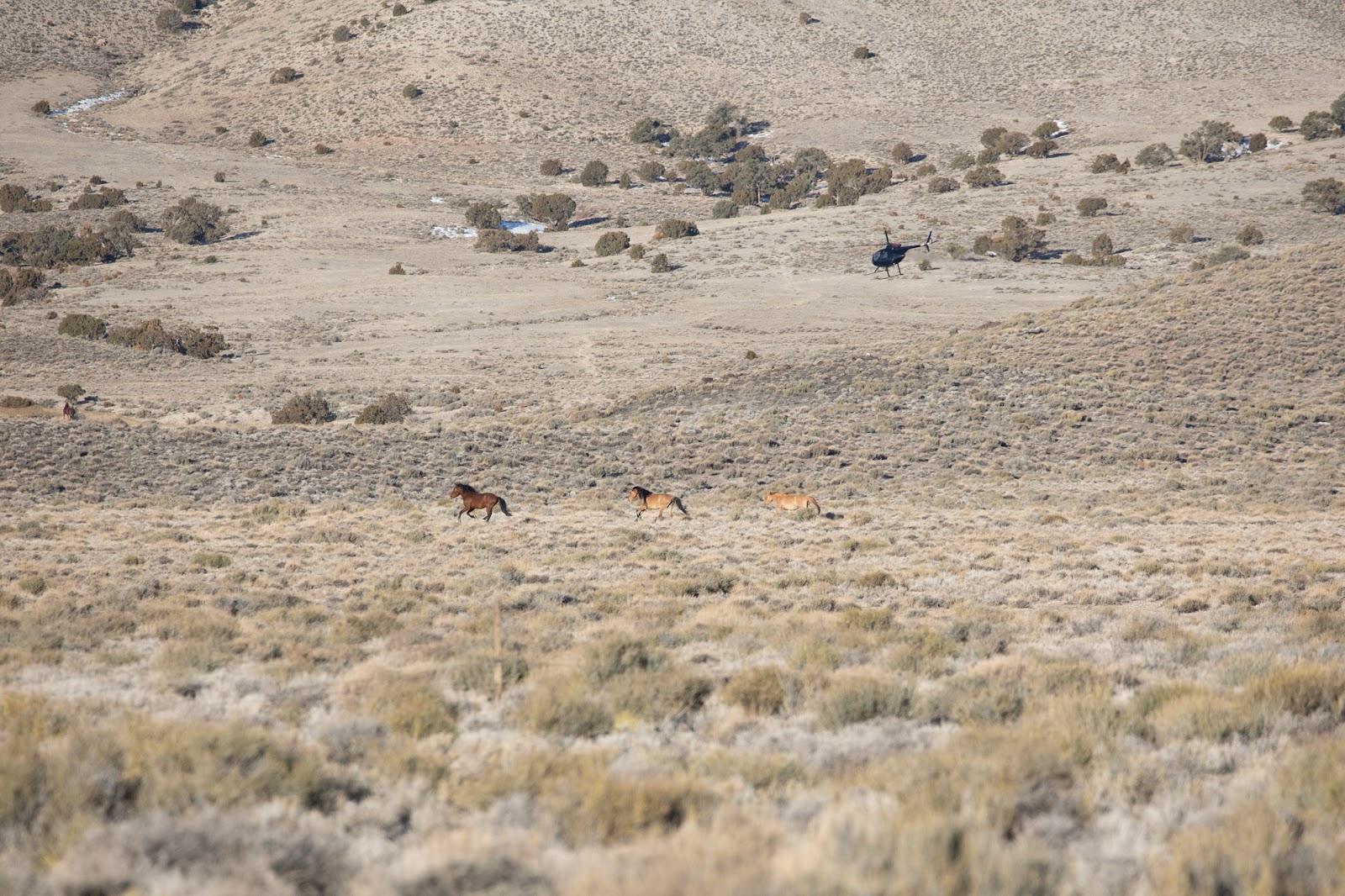 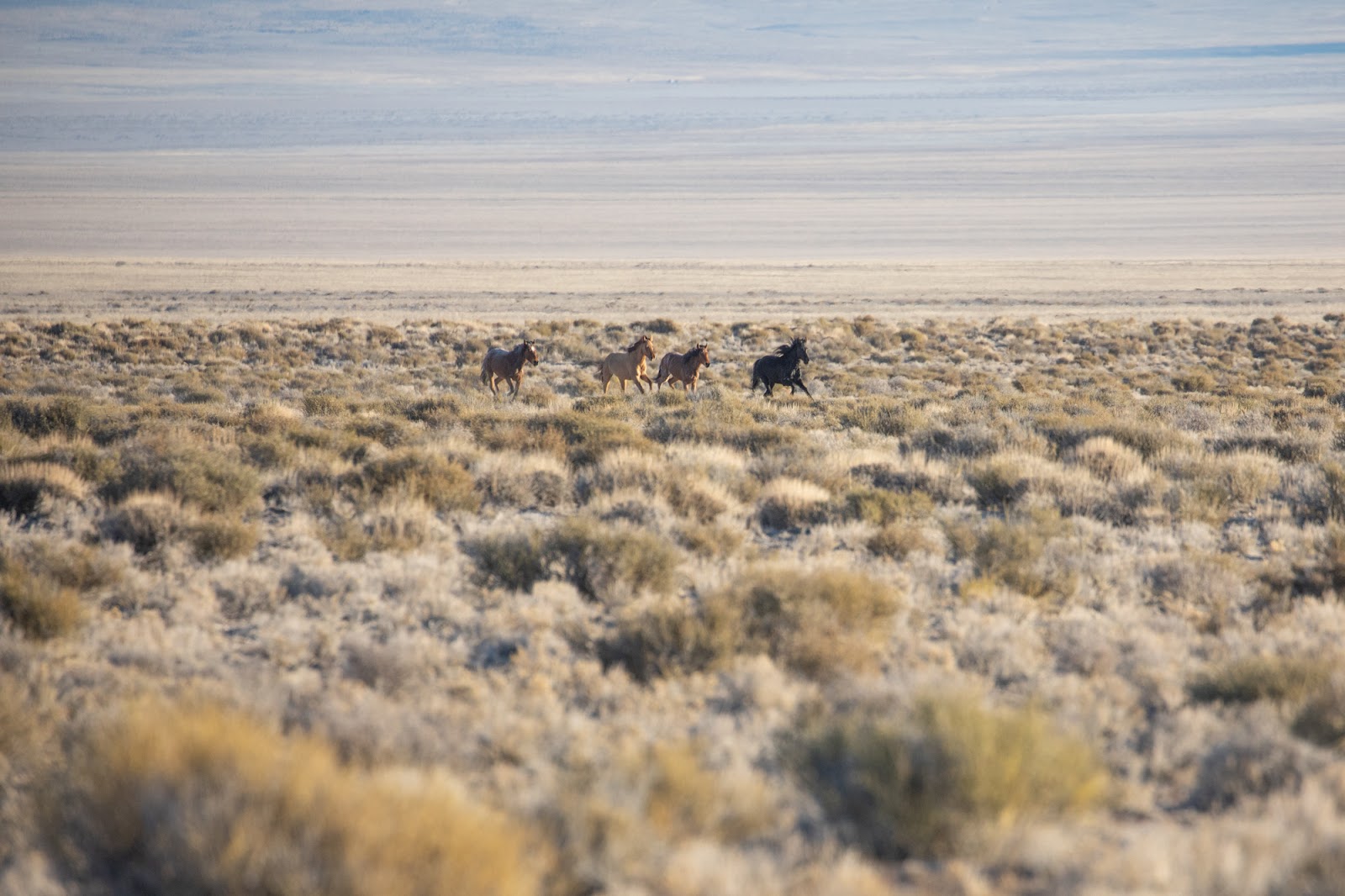 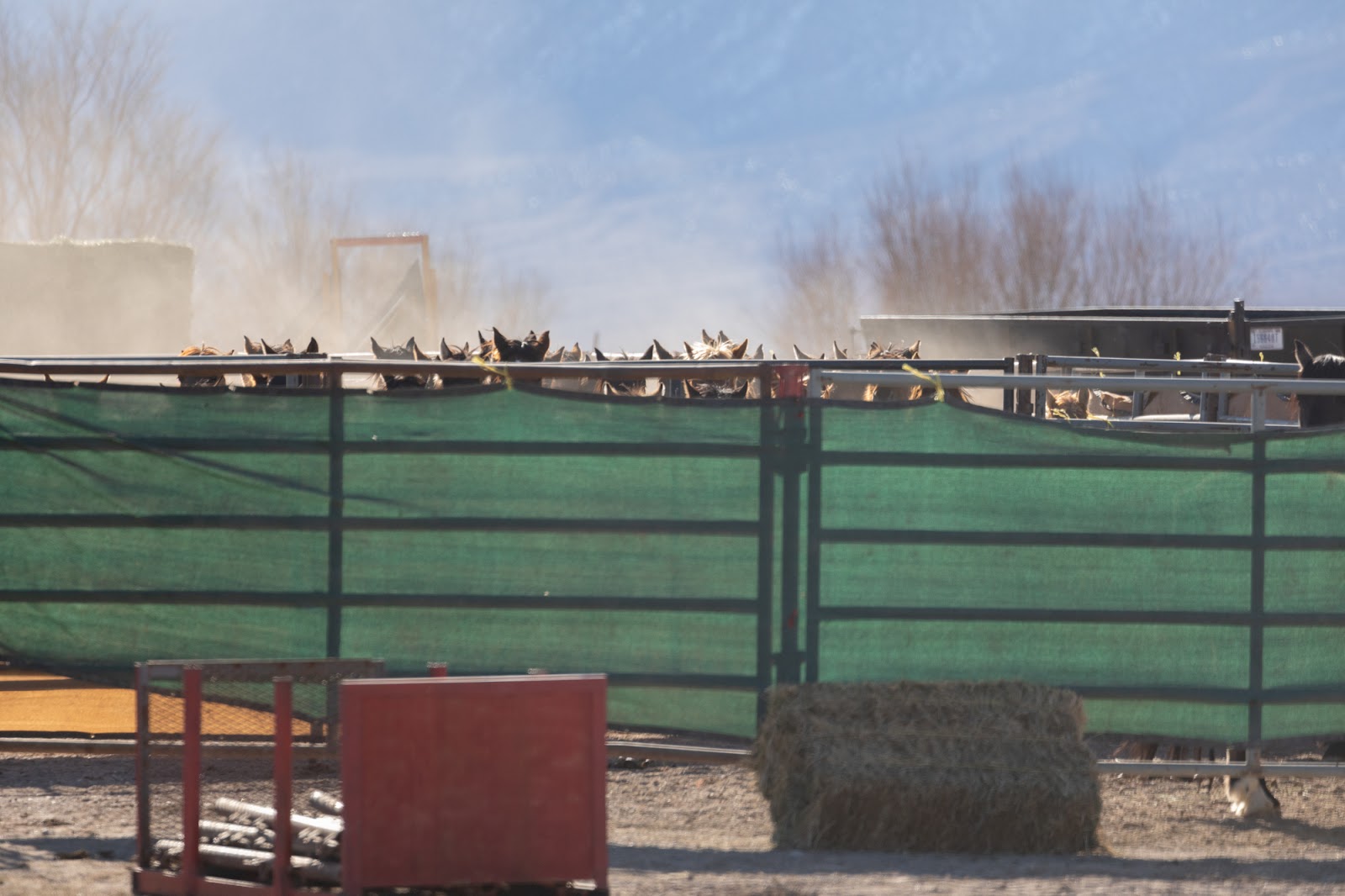