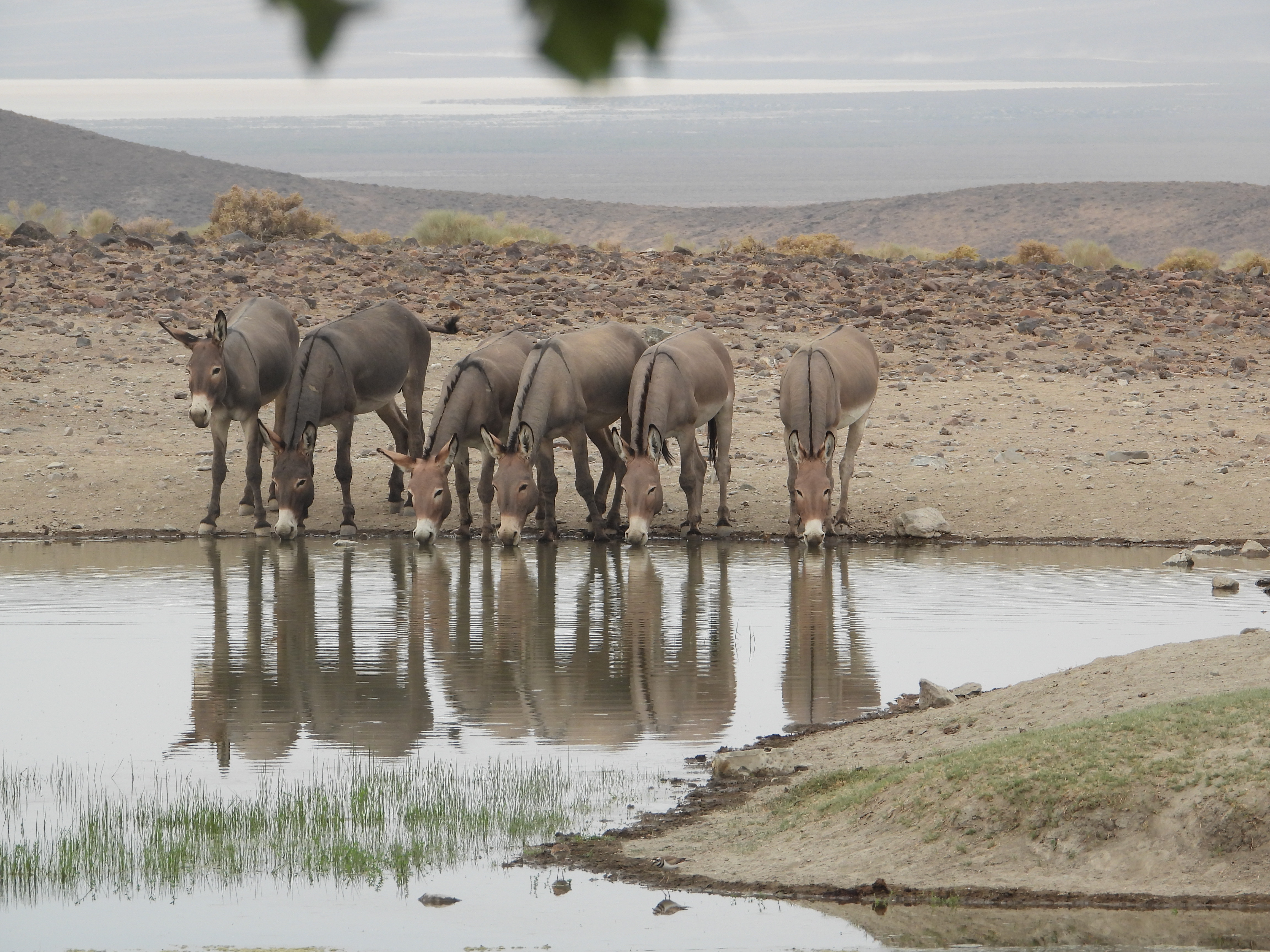 On August 1, 2022, the Bureau of Land Management (BLM) Humboldt River Field Office will begin a roundup and removal of the wild horses and burros from the Blue Wing Complex in Nevada. The complex has five Herd Management Areas and four Herd Areas which encompass over 2,283,000 acres and the BLM has set the Appropriate Management Level (AML) of a mere 333-553 wild horses and 55- 90 wild burros! The helicopter contractor is Warner Livestock.

August 12, 2022: 66 horses were captured today. This concluded the operation.

We arrived at our new observation at around 6:15 am. The observation area was a big improvement from the last two days, we could see both wings and the trap site. I’d say we were approximately 0.6 miles away.

I overheard the radio and it sounded like they could see about 30 horses from where the trap site was set up.

At 8:14 we spotted the big group coming into the valley head-on. When they got into the wings they broke off into two big groups and got scattered. As the large group came closer to the trap site I spotted 4 horses that had turned back around out of the wings making an attempt to escape. They were running up the hill closer towards us and when the helicopter successfully had the big group enter the trap site he turned back around to get the remaining 4. He pushed them over the ridge and down again towards the road and at 8:24 all horses were in the trap site.

It was hard to tell but I think I spotted just a couple of foals with this group. Conditions at the trap site were fairly quiet and I didn’t see any visible injuries.

At 8:50 I watched the first trailer load go out with horses calling for each other. At 9:18 we spotted the helicopter with another 15-17 horses. There were about 2 foals and one chestnut horse that was unusually large for this HMA. The helicopter managed to get them into the trap site very quickly.

At 9:32 another trailer load went by and we were notified we could leave observation. I asked multiple times if we could wait for a trailer load to go by so I could get a close-up view of the horses since we were headed in the same direction. Unfortunately, they wanted us to leave before the remaining trailers did. I asked again as we got closer to C Punch Ranch (where temporary holding is) but we then drove well past the intersection where the trailers took a left and I was unable to get pictures.

The roundup ended today as they reached their remaining numbers. Today started with blue skies and a low of 66 degrees and a high of 91 F. We arrived at the same trap site as yesterday around 6 am and I assumed the helicopter was already in the air since we didn’t see him take off.

At 8:32 we spotted a very colorful band of 13 horses. They were mostly trotting their way to the trap site with the helicopter giving them plenty of space. By 8:45 am they were all in the trap site.

At 12:22 pm we spotted the helicopter with 10 horses going about the same pace as the previous group. I saw two stallions rear up but they then proceeded to move forward. By 12:45 they were all in the trap site.

The heat haze combined with the distance continued to make it extremely difficult to observe the trap site and body condition of the horses.

At 1:00 pm we were notified they were done for today and are moving the trap site.

I asked about a public road to view temporary holding but they still couldn’t give me any information on that. August 10, 2022: 61 horses were captured and three lost their lives. According to the BLM, two 4-month-old Bay fillies were euthanized due to a hernia, and an 18-year-old Bay mare was euthanized for a missing right eye.

AWHC is onsite at the Blue Wing Roundup.

We left the Conoco gas station at 5 am this morning. Around 6:20 we were set up at our observation spot which was close to a mile away from the trap site. As we arrived, the helicopter was already in the air.

At 8:50 am we got notified that the helicopter did not find any horses in the area so we moved to another trap site that was already set up. It took us about an hour to get there.

At 12:37 pm we spotted the helicopter with a group of approximately 23 horses (1 foal) coming from the northwest. They all came in at a canter and there was very little trotting but the helicopter kept a safe distance from the horses. The heat haze made it very hard to observe the condition of the horses. It also made it impossible to observe the trap site which was supposedly 1.8 miles away. At 1:00 pm all the horses were in the trap site.

They refueled and took off in the same direction.

At 3:10 pm a lone horse was pushed into the trap site and at 3:30 pm two wranglers went out to rope a foal that fell behind. It wasn't very far from the trap sites.

At 3:55 pm the roundup was called for the day. The temperature only got to about 90 degrees.

We were not permitted to see temporary holding. 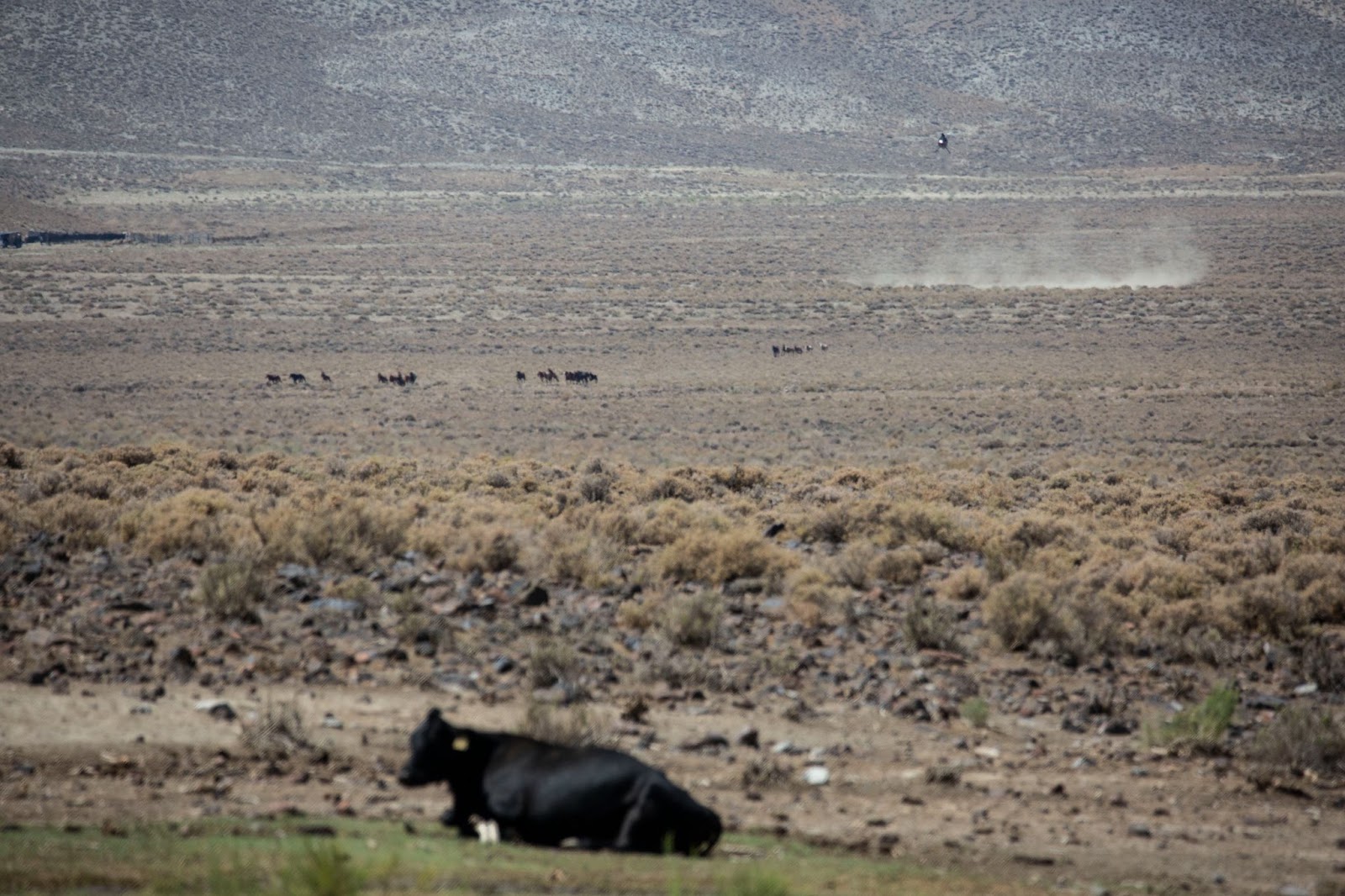 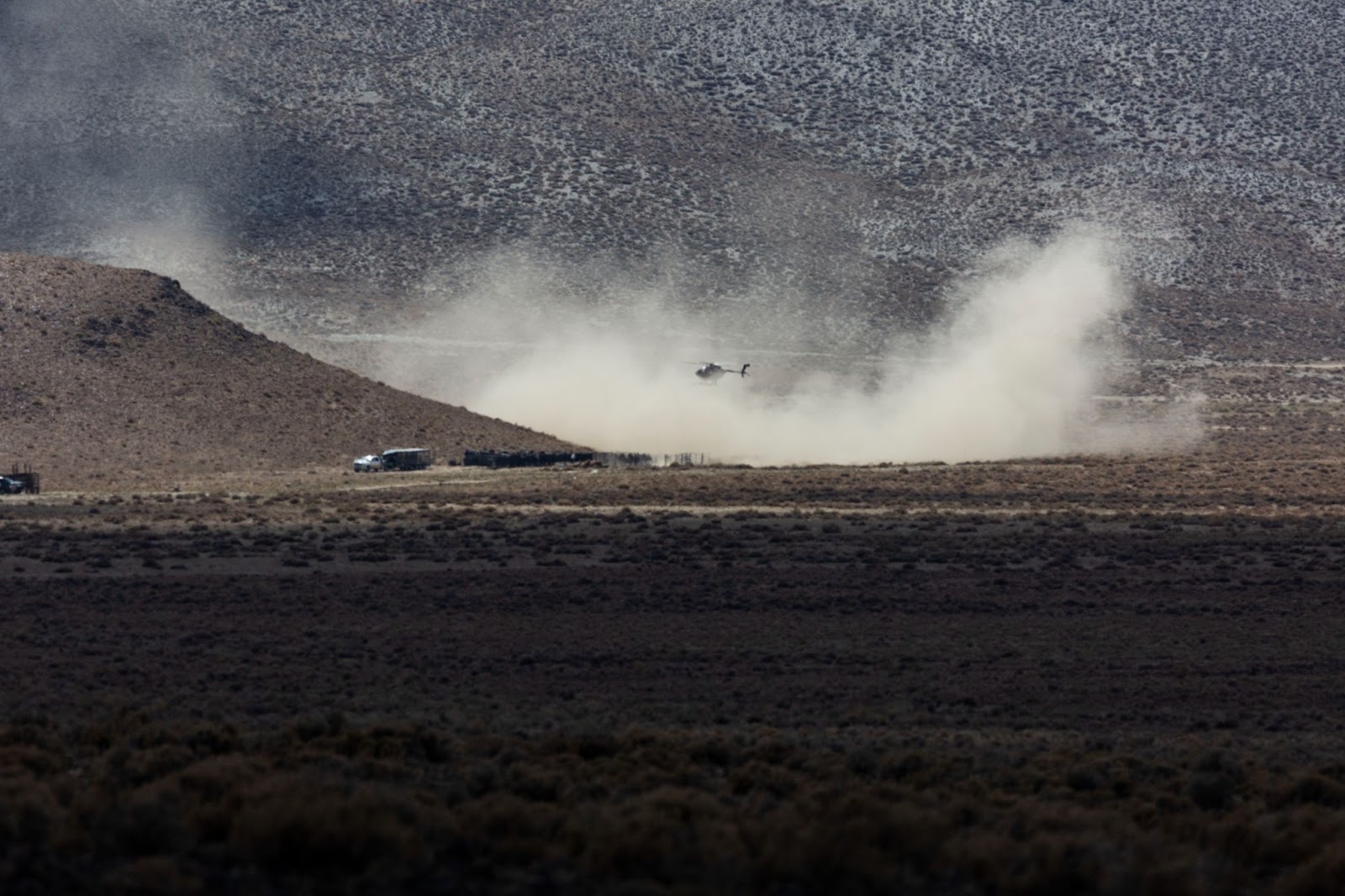 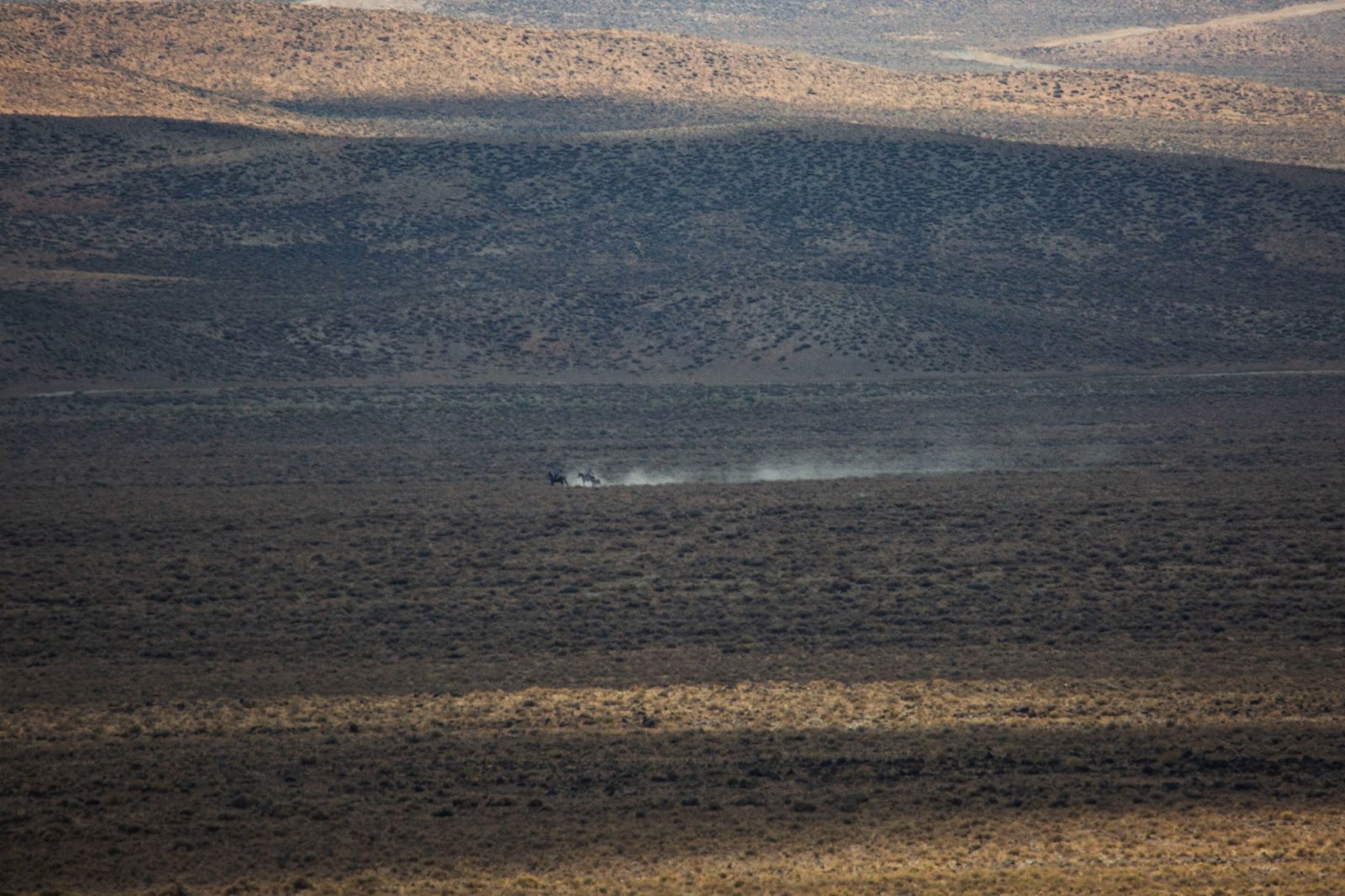 August 9, 2022: 68 horses were captured today and there was 1 death after a 2-month-old foal, according to BLM, suffered a "fractured leg when kicked by another horse"

AWHC's field representative was the only member of the public onsite today at the Blue Wing roundup. We were located approx one mile away from the trap and were able to see the opening of the wings all the way up to the trap. The only obstruction was the black snow fencing.

The day started fairly smooth, cloud cover made the heat bearable with a few sprinkles. Temps ran from around 65 to 87 degrees F. On the last run of the day over 30 horses came into the trap. They appeared confused and agitated coming up the wings. As soon as they got into the catch pen, the BLM Lead contacted the public affairs officer at observation and informed her that they were done for the day. To our Rep, it felt a little rushed as not to wait to see the horses sorted and loaded onto the trailer.

After reviewing our footage, we could see a foal coming into the trap pen and getting trampled. There are other foals that stuck closer to the sides of panels in all the confusion. We believe this is why they told us to pack up so quickly after the last run.

We were still not permitted to view temp holding. We asked the BLM for the last two days if there was a public access road next to the holding but received no reply.

August 7, 2022: 112 wild burros were captured today and there were 2 deaths: BLM euthanized a 20+-year-old jack and a 30+-year-old jack for having  "pre-existing" front right and front left leg fractures, bringing the current death toll to 8.

We met BLM at the meeting location at 5:30 am and traveled to observation site and arrived around 7:00 am. The helicopter did not come into view until approx 10:30 am and became visible around 12:00 pm and bringing them into the trap around 2:00 pm and bringing in the second set of burros from about a half mile from where they stop to get water.

The heat index made it difficult to see what condition the burros were in through the lens. This has been an ongoing issue for the last few days. The temp for the day ran between 65 and 95 degrees (however the truck temp stated it was 99 F when leaving and did not go down as I continued into town for aways).

The Visibility to monitor the condition of the Burros is a frustrating challenge. With no access to holding and zero visibility of trap due to heat haze and dust it makes it impossible to view the conditions. We were not permitted to view temporary holding.

We had to an approx 1/4 mile away from actual observation site. Viewing was still difficult as the heat haze and distance to trap made it difficult to monitor the burros coming into the trap. The temperature ranged from 60 to 95 degrees. The first sight of the helicopter was at 8:54 am when he came in to refuel. Approx 65 wild burros were caught on the first run, 75 during the second run, and 15 burros in the last run.

August 2, 2022: 130 wild burros were captured today and there were three deaths:

Observation is very challenging with smoke from nearby fires and heat haze. We were located at the same viewing area as yesterday. The trap site is at a minimum at least a mile away. They have put up black snow fence material at the panel where they load into the truck making it impossible to witness the loading area.

The weather was a mild 64 to 94 degrees.  The operation appeared to go smoothly with the helicopter not pushing the burros at a high rate but rather allowing them to take their own pace. In the second and final run of the day he brought in quite a large group. With the smoke haze, it made it difficult to see however getting closer to bringing them into the trap area some split off scattering in a few directions.

Right after the first run wranglers went out after burro that missed going into the trap. It took nearly minutes to get the burro into the trap fighting wranglers near the trap area. There were three total that the wranglers had to bring in by rope on horseback.

August 1, 2022: Approximately 174 wild burros were captured today and there was 1 death after a 17-year-old grey Jenny died after suffering a broken neck. The contractors pulled the trailer next to the pens. When asked we were told that they were taking a break to do "something" with the trap area. We were never informed until the BLM report was provided that a jenny had broken her neck.

Our field observer met the BLM at 4:30 am to caravan to the trap site. We drove approx 33 miles west to the observation site arriving around 6:30 am, which was not visible to the naked eye. The helicopter was in the air at around 6:55 am.

By 1:30 pm the helicopter was in the air again and by 2:30 another 25-30 burros were brought in. At 2:40 the operation was called for the day. The helicopter appeared to stay back at a safe distance while pushing the animals. The temperature ranged from  64 to 94 degrees.