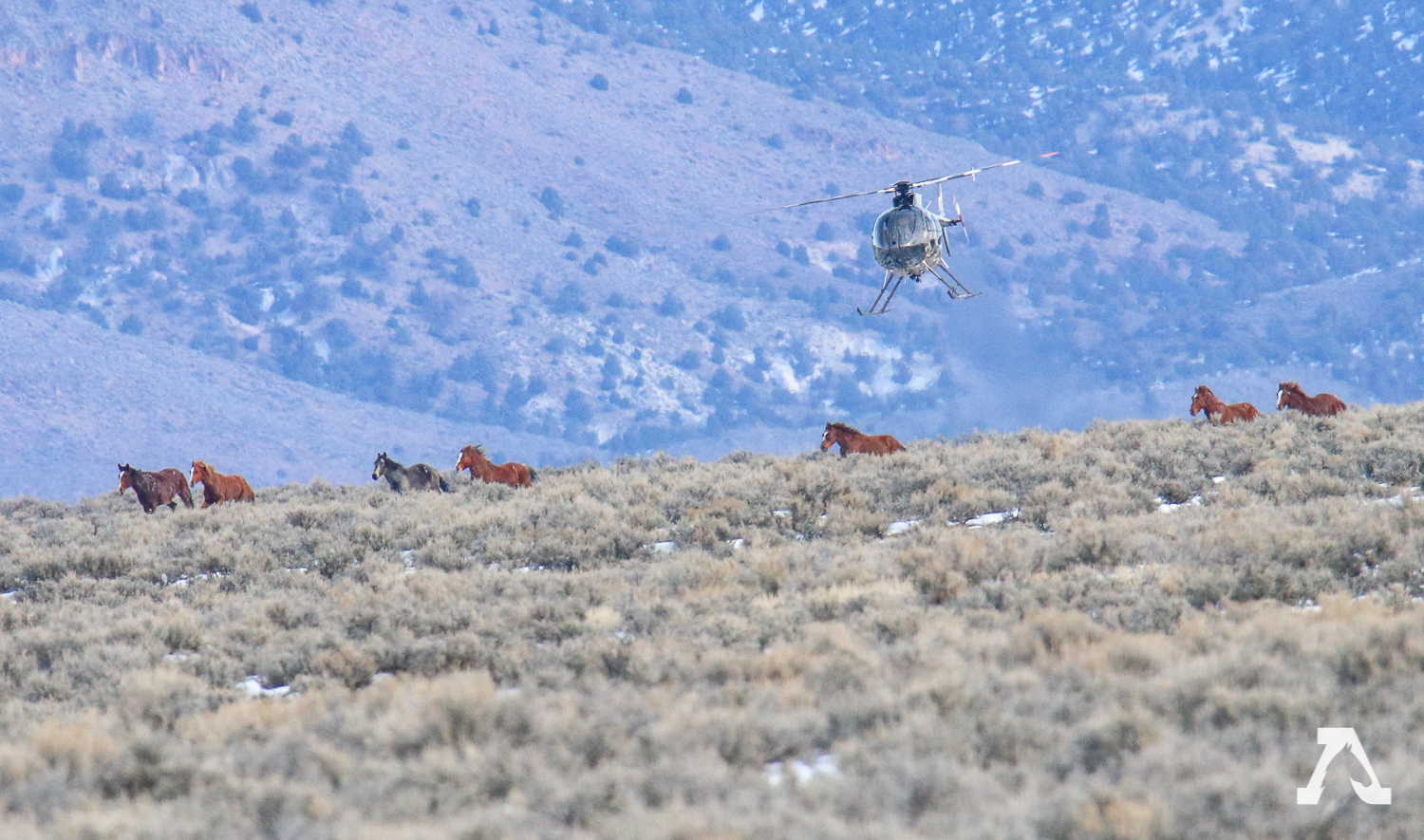 Roundup Report: The Wild Horses of the Desatoya HMA

Roundup Report: The Wild Horses of the Desatoya HMA

The Desatoya Herd Management Area (HMA) encompasses approximately 161,700 acres in Nevada. The Bureau of Land Management (BLM) currently estimates that, as of March 2021, approximately 277 wild horses call the HMA home. However, the BLM’s unscientifically low Appropriate Management Level (AML) for the HMA – the number of horses the agency claims that the range can sustainably support in conjunction with other animals and resource uses – is 127-180 horses.

Even while the helicopters fly, removing our federally protected wild horses, the BLM continues to authorize thousands of cows to graze in four allotments that overlap with the HMA. It is time for the BLM to manage wild horse habitat for the wild horses.

This roundup will cost the taxpayers at least $178,305 to roundup 223 beloved horses from the HMA. Of that, only approximately 73, 43 mares (treated with experimental GonaCon fertility control) and 30 stallions are planned for return to the HMA, so the removal will also bring along with it the lifetime cost of approximately $10.7 million to house the remaining 150 horses for the remainder of their lives in government holding corrals. The contractor for this roundup is xx.

On top of that, the taxpayer foots the bill for federally-subsidized livestock grazing on public lands as well. The federal grazing fee remains at its historic low of $1.35 per animal per month. That’s a steep discount, thanks to the taxpayer subsidies that prop up this federal entitlement program. (Estimates indicate that the overall cost to taxpayers for the federal grazing program could be as much as $500 million annually.

Helicopters are scheduled to fly starting on January 16, 2022. We will update this report as the operation progresses.

January 25, 2022: Six wild horses were captured today and there were no deaths.

January 24, 2022: 25 wild horses were captured and there was 1 death after the BLM euthanized a 3 year old bay stallion due to a "pre-existing condition (severe lameness in all four legs)".

January 23, 2022: 8 wild horses were captured today and there were no noted deaths or injuries.

AWHC's field representative was the only member of the public onsite and was located approximately 3/4 mile away from the trap.

Even after the rancher and his dogs had moved most of the cattle from the flight path, a few cows remained in the area as the horses got pushed to the trap.

We still have had NO access to Temp holding on private land.

AWHC's field representative was the only member of the public onsite today and was placed 3/4 mile away from the trap. He watched 2 horses be pushed past cattle along a fence line covered with jute. He was not permitted to view temporary holding because it was located on private land.

January 21, 2022: 8 wild horses were captured and there were no deaths reported.

January 20, 2022: 40 wild horses were rounded up and removed from the HMA today and a 30+-year-old bay stallion was euthanized for having a clubbed foot.

January 19, 2022: 6 horses were captured today and 2 stallions, each blind in one eye with good body condition, characteristics and confirmation, were released back into the HMA.

Today, AWHC’s field representative was the only member of the public at the roundup for observation.  The trap was placed about a mile away and visibility was poor. After 3 days, he still had no access to Temp holding as it is on private land.

“I watched a beautiful band of 12 being pushed across the horizon, I was excited to see it included several pintos,” he said of the horses captured. 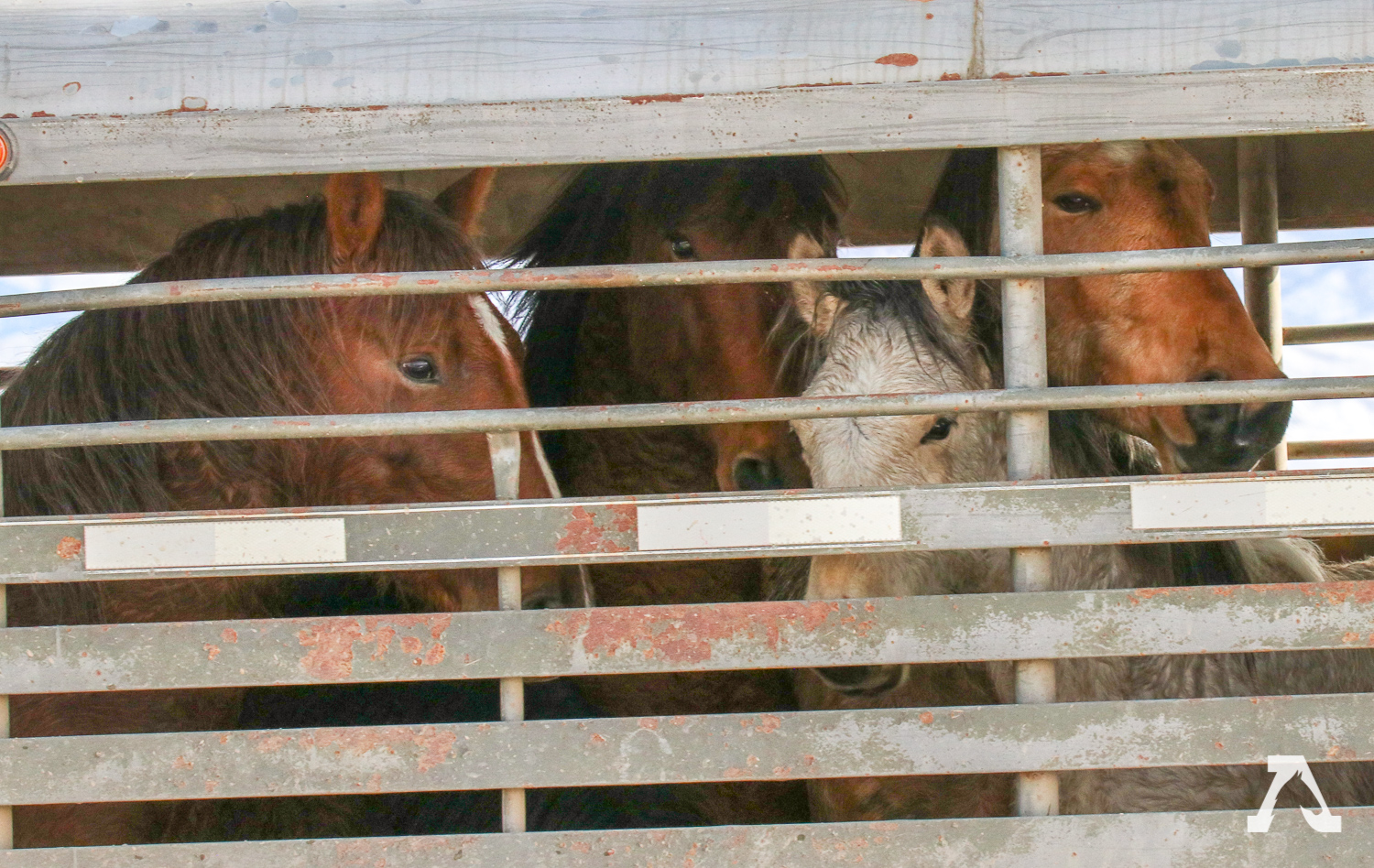 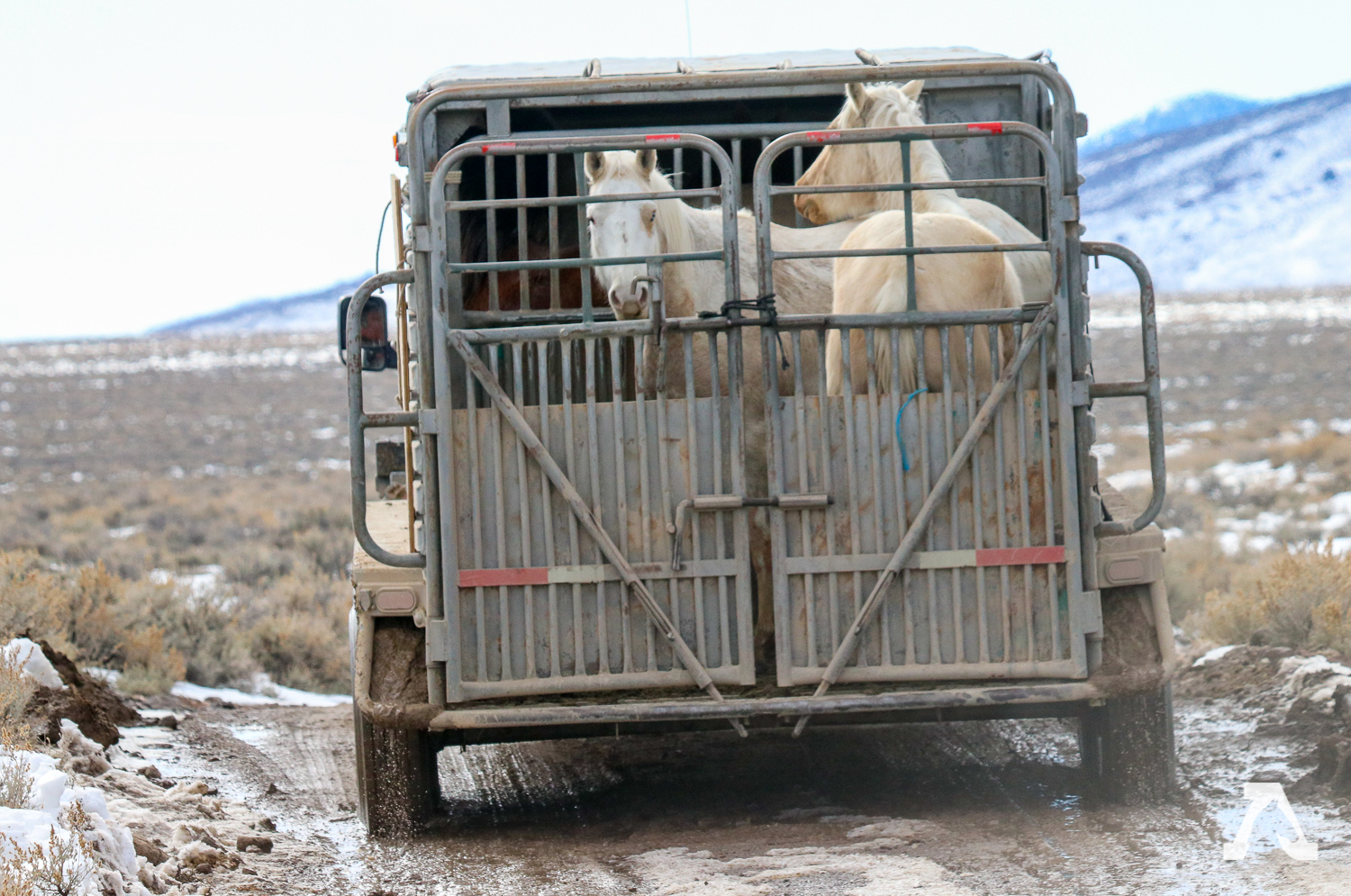 On the second day of the Desatoya roundup, 29 horses were captured. We couldn’t see much of the trap it was placed a mile away. We were not able to go to temp holding since it was placed on private land. 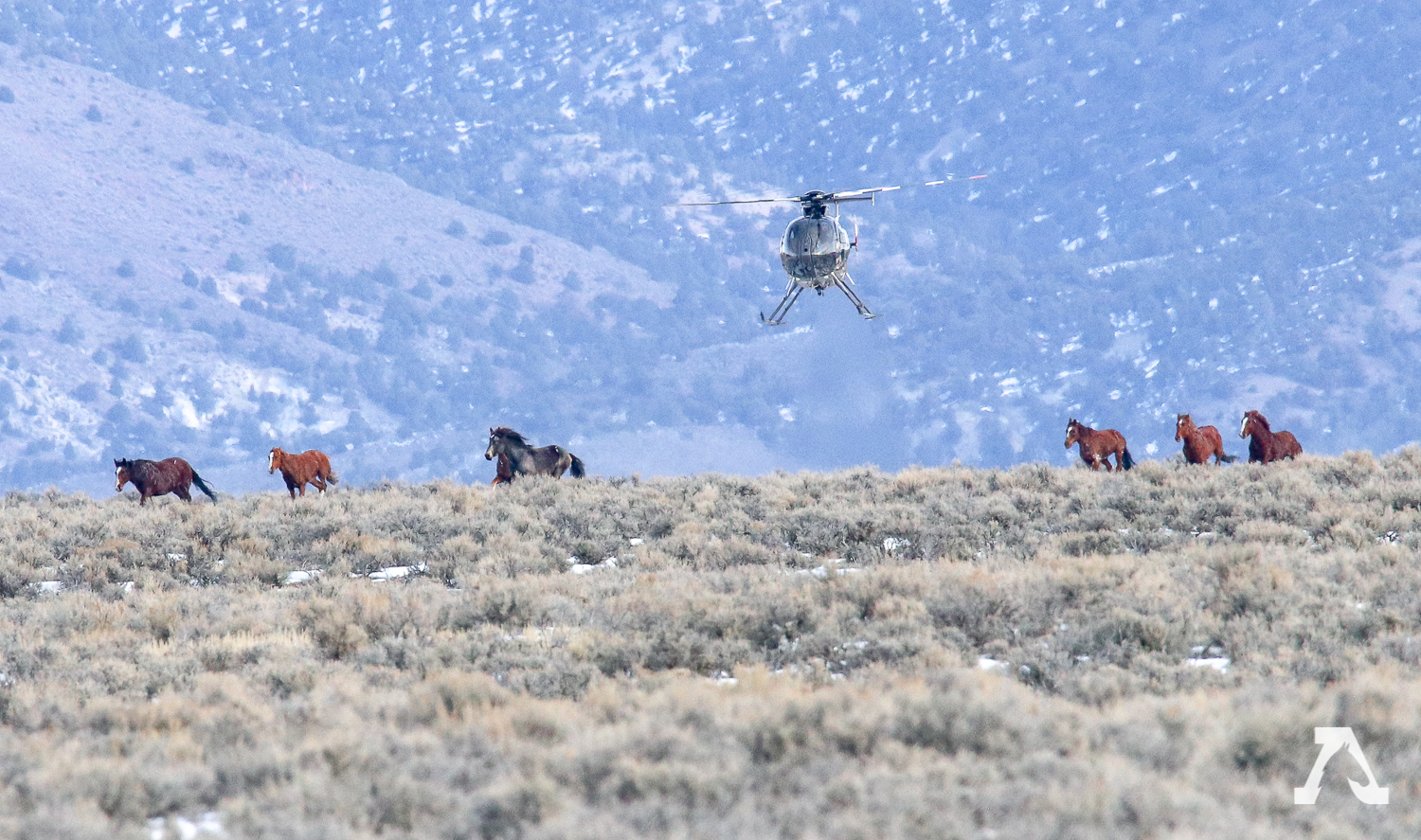 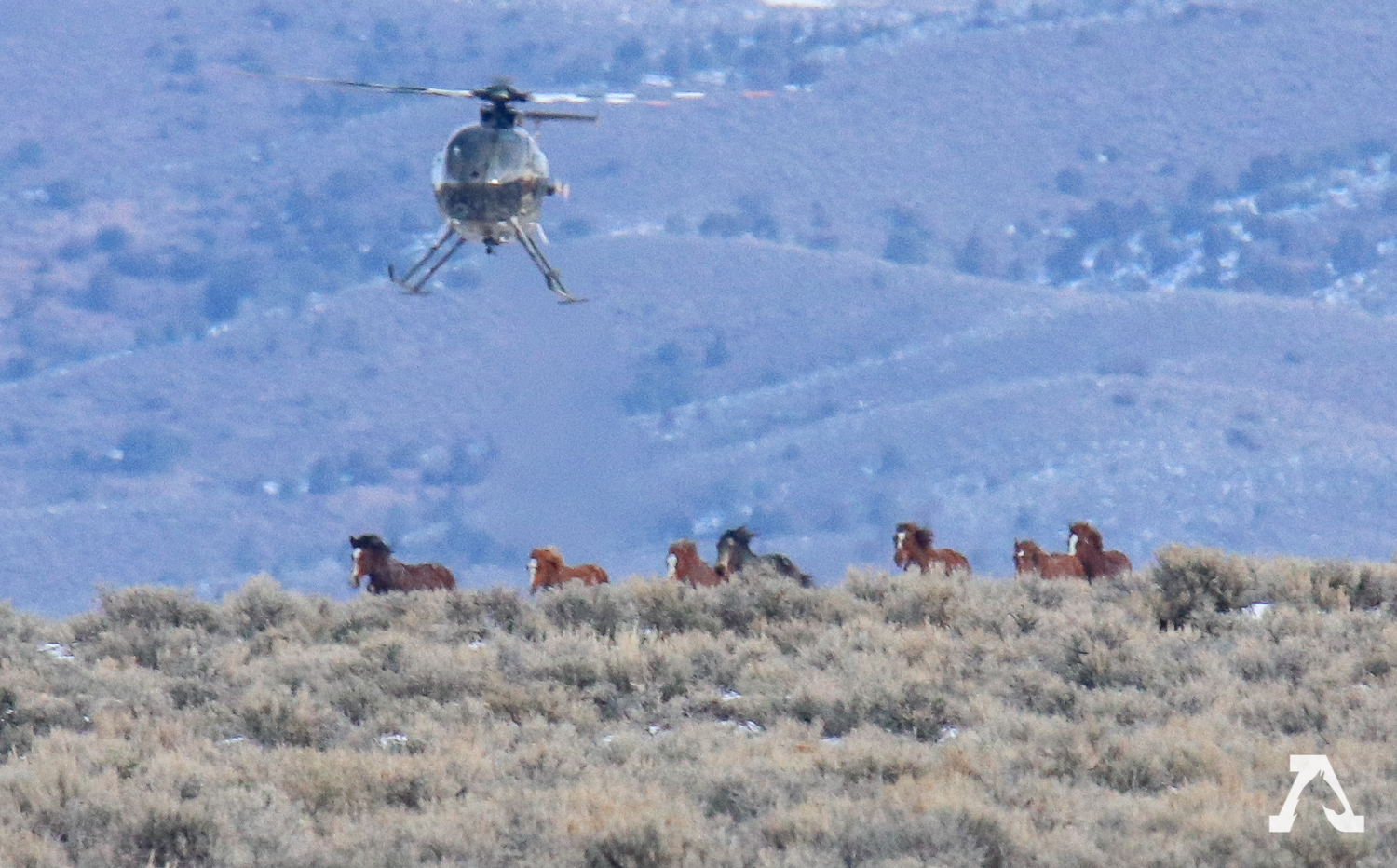 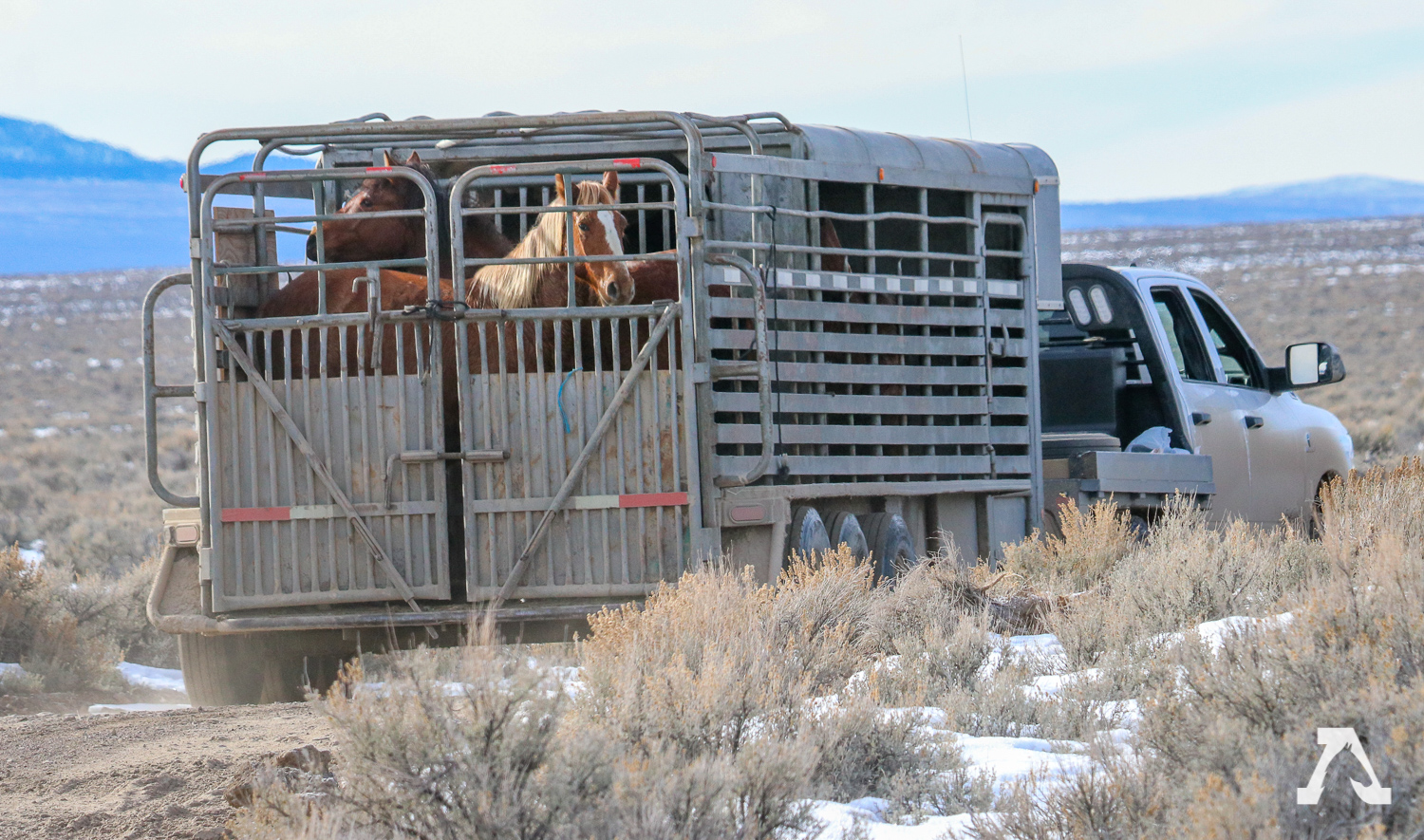 January 16, 2022: Today 24 horses were captured. We couldn’t see much of the trap and were not able to attend to temporary holding as it was placed on private land. 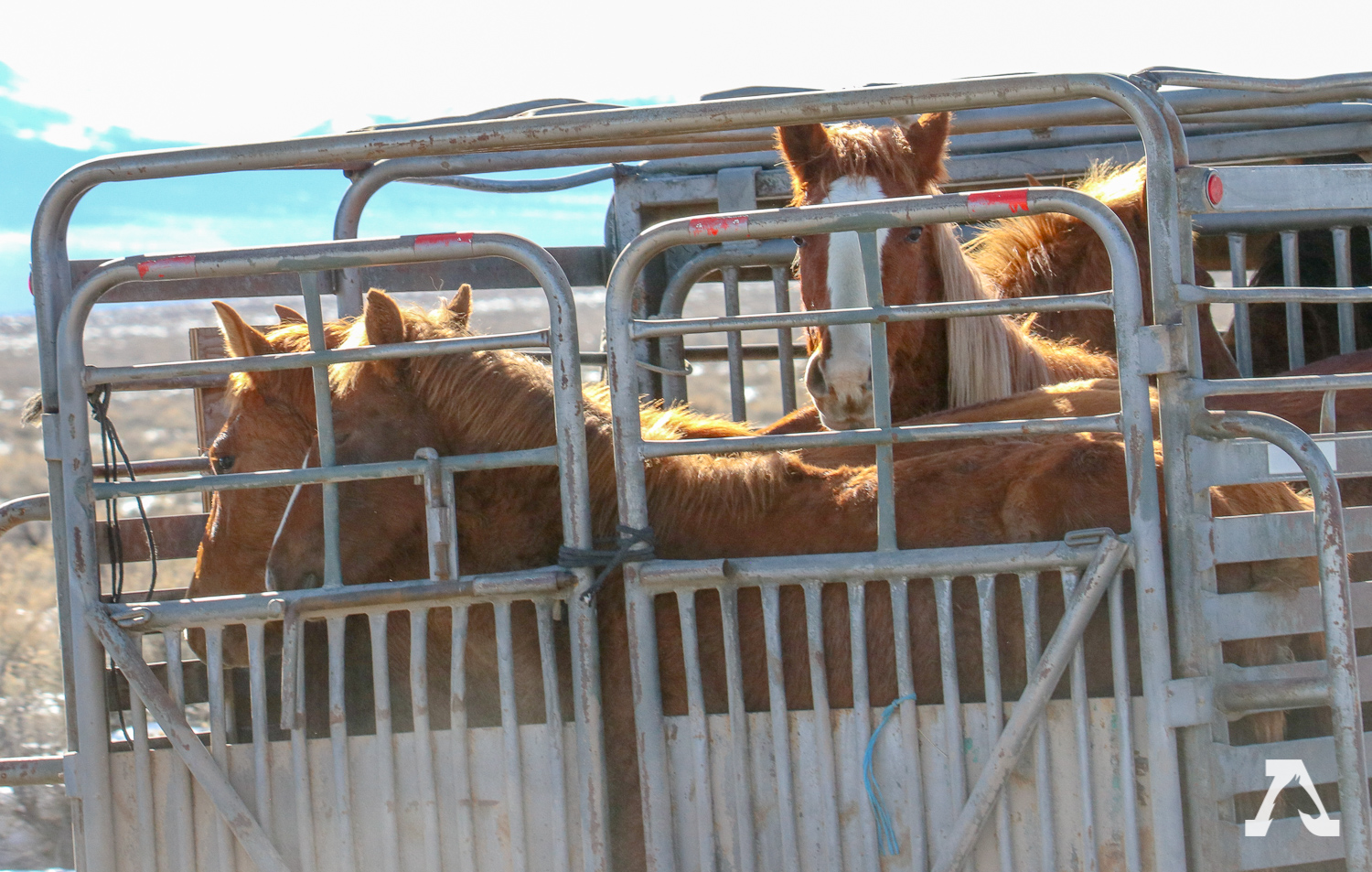 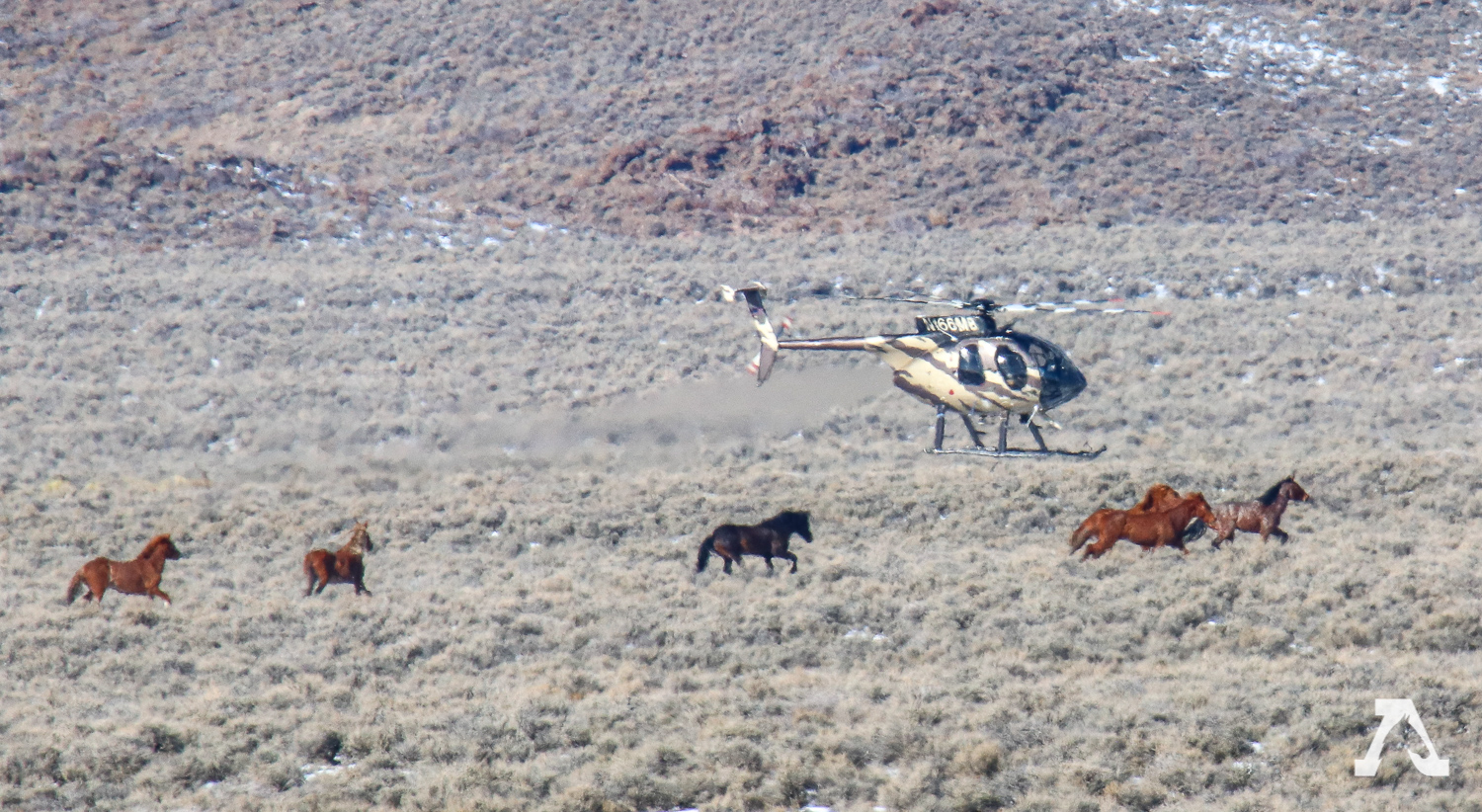 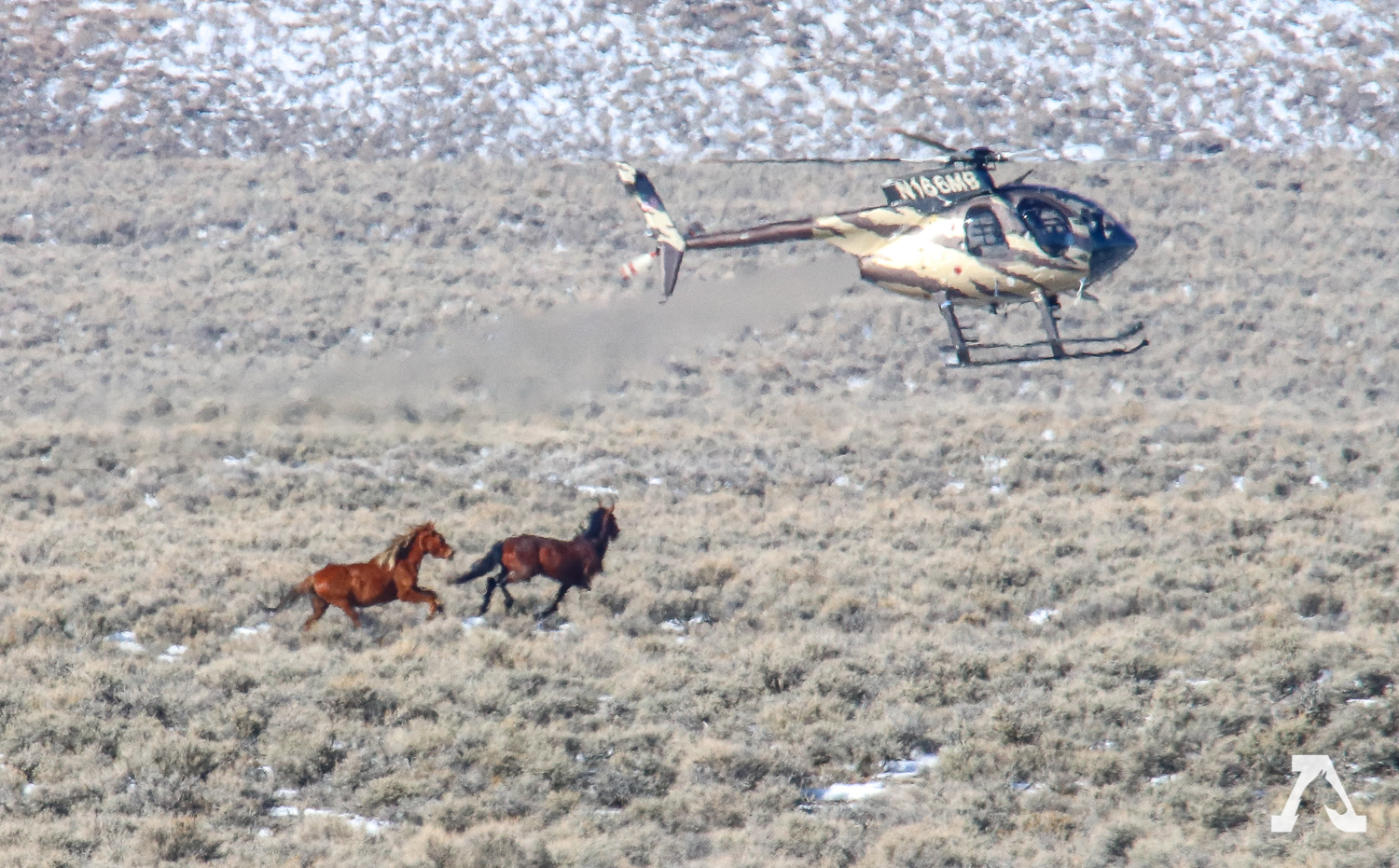 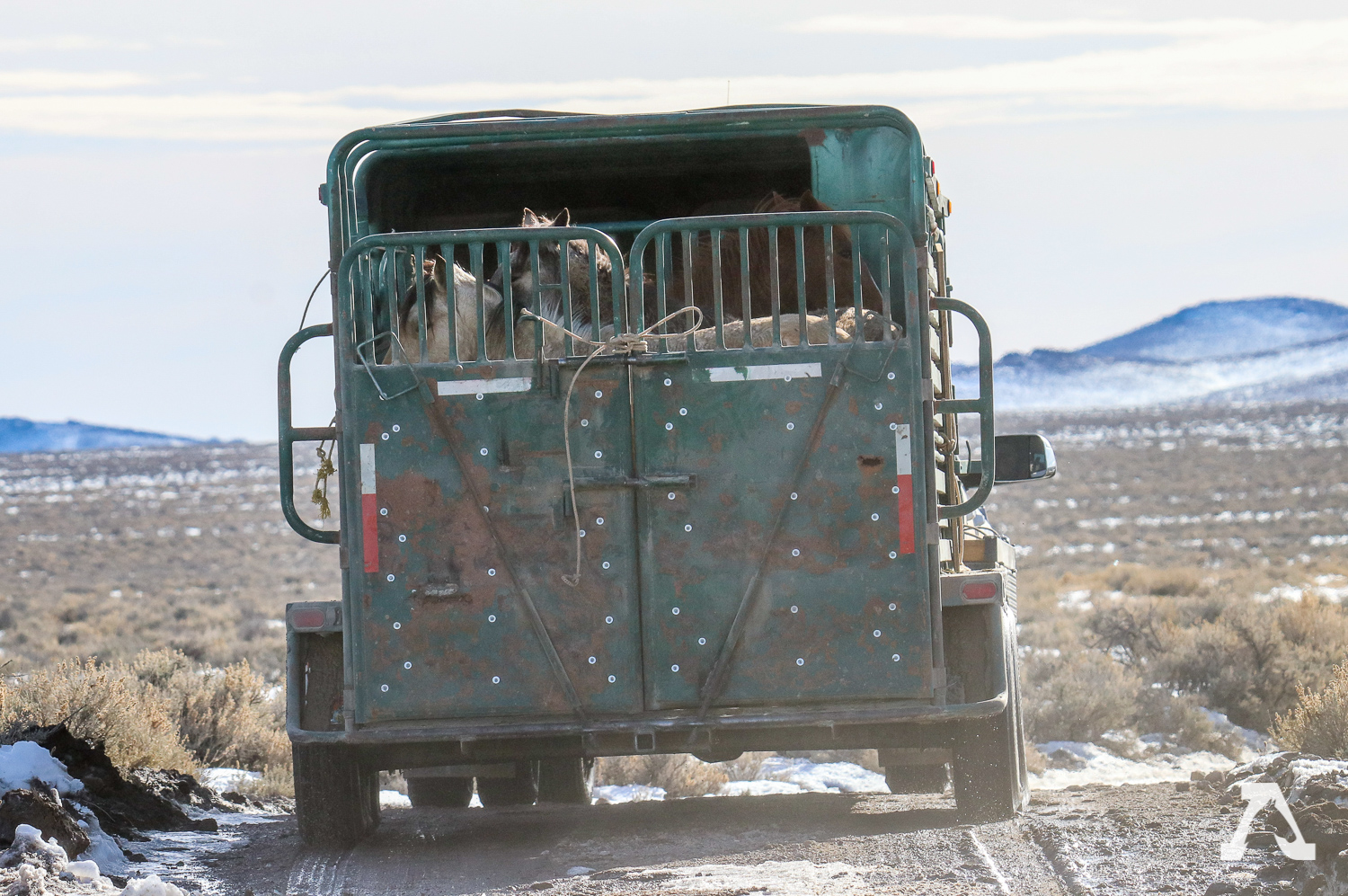