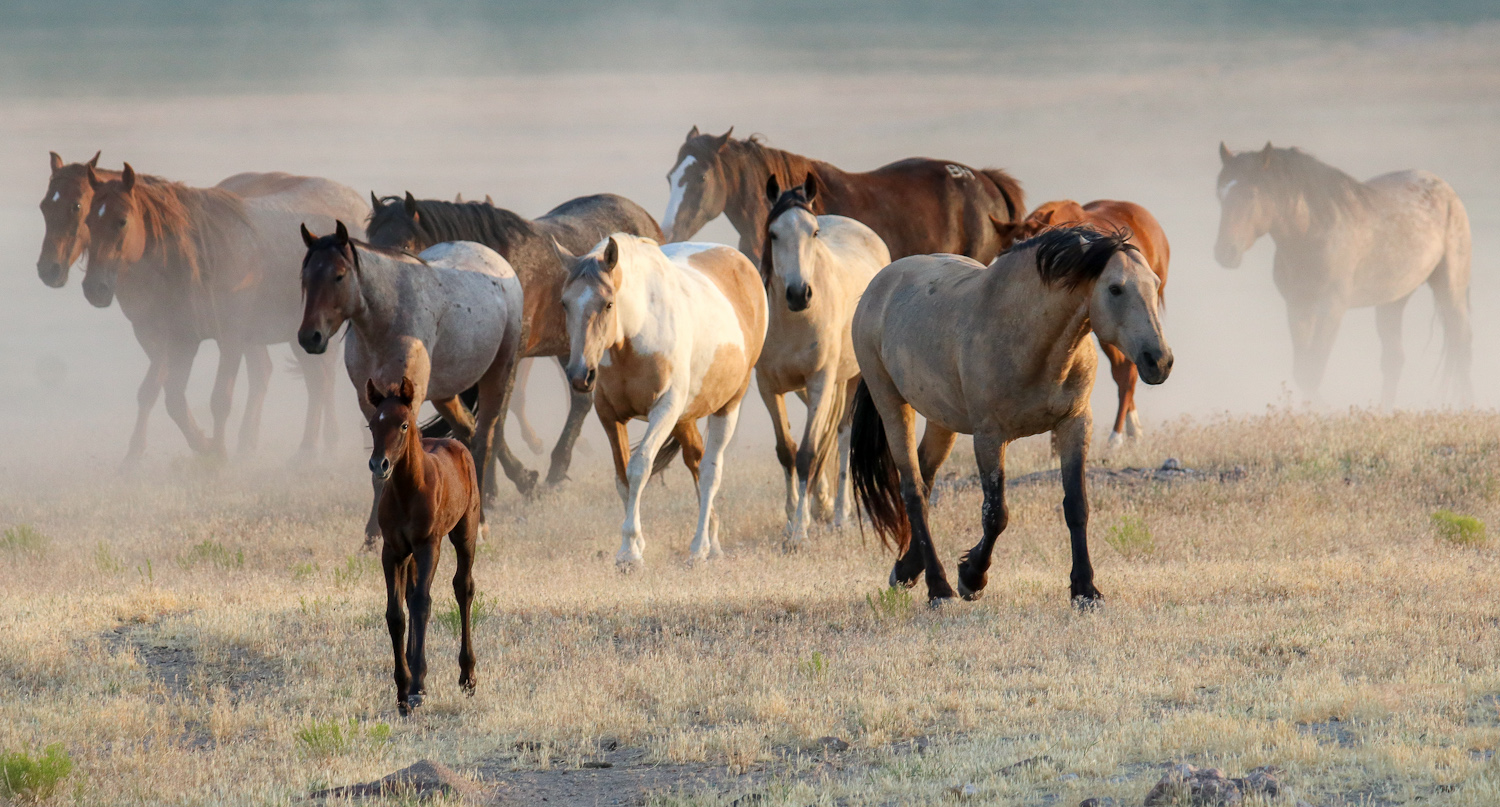 SALT LAKE CITY — A successful, intense program in Nevada involving wild horses could help refine the science of fertility control in additional wild horse populations as well other species like elephants in Africa.

The American Wild Horse Campaign, because of its extensive data set on more than 3,000 wild horses in the Virginia Range, will be working next year with a researcher from the University of Pretoria to develop additional science around the administration of a fertility control drug called porcine zona pellucida or PZP.

“We are really excited to begin working with the university,” Suzanne Roy, the campaign’s executive director, said. “There are a number of elephant preserves that use PZP to manage elephants in limited habitats.”

In the campaign’s program, trained volunteers go out in teams, stalking wild horse bands across a range that spans 300,000 acres in the greater Reno area of Nevada.

Using an extensive database documenting each of the horses’ colors, distinctive markings, gender, family affiliations and more, a spotter pulls up a mare’s fertility control vaccine history to determine whether she needs a dose.

If so, another volunteer — usually from a distance of 25 yards — shoots the dart into the hip of the mare to prevent a pregnancy. The mares are given a “primer” and then a booster within 12 months, followed by more boosters in subsequent years.

The American Wild Horse Campaign, in an agreement the nonprofit advocacy group reached with the Nevada Department of Agriculture, has treated 1,333 mares and administered 3,075 treatments since it began this program on April 9, 2019, for a population of 3,000 horses occupying state and private land.

The vaccination effort impacting so many wild mares makes the campaign’s program the largest of its kind in the world, according to the Science and Conservation Center in Billings, Montana.

A skeptic at Nevada’s agriculture department told Roy in 2019 that the program to slow population growth among the Virginia Range horses would likely fail, yet she was not deterred, nor were her volunteers — a force that has steadily grown.

“We are getting close to getting most of the mares out there, which is really important in this population of wild horses which is losing habitat due to rapid development. ... Their habitat is shrinking dramatically.”

The intersection of old West and new tech

About a third of the horses occupy an area that hosts the Tahoe Reno Industrial Center, the largest industrial park in the world that is home to the Tesla Gigafactory 1, Google, Switch and Blockchains.

The tech community is intertwined with an iconic symbol of the American West, but the new highways, traffic and urbanization of the area combine to threaten the animals.

As part of the effort to minimize the risks, Blockchains — the major landowner with 70,000 acres — has worked with the campaign to put in alternative water sources that will lure the horses to the hills to escape the developed areas.

Rather than viewing the horses as a nuisance, Roy said the industrial center uses them to recruit companies and their employees.

Kris Thompson, project manager for the industrial center, said there are about 150 companies that make up the complex.

“The fact that we have these horses roaming free in the park is a great brand. It reinforces that this is the West. It is not three-piece suits, bureaucracy and red tape. We know this is special. When Tesla bought a 3,000 acre-site for Gigafactory 1, there was a phrase that went global on the internet services,” Thompson said.

That phrase defining the park?

“It is really emblematic of who we are,” he said. “There’s nothing like it in the world.”

After Tesla secured the deal for the property, Elon Musk posted on social media a video that showed the wild horses roaming a ridge, Thompson said, adding that it received 750,000 hits in a span of 60 days.

Thompson said tech company executives show up at wild horse conferences to get briefings on the horses, the fertility program and to meet one on one with the campaign.

“We sure appreciate the work of those volunteers. We are their biggest fans. They are tireless.”

The campaign’s cornerstone is that stable of trained volunteers, said Deb Walker, coordinator of the Virginia Range Fertility Control Program.

“They are the ones moving the program forward. It is the volunteers who know their regions and know their little areas and are getting the job done,” she said. “They are committed. I can’t say enough about them. These guys are super human.”

The darters, trained on pistols and rifles, come from a variety of backgrounds, including one who worked in interior design and as a former police officer.

While in the field, volunteers extensively document each finite detail about the horses — from the location of scars or even if it has a swirl on its body, which is akin to a human cowlick. The horses also can turn a different color, depending on what time of year it is, with winter coats taking on a different shade.

For that reason, Walker said the database includes multiple photos of each horse so volunteers can correctly identify them to determine if any of the mares are in need of a vaccine, which is 97% effective.

Stallions are catalogued as well in the database as a way to identify social relationships and how those evolve in 15 distinct areas of the range.

While the 2021 foal crop will ultimately tell the story of the program’s success, Roy figures the campaign’s fertility control program will result in the prevention of 600 births in the coming year.

“The results of our program are applicable to other herds,” she said. “Basically, you have to invest some time in learning about the horses, the area you are going to dart, where the water sources are, where they are likely to be found and then go out and dart them.”

The program’s success in Nevada helped convince a bipartisan group of congressional representatives to offer an amendment to fiscal year 2022 appropriations legislation to require the Bureau of Land Management to spend approximately 10% of its annual Wild Horse and Burro Program budget on fertility control implementation using the vaccine.

“It takes time, but when you consider the costs of helicopters (used in roundups) and the cost of warehousing the horses, it is a no-brainer,” Roy contends. “You can do this for a fraction of the cost.”

The amendment was not included, but the final spending bill did include advisory language calling on BLM to include a “robust” expansion of fertility control through methods that are safe, effective and humane.