January 9, 2019... Residents of Palomino Valley, Nevada are up in arms and heartbroken after days of illegal horse roundups which began last weekend by the Pyramid Lake Paiute tribe. Hundreds of locally- cherished horses were captured from private lands in this rural community on the outskirts of the Reno/Sparks area. Several privately-owned horses were captured in the operation. The horses are being sold directly to a kill buyer for shipment to slaughter in Mexico. Even worse, the roundup is continuing on reservation lands, with hundreds more horses targeted for removal. 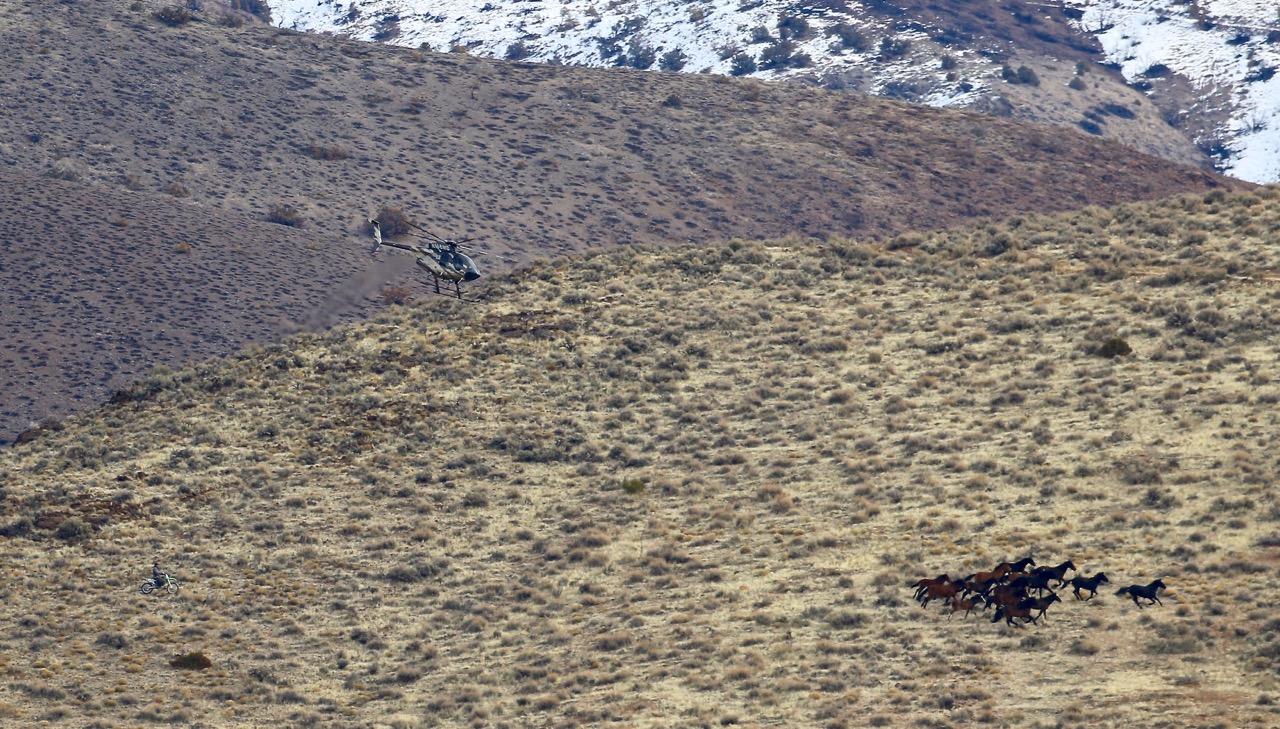 To date, the Nevada Department of Agriculture and the Washoe County Sheriff’s department have not taken action to stop the roundup or assist residents in addressing criminal trespass issues and retrieving their stolen horses.

According to eyewitness Maureen Daane, while most of the horses are of tribal origin; many have lived in the Valley for several years and are individually known and named by local residents. Daanne states, “Beloved horses have been brutalized. Laws have been blatantly broken. People’s animals have been taken. Our law enforcement agencies are allowing this to happen. Something must be done immediately to stop this.”

On Friday (1/4) and Saturday (1/5), members of the tribe and employees of Cattoor Livestock Roundups hired by the tribe, chased horses by helicopter, ATV, motorcycle and with wranglers on horseback from private and public land onto reservation land.

The horses were driven into a trap and immediately loaded onto trucks without separating mares, stallions and foals – a dangerous situation that will result in injuries from trampling, stallions fighting, etc. Entire bands were taken, and horses – including pregnant mares and young foals – were driven up to 15 or more miles. One foal who couldn't keep up in the stampede was left abandoned and had to be rescued. (He’s now in good hands).

The captured horses were held on the reservation legally required brand inspections from the Nevada Department of Agriculture before shipment to slaughter. It is unclear as of today whether horses have actually shipped from the reservation to the Mexican border for slaughter

A number of privately-owned horses were caught up in the roundup. Among them: Lady Thor (below), a sweet bay mare, and Gentle Warrior, his mare and their foal.

In addition to criminal trespass and horse theft, the roundup violates Nevada state law relating to estray livestock. Since most of the horses captured were of tribal origin but were unbranded with no physical signs of domestication and at large on private and public lands off the reservation, they legally are classified as “feral/estray” livestock, and cannot be rounded up without prior public notice. (NRS 569.045). The requirement is specifically in place to protect property owners and give citizens a mechanism to reclaim their animals if they are captured in a “gather” of estray livestock.

What You Can Do!

1. Request that the State put an immediate hold on the shipment of all horses captured in Palomino Valley while allegations of trespass, theft and violations of state law are investigated.

Please call the following state officials and POLITELY AND RESPECTFULLY ask for their assistance in finding Lady Thor and returning her to her owner. Ask the state to put an immediate hold on the roundup and shipment of Palomino Valley horses until a thorough investigation has taken place.

2. Donate to our legal fund.

We have retained a respected Nevada attorney to assist residents and address violations of law that occurred with this roundup so they do not occur again. But we need your help to sustain this effort!