Over 20 participants, including AWHC's Deniz Bolbol and Mary A. Koncel, AWHC's coalition partner Virginia Range Wildlife Protection Association’s Nancy Kilian, wild horse advocates, a Modoc County advisor, a permitee, a representative from the Modoc County Commission, and USFS personnel took part in the day-long event that included six stops just outside of the western boundary of the WHT. 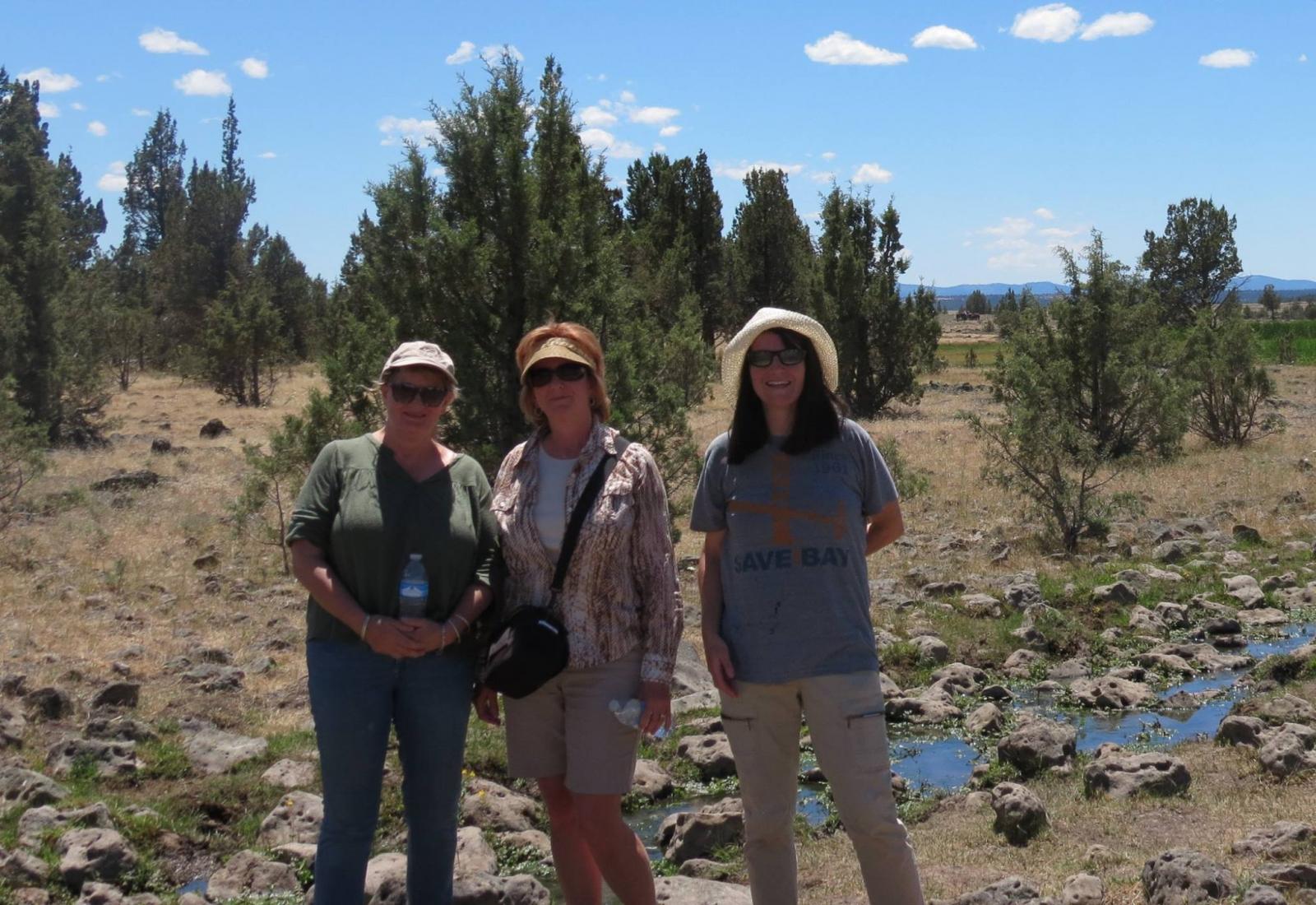 The Devil’s Garden WHT is located in Northern California approximately five miles north of Alturas. It consists of 308,000 acres (or nearly 500 square miles) of USFS and Bureau of Land Management (BLM) land.  A relatively flat, rocky lava plateau, much of the WHT is inaccessible by vehicles.

Wild horses have lived on the Devil’s Garden WHT for more than 140 years. The USFS estimates the current population is about 3,000 horses. While the agency has set an Appropriate Management Level of up to 402 wild horses on the Territory, it allows the 10 private ranchers who are permitted to graze on these public lands the annual equivalent of 2,240 cows. That means the USFS allocates 85% of the forage for livestock and only 15% for wild horses.

During the tour, we stopped at areas that were barely grazed and others, especially near water, that showed consistent use.  Midafternoon, we hiked to a stream in a section of the Territory that is frequented by wild horses as well as cattle and other species of wildlife.  Although a fence had been built in 1975 to protect this year-round source of water, it was now in disrepair. There, we were able to see between 50-70 horses from a distance – a real treat particularly after the one-mile plus trek in 90-degree temperatures. 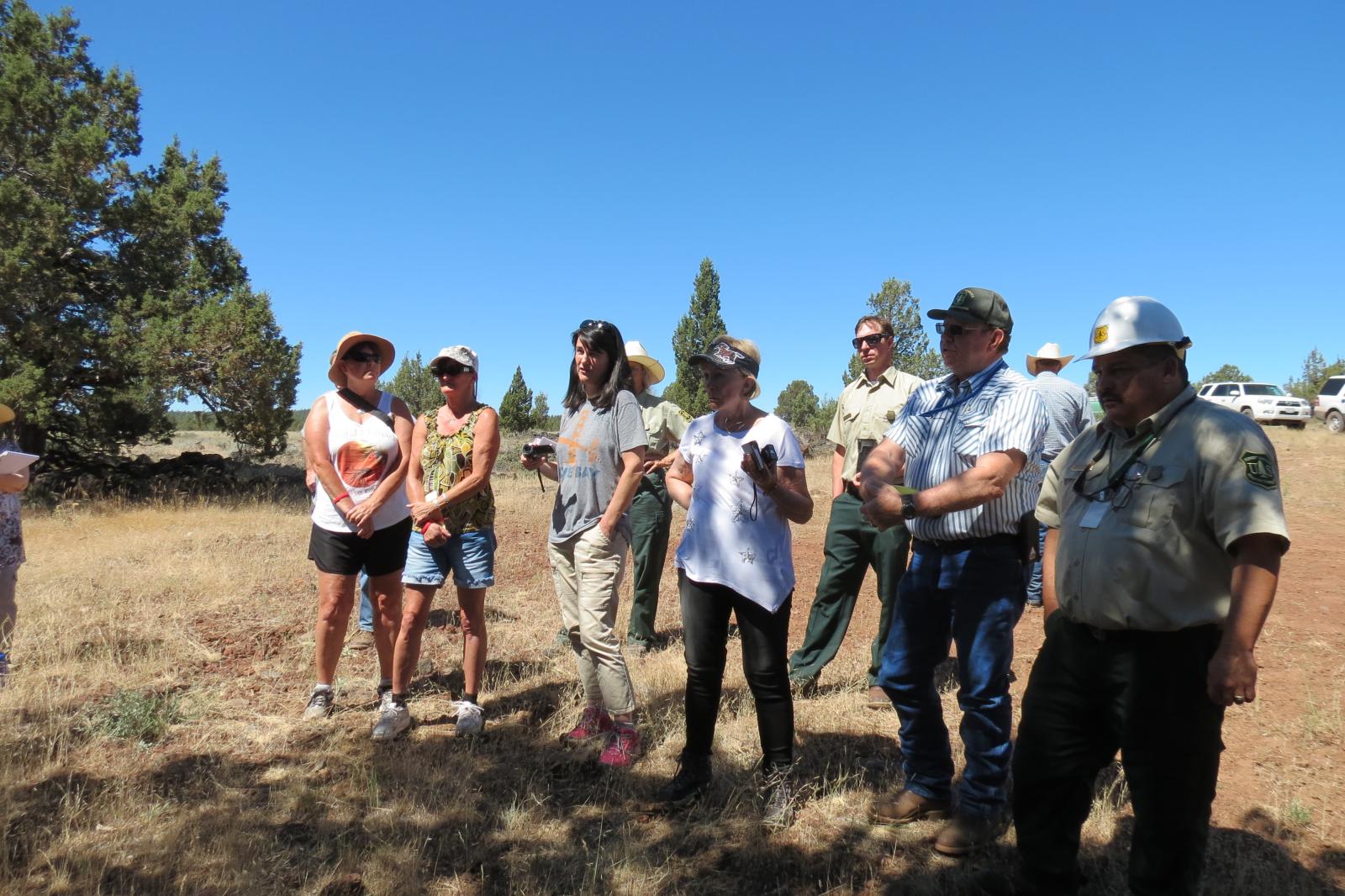 Frequently, the USFS and a few stakeholders emphasized the need to begin removing wild horses from the Territory, claiming that they were (1) damaging the ecology of the range, (2) overgrazing the forage so that little is left for the ranchers to graze their livestock, and (3) leaving the WHT and potentially getting hit on a nearby highway. As a result of this “overuse” by the wild horses, the USFS stated that some ranchers with permits in the WHT would either have reduced grazing or not be allowed to graze cattle in 2018.

(Last fall, the USFS rounded up and removed about 220 horses from the Territory.  Some of them – along with this spring’s foals – have been adopted or placed in the newly created Modoc Mustangs Trainer Program.)

However, as an alternative to future removals, AWHC is proposing a public-private partnership that would implement a humane and long-term birth control program with PZP. (See attached handout presented during the tour.)  Highlighting the value of wild horses and the need to protect them and their natural behaviors, we empathized that removals – and adoptions – are not effective in controlling their populations.  Just ask the BLM!  For the past 46 years, its failed wild horse and burro program has relied primarily on these two management tools.

While the USFS and several stakeholders were interested in our proposal, their ongoing concern was the immediate need to remove horses to restore range health and reduce their numbers.  In response, AWHC stressed that 1) the Devil’s Garden wild horse population did not grow to 3,000 “overnight” and therefore an “overnight” solution should not be expected, and 2) continued removal of the horses is not a sustainable model.  Rather, the USFS must initiate a cooperative plan in which the federal government, wild horse advocates, and permittees work together to create a unique model of a public-private partnership for the Devil’s Garden WHT.

AWHC knows this model is possible because we’re doing it through our cooperative agreement with the State of Nevada!