The Bureau of Land Management (BLM) winter roundup season is upon us. The traumatic helicopter roundups that will be conducted this season are even more concerning than usual,  since every single wild horse captured is in danger of being killed or sold for slaughter.

Signaling its intent for America's wild herds, the BLM is planning to conduct numerous roundups simultaneously. The agency's increased capacity for rounding up horses endangers more lives and  proves problematic for advocacy organizations that intend to document the mass capture of mustangs from their homes on our public lands.

Below is more information on the pending capture operations. 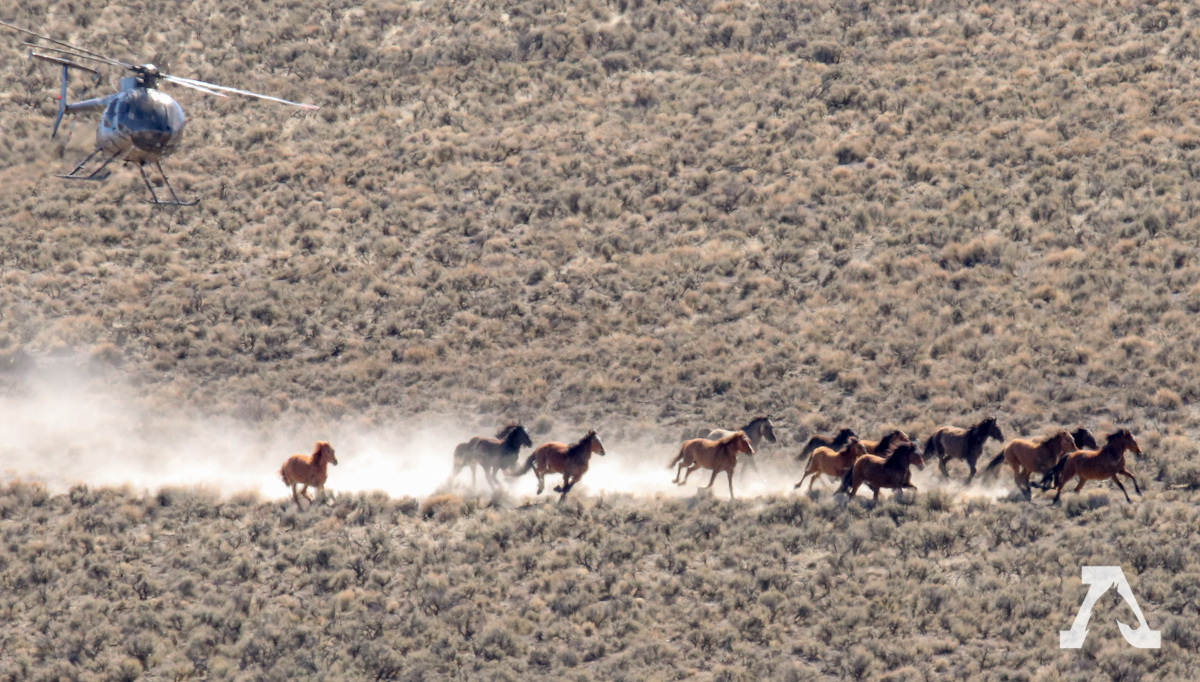 The Triple B Complex roundup has officially ended. Yesterday, there were 80 wild horses captured and there was one death. 1,388 wild horses were removed in total from the 1.2 million acre Complex and there were a staggering 28 deaths.

This month,  we filed in U.S. District court in Nevada challenging the BLM's cruel ten-year plan to round up and remove over 9,000 more federally-protected wild horses from this area. While we couldn't stop this removal,  we can impact the roundups that will take more horses from their homes on the range... and stop BLM from implementing harmful practices here in the future. 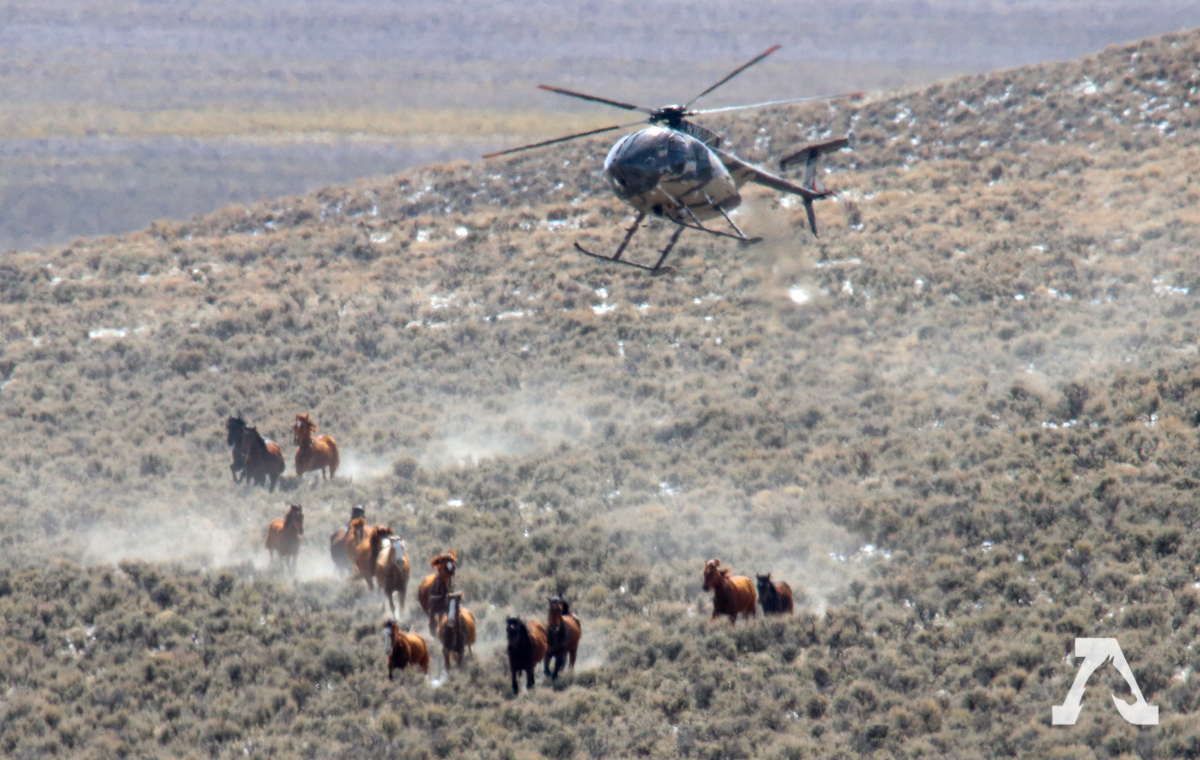 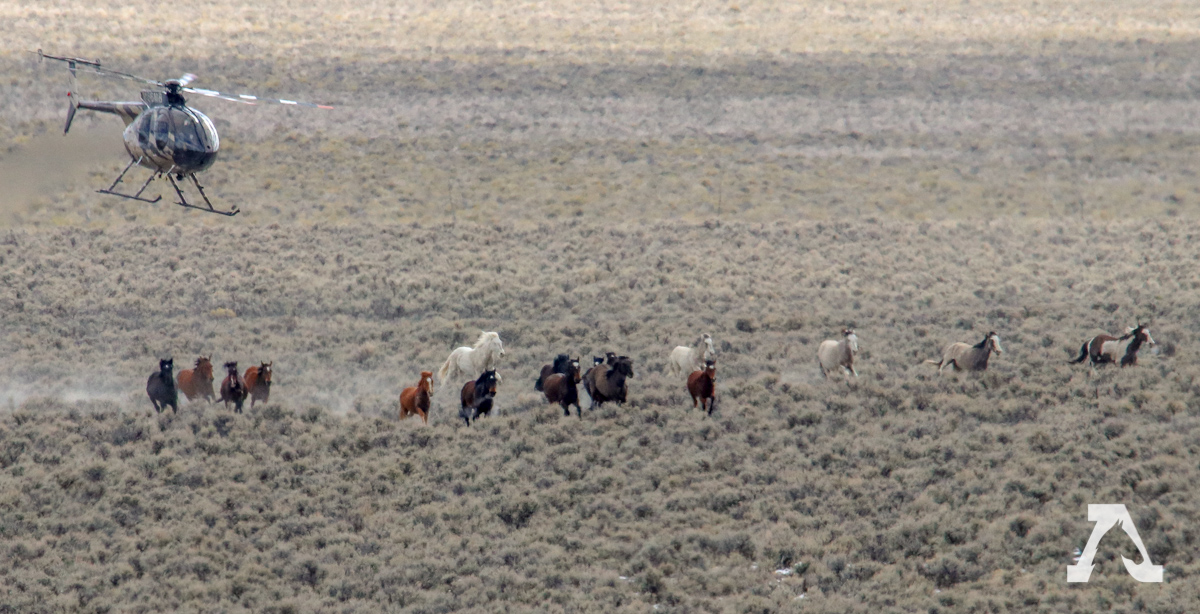 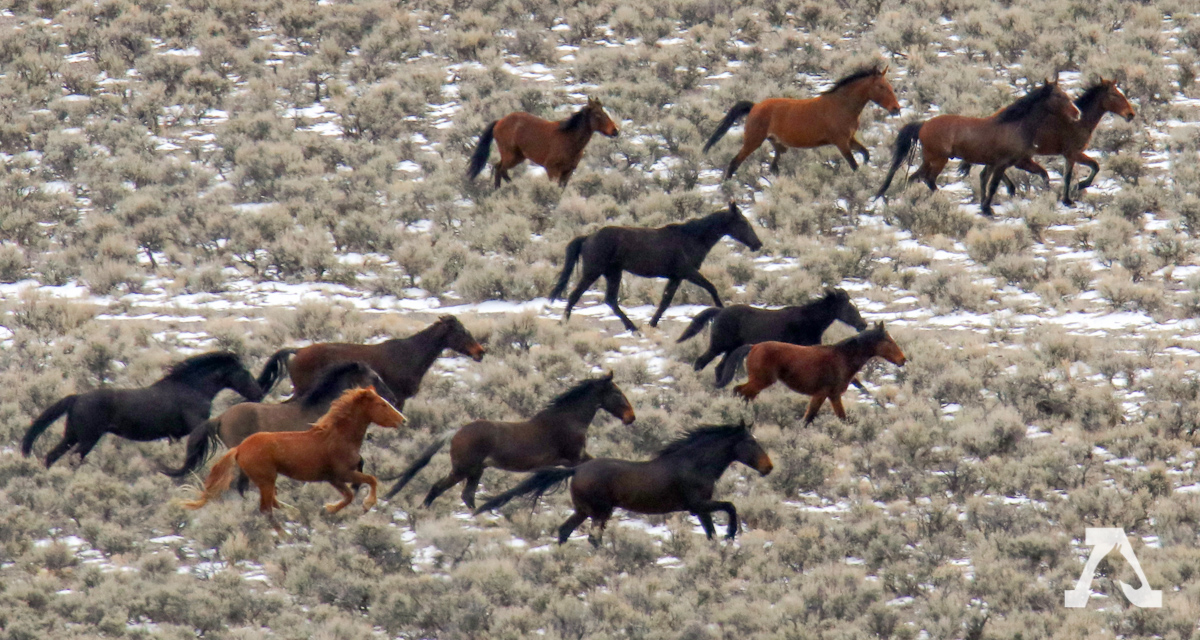 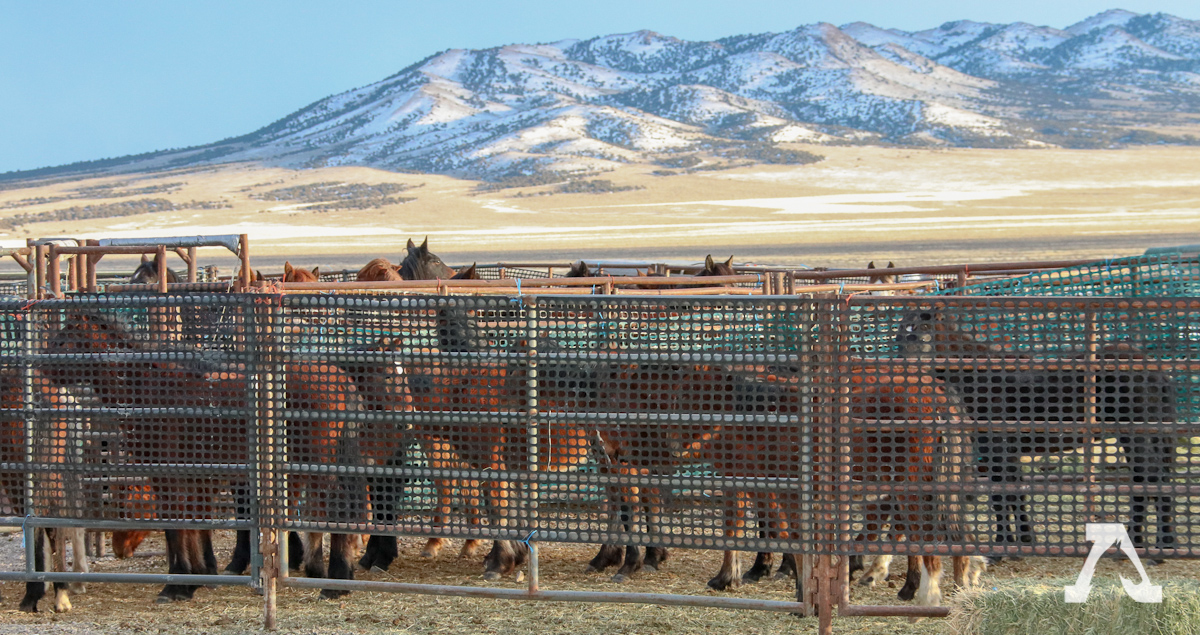 121 wild horses were captured yesterday at the Triple B Complex roundup and there was 1 death which BLM reports was chronic/pre-existing.

Our observers witnessed one horse escape by jumping over the trap jute, and watched as helicopters brought in 3 mares with small foals -- one of which had to carried into the trapsite -- a sign that foaling season has officially begun and therefore the roundup should conclude. Fortunately, the BLM released the mares with their foals back into the HMA. 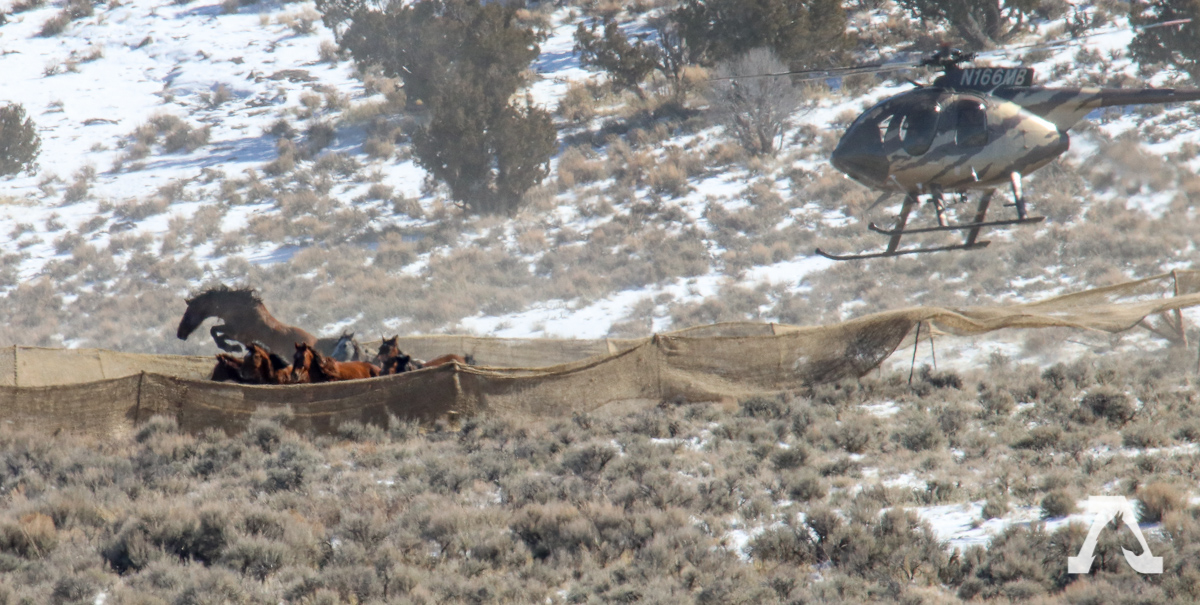 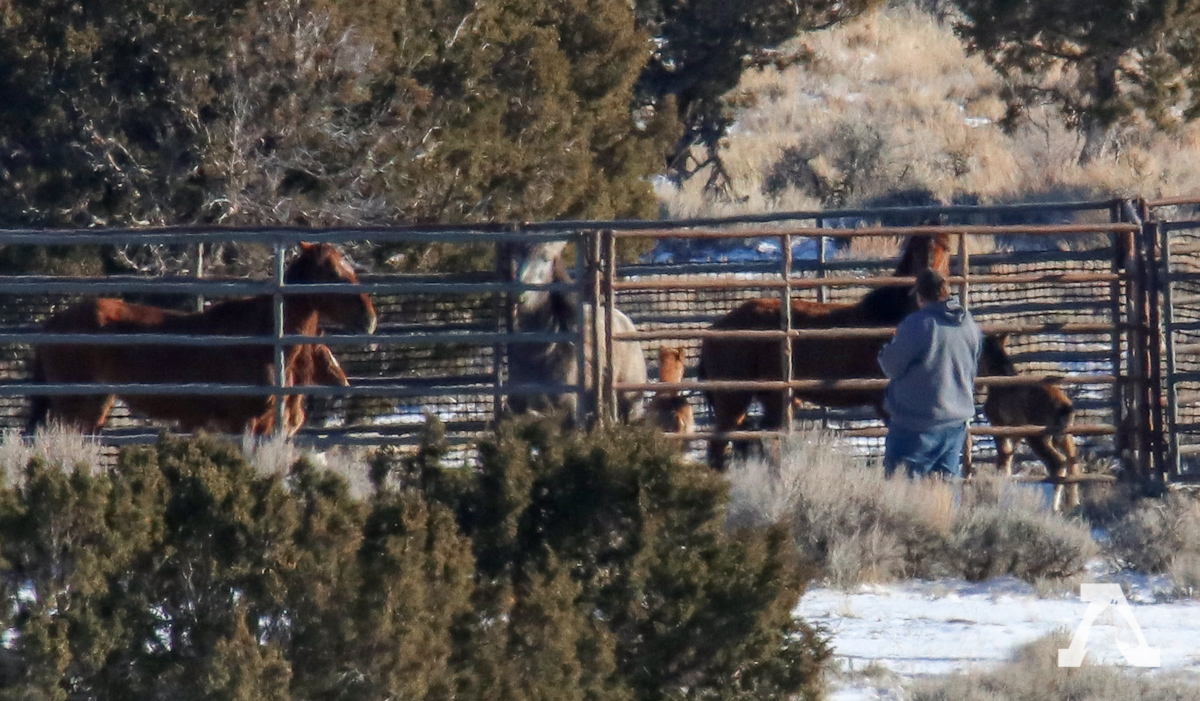 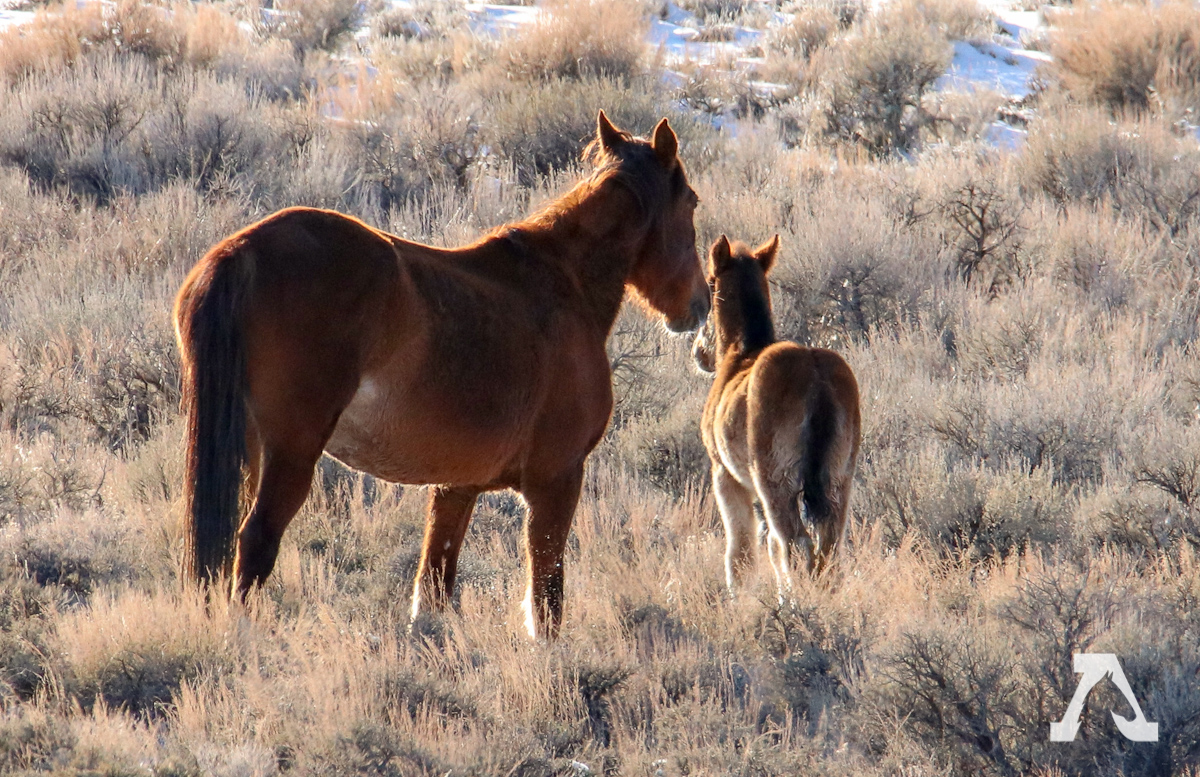 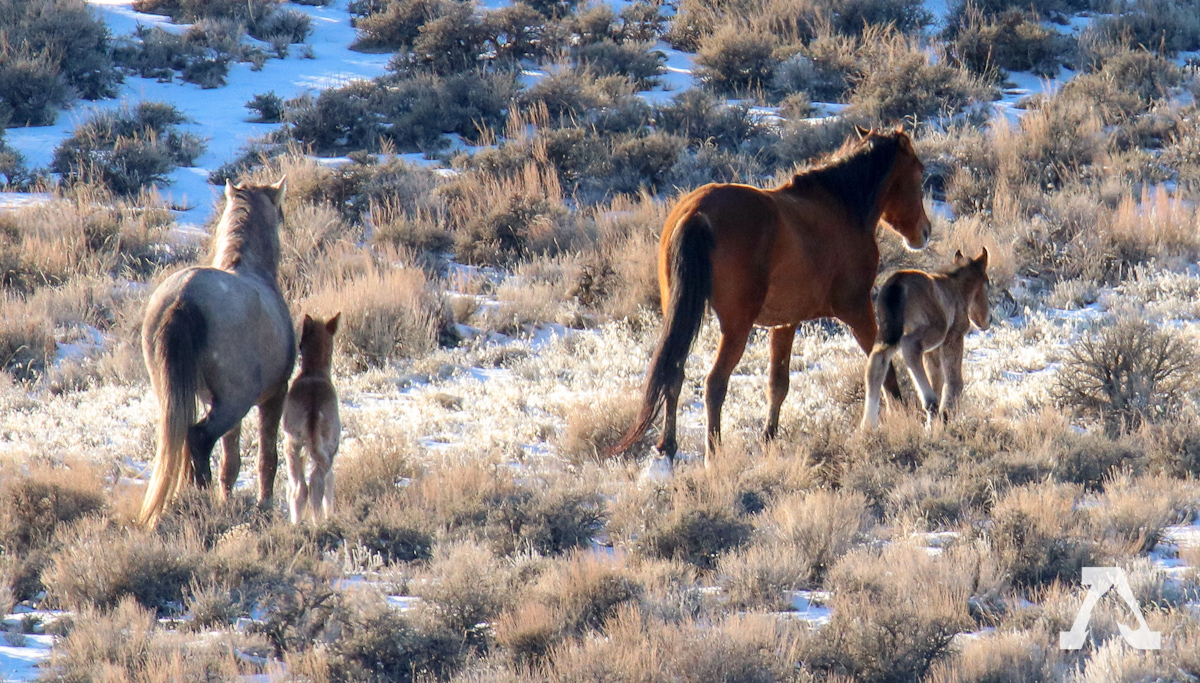 The roundup continues today, for what we hope will be the final day.

Two members of the AWHC team attended the 20th day of the Triple B Complex roundup and removal yesterday. It was unclear in the morning whether or not the helicopters were going to fly because of the weather. While waiting for the roundup to get started on the Triple B HMA, we had a band of wild horses pass by as they made there way up the mountain. 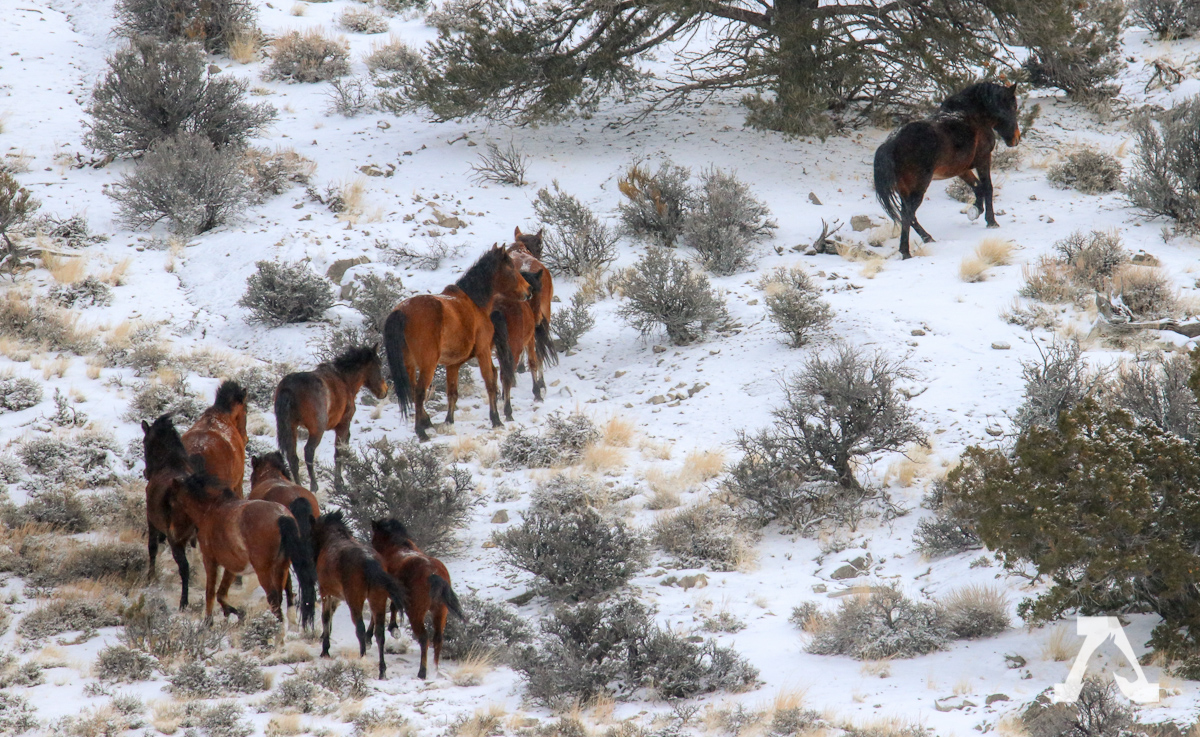 The decision was made that before an incoming snow storm hit, that the operation would move forward. The day started with a large group of horses being pushed into the trap as the white out conditions set in. 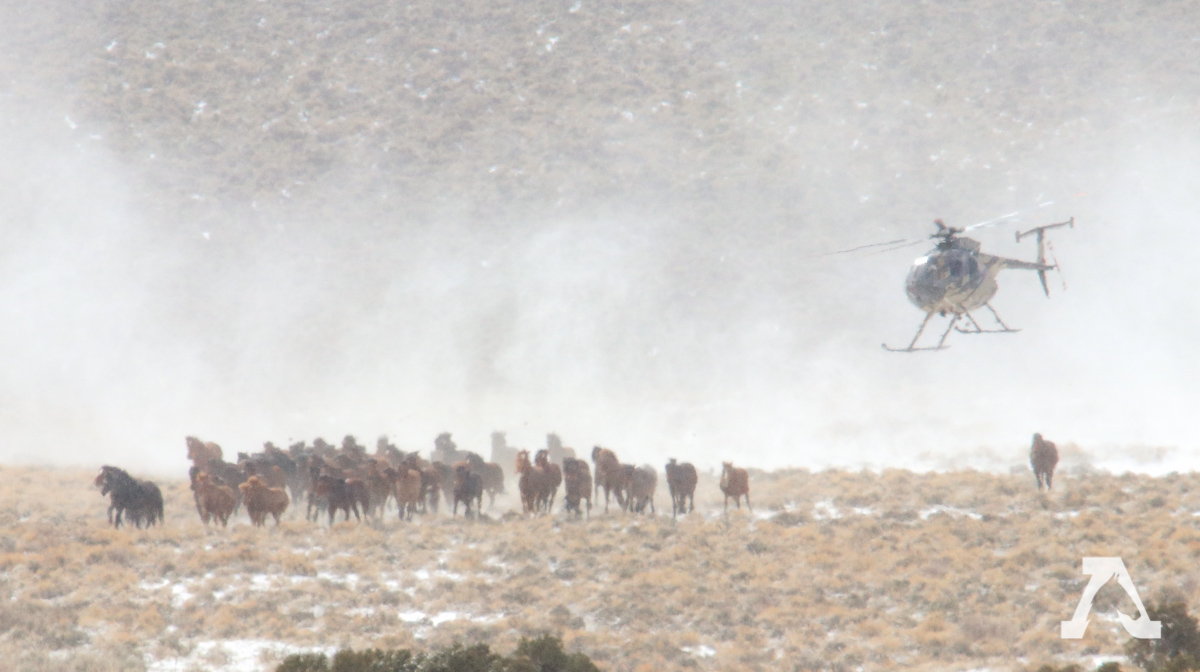 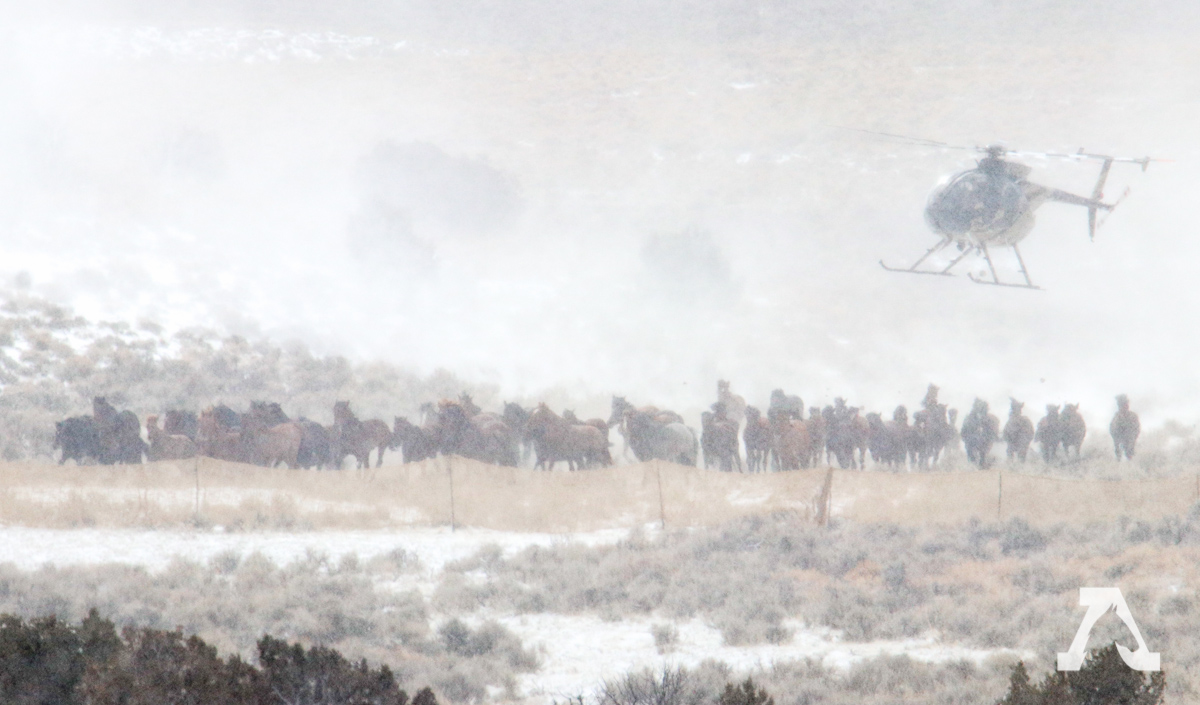 After waiting for a break in the weather, they managed to capture several more bands. 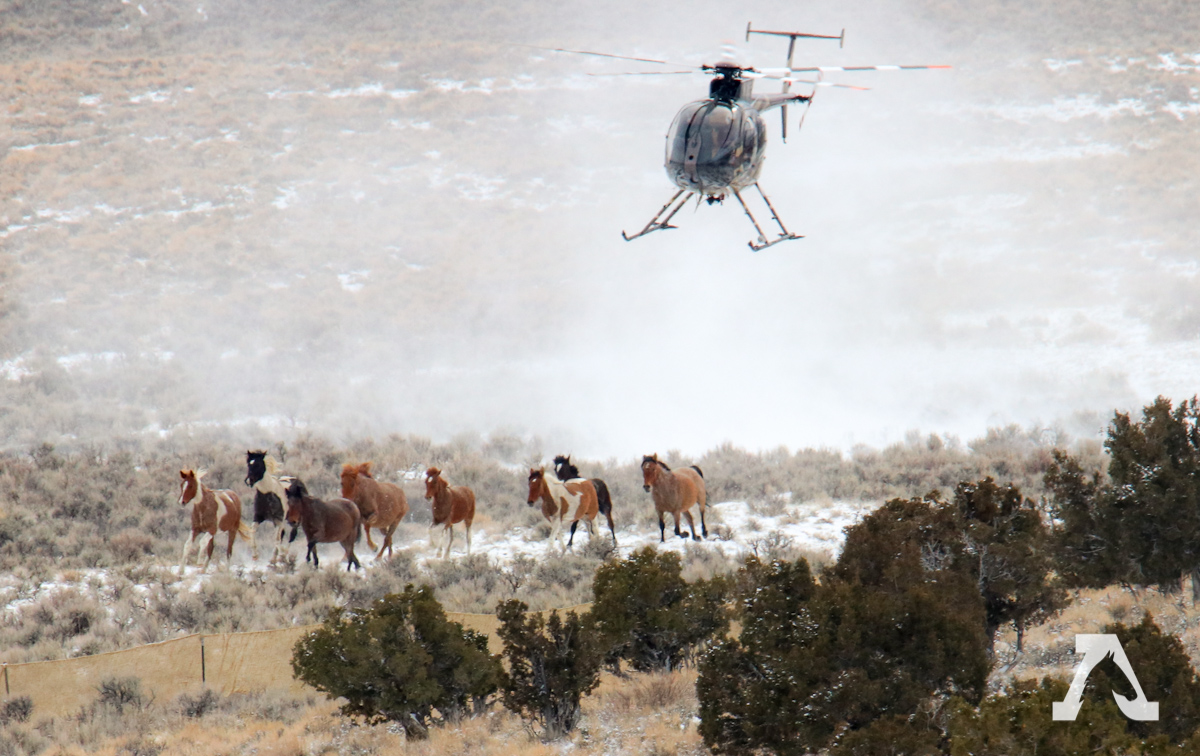 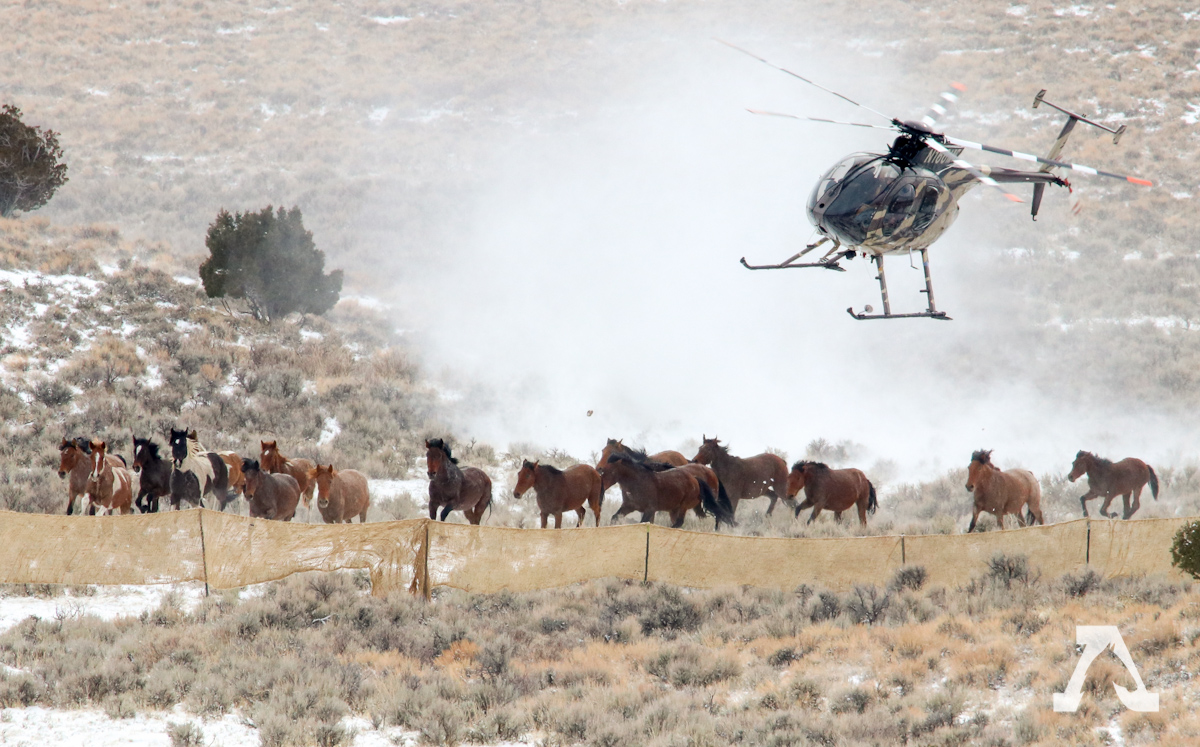 A young horse escaped being trapped, checking on its family in the trap pens before running off. 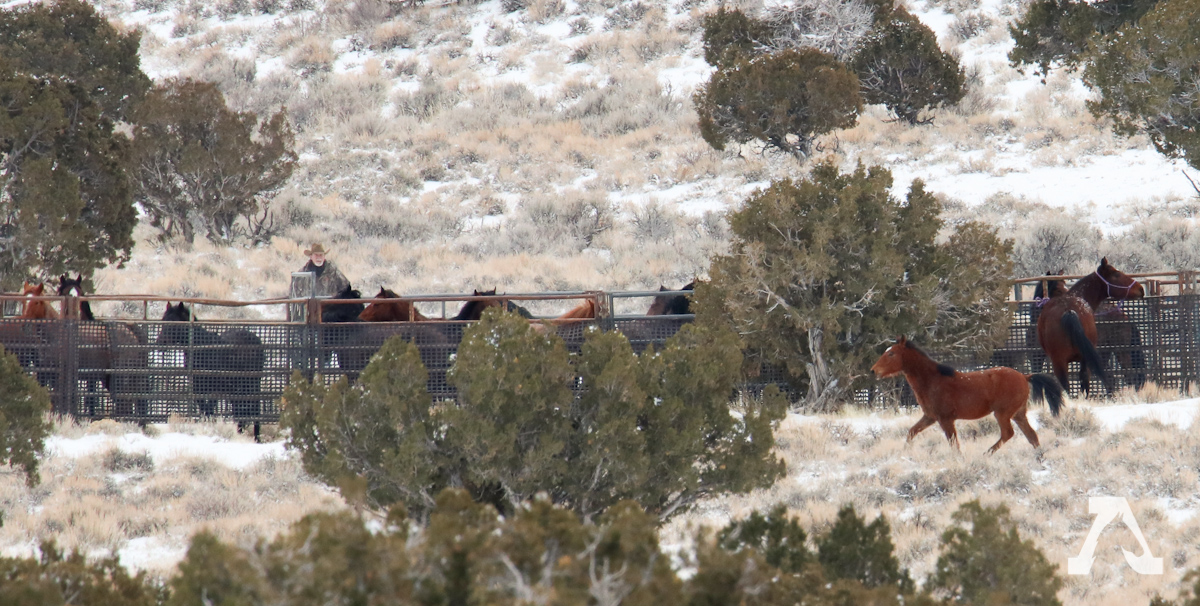 The helicopters did not fly today because of inclement weather.

Two members of the AWHC team attended the 18th day of the Triple B Complex roundup and removal yesterday. The BLM caravan left to head out to the trap site -- a three hour drive on the border of Ely and Elko, Nevada -- at 6am.
99 wild horses were removed from the range* and 6 horses were euthanized.
Photos: Steve Paige 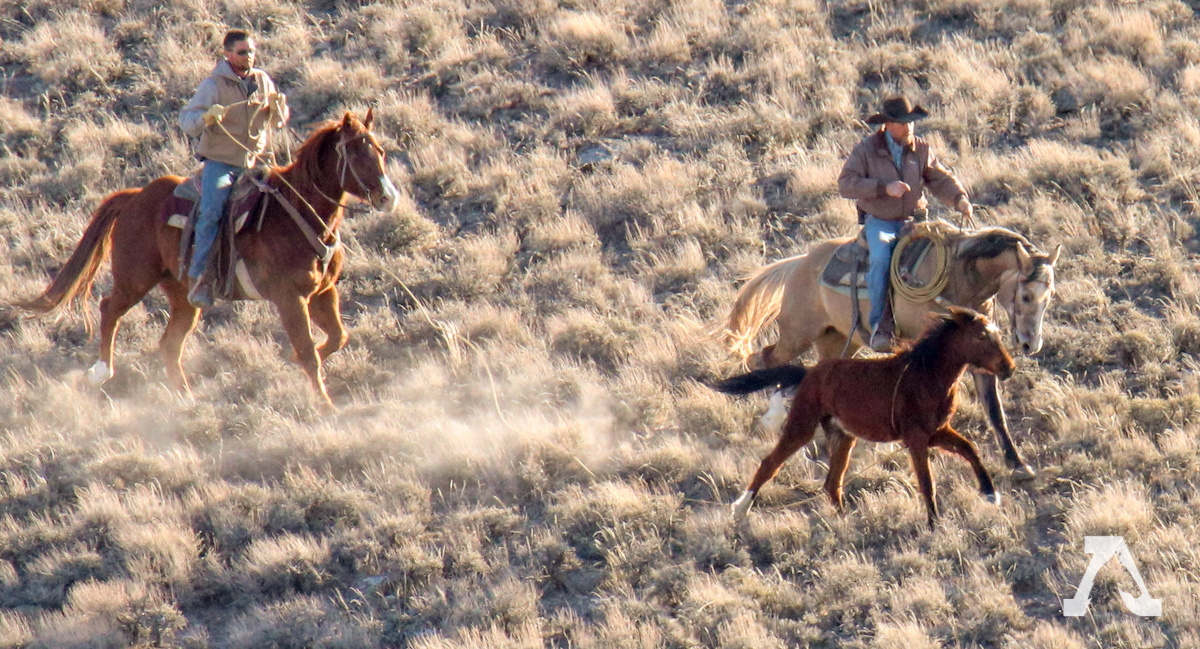 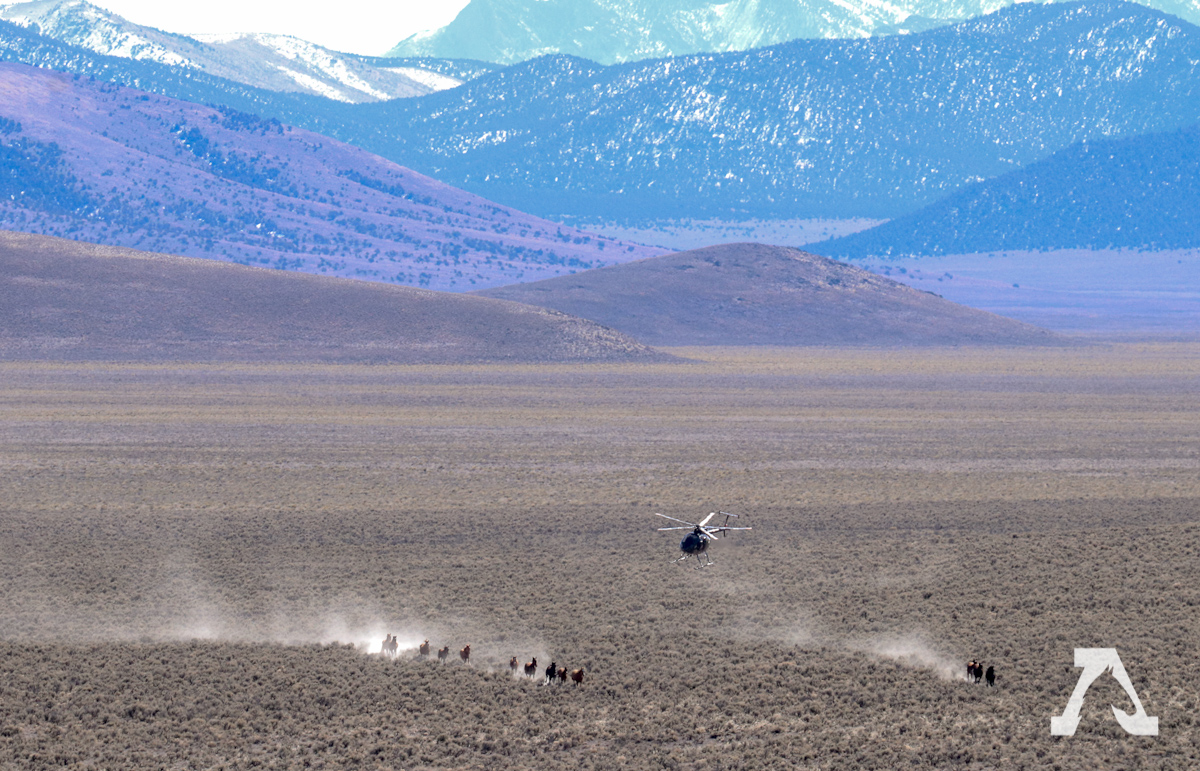 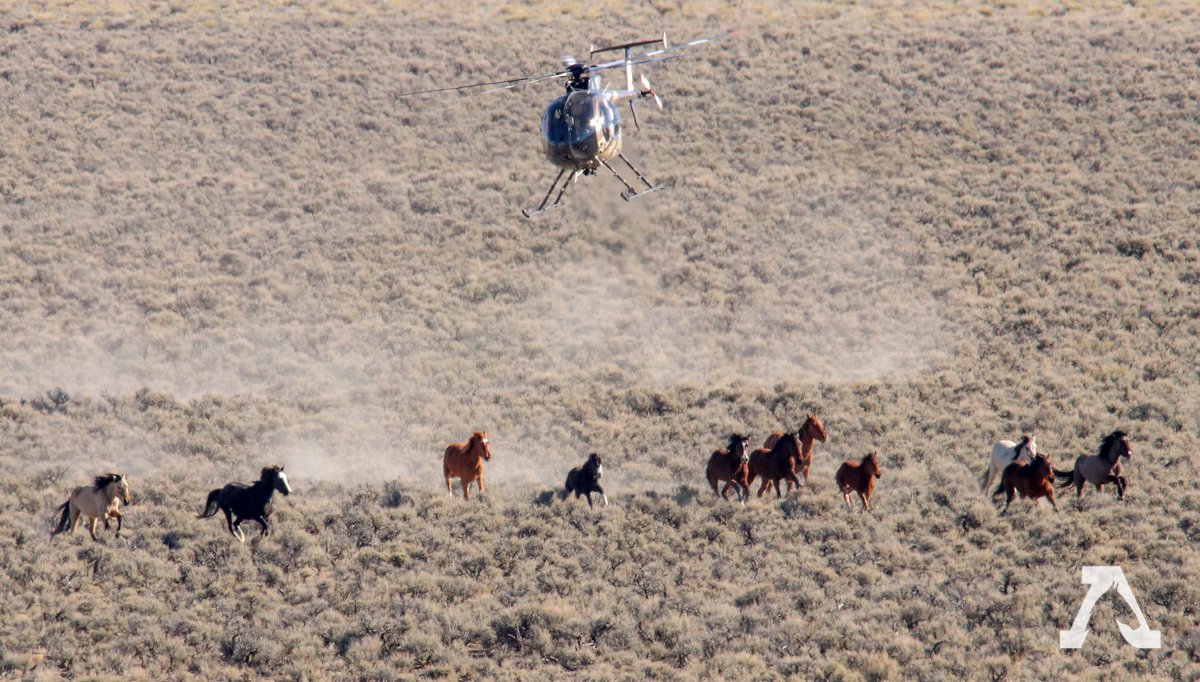 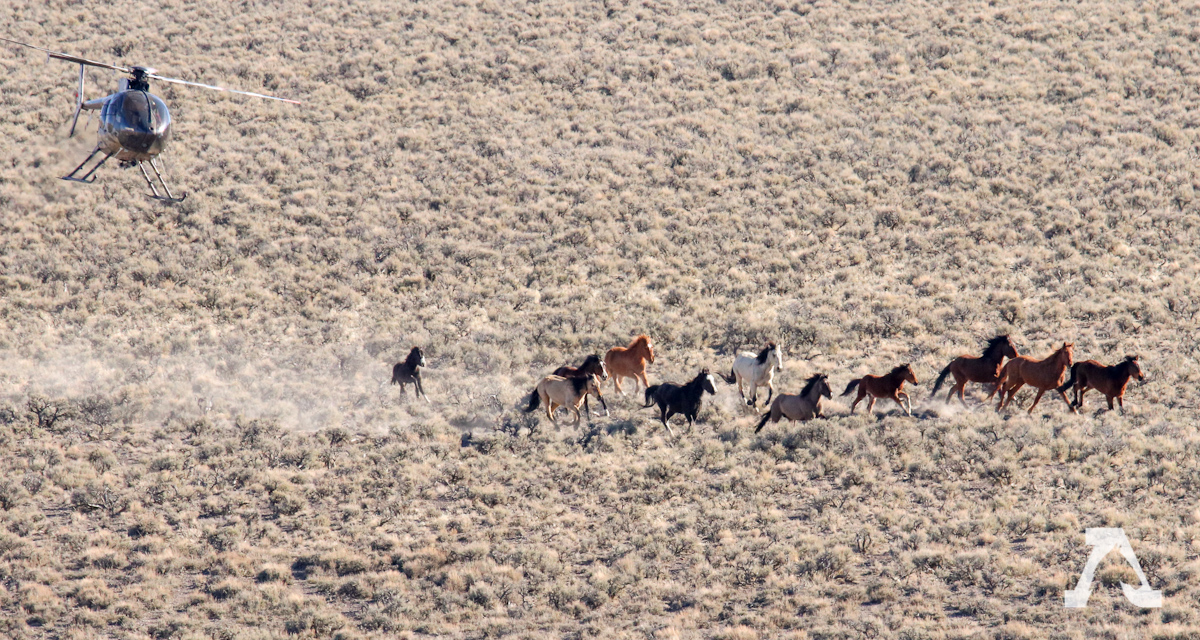 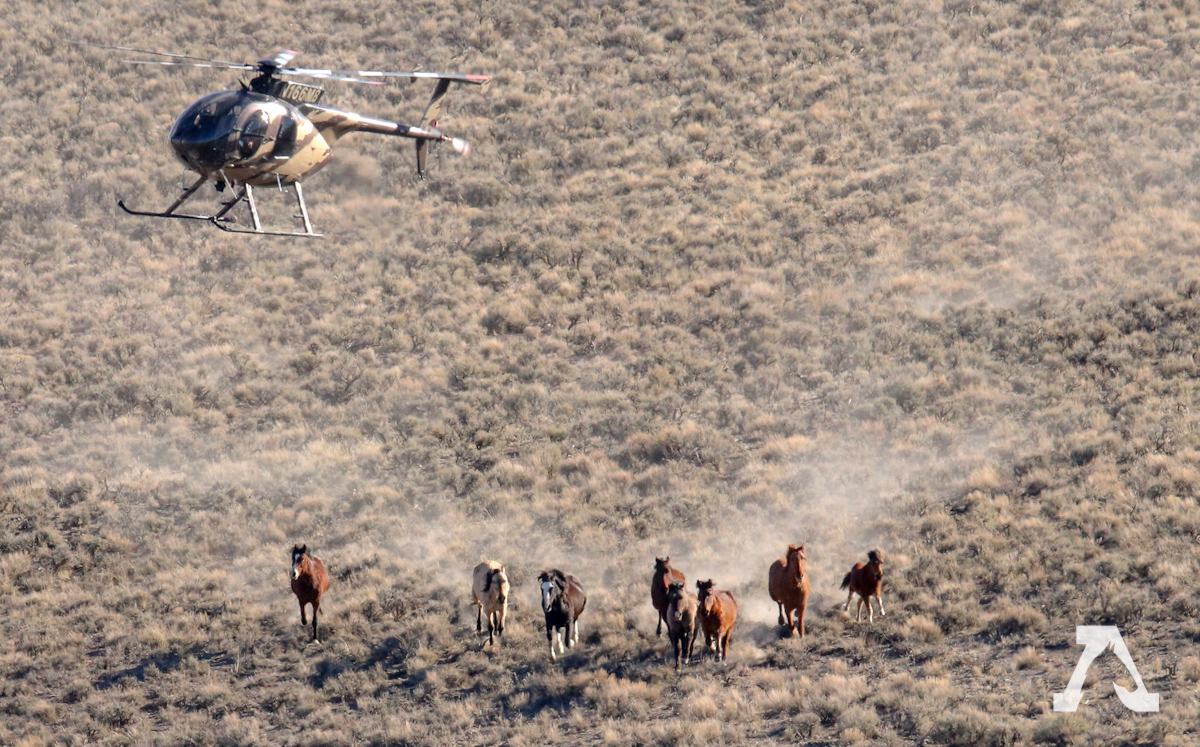 Originally, the BLM had planned to roundup 1,500 wild horses and remove approximately 1,000 "excess horses". However now, the BLM will roundup fewer total animals, but will remove an additional 300 horses from the range.  Approximately a total of 1400 wild horses would be rounded up, of which 1300 horses will be removed.

Only a total of 28 mares were treated with PZP and released.

The majority of the horses identified for removal will be transported to the Palomino Valley Wild Horse and Burro Adoption Center in Reno, Nevada. Should the Palomino Valley Center reach capacity, the remainder of the horses removed will be transported to the Litchfield Wild Horse and Burro Corrals, located in Susanville, California.

Stay up to date on this operation here.

Cumulative roundup total as of February 8, 2018: 181 wild horses have been removed from the Bible Springs Complex in Utah, and there have been two deaths.

Background: This removals are being conducted to fulfill an Agreement made between the BLM and Utah School and Institutional Trust Lands Administration (SITLA) which entered into on February 3, 2016.

The Agreement, which is subject to congressional appropriations, places priority on the removal of  horses in the south-central and southwest areas of the state, where a lawsuit was originally filed by SITLA aimed at increasing wild horse roundups.

We watched as 23 wild horses were removed from the range today. All of the horses had body conditions of 5's with the exception of two that were 4's.  A four-year-old bay mare was euthanized according to BLM because of  a "severe deformity in the right front knee caused by torn ligaments from an old injury."

We began the day again at 5:45 AM, and followed BLM back into the Blawn Wash HMA, about an hour and a half drive. The trapsite and viewing were in the same location as the previous day.

It was another slow day of horses being driven in by small groups of 2-5. There don't seem to be many horses in this area. The helicopter would be gone anywhere from 30 minutes to an hour and horses would come in drenched in sweat, even more evidence that they were running them from long distances.

Just like yesterday, there were smaller horses who did not want to cooperate with the helicopter pilots, and the decision was made to go out on horseback and rope them. Our video shows that the horses today fought, and tried break free - one horse toppling to the ground.

19 mustangs were rounded up and removed from the range and there were no injuries or deaths reported.

We met the BLM this morning at 5:45 AM in Cedar City, Utah to drive to the Bible Springs Wild Horse Complex. The Complex is comprised of 4 Herd Management Areas (HMAs): Bible Spring, Blawn Wash, Four Mile, and Tilly Creek and is approximately 223,000 acres in total.

The BLM started the operation with the Blawn Wash HMA in Beaver County, Utah. It was a nearly two-hour drive to the trapsite and the helicopters did not take off until approximately 1:30 PM. The helicopter pilot seemed to have a harder time bringing in horses. Most of the horses looked to be on the smaller side, and after multiple attempts a call was made to go out on horseback in conjunction with the helicopter.
16 wild horses were captured in total and at there was one death. All of the horses coming in off of the winter range looked great with body scores of 4's and 5's.
An approximate 18-year-old mare with a pre-exisitng hip condition was euthanized after her hip came out of socket.

Wednesday, January 24, 2018, Day 2
Unannounced to the public, the BLM began the roundup of wild horses from the Cold Springs HMA a day ahead of schedule. 88 wild horses -- 33 studs, 38 mares and 17 foals -- were captured without public observation or transparency.
There were two deaths. The BLM euthanized a 15-year-old mare who was missing one eye and partially blind in other, and another 15-year-old mare died in the holding corraL after capture. The necropsy identified a previous skull fracture and stated that the horse likely died of an aneurysm.
Thursday, January 25, 2018, Day 3:
We met the BLM before sunrise at the Vale Oregon District Office to caravan out to the Cold Springs HMA trap site about 2.5 hours away.
We arrived at the location after sunrise, but it was extremely windy and the helicopters did not take off until around noon. Our vantage point was unfortunately located on a flat plane, so our viewing was often obstructed when horses ran down dips in the landscape, or behind hillsides.
46 wild horses --25 studs, 12 mares, and 9 foals -- were captured, and there were no known injuries or deaths. The horses came in looking healthy.

The BLM relayed that approximately 38 mares will be treated with the fertility control vaccine PZP and release back to the range. The roundup aims to reduce this already small wild horse population to the low "appropriate" management level of just 75 horses.
Friday, January 26, 2018:
The BLM canceled the third day of the roundup due to inclement weather. The trapsite will now likely be moved to the Hog Creek HMA to remove approximately 30 wild horses.
All horses removed from the range will be transported to Oregon's Wild Horse Corral Facility in Hines, Oregon.
Tuesday, January 30, 2018:
The BLM concluded the roundup of wild horses from the Cold Spring and Hog Creek HMA. A total of 134 wild horses were captured, and there were two deaths as noted above. As of January 31, 2018, the BLM has not yet released how many horses were captured at Hog Creek. 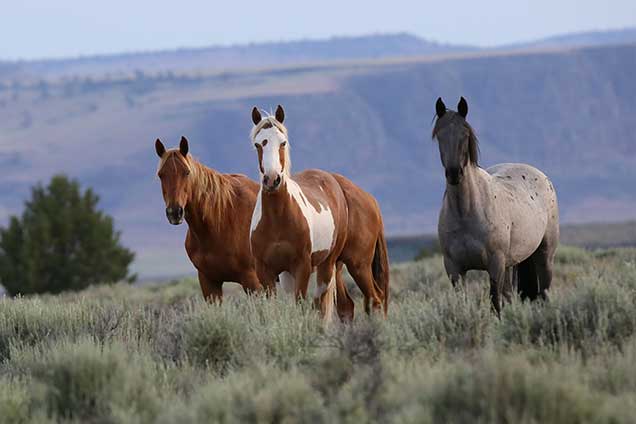 The BLM Vale District office is currently conducting a bait/water trap removal of approximately 60 wild horses from the South Steens HMA in Oregon. Horses that are removed from the range will be transported to Oregon’s Wild Horse Corral Facility in Hines.

Stay up to date on this operation here. 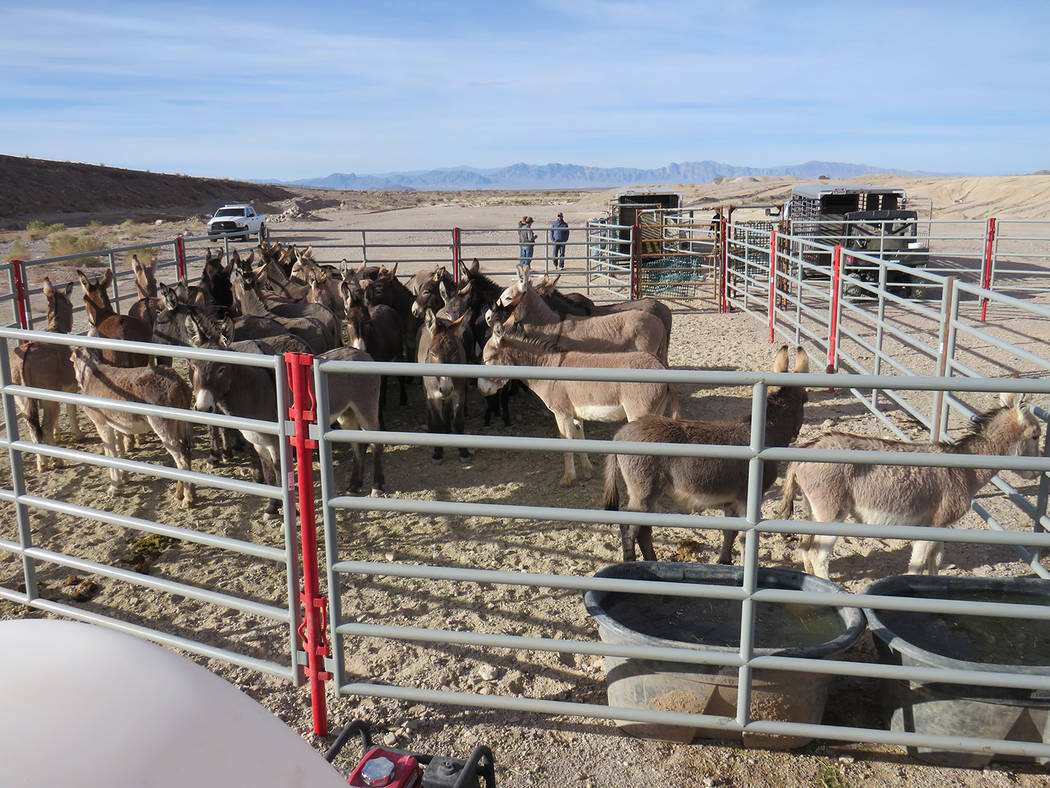 Beginning on December 19 and ending just 5 days later, the BLM captured and removed 117 wild burros from their home on the range outside of Las Vegas, Nevada using the bait/water trap method. The final tally included 74 adult males, 31 adult females and 12 foals.

This operation resulted in the death of one burro; a 30-year-old jenny who was, according to BLM, in "really poor body condition" and was euthanized at the trap. All burros were transferred to Ridgecrest Regional Wild Horse and Burro Corrals in California.