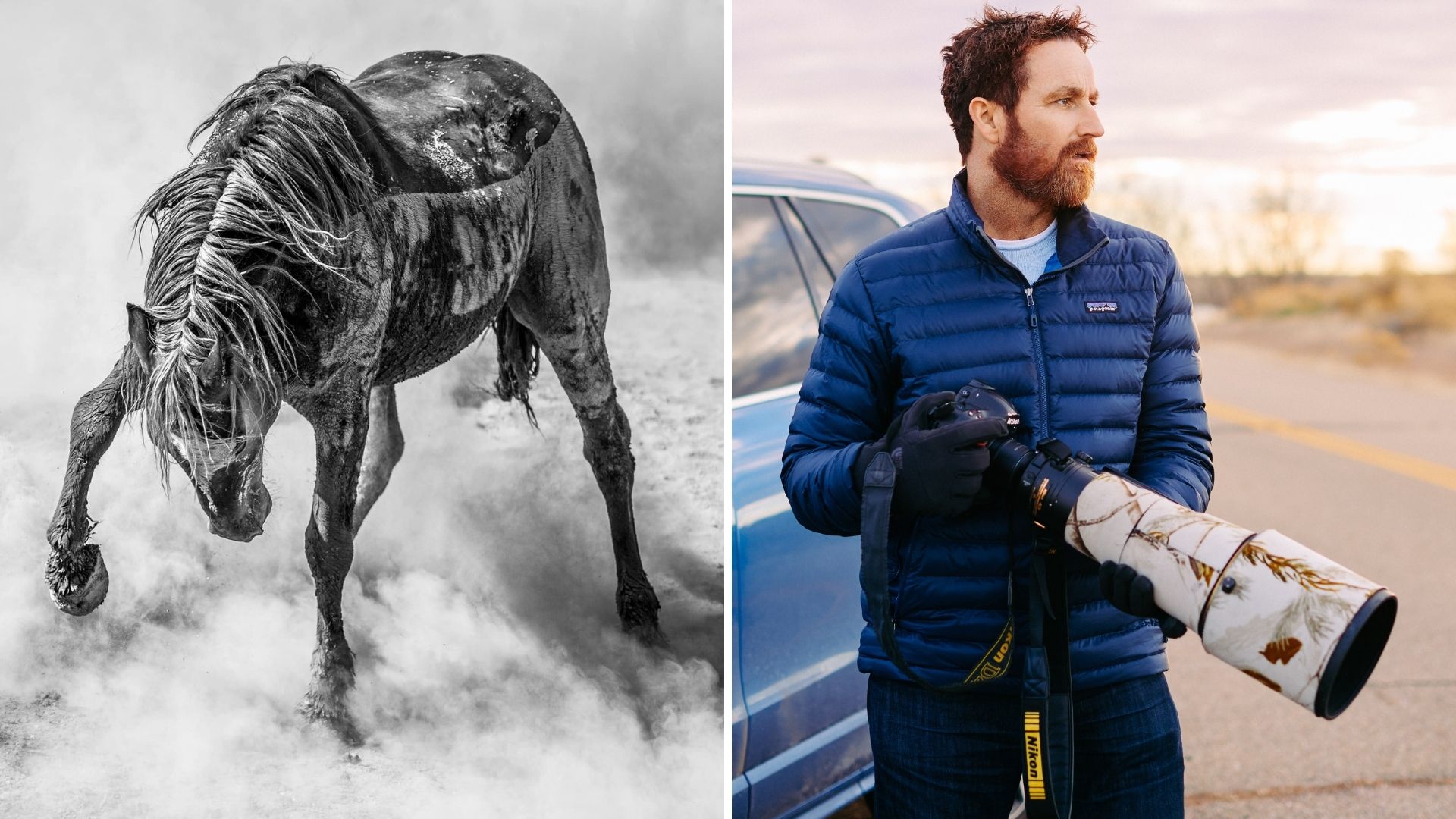 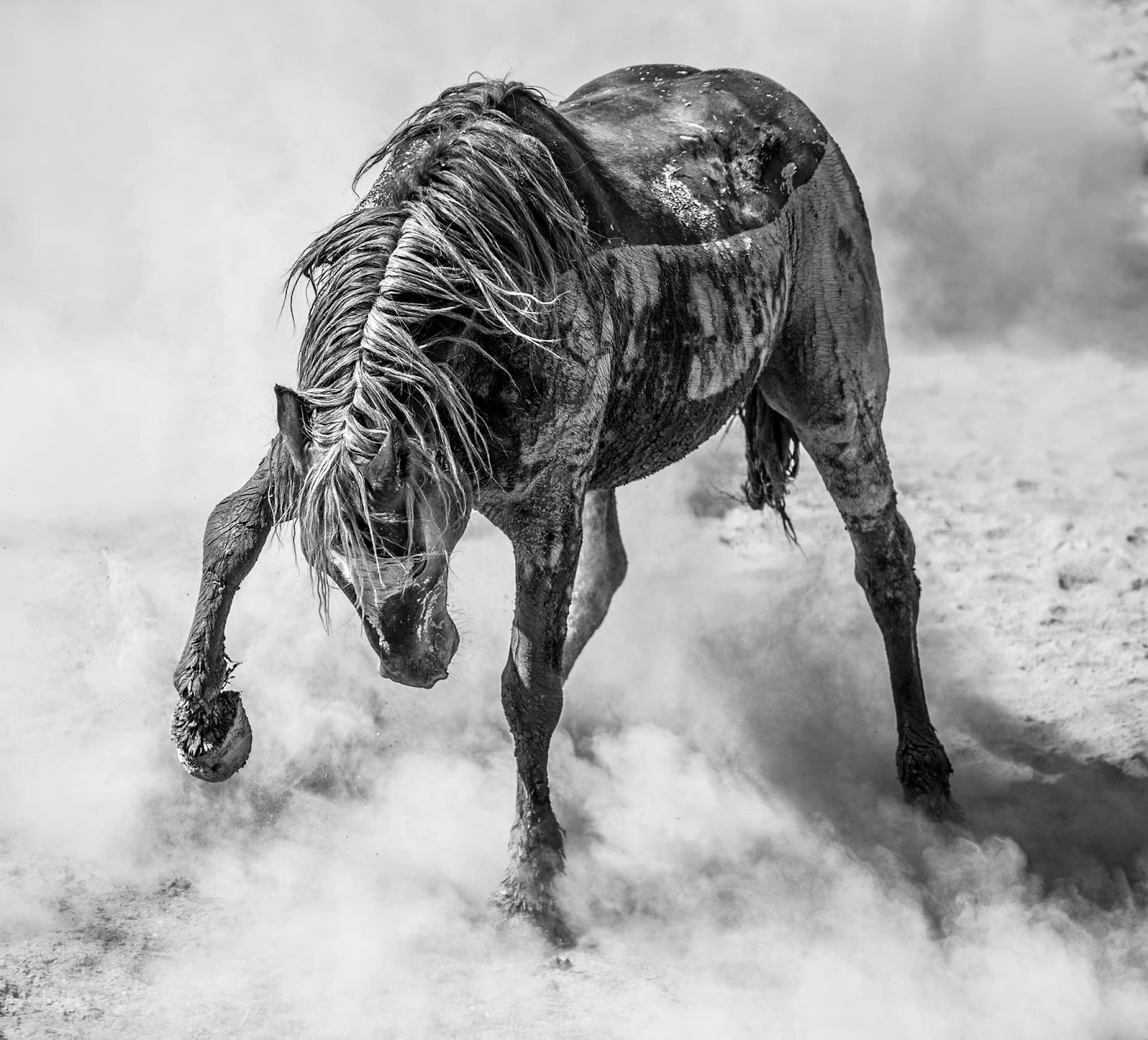 Denver-based photographer and American Wild Horse Campaign (AWHC) board member Scott Wilson created the black and white image of the stallion, which won two top awards in the 2022 SONY World Photography Awards contest. Out of 170,000 entries from across the globe, the image, titled Anger Management, won first place in the Natural World and Wildlife category and, earned Wilson the Open Photographer of the Year prize.

Wilson hails from Glasgow, Scotland and has lived in Colorado with his wife and two children since 2015. AWHC recently sat down with him to talk about his photography background, the winning image, and his passion for wild horses. The interview has been edited for length.

AWHC: First, tell us a little about yourself, your move to Colorado, and how you found wild horses.

I was in the brewing business [in Britain] and was a landscape photographer. So, the invitation [from Molson Coors Brewing Company] to move to Colorado and the stunning landscapes we have here was just absolutely exhilarating. We spent our first year just touring every corner of Colorado.

And then one year after moving here, I was diagnosed with stage four colon cancer. And, as you can imagine, that puts quite a stop on things. Obviously, my first priority was not photography! It was finding a great oncologist!

One of the drugs I was on is called Panitumumab and it basically creates this really, really severe sun sensitivity, so I could no longer go out with my skin exposed to the sun. And I was like, well, how am I supposed to do landscape photography?

And, it occurred to me that we have these amazing state parks in Colorado and you can drive through them, too. There's just this abundance of wildlife on my doorstep that I could access from my car window. I basically showed up in the shade of my car for a year and built a wildlife portfolio. There was enough there to produce a fundraising book - my first foray into publishing - called Through the Window, which was a fundraiser for the Colorado Cancer Alliance.

From there, I was introduced to the wild horses. I visited a sanctuary east of Denver and absolutely loved these horses. I first visited the Sand Wash Basin in northwest Colorado in April, 2018 and was just blown away by, first, the vastness of the place. It’s absolutely huge - 160,000 acres. I think it’s compared to greater New York in terms of scale. The first inkling I had of horses was a feeling of thunder - the ground shaking and this band of horses just careered probably two, 300 yards away from me. I could feel it long before I could see it. I was kinda hooked from there.

AWHC: You’re a self-taught photographer. Talk about that.

I fell in love with nature and landscapes. I was working in communications and I had access to photographers so I asked one of them to recommend a good amateur camera. I mean, we're talking 25, 30 years ago so that set me on a path with Nikon©. I did what most would-be photographers do - you start with your family, the nature around you. And shortly after we moved to England, I joined a club and I think that was the start of my real training. There's nothing like the scrutiny of a club competition judge - to actually put yourself under that kind of scrutiny and have your work basically critiqued.

And in Britain, compared to the US, there's a slightly more blunt way of judging and assessing imagery, arguably more heartfelt and more helpful because you learn very quickly the things to correct, the mistakes you're making. So, I could say I was self-taught but I've never completely taught myself. I was very open to the generosity of people. I think photography is a generous hobby. You know, people like to share their wisdom and that's something that I hold to today. I still do lectures and talk to people, and am happy to help them and expand their knowledge.

AWHC: On March 15th, the Sony World Photography Awards announced that Anger Management, the powerful, black and white, wild horse image, had been selected from almost 200,000 entries as one of the winners in 10 categories. You’ve also been chosen as Open Photographer of the Year. Talk about what you've won.

The [Sony World Photography Awards] is organized by the World Photography Organisation, sponsored by Sony, and has been running for about 15 years now to the point that it's maybe the biggest photo competition in the world. It was the first time I've actually entered. I've done lots of local and national competitions, but I was excited to see how I could fare in a global competition.

The ten winners of the various categories all go forward for further judging to name the Photographer of the Year. And I was delighted to learn that Anger Management was picked to be that image. I think, importantly, it puts the wild horse question in the minds of people that are suddenly seeing this image, seeing a stallion pounding the ground in America and really starting to question what's going on with American mustangs.

AWHC: Some of your images of wild horses go beyond the sort of portrait images of these animals. Case in point: Anger Management. Are you willing to share how you get an image like this? It seems like you'd have to be on the range day after day after day or at least know what to look for.

I think in terms of knowing where to go, it’s just years of experience, touring this vast landscape. You learn to recognize some of the nooks and crannies where the horses are. Waterholes are a clear draw and in the summer, it's like going on safari in Africa - the animals are literally drawn to the waterhole. That's where they're congregating.

[Anger Management] was exactly one of those scenes. It's the middle of summer. It's probably a hundred degrees outside. And this horse has just submerged himself in a mud pool. And they do that, not just to refresh themselves but also to cake themselves in mud that will then protect them from flies and bugs, which are really prevalent in the summer. And then he said, “Right, I need a drink!” And he's basically pounding the ground to let other stallions know that he’s ready to fight for his place at the front of the line for water.

This is a perfectly natural behavior. But the tension and the drama for me just felt completely symbolic of the challenges these horses face in the American West today, where they basically are under permanent threat of roundup and their land has invariably been cleared for the beef industry. And that's not just Colorado, that's all of our public lands where the horses roam that they are now competing with the livestock industry for, which was their law-given, protected home. And so, the more that people understand how much these treasured, wild animals are under threat, the better. I think it's really important to raise awareness.

It’s very different from the technical point of view, the photographic point of view, and even going back to my primary motivation here, which was landscape photography. The landscape, as you say, is just so vast. Even the choice you make of lenses is different! Everything is kind of compressed, you know, the river’s in front of you, the mountain’s on top of you. So you can use a wide-angle lens and get that whole image in Colorado.

The light is also different. I mean, there's just a dryness here. It's so bright here. And then you add to that, in Sand Wash Basin, the dust, and it's almost combustible. It creates this amazing atmosphere. You've seen it yourself in Anger Management. That dust is just spiraling around this horse and that whole series of images from that two to three-week period in July when the ground is baking just creates this amazing atmosphere.

I appreciate that an amazing photographic atmosphere for me is a challenge for [the horses]. But it’s just a testament to the way these guys are built. They're absolutely built to thrive in these environments and thrive on the forage that's available, the water that's available and they do it. They’re such hardy animals. So I'm the lucky one. I'm only there for three days. Then I can drive home again to the comforts!

AWHC: What kind of equipment do you use the most when you're shooting wild horses?

Invariably, a long lens and, for me, the longer, the better. The notion that you want to get close to a horse and interfere with them or change their behavior, it's something that I don't want to do.

So, a 600 [millimeter] lens is standard. Sometimes I'll even add a teleconverter to that, which takes it up to 850. That allows me to see all the action close up, but from a great distance. And in that sense, I'm not changing the behavior of the horses. That's important for the horses, but it's also important for your photography.

I mean, anyone who's trying to approach a wild horse knows [the horses] tend to amble away and before you know it, they’re a mile away from you! So it just allows you to stay and witness exactly what's going on without changing their environment. Nine times out of 10, I'm using a tripod for stability.

I'll also do sweeping landscapes so people can actually see the environment that [the horses] are living in. It's not just about the wild horses, it’s the context they're in. That place is full of wildlife. I’ve seen bobcat, sage grouse, eagles - Bald Eagles and Golden Eagles - elk, deer, coyotes...

AWHC: Why did you become a board member of the American Wild Horse Campaign?

I think like a lot of people, I was drawn to the horses because of the fairy tale of the American mustang. Even living in Britain, you know, we're aware of this kind of myth and beauty of the American Mustang and the West.

And so I was drawn to that and I was incredibly lucky to capture it on my first visit. But it's only then that you start to learn the real challenges these horses are facing. And I don't mean the physical challenges on the range. I mean the kind of political challenges, the competition they have to stay in their home, the constant roundup pressure.

And when you start to appreciate that the thing you love shooting is under threat, then I think you feel compelled to try and do something about it. So, you know, I spoke to a few people. I met different people who gave me advice about the opportunity to hopefully make a difference. But joining a team that's completely committed to wild horse conservation was something that was very motivating to me, the opportunity to advocate on behalf of these horses that literally cannot speak for themselves. And it's something that I might try and do through my lens.

AWHC: Wild horse advocates tend to name the mustangs on the range, following their heritage from one generation to the next. Does the stallion in Anger Management have a name?

I do know his name and he is still free in the Basin. But, I have been reluctant to name him so that he remains representative of all mustangs in the fight.

AWHC: Is there anything you’d like to add, Scott?

Honestly, thank you to Sony and the World Photography Organisation for the opportunity and just for the absolute privilege of winning this competition. It's just fantastic! On a personal level, you know, it's the biggest thing, clearly, that’s ever happened to me as a photographer. But the notion that it creates a platform where we can tell a story on behalf of the American Mustangs, to me, is incredibly powerful. So I'm grateful for that.