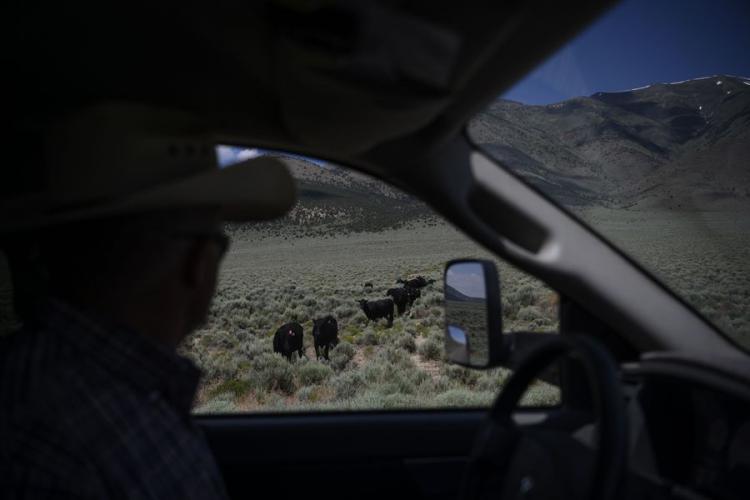 The battle over wild horses

The battle over wild horses

ELKO COUNTY, Nev. — Wild horses may be symbols of the wide-open American West, but J.J. Goicoechea watched them warily. Under a bright desert sky, about 20 mustangs munched on the crested wheatgrass meant for the Angus cattle he grazes here on public land.

“You’ve got to look up to them. They’re tough,” the fourth-generation rancher said, leaning against his dusty red truck. “But if we turn a blind eye, in five years there will be 100 horses here, and it won’t look as good.”

Goicoechea has long been on one side of the battle over wild horses and burros, an issue so contentious that Congress, animal advocates, conservationists, ranchers and the Bureau of Land Management (BLM) have long been in a stalemate. Everyone agrees the situation is untenable: The government says three times more equines roam public land than the fragile terrain can handle. To address this, the BLM, which is charged with managing most of the animals, periodically rounds up horses and now has nearly 50,000 in holding. The agency says caring for the warehoused animals devours most of its wild horse budget, leaving little for other approaches.

Horse advocates call the roundups cruel, contend that millions of cattle do vastly more damage to public lands than thousands of horses, and insist mustangs must never be killed. Ranchers and some environmentalists view the horses as feral pests that damage ecosystems, compete for resources with cattle and wildlife and should be culled or sold.

But against this conflict, at a time of deep political polarization, something almost unrecognizable is floating around Capitol Hill: a compromise. Over three years, major ranching and hunting organizations, represented by Goicoechea and others, quietly negotiated with animal welfare groups, including the Humane Society of the United States. These strange bedfellows recently unveiled a wild horse proposalthat they say meets both sides’ goals: It keeps mustangs alive, and it gets a lot more off the land.

There are just a couple catches: It would cost $50 million a year, swelling the BLM’s horse budget by two-thirds. And most wild horse advocacy groups hate it.

The 10-year proposal calls for scaling up the roundups, or “gathers,” that animal activists have long despised — capturing up to 20,000 horses and burros each year. Those horses would live in private pastures or sanctuaries that provide cheaper and “more natural living situations” than the corrals the BLM now depends on. Wild horse adoptions, which last year numbered about 3,100, would have to increase, the plan says. Its final pillar is aggressive use of fertility control, such as PZP, an injection delivered annually by dart.

“This plan doesn’t benefit the horses at all, or taxpayers. It benefits the livestock industry,” said Grace Kuhn, spokeswoman for the American Wild Horse Campaign. “It’s more business as usual that could end in the mass killing of America’s wild horses.”

The alliance behind the plan, which includes one prominent wild horse organization, dismisses that as a misrepresentation of their proposal — and of political reality. Although the 1971 federal law that protects wild horses and burros allows the interior secretary to euthanize older and unadopted animals or sell them for slaughter, Congress has for much of the past three decades blocked those powers in annual appropriations bills.

But as the free-roaming and fast-reproducing horse and burro population mushrooms — from 40,000 in 2013 to 88,000 last year, according to the BLM — support for the animals has wobbled. President Trump’s budget has called for sales and killing, as have House appropriators and the BLM’s wild horse advisory committee. The status quo, a bureau official told lawmakers in July, could result in half a million horses on the range by 2030.

“We heard from key members of Congress that … they were leaning more and more toward letting the agency have the authority to kill horses,” said Gillian Lyons, a senior legislative specialist for the Humane Society Legislative Fund.

The ranching groups say they had come to believe the opposite — that Congress, regularly besieged by impassioned pleas from horse lovers, would never permit the culling of a symbol of the American spirit.

“We don’t see the world the same way,” Ethan Lane, vice president of government affairs for the National Cattlemen’s Beef Association and executive director of the group’s Public Lands Council, said of animal welfare groups. “The only way this has been successful is us recognizing their concerns over how these horses are managed and them recognizing our concerns over how the rangelands are managed.”

Fertility control could be a compromise. Neither ranchers nor the BLM have ever bought into contraception as a large-scale solution: Last year, the bureau treated just 702 wild horses.

But modeling by ecologists and economists — brought in by the American Society for the Prevention of Cruelty to Animals, another member of the alliance — found that if fertility control were administered to about 90 percent of mares that remain on the range, then roundups could dramatically slow after four years. After 10 years, it says, about 38,000 horses would roam the West, much closer to the government’s target population of 27,000. By then, roundups would be rare, and the few gathered horses could be adopted out, the plan posits.

“I believe in this proposal,” said Goicoechea, who participated in negotiations on behalf of the beef association and Eureka County, Nev., where he is a commissioner. He said he thinks it would require the development of long-term contraception such as horse IUDs, but he found the modeling convincing. “Those graphs, it hits you hard.”

Goicoechea said he was “very skeptical” when approached in 2015 by the Humane Society, an organization best known among ranchers for campaigns against slaughterhouses and for Meatless Mondays. He agreed to attend a meeting in Reno, but he didn’t tell peers.

Initial meetings fell apart over horse advocates’ refusal to entertain euthanasia, participants said. After ranching representatives agreed to take killing off the table, meetings resumed last year in Utah, with a push from Rep. Chris Stewart (R). Goicoechea now talks up the plan at county meetings, and he testified about it in July before a Senate subcommittee.

Goicoechea, who is also Nevada’s state veterinarian, insists he likes wild horses. But he said he’s seen them starve in dry years, and he’s seen land he claims they ruined.

“I know that white mare, and I can tell you when she was born — two years ago,” he said, pointing to a horse whose tail whipped lightly in the midsummer wind. But, he said, “they have to be managed appropriately.”

The day after Goicoechea watched the mare, the BLM began a three-week roundup in the area. The agency said the 1.6-million acre swath of eastern Nevada was home to more than 3,300 wild horses, or four times above its “appropriate management level.” The animals were hazards to workers at a nearby gold mine, a BLM official said: There had been 14 horse-vehicle collisions since December.

Shortly after 9 a.m., a helicopter emerged over a faraway ridge. Like a buzzing sheepdog, it herded a band of frightened mustangs running below toward a “Judas horse” — a domestic animal that led its wild cousins down a burlap-lined corridor that dead-ended in a pen. Among the horses was the white mare.

Over four hours, two helicopters pushed 117 horses into the trap. Foals, some weeks old, struggled to keep up. A lone black stallion stumbled under the chopper before relenting and heading into the pen, the gate clanging behind him.

Three horses were later euthanized due to injuries, the BLM said.

Watching from a distant hill were a few activists, including Laura Leigh, who has sued the agency over its treatment of wild horses during roundups and other policies and won. When asked about the proposal, she scoffed. It did not address overgrazing by livestock and ignored mining and gas projects that squeeze horses out of public land, she said.

“They don’t even know what’s going on out here. They’re drug salesmen,” she said of the Humane Society, which holds a federal registration for PZP but insists it does not profit from it. “They sold the wild horse down the river.”

Other critics, including the former CEO of the Humane Society, have been similarly scathing. The proposal is vague, they say, and could allow surgical sterilization of mares, a procedure viewed by horse advocates as brutally invasive. Eventually, the cost of feeding all the horses in holding would provide an opening for mass euthanasia, they say.

The criticism has hit Return to Freedom, a California-based horse advocacy group that signed onto the plan. It has lost donors and battled accusations that it supports roundups and sterilization. But Neda DeMayo, the group’s CEO, said the plan is an opportunity to prove fertility control can work, even in large areas where horses are difficult to reach.

“The fact that we have a chance at shifting management to move away from these traumatic, senseless roundups and move toward better solutions in the near future is critical,” DeMayo said. Ranchers, she added, “are not going to say, ‘Thanks guys, we’re just going to take our cows off now.’ A huge step forward is that there is conversation.”

Whether Congress will agree is an open question. House appropriators budgeted $6 million for a pilot version of the proposal — a “not serious,” sum, according to Lane, the beef association lobbyist. The Senate has yet to weigh in.

The day after the roundup near the mine, three semis pulled up across the state outside Reno, at the largest BLM horse holding and adoption center in the country. Inside the trucks were the horses captured the day before.

Workers separated the animals into groups — stallions to one corral; nursing mares and foals to another; “dry” mares to another. Among the dry mares was the white one Goicoechea had recognized.

Over the next few weeks, she’d be branded and vaccinated. She might be adopted here. But more likely, she’d be shipped out to a federally funded corral or pasture — one more horse off the range and into government storage.