The Bureau of Land Management’s (BLM’s) plan to surgically sterilize mares from the Warm Springs Herd Management Area (HMA) is not new. We stopped a similar plan in 2016, and we plan to again. Here is what you need to know:

In 2016, the BLM planned to conduct a series of sterilization experiments on wild mares at the agency’s corral facility in Hines, Oregon. The experiments on 225 wild mares were set to be conducted by the staff of Oregon State University (OSU). The study implemented three sterilization techniques: (1) ovariectomy via colpotomy, (2) tubal ligation, and (3) hysteroscopically guided laser ablation of the oviduct papilla. A primary goal of the BLM’s plan was to determine the “social acceptability” of each type of sterilization procedure. Yet, the BLM refused to allow any public observation of the procedures.

Ovariectomy via colpotomy involves literally reaching into a mare’s abdominal cavity through an incision in the vaginal wall, blindly and without any tool to visualize the mare’s organs, to identify the ovaries by touch and to remove them by severing them with a loop of chain. The blind nature of this procedure distinguishes it from a similar, but significantly less invasive, “keyhole” procedure that veterinarians perform on domestic mares using a laparoscope that allows them to see what they are doing. Tubal ligation involves the insertion of a flexible endoscope through an incision in the vaginal wall to allow visualization and severing of a mare’s oviducts. Finally, laser ablation involves using a hysteroscope to see inside a mare’s uterus and guide a laser that will burn the opening to each oviduct, causing scarring that should “prevent normal sperm/egg union with resultant contraception approaching 100 percent success.” See the plan for the procedure below (2015 EA, p. 24).

American Wild Horse Campaign (AWHC) joined forces with The Cloud Foundation (TCF), and Executive Director and Wild Horse Advisory Board member Ginger Kathrens (collectively the Plaintiffs). Plaintiffs filed a complaint in the Federal District Court in Oregon on August 15, 2016 to challenge the BLM’s decision to deny public access to observe and document the experiments. This challenge relied on the BLM’s blatant violation of Plaintiffs’ First Amendment rights under the U.S. Constitution. Plaintiffs also claimed that the BLM’s denial of public access affected the public’s ability to influence the BLM to promote more humane treatment of wild horses and burros as required under the Wild and Free-Roaming Horses and Burros Act (WHA).

The complaint was accompanied by Plaintiffs’ Preliminary Injunction. This filing asked the court to halt the BLM’s imminent wild horse sterilization experiments. The BLM ultimately decided to withdraw its plan for the sterilization experiments, rather than litigate the Preliminary Injunction. Therefore, this case ended in a Stipulated Voluntary Dismissal.

Now, in 2018, the BLM has chosen to move forward with similar sterilization experiments. However, this time the agency has chosen to only perform ovariectomy via colpotomy on wild mares at the agency’s corral facility in Hines, Oregon. The experiments on 100 wild mares were set to involve the staff of Colorado State University (CSU). However, after the close of the comment period on the EA, CSU withdrew from participation in the study. Without CSU, the BLM has no plan to conduct welfare observations of the mares during the procedures. This is a critical component to aiding the agency in determining whether or not the procedures are humane as required of all BLM’s wild horse management under the WHA.

In contrast to its 2016 plan, the BLM has now allowed for limited public observation. However, the provisions that the BLM has provided are extremely inadequate and still infringe on our First Amendment rights. The BLM has proposed that five people could observe from this doorway. (2018 EA, p. 27). 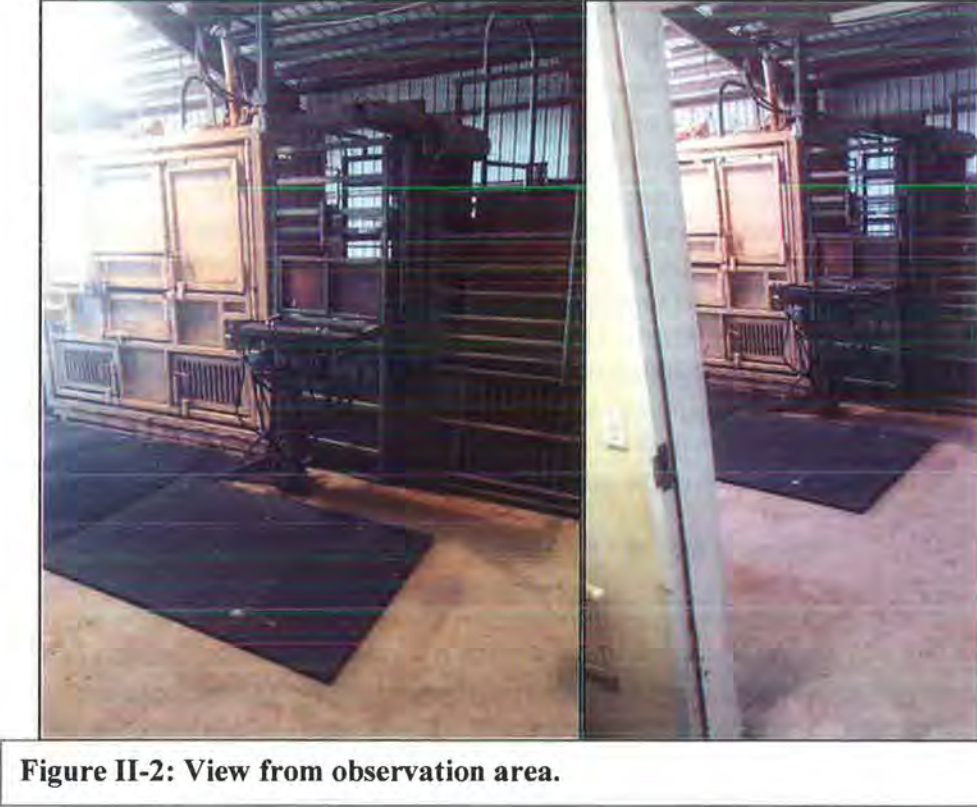 Also different in this EA, the BLM has removed the consideration of “social acceptability” without any reasoning. The agency is no longer concerned with determining whether or not the public approves of its implementing this barbaric procedure as a management tool.

AWHC has again joined forces with TCF and Ginger Kathrens for this lawsuit, and now we are also joined by the Animal Welfare Institute and Carol Walker, a wild horse photographer (collectively the Plaintiffs). On September 21, 2018 Plaintiffs filed a complaint in the Federal District Court of Oregon to challenge the BLM’s decision to seriously limit public access to observe and document these sterilization experiments.

The BLM’s imposed limitations render the limited observation effectively meaningless. From the angle of the doorway public observers will be unable to see the mares (in order to observe reactions), the procedure (as the surgeon’s back will block their view), and unable to meaningfully document the procedure in a way that would aid the public in understanding whether the mares are being treated humanely. The BLM also denied our request to have independent veterinarians observe within the surgical area, and to have small, live-stream cameras mounted in the surgical space to provide better angles of sight for the public to view the procedures.

The complaint also noted that the BLM has made this decision without any regard for determining whether these experiments are “socially acceptable” and addressed National Environmental Policy Act and WHA claims as well.

We developed this legal strategy to secure our best chance to again successfully get the BLM to abandon its plan to move forward with these barbaric experiments. The First Amendment claims brought us a favorable outcome before, and we are hopeful that we can win for our wild horses again!