The Warm Springs Roundup was conducted in October of 2018 as part of the Bureau of Land Management’s (BLM’s) planned spay experiments to be conducted on mares from this Herd Management Area (HMA). The BLM reported that 846 horses, 41 burros and 2 mules were removed (however one escaped) and 32 animals died because of the roundup operation. In response to the large number of animal deaths, AWHC submitted a Freedom of Information Act (FOIA) request to understand the reasons why so many animals died during this operation.

The responsive documents we received noted that most of the foal deaths were related to the roundup operation. For example, a three-month-old filly was dead on arrival to holding. The vet on site noted that acute head trauma during the transfer from the trap was suspected, meaning she was likely fatally trampled or kicked in the trailer. A colt also died overnight at the trap site, suspected capture shock (also known as myopathy) and a six-month-old filly was found dead on arrival at holding also suspected of capture shock. Foals were not the only victims of the operation. Sadly, a three-year-old mare, who had a weaning aged foal, crashed into a panel of the trap site and died instantly from a broken neck. It was suspected that she was trying to escape.

We also saw the unfortunate, continued misuse of euthanasia for Angular Limb Deformities (ALDs). As we have reported before, angular limb deformities include “conditions were indicated by club feet, severely overgrown hoof walls, collapsed heels, limb deformity, arthritic joints, toes pointed out at the fetlock, and lameness.” The vet recording paperwork does not require any system of rating the severity of the deformity or any scale by which the agency can determine if the deformity is severe enough to impede quality of life. Therefore, one can only assume that if no lameness is reported, and the animal was living and thriving wild and free prior to the roundup, then any euthanasia for ALDs is simply unnecessary and cruel. Many domestic horses live long lives with some of the deformities that BLM euthanizes wild horses for as they come off the range. Even wild horses have been observed by our team and coalition members usually living long and fulfilling lives with deformities such as those that BLM states as a reason why it must kill many of our federally-protected wild horses. During this roundup, horses were euthanized for ALDs such as a club foot, having a fetlock turned in, knees turned out, and even for a sway back. Again, these horses were living their lives without significant issue before this roundup operation occurred, yet now they lost their lives simply because of human intervention.

The documents we received in response to this FOIA request also illustrated a history of disregard for public input and concern about wild horse welfare during roundup operations. The responsive documents included a series of email communications between BLM employees discussing whether or not it was necessary to respond to our complaint letter about violations our field representative observed to the Comprehensive Animal Welfare Policy (CAWP), Standard Operating Procedures, and the Wild Free-Roaming Horses and Burros Act (WHA).

We sent the BLM a letter on October 8, about a week into the roundup, and expressed concern that the horses were being pushed too fast, causing young foals to fall behind and be separated from their mothers. This concern was validated in the responsive documents we received which noted foals dying from capture shock, a condition that develops when a foal is pushed past the point of exhaustion and noted that foals and mares were paired in the trap site, not always with the correct pairings. In fact, one vet noted that a filly was paired with a dun mare, but that they were unlikely related.

The internal email discussions about our letter concluded that our letter did not warrant a response. However, a response was discussed.

The employees even shared a canned response that a BLM office in Nevada had approved by the Washington, D.C. office after we sent a similar complaint letter to that office during a recent roundup that exhibited similar violations. We never received that response to that letter either. 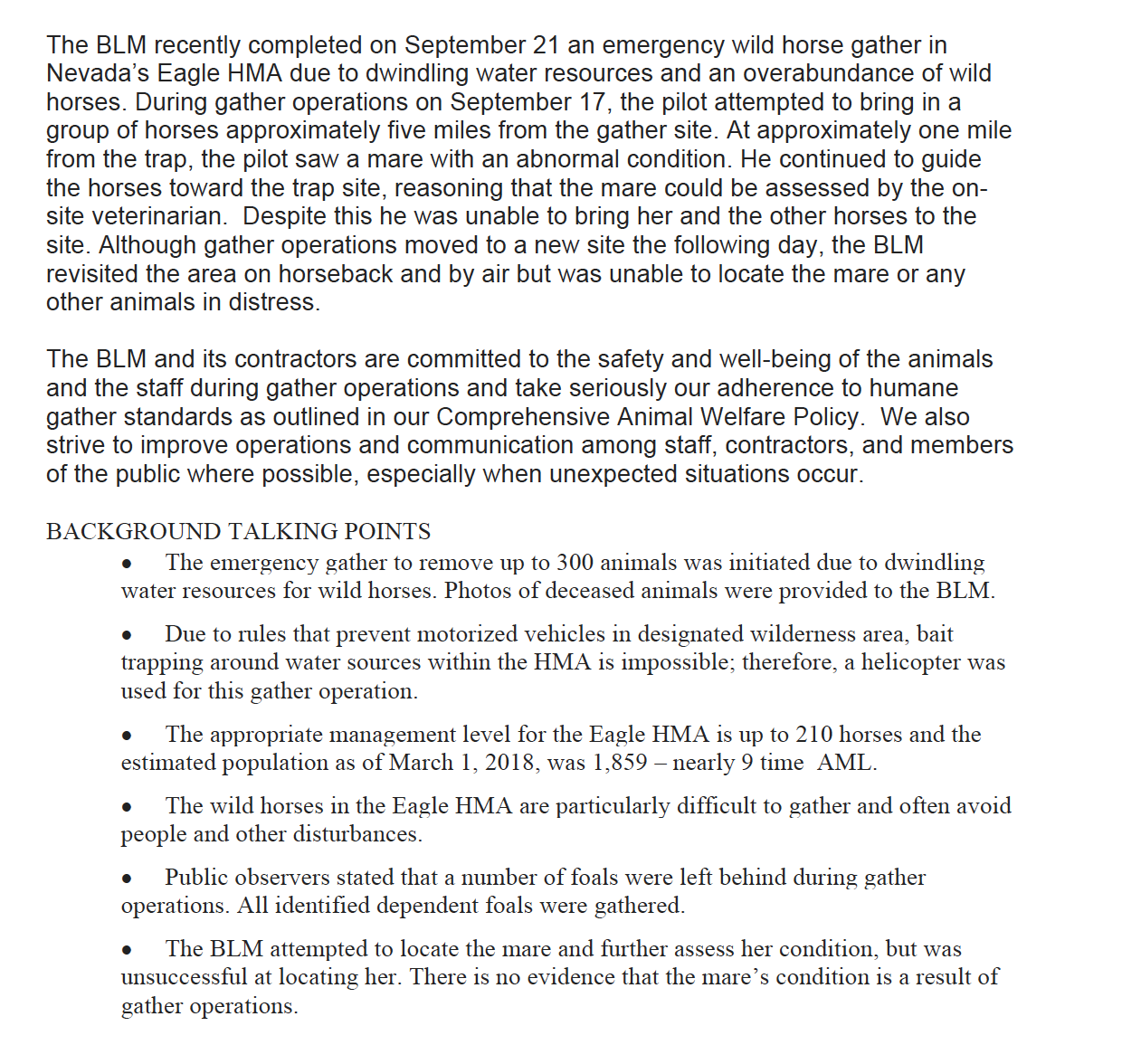 The BLM’s disregard for our concerns, which are validated by the records we received from this FOIA request, demonstrates why this system of “management” is broken and incredibly harmful to our federally-protected wild horses and burros. The BLM refuses to engage with the public, further demonstrating a refusal to be transparent in how our wild horses and burros are being managed and how our tax dollars are being spent on this mismanagement.

On the vet forms included in the responsive documents to this FOIA request, the vets have a section where they can provide suggestions for how the Animal and Plant Health Inspection Service (the agency that the vets originate from, APHIS) can do differently to better assist the BLM’s Wild Horse and Burro Program. One vet suggested that the vet boxes include a foal kit that would be used to support the health of separated foals. This suggestion could have made the difference between the life and death of the foals who died at this roundup and all the roundups last summer. The kit would include a small nasogastric tube and funnel, electrolytes, and milk replacer. AWHC was shocked to learn that this kit is not currently available to the vets at the trap sites as foals are among the most vulnerable and hopes that this suggestion will be included in the future.