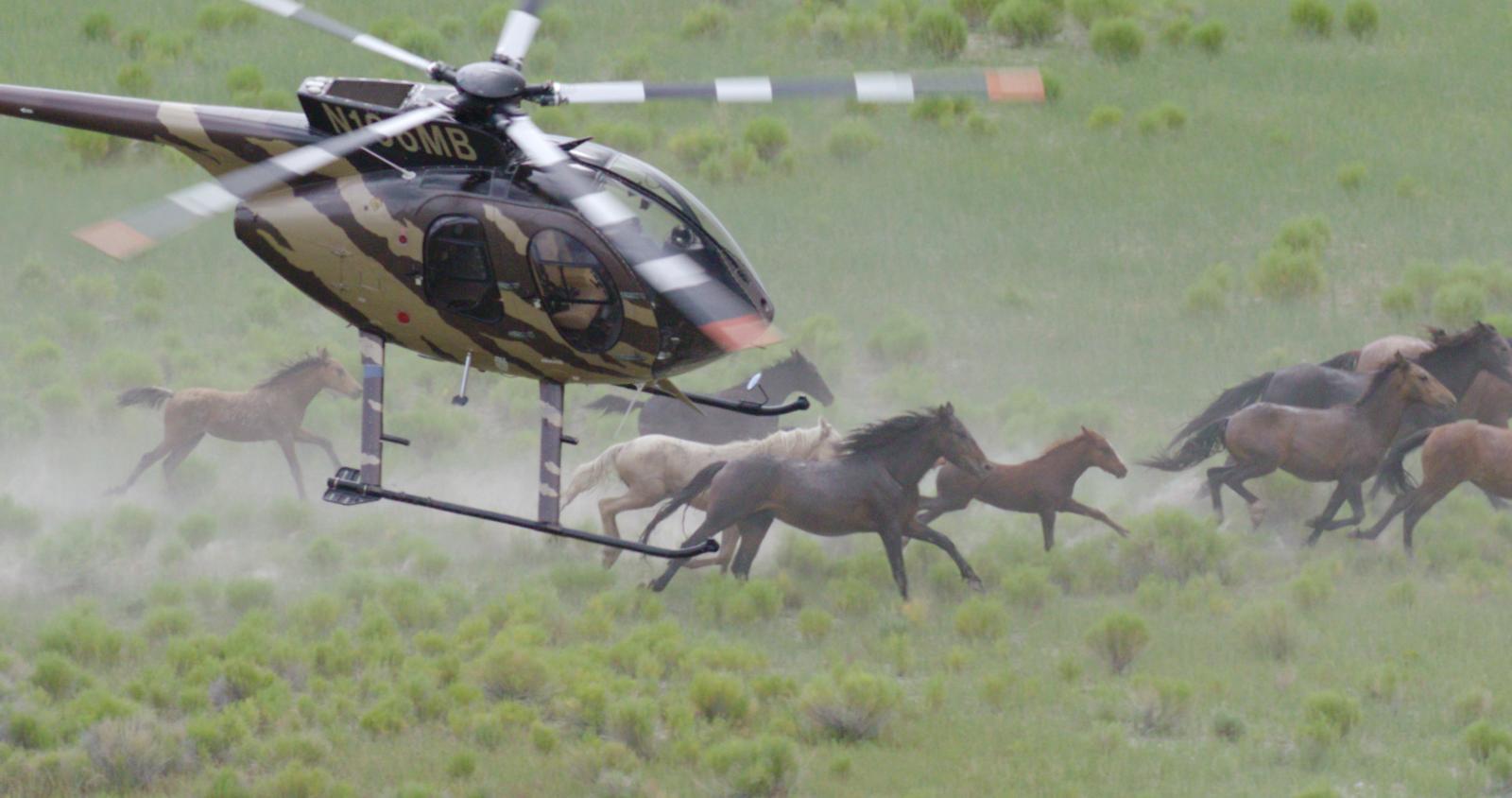 Because the BLM sets unnaturally low population limits for wild horses to maximize public land available for private, taxpayer-subsidized livestock grazing, they opt to drive thousands of wild horses from their homes and into incarceration each year.

Roundup (n): The taxpayer-funded government act of utilizing low-flying helicopters to stampede and brutally tear America's wild horses away from their native homes and chase them into lifelong confinement, resulting in thousands of wild horses and burros losing their freedom, and increasingly, their lives.

Have you ever heard a helicopter circling overhead? Even at a distance, the steady thunder of the blades incites a primal fear. It's a sound well known in war zones. Stand within yards of the landing zone, and you are overcome by the brute force of the machine as blasts of wind and overpowering noise fill the air.

Now, imagine not knowing what a helicopter is. You live peacefully in the high desert – a prey animal with acute senses. Then all at once, inexplicably, a relentless creature in the sky stalks, chases, and pursues you as you stumble through the landscape in terror.

In every roundup, terrified horses are separated from their family groups, loaded onto trailers, and trucked to holding. Anxious mares call out to their foals and stallions injure themselves trying to defend or reunite with their families. Foal drop from exhaustion and often die in holding. Some horses are killed or injured. Of those, a few are regularly euthanized due to injuries incurred during the roundup.

Mass removals act as a catalyst for a phenomenon called compensatory reproduction. Essentially, after a herd's population unnaturally plunges due to a roundup, biology dictates that birth rates will increase. The National Academy of Science states that,

“[Excessive] reliance on a removal-based management strategy could backfire because removal can lead to rapid population increases due to density-dependent compensation. Compensatory (or overcompensatory) responses to removal may be contributing to the high growth rate realized by the free-ranging horse populations in many HMAs.”

Approximately 50,000 wild horses are currently stockpiled in long-term holding facilities across the country with no place to go. As more and more mustangs are piled into captivity, the pressure to sell them for slaughter grows. The lives of tens of thousands of these innocent and iconic animals are at stake.

Needlessly warehousing healthy mustangs costs tens of millions of dollars annually for feed and maintain their meager corrals. And it doesn’t have to be this way.

There is a solution.

If overpopulation were an actual problem for wild horses on public lands, herd numbers could be managed with humane, cost-effective fertility control programs using protocol from our Virginia Range program.