The start date for the roundup in the Pine Nut Mountains Herd Management Area (HMA) begins on Thursday, Feb. 7, delayed one day by snow and ice in the northern Nevada region. The BLM's Carson City District intends to remove approximately 575 wild horses from the HMA as part of a 10-year plan to manage wild horses through “wild horse roundups implementation of population growth control measures, public education and outreach, habitat improvement/restoration, and monitoring protocols.”

The Pine Nut Mountains HMA consists of 95,391 BLM public lands acres, as well as 8,925 acres of a mix of both private and other public lands for a total of 104,316 acres. The BLM has established an arbitrary population limit of just 118-179 wild horses allowed to reside within the HMA.

The BLM has confirmed that this roundup will not impact the Fish Springs wild horses who live just outside of the HMA. These horses were the subject of controversy last summer when the BLM announced a plan to remove 70 wild horses from the small population. 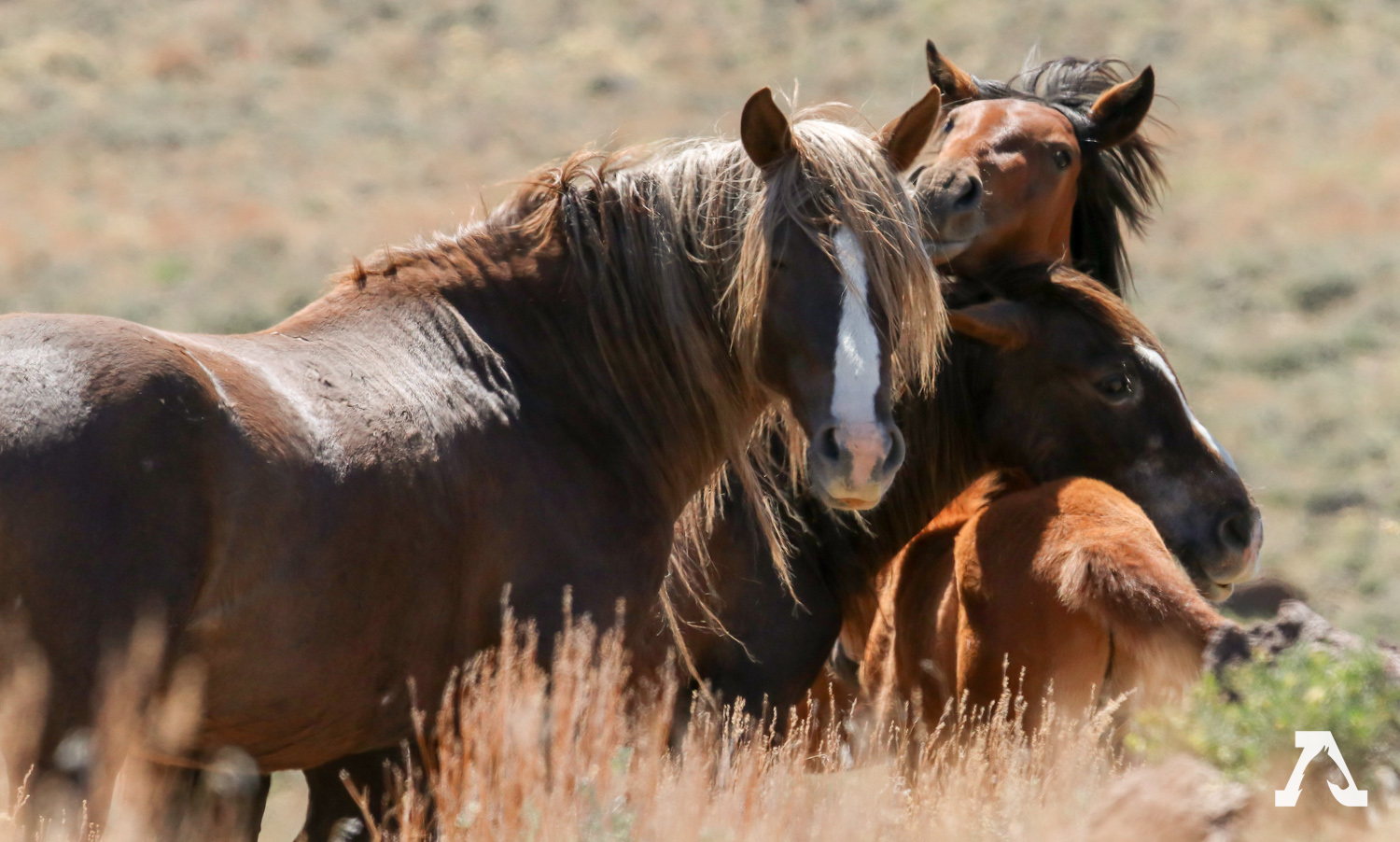 The originally designed wild horse habitat for this area (called Herd Area) consists of 251,792 acres of which 183,479 are BLM-managed lands. In 1975, the BLM identified an estimated 297 animals in the Pine Nut Mountains Herd Area (the larger area which preceded designation of the HMA). In 1982 the BLM indicated that wild horses would be eliminated from the southern portion of the Pine Nut Mountains Herd Area (aka  zero out horses) indicating that “Wild horse numbers will be totally removed, as requested, from checkerboard lands in the ….Southern Pine Nut Herd Management Area (HMA) which is less than the total HMA.” The request to zero out horses came from private land-owners. In 1986 the BLM determined that the “Appropriate Management Level” (AML), which is BLM speak for the number of horses allowed to live in the northern Herd Management Area would be 387 horses. Flash forward to 1995, the BLM revised AML for the HMA to only allow 119-179 horses.

In 2016, the BLM claimed that there are more than 357 horses inside and 222 horses outside the HMA (presumably this number has increased). Today, the majority of the horses identified as “outside” the HMA are primarily in the HA or were found on the HMA and HA border. Additionally, it’s likely that these horses travel between the HMA/HA borders without knowing, of course, of the artificial line the BLM has created. Unfortunately, the BLM does not consider the natural wild horse movement – both daily and seasonal movement – when establishing the boundaries. AWHC believes such information must be taken into account to adjust boundaries to accommodate the horses’ natural movements that are largely dependent on nutritional and water needs.

The BLM claims that the Pine Nut wild horses congregate in the northern area of the HMA and are not evenly distributed across the HMA despite there being more vegetation and water in other areas of the HMA. Often livestock grazing allotment area enclosed by perimeter fencing; AWHC questioned whether fencing was keeping horses out of certain allotments within the HMA (see map for multi-color allotment boundaries). BLM claims that fencing was not utilized in the HMA and would not be the cause for horses failing to utilize the entire HMA.

Today AWHC's field representative was one of two members of the public who watched as the BLM helicopter contractors, Sampson Livestock rounded up and removed 17 wild horses from their home on our public lands. The observation area was about a mile away from the trap site near Artesia Lake. The contractors appeared to remove all horses from the area, and are moving the trap site to a new location tomorrow.

Our observer documented band stallions stopping to fight with each other, even while being chased by the helicopter.

The BLM captured and removed 7 wild horses from the HMA today. AWHC's observer was not onsite.

The operation was canceled again today because of inclement weather.

WHC’s Field Representative was the only member of the public at the Pine Nut wild horse roundup in Nevada today.

The helicopters flew for 4 hours before the wind picked up and the BLM canceled for the day. No horses were captured, none were even seen — but there were cattle congregating around the trap site.

The operation was canceled again today because of inclement weather.

The helicopters did not fly today due to inclement weather.

The helicopters did not fly today due to inclement weather.

Yesterday the BLM rounded up and removed 22 wild horses from the Pine Nut HMA. It was the only run of the day before the roundup concluded because of high winds. Our observer traveled to the BLM's Palomino Valley Center where the recently rounded up horses were being unloaded.

Yesterday, the BLM rounded up and removed 60 wild horses in excellent condition from the Pine Nut HMA outside of Carson City, Nevada. There were 5 members of the public in attendance.

The trap site was the same as the day prior, so viewing of the horses was much better than last week. During one of the runs, our observer noticed an extremely small foal -- looking to be about a week old -- with his mother.

The mare and her foal lagged behind as they followed their band toward the trap. The mare stayed with her young foal the entire time. The helicopter pilot allowed the mare and foal to divert before being trapped. Together they moved up the mountain - now without their band. 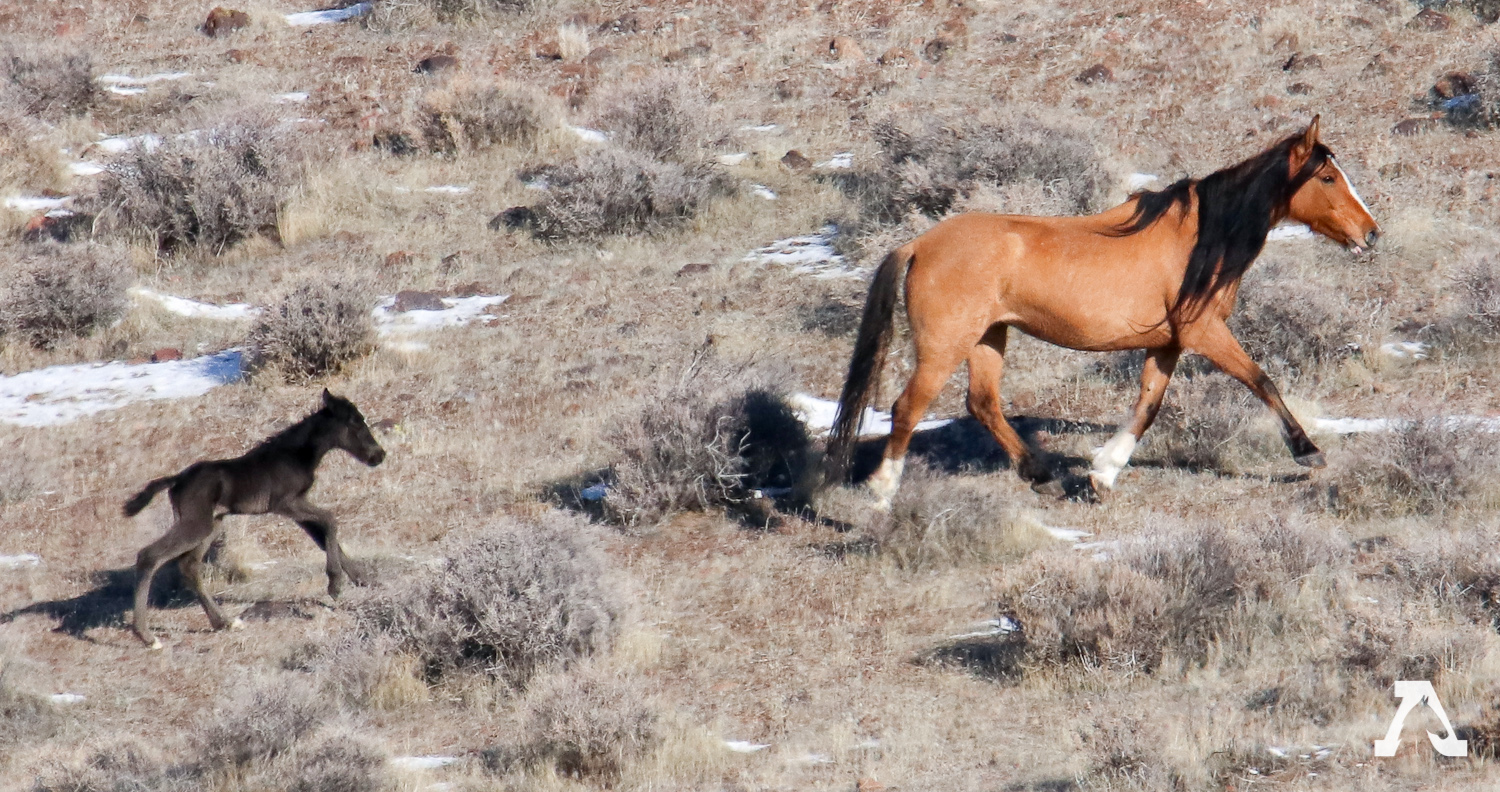 Yesterday, the weather conditions - high winds and snow - meant a late start to the roundup. The helicopter contractors moved the trap site to a new location which was about an hour and a half from our meeting location.

AWHC's field representative was the only observer on site. The contractors brought in a few very large runs of wild horses, much more than the days prior. The problems arose as those horses entered the trap site into a confined space - we witnessed extremely stressed horses. Several horses were seen falling during the panic at risk of being trampled, horses were seen climbing on top of others, and one horse, during the chaos, attempted escape from the trap only to have his leg lodge into the gate panels. After struggling to free his leg, he was able to escape. Our observer was unable to see the affected leg from his viewpoint but did watch as the horses headed back out onto public land, only able to view his sweaty upper body.

The BLM captured 105 wild horses, and there were no deaths reported.

Yesterday, the BLM rounded up and removed another 36 wild horses from the Pine Nut HMA in Nevada. AWHC field representatives were the only members of the public onsite.

Our observation area provided a very limited view, where were placed about a mile out from the trap site with continued obstruction of the mouth of the trap. After three runs of horses, the BLM called off the operation for the day due to high winds from an approaching winter storm.

We were able to view the loading of horses on the trailers to the BLM's Palomino Valley holding corrals where a portion of the horses will be prepared for adoption. Horses were visibly stressed and there was a lot of commotion. 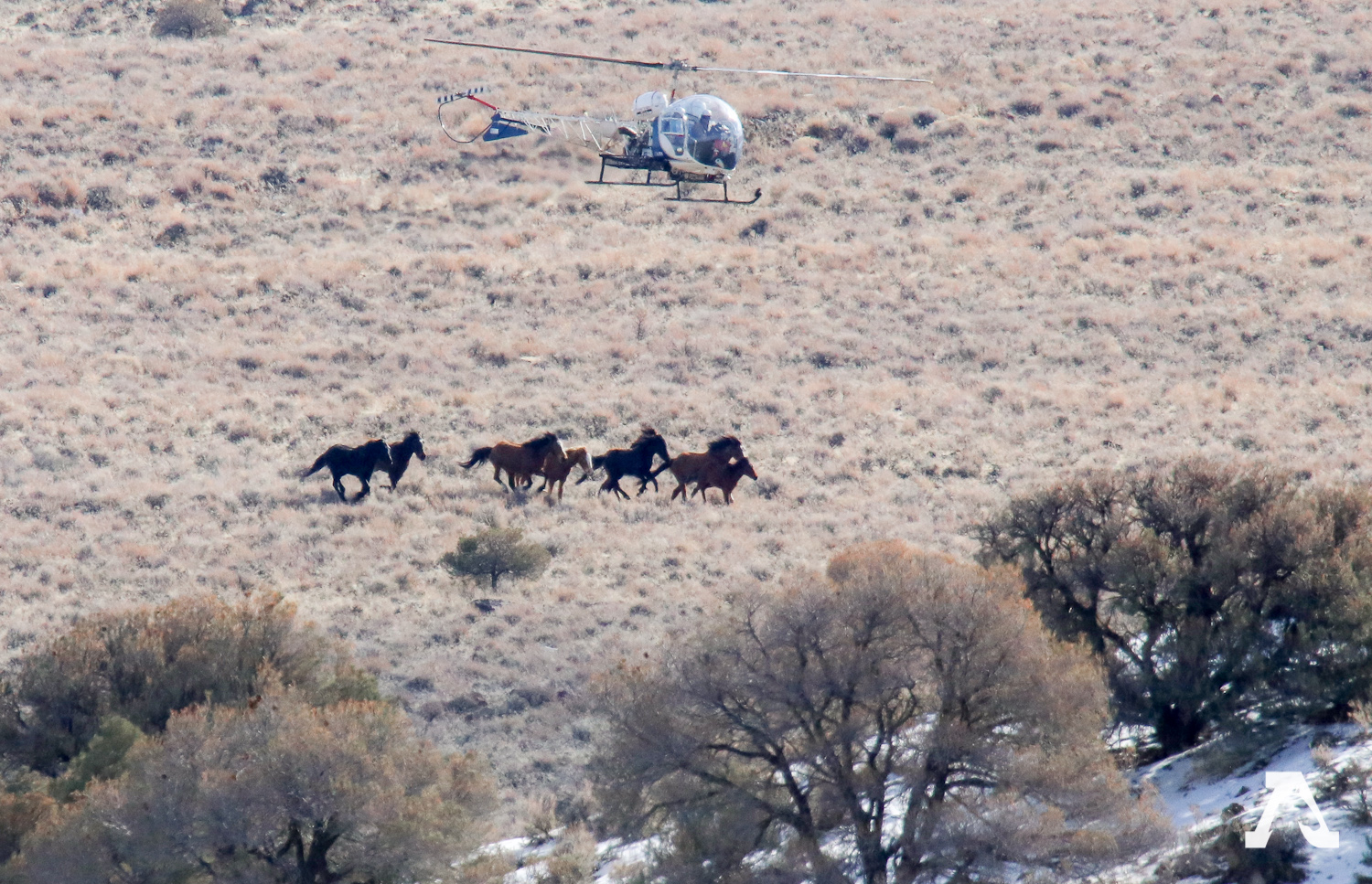 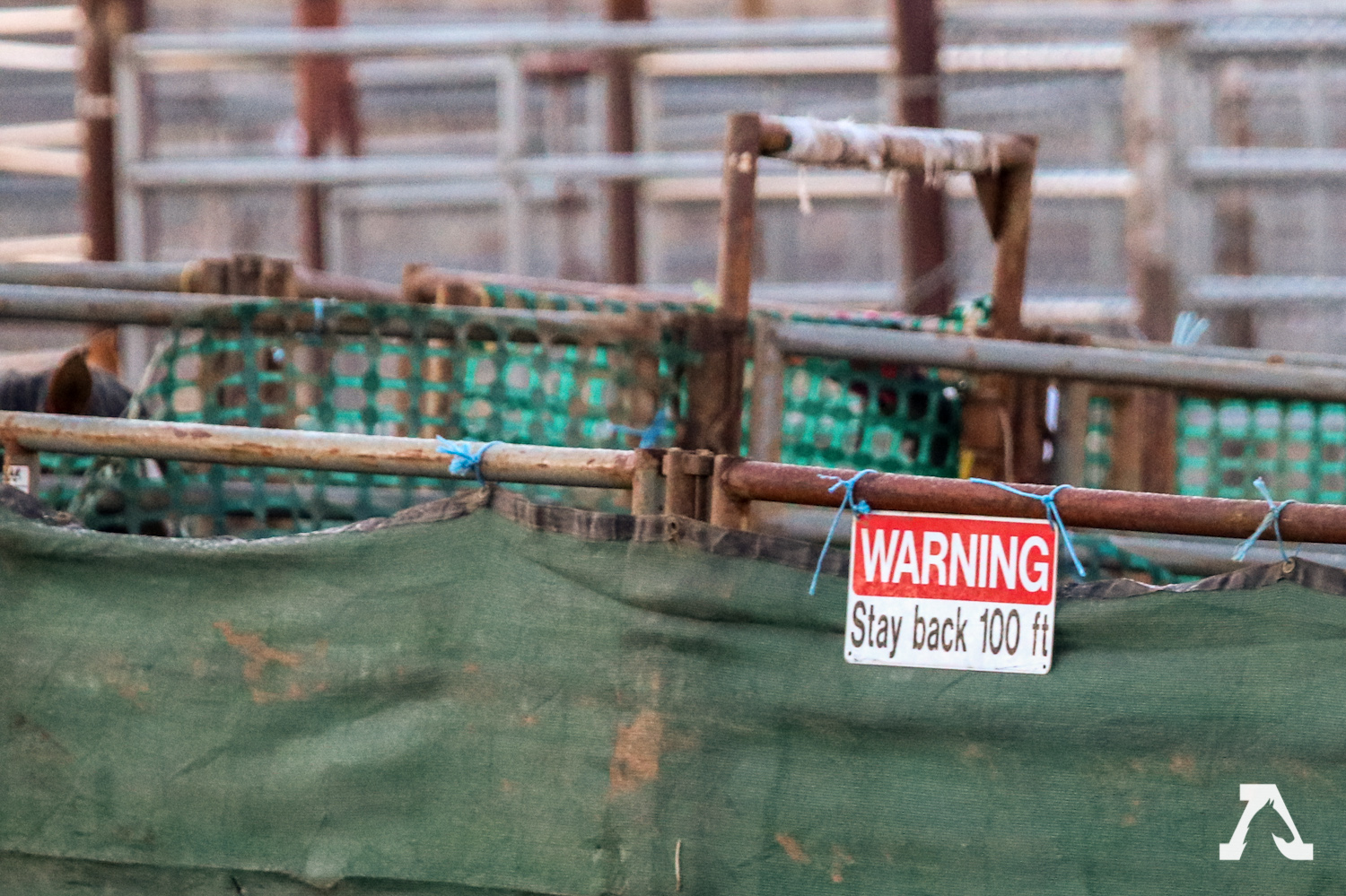 49 wild horses were rounded up and captured yesterday in the Pine Nut Mountains, and no deaths were reported. A few mustangs managed to escape the trap and scatter in all directions. Our observation location was approximately 1 mile away from the trap site and the view continued to be obstructed by the landscape. Viewing the horses at temporary holding was also very limited. 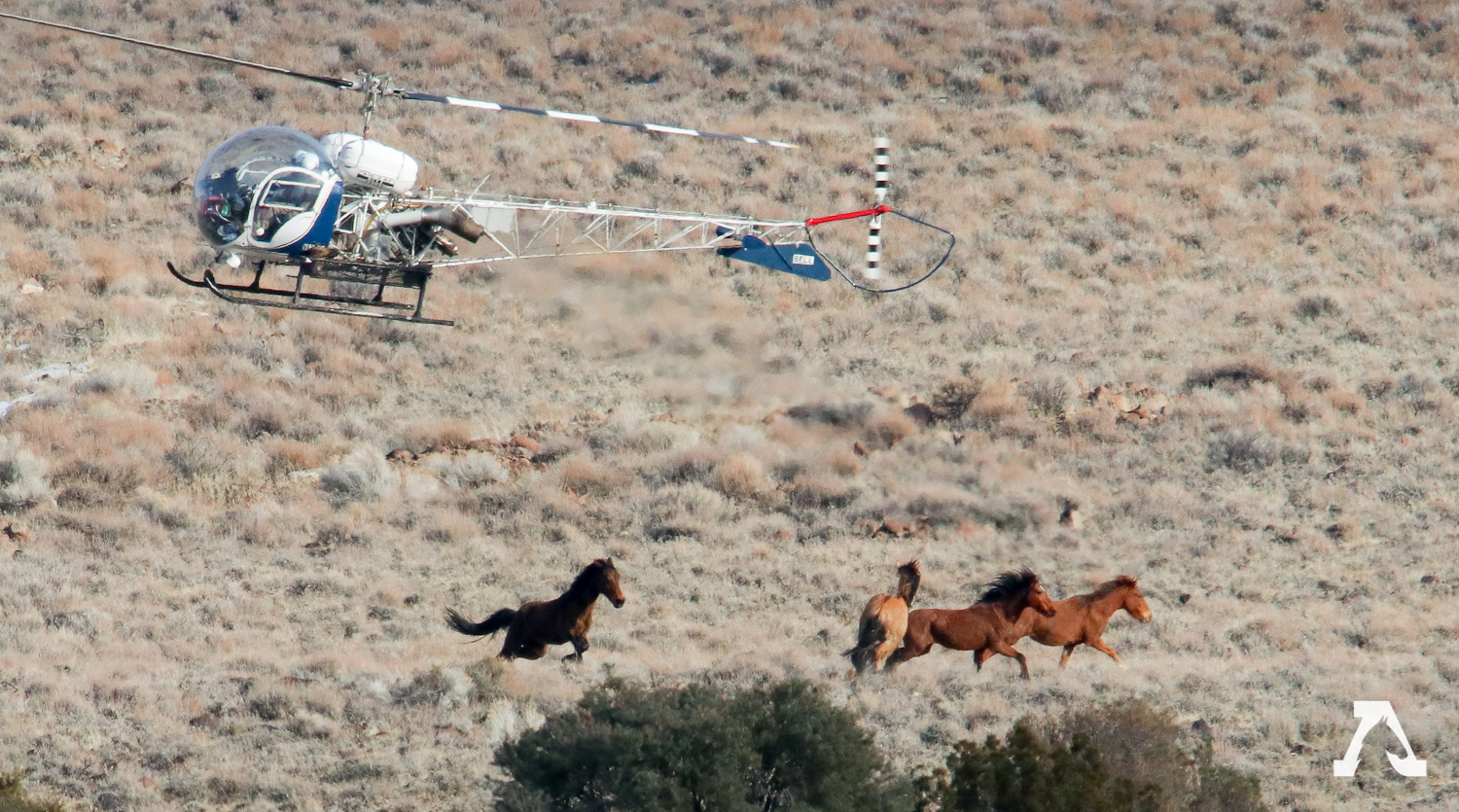 Our Field Representatives were on the ground Thursday, February 7, 2018, for the first day of Pine Nut wild horse removal. The BLM set the observation viewpoint for the public at approximately a mile from the trap site and a hill blocked the mouth of the trap. 44 wild horses were captured and no deaths were reported. While the helicopter pilot from Sampson Livestock did seem to go easier on the horses, it does not change the heartbreaking reality that these mustangs are losing their freedom and their families forever. 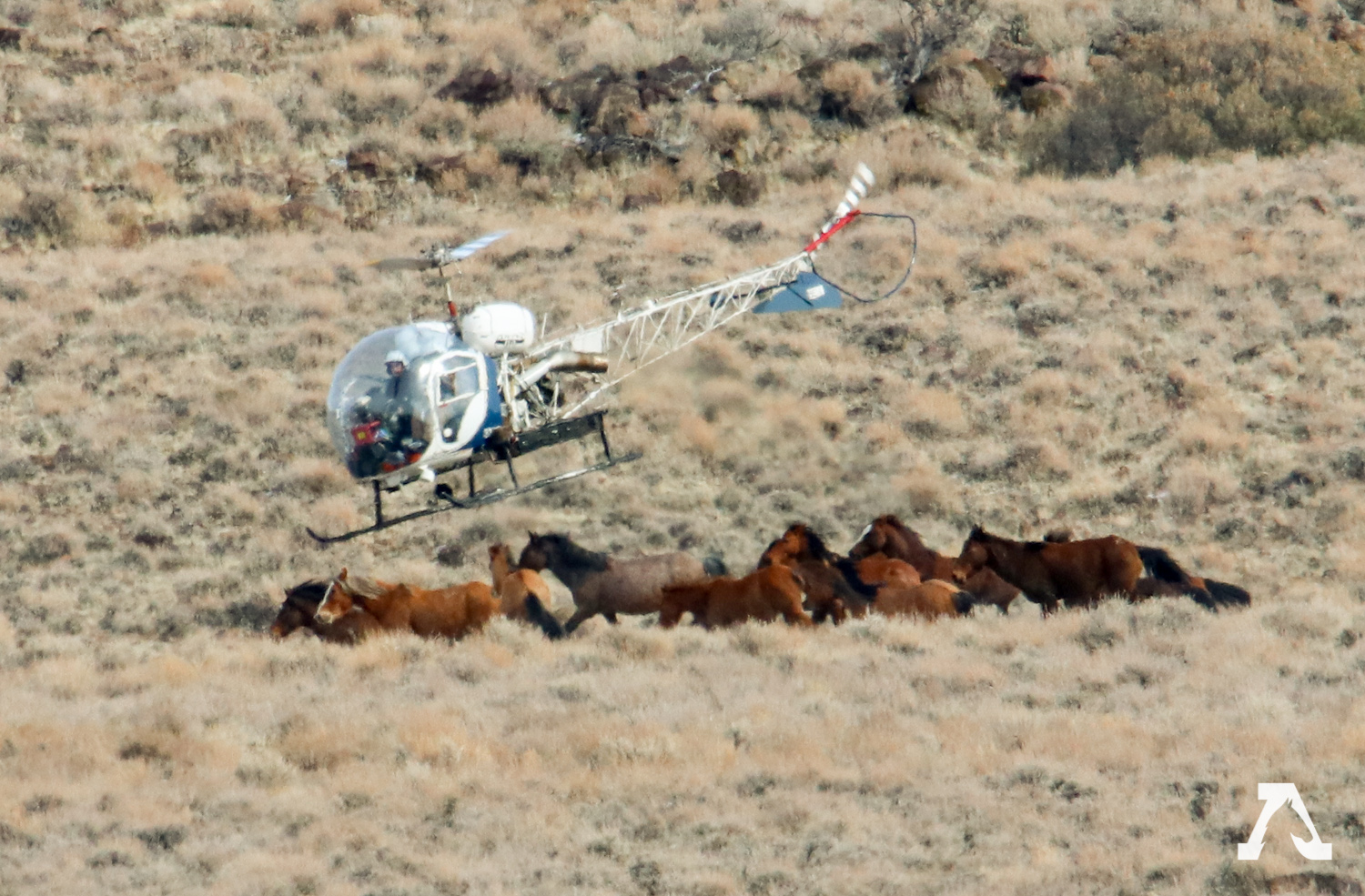