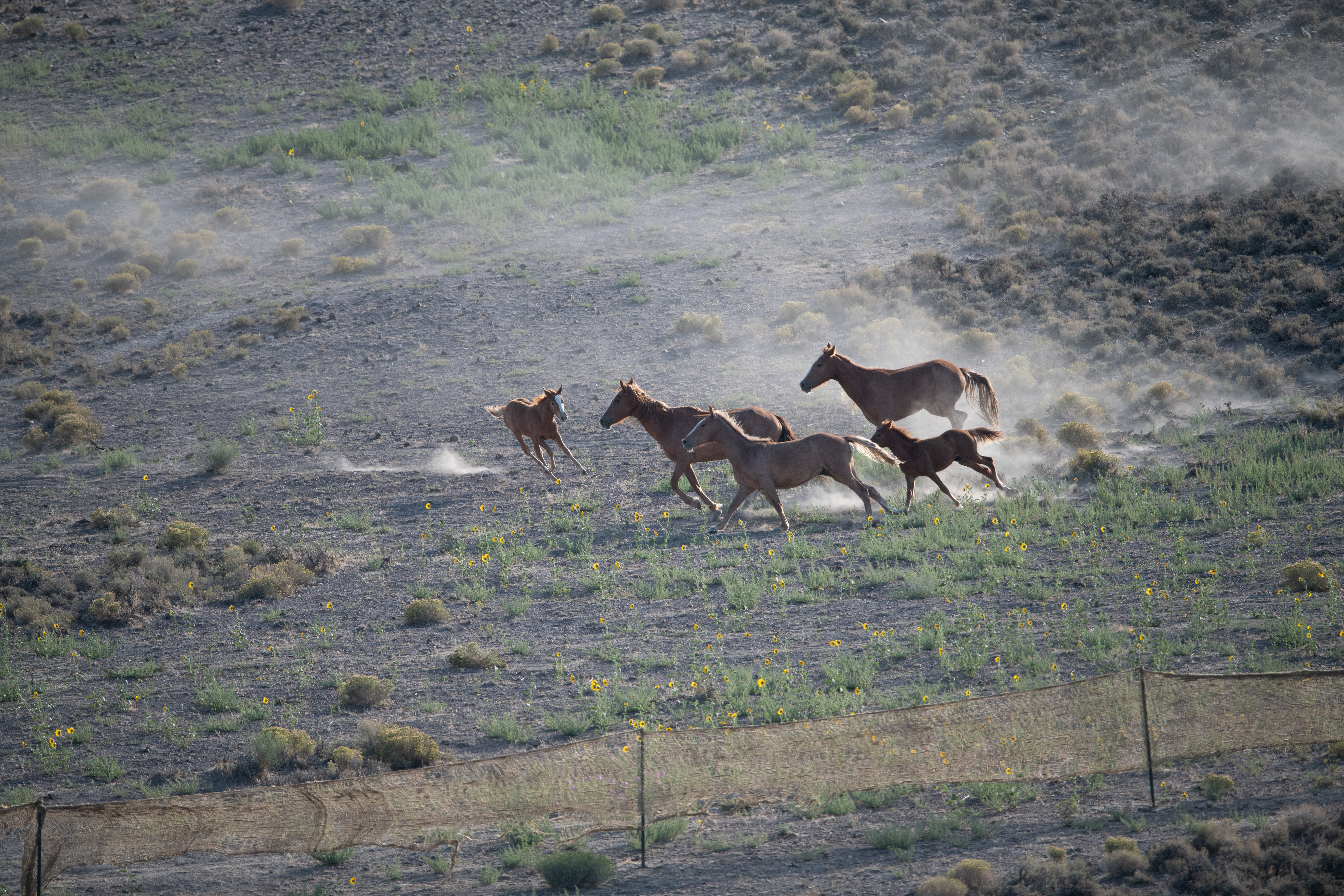 GREENWIRE | The Bureau of Land Management is planning to conduct one of its largest-ever roundup operations next week in southwestern Wyoming to remove thousands of excess wild horses from a patchwork quilt of public-private lands.

The proposed roundup and permanent removal of 3,500 wild horses from five federal herd management areas is set to begin Oct. 7 and amounts to nearly half the total 7,700 wild horses roaming federal rangelands across the Cowboy State.

A total of 4,300 horses would be captured, but 800 will be released back into the herd management areas. All mares that are returned to the range will first be treated with fertility controls.

Permanently removing the 3,500 wild horses will reduce herd populations — estimated at 5,105 animals — below the maximum number of 2,145 that BLM has determined is sustainable for both the rangelands and the horses.

The sheer size of the planned Rock Springs roundup, which has been under evaluation for years, has sparked criticism from wild horse advocates and praise from ranchers long upset about wild horses trespassing onto private lands.

The roundup is associated with a legal settlement agreed to by the Obama BLM in 2013 in order to resolve litigation filed by the Rock Springs Grazing Association.

The association's lawsuit demanded BLM remove hundreds of wild horses that were grazing on private property within a roughly 2-million-acre federal grazing allotment in southern Wyoming. The checkerboard pattern of land ownership in the region made fencing difficult, and BLM could not keep the wild horses on federal lands.

The legal settlement required BLM to analyze management changes within the HMAs at issue.

The Trump administration last year proposed, but never finalized, a plan that would have removed about 1,500 wild horses from four of the five HMAs as part of the settlement. It also would have reclassified three of the HMAs as "herd areas," which are not managed for the protection of wild horses.

Kaitlynn Glover, the National Cattlemen’s Beef Association's natural resources executive director and Public Lands Council executive director, said the planned roundup "is critical to protect not only the land, but the horses themselves."

She added: "Due to this year’s natural disasters and severe drought, excessively overstocked horse herds have stretched already limited forage and water resources past their limits. The BLM is required to adhere to stringent humane handling and environmental requirements in these gathers, and we support them using all the tools at their disposal to reduce herd numbers to a more sustainable level."

But the roundup has drawn the ire of some wild horse advocacy groups that argue there's plenty of room and resources for the 5,100 wild horses within the federal HMAs at issue.

"This massive roundup will utilize inhumane helicopter capture methods to decimate nearly 50 percent of Wyoming’s wild horse population," said Suzanne Roy, executive director of the American Wild Horse Campaign, in a statement. "This is an extreme action that demands a reasonable, common sense alternative to preserve these wild herds and humanely manage them in the wild where they belong."

The public will be allowed to observe the roundup — which will utilize helicopters to herd the animals into temporary holding pens — and daily updates detailing the number of animals removed will be posted on BLM's website.

The planned roundup is part of an ongoing effort by BLM to reduce wild horses and burros in overcrowded herd management areas down to the so-called appropriate management level, which the agency defines as the maximum number of animals the rangeland can sustain without damaging soils, vegetation and other resources.

There are currently 86,189 wild horses and burros on federal rangelands across the West. That number is more than three times the appropriate management level of 26,715.

BLM did not respond to a request for comment and information on the roundup.

But BLM said in press materials announcing the Rock Springs roundup that removing the excess animals supports the bureau's "approach to managing and protecting healthy wild horses on healthy public rangelands in balance with available water, forage, and other authorized uses of the land."

The Rock Springs roundup is not associated with a separate and ongoing BLM effort to remove as many as 6,000 wild horses and burros in drought-stricken areas through a series of "emergency gathers." Their concern is that the drought has reduced water and forage enough to raise concerns about large-scale die-offs of animals this winter.