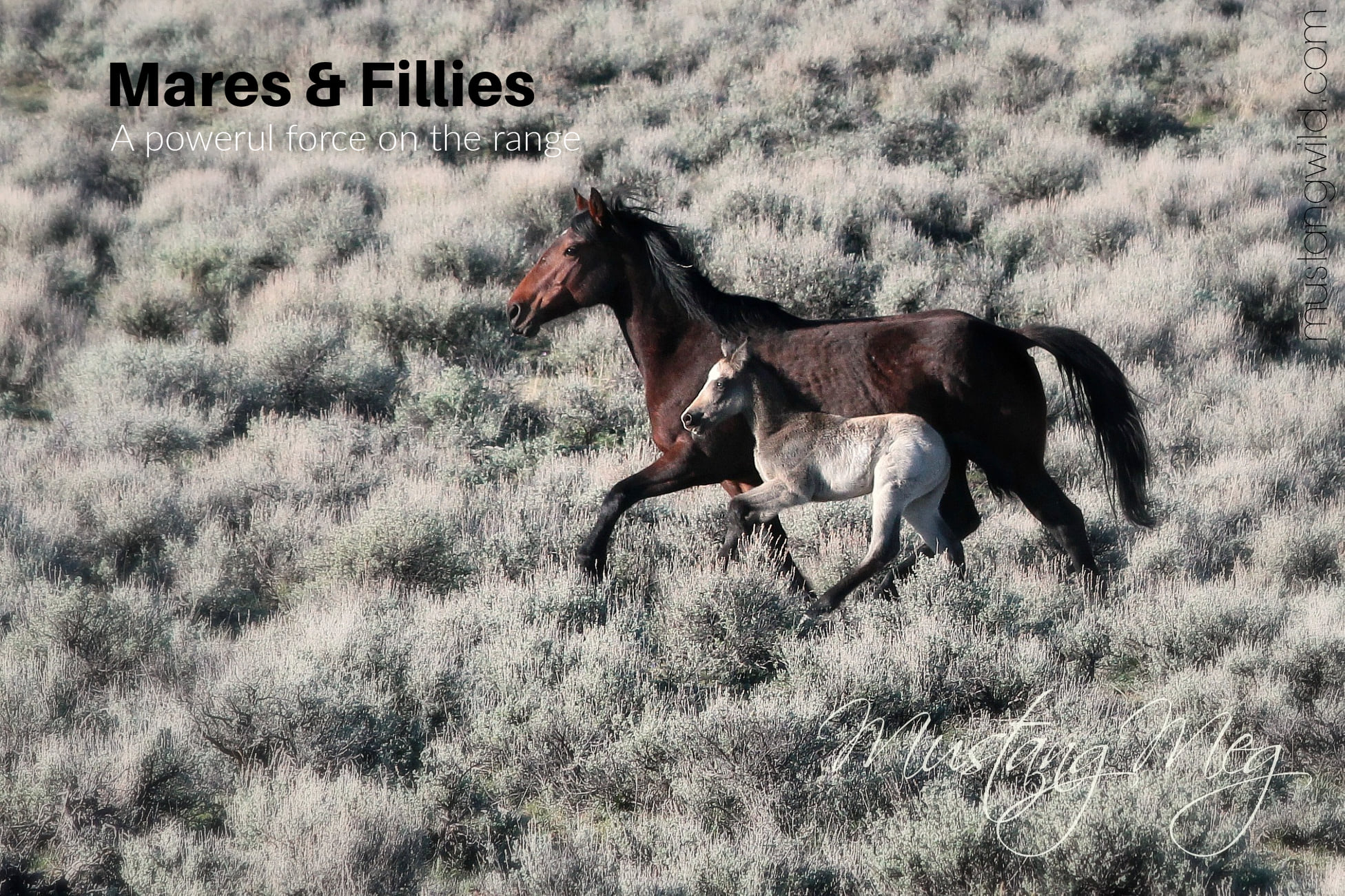 Mustang Meg: Mares and Fillies, A Powerful Force on the Range

Mustang Meg: Mares and Fillies, A Powerful Force on the Range

We often hear of the complicated world of the stallions, from young to old- they’re big, built, and showy and capture much attention. However, the feminine and graceful mares and fillies have their own roles, though more subtle to our human perception- powerful in mustang society. So subtle their influence in our limited view- yet they are that more powerful in the mustang world.
Mares and fillies rule what we call the mustang social code.

Mustang mares and fillies are both the reason for upheaval as well as cohesion in any given band. The females of a mustang family will be the reason for social network, keeping the band together, growing bonds within the hierarchy, and the band stabilizes via bonds, and grows with new foals, or comforting new fillies. On the flip side, the larger the band the more attention it gets from external males- bachelor bands and rogue stallions- causing much upheaval and change.

As mustang society has it, coming of age fillies (beginning as early as 13-15 month), become highly sociable, and at gathering areas (waterholes, mineral, and favorite forage areas), especially in the spring, a number of them tend to visit other bands and horses nearby. Many may even come into season quite early, and as we've seen Mazerati's filly, Porsche (at 15 months last Aug), walked over to another band's Lt stallion- Commander- and was bred before her band stallions collected her up and returned her to her mother). In that interlude, that stallion could have collected her up and started his own band, had it not been for her band’s two stallions coming to the rescue. (Link the story at the end).

We've also observed a receptive filly in Sox's band standing out on the outskirts of her band by herself, and Obsidian - another band's stallion- recognized the signals and walked over and bred her. Sox, her actual bandsire saw the whole thing but did not intervene. Watching, learning, reading, researching... I think when fillies are so young and in season, their own band sires do not recognize them as breeding mares as they’ve imprinted on the studs as "clacking babies" since their day of birth- Not certain - but a theory I've been formulating in my head through a number of various observations, as I've never observed a filly be bred by what we believe to be her genetic sire. But I'm also not saying that it never occurs- there is one big wide spectrum of circumstances.

The fillies come into season earlier than we thought, and what average wild horse textbooks say. In the human world it may be ‘socially bothersome’, but in the wild, Nature engineered it this way for a reason. When the mares/fillies are in season- they are especially social and a good opportunity to be bred by another, and also a time they are likely to be picked up by another band, or a rogue comes in and swipes one. Mustang society has these social codes and instinct in play that minimizes incidences of inbreeding. I've read years ago that inbreeding ‘can’ occur, but very little evidence. Dr Gus Cothran and colleagues test random herd blood/genetics post gather comparing to a baseline, and find there is little inbreeding if any issues at all. The social dynamics, driven by hormones, assures this.

The mature mares appear to be the most socially consistent out on the mustang ranges. The mares determine cohesiveness and consistency among members through bonds and social order and alliances, while stallions constantly work hard to defend, or take them from other bands. Mares will also reprimand others in the family band to keep the peace via social order maintaining the strength of a band through the established hierarchy.
While horses in general are highly social and make bonds, the mares do so creating cohesion among the band through various bonds- tending and socializing with one another and the babies, while the stallions are creating their general ruckus being boys on their own missions. In my opinion, when bands grow in size, some to 20-30 strong- mostly female-dominant family bands- it’s usually typical that it is the mares maintaining social structures and cohesion- the band stallion the “firewall”. Anything which successfully changes the structure or the dynamics- are typically external forces, such as other stallions attracted initially by olfactory signals- hormones being the driving force to change- and as a result, healthy herds by moving horses and genetics around. As a rule, the larger the band, the more it attracts a number of bachelors out of the hills, reducing a large band’s numbers- by splitting them off and claiming their own new bands. Again, good for fresh genetics- social code and order assures this.

Of course, the greater the bonds, the more the likelihood that bonded animals will find their way back to one another. We’ve seen highly bonded pairs split for whatever reason- whether by injury, or a gather-return situation- and that pair reunite. Case in point, Majesty and Chardonnay- a pair together and bonded, separated by a gather in the early 2000s and reunited post gather on their own. Chardonnay did not leave Majesty’s side, come what stallion intervened or injury, until his last breath in 2012. Most recently, a stallion and his mare reunited, after about a year where the stallion, Nevada was healing from a leg injury, where Bodacious was able to extract the mare, Cheyenne, for his own. Since, Nevada has healed, reclaimed, and the two have been reunited.

A stallion new to extracting successfully a mare or filly for his own from the band will find greater success if there is a second mare or filly for her to bond to. If there isn’t, then this stallion had better have that X-factor and figure out how to tend to her consistently until she bonds to him, otherwise, in the next social feed or watering area, she may spot her natal band or buddy she was bonded with and work her way back in, whether it be with her mother or favorite playmate, for instance. A number of times, we’ve seen a mare or filly, return and trail her previous band, with her stallion in tow. The stallion must to find a way for her to never want to leave his side, and hopefully eventually win her over permanently.

Wild natural mares have a big part in the rhythm of a band's day-to-day, as well as the necessary shifts and changes in band structures and hierarchy. They regulate daily band movement with their powerful body clock and the elders teach the young these rhythms of time and manners on the hierarchy scale. These mares were facilitating the next area to forage after water, while their stallion followed. Fascinating the wild mares are, they are both the social glue to their family band, yet also the instigator of genetic change- the reasons for stallion battles where typically, the best of the best wins the rights to guard the harem and procreate the next of incredible wild generation.

So while we often look at the obviously big and showy antics of the stallions, it’s the mares and fillies that wield the most power through both consistency, and change. ~MM

SIDE NOTE: Mares, as we know, are the driving force to many aspects of wild horse society, and it’s our duty to protect them from radical attempts to control them like farm animals- such as the threats of permanently - hormonally altering wild horses (such as spay mares or gelding stallions), and focus instead on contraception to suppress population growth.

There is a terrible threat of special interest groups to permanently sterilize/spay wild mares- changing natural herds through human, rather than natural selection, as well as changing behaviors and natural dynamics and rhythm of wild horse society.
Unforgivable heavy-handed extremism.

Protect to preserve and
Keep the WILD in our WEST!