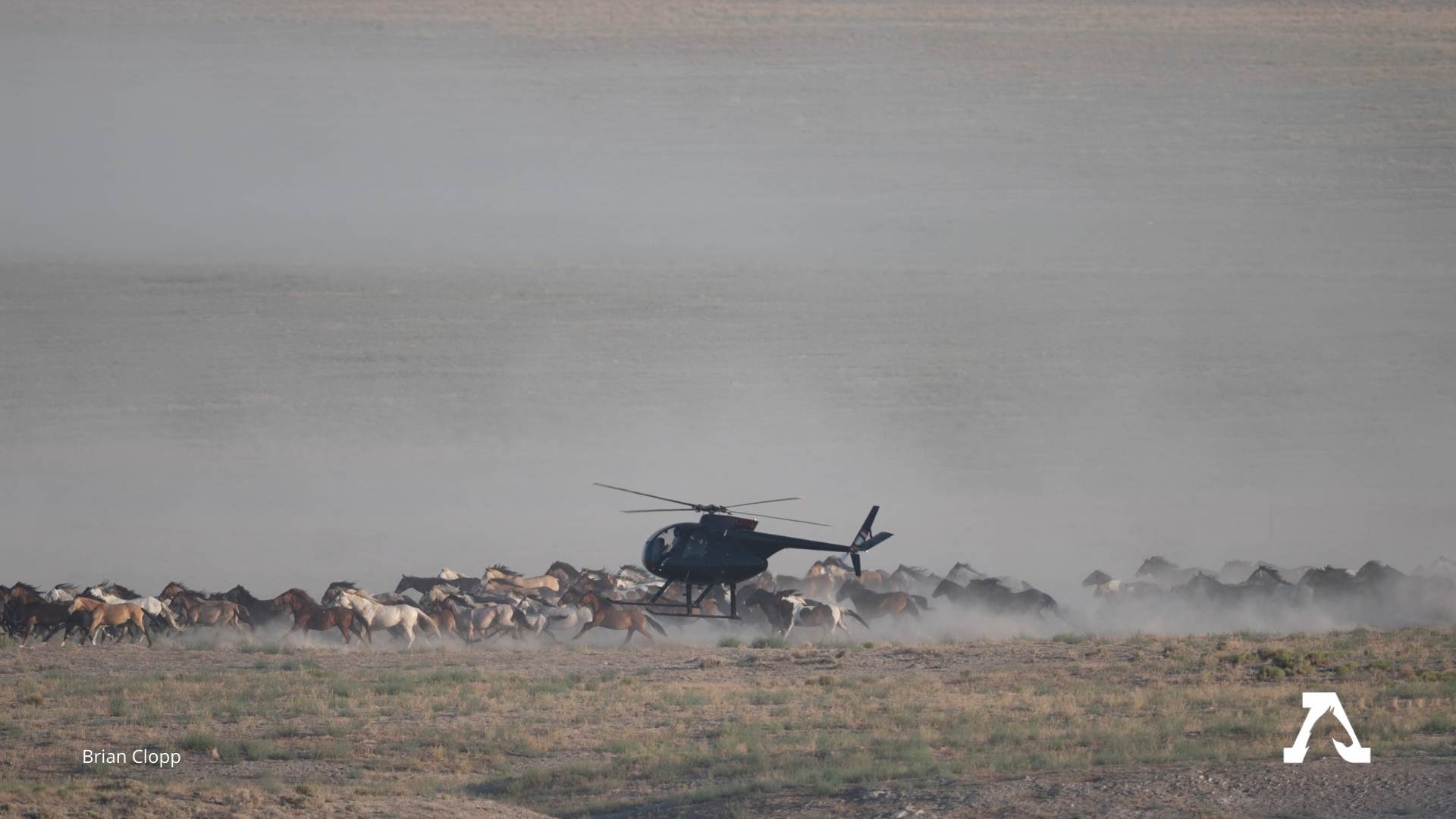 (April 25, 2022) This year, the Bureau of Land Management (BLM) and the U.S. Forest Service (Forest Service) are ramping up helicopter roundups and removals.  From videos, photos, government and advocate reports, the brutality of these operations has been well documented – horses running into barbed wire fences and breaking their legs or necks in the chaos at the trap pens, foals separated from their mares – to name a few.

The following excerpts, however, from Wayne Woolway’s petition to the Federal Aviation Administration to stop the use of helicopters for roundups offer a unique perspective on the horrific effects of helicopters on wild horses – with a special emphasis on their crushing noise levels and wild horse behavior.   (Another way to frame this is to state that these are his observations and not mention the petition.)

A retired Lieutenant Watch Commander and Command Helicopter Pilot with the Los Angeles Police Department, Wayne brings immense experience with and knowledge about horses to this issue.  This includes competing in endurance races with his horses, being a volunteer darter with the American Wild Horse Campaign’s PZP fertility control program and a member of the Technical Large Animal Rescue on the Virginia Range, and working with adopters to train wild horses. Read on! 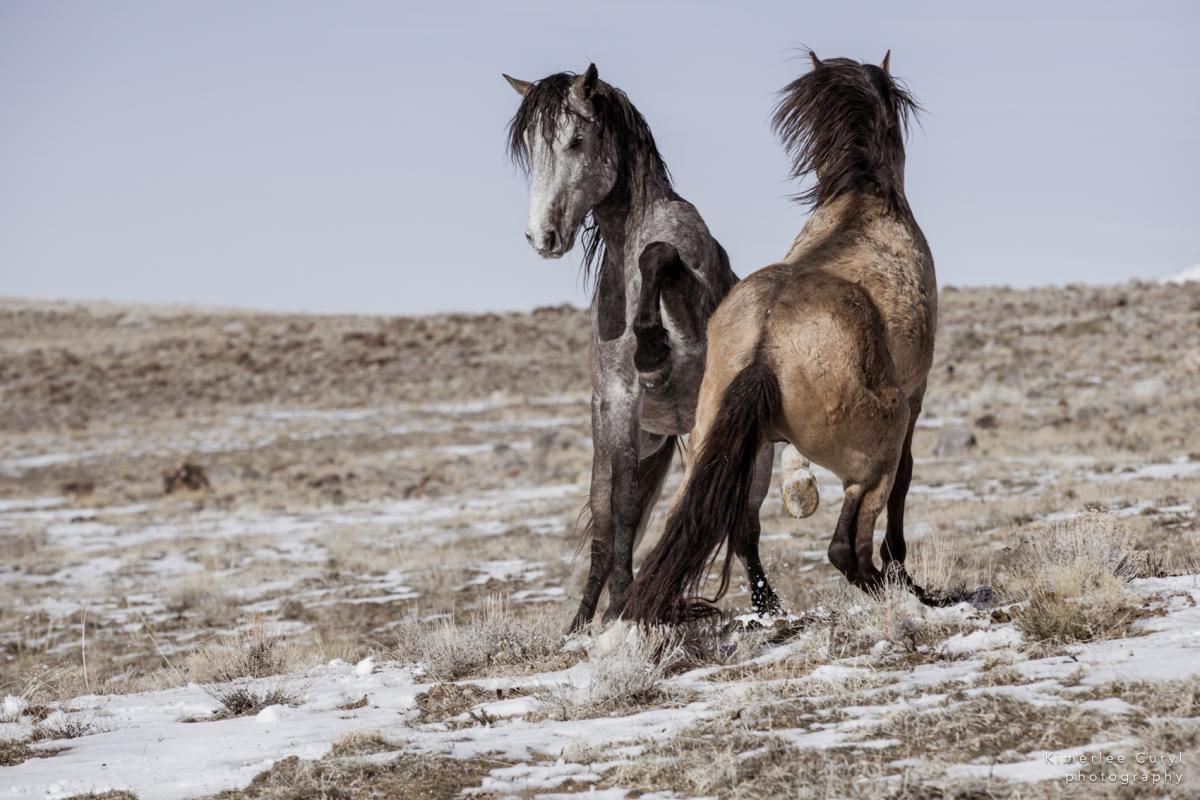 Horses are prey animals who run away from a predatory threat. They generally do not stay and fight as their defenses are limited to kicking or biting. Fleeing from threats has enabled horses to successfully exist on the planet for 65 million years.

Horses rely on their senses as they must be aware of their surroundings at all times. They have the largest eyes of any land animal and have a range of vision of approximately 350 degrees. Their hearing is also better than humans. Horses hear both lower and higher sound frequencies -- 55 hertz to 34 hertz – than humans – 64 hertz to 23 hertz.

Horses use their hearing for three primary functions: to detect sounds, determine the location of the sound, and provide sensory information that allows them to recognize the origin of the sound.

Wild horses are much more reactive than domestic horses. They normally do not attempt to evaluate a visual or auditory threat. Instead, their response is to immediately run away and put distance between them and the origin of the threat. Another survival factor is the “herd mentality.” Only one horse in the herd needs to perceive the threat; therefore, when one horse flees, the entire herd will follow. Hence, the phenomenon known as the “stampede.”

The advantage of a helicopter’s ability to take oﬀ without the need of a runway and the ability to hover comes at a cost. The mechanics are more complex, and increased noise is a byproduct. Helicopters have more sources of noise than fixed-wing aircrafts. The engine, gearbox transmission, large main rotor, and smaller tail rotor all make their own specific noise. Operational needs also result in constantly changing decibel levels and noise pitch changes.

Aerodynamic factors and hover capabilities of helicopters aﬀect the noise level produced by the engine. A “hover” requires more power than forward flight. The proximity to the ground in a hover aﬀects how much additional power is needed. More lift is created when the helicopter is hovering close to the ground. This is known as “ground eﬀect,” and occurs when the distance from the ground is less than the diameter of the main rotor. Roundup helicopters are moving in three dimensions – in and out of ground eﬀect. Therefore, the level of engine noise is constantly changing. 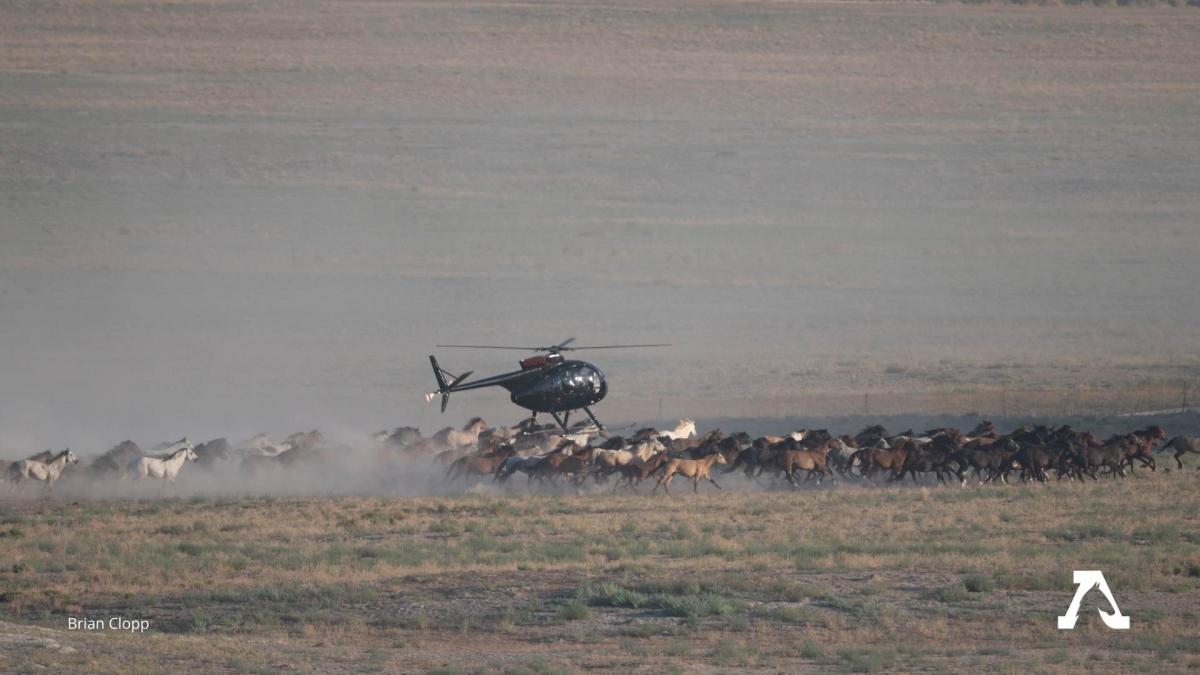 The smaller tail rotor produces a higher pitch noise than the larger, slower main rotor. Many engineering attempts have been made to reduce the significant tail rotor noise, but they are available only on very high-end, expensive helicopters that are not used on roundups.

The combination of all these noise sources is significant. However, it gets worse. Every control input made in a helicopter requires a secondary control adjustment which results in a change in power demand. Consequently, in addition to the cacophony of regular helicopter noise, the decibel levels and noise frequencies are constantly changing as the pilot maneuvers in flight.

Helicopters rank especially high in causing “undesirable” noise. Studies have found that the noise annoyance created by a helicopter does not correlate with the decibels it registers. The helicopter’s unique sound causes people to rate the sound level as much as 10 decibels higher than it actually registers, doubling the impact. Since the decibel scale is not linear, a 10-decibel increase is huge and nearly doubles the sound annoyance level. This places perceived helicopter noise at approx. 97 decibels, a whopping 30 decibels over the generally accepted noise level for residential areas.

A factor that is often overlooked is the Doppler Eﬀect. When a fixed-wing aircraft departs a runway, a bystander hears the maximum power demand placed on the engine and the increased propeller noise. As the aircraft moves down the runway and away from the bystander, the sound lessens due to a change in pitch. This is the Doppler Eﬀect. There is no lessening of sound for a horse who is trying to run away from a helicopter. The helicopter is staying in close proximity to the horse as the pilot “herds” the horse in the desired direction.

Besides the noise produced by a helicopter, the main rotor moves a tremendous amount of air downward as it produces lift. Videos of helicopter roundups clearly demonstrate the “wind” forced down upon the horses. The horses are often enveloped in “brownouts,” due to the dust storm created by the rotor blast.

As mentioned, horses are prey animals who run from perceived danger.  Let’s put ourselves in the horses’ “shoes” and try to imagine the level of predatory danger a helicopter represents.

1.) What other predator in the natural world moves in three dimensions; side-to-side,  fore-and-aft, and up-and-down?  None.

Note: Horses are especially afraid of predators who are elevated above them. A mountain lion will lay in wait on an elevated rock and jump on the horses back. A horse has no defense against this attack and running away will not work. Roundup helicopters always fly above the horses, often from the rear.

2.)   What other predator never tires and is relentless in its pursuit?  None.

3.) What other predator emits a constant, ear-splitting combination of sound that varies in decibel level and frequency? None.

4.) What other predator presents a constantly changing visual of a swaying and rotating fuselage with two separate rotor blades? None.

Note: The main rotor can change the angle and catch the reflection of the sun; It visually changes from rotating blades into a huge, shining disc. 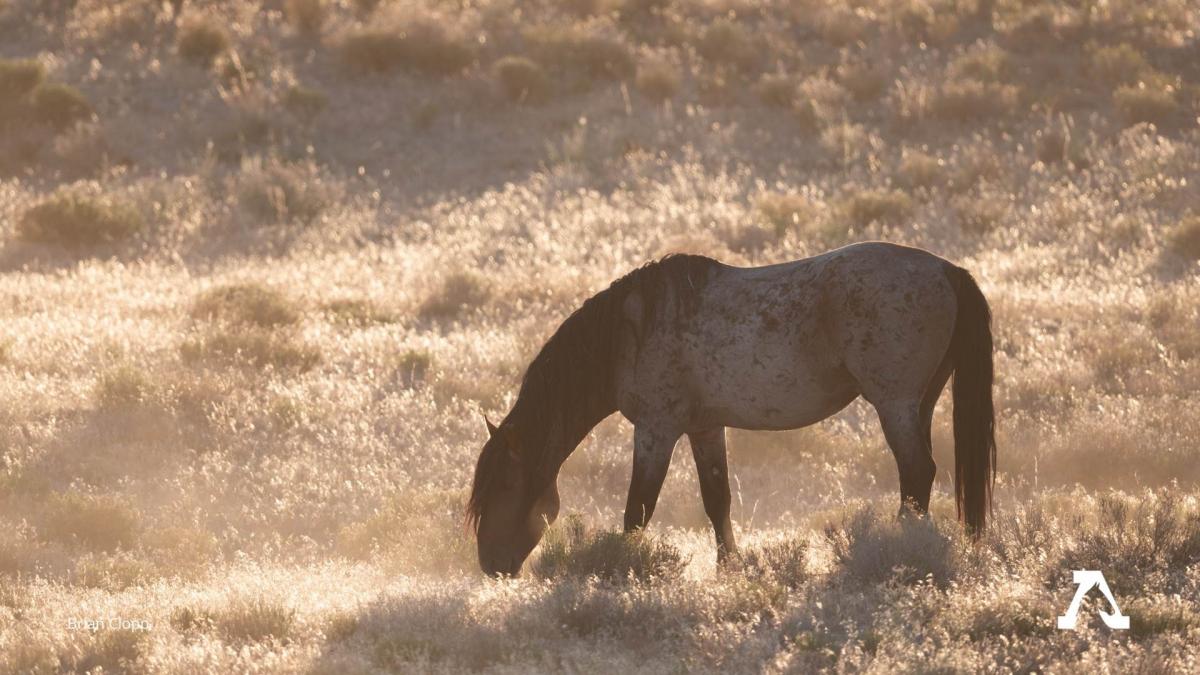 Simply stated, the rounding up of wild horses by helicopter is cruel and inhumane. Horses do not understand a man-made predator that is infinitely more terrifying than anything they encounter in their natural world. We cannot quantify the stress and fear that these horses suffer. However, we can document the tragic injuries that result directly from the use of the helicopter.  As a society, we must ask ourselves if the pain and suffering we impose on these animals is necessary and justifiable.

Our country has federal, state, and local statutes making it a crime to be cruel and inhumane to animals. Many of us find it incomprehensible that our own federal government sanctions the use of helicopter roundups by the BLM. Our government is supposed to be setting an example for its citizens and the rest of the world, not taking shortcuts for the sake of expediency.