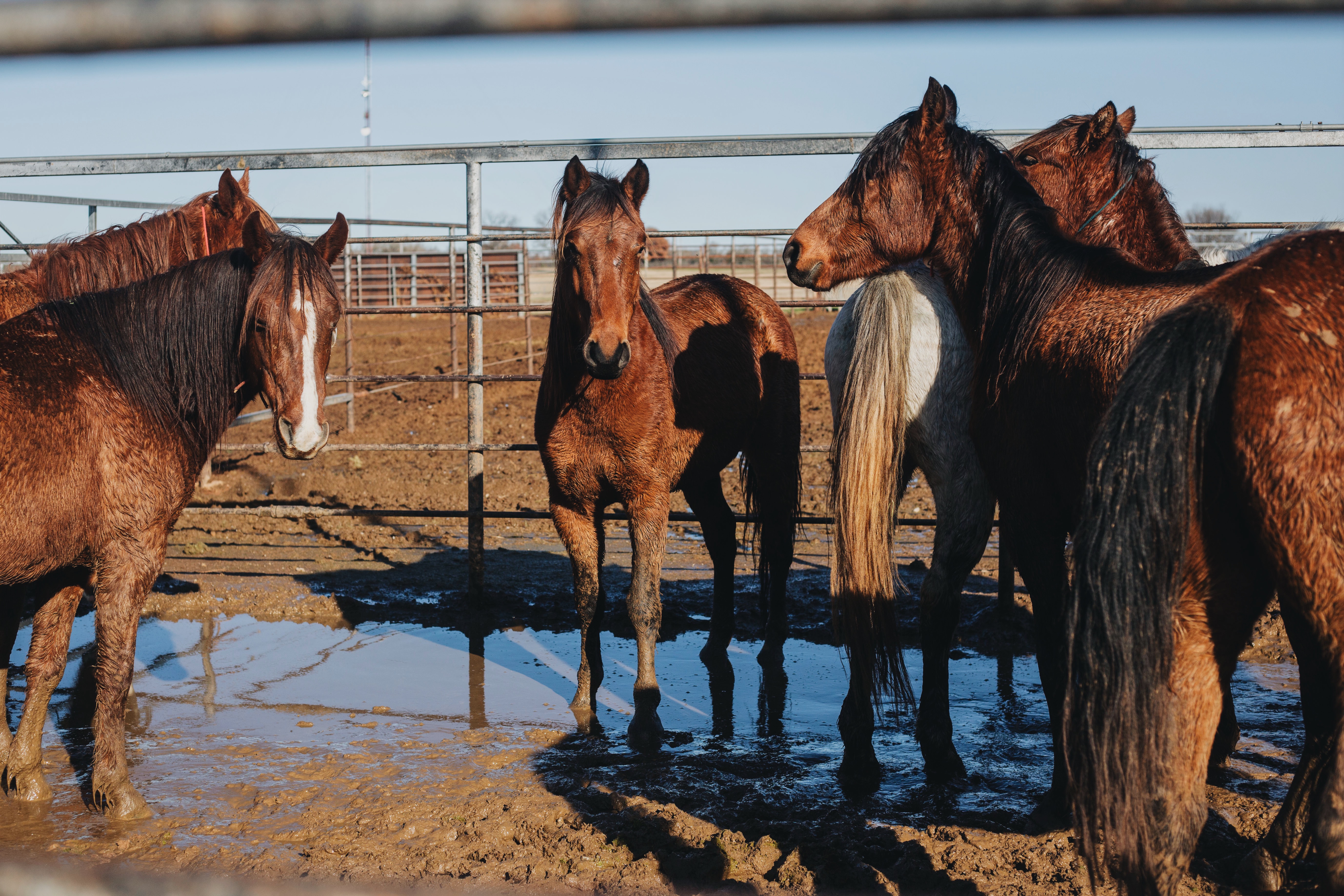 Pauls Valley Off-Range Corrals consists of 400 acres divided into 12 big pastures. It’s located right off I-35 about an hour's drive south of Oklahoma City. The Bureau of Land Management (BLM) considers these corrals a “resting point” for horses coming from the West and will go to adoption events in the central and eastern parts of the United States. The facility currently holds around 500 horses and has the capacity to hold 600. 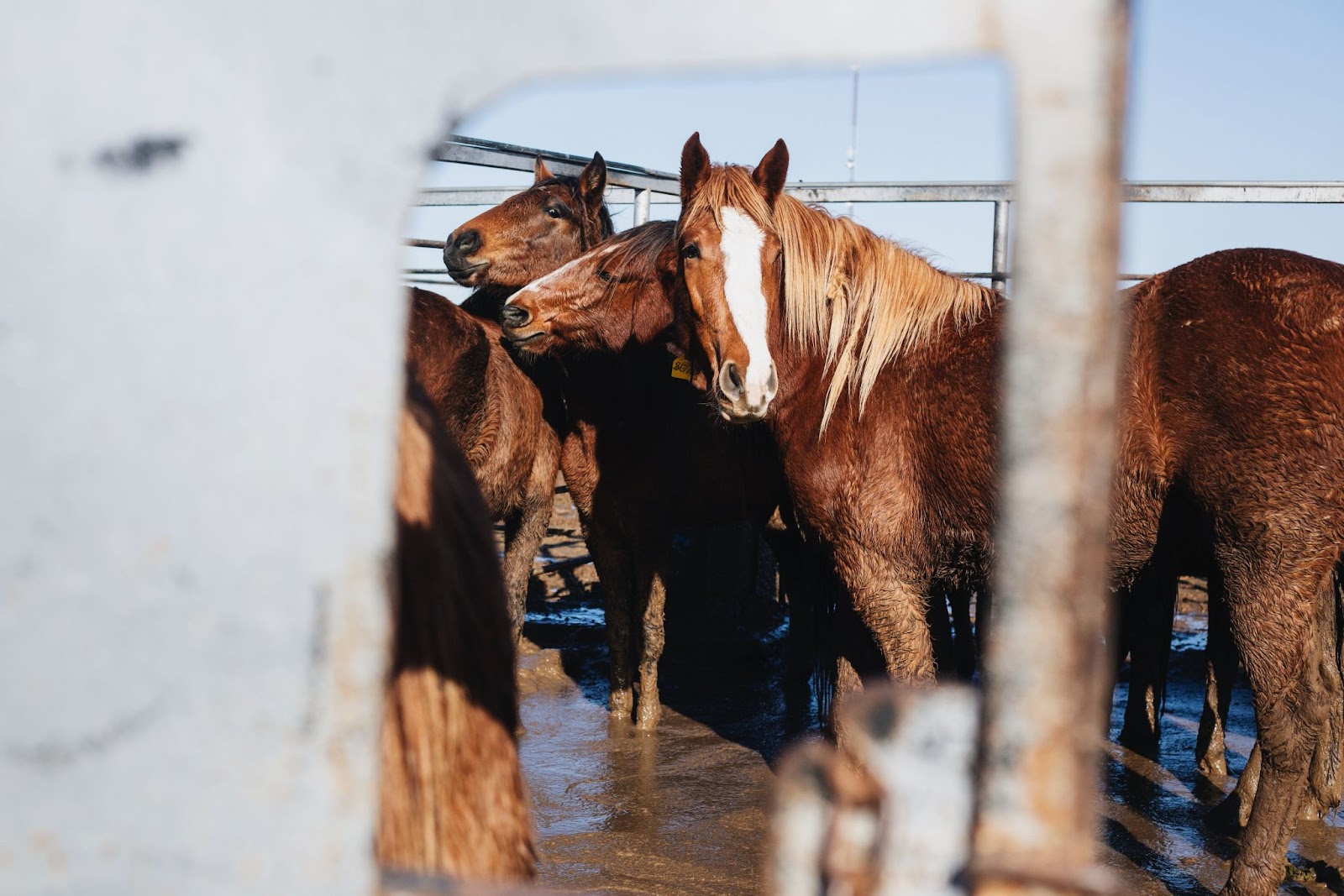 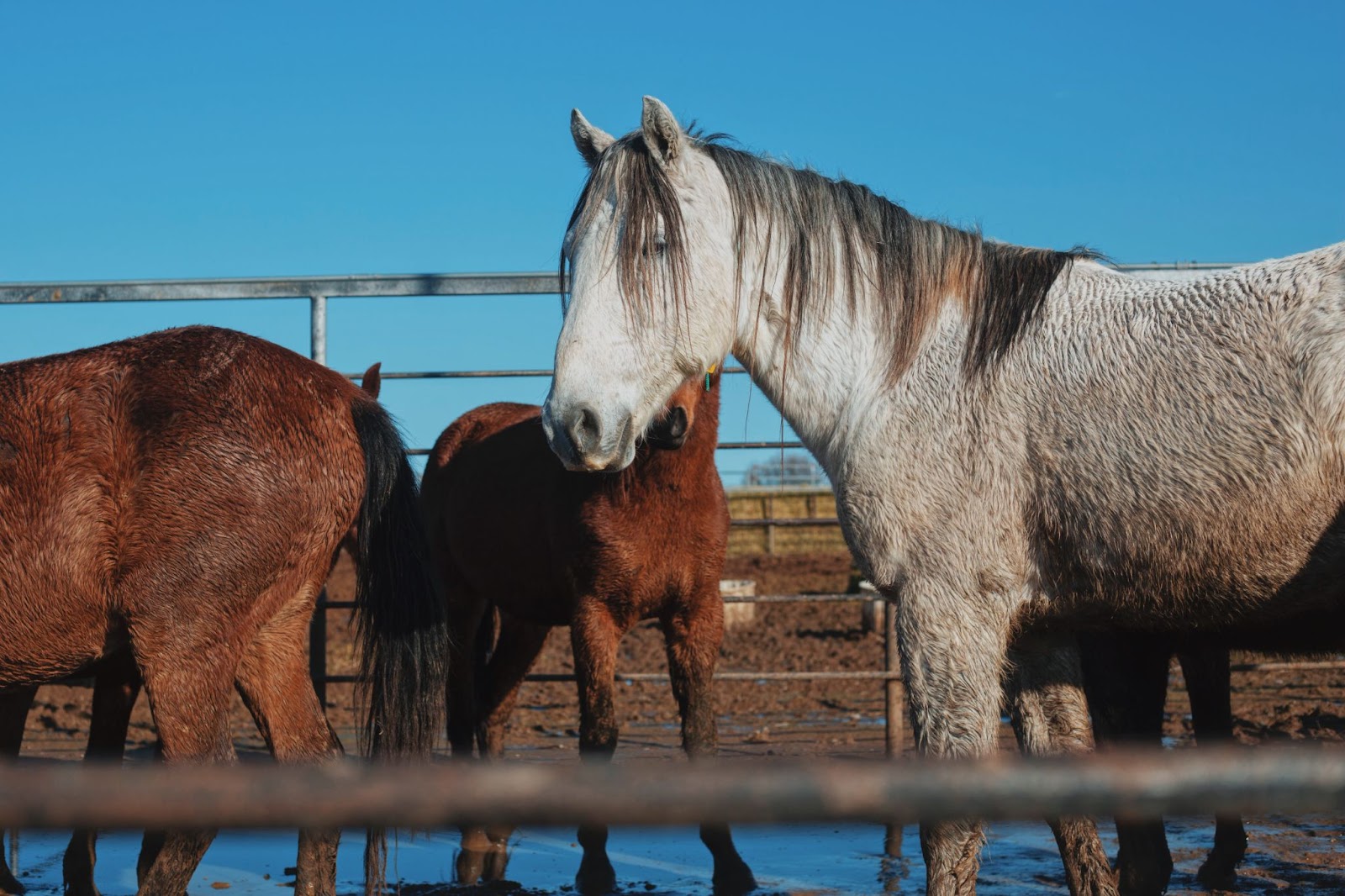 The gates opened at 8 AM, and when I drove by a little after 8 there was only one trailer on-site and very few people. I spent some time driving around the facility and checking out some of the pastures that are accessible from the road. . As seen from a satellite view on google maps all the pastures are provided with ponds as a water source. I even saw a couple of horses play and roll around in one of the ponds. 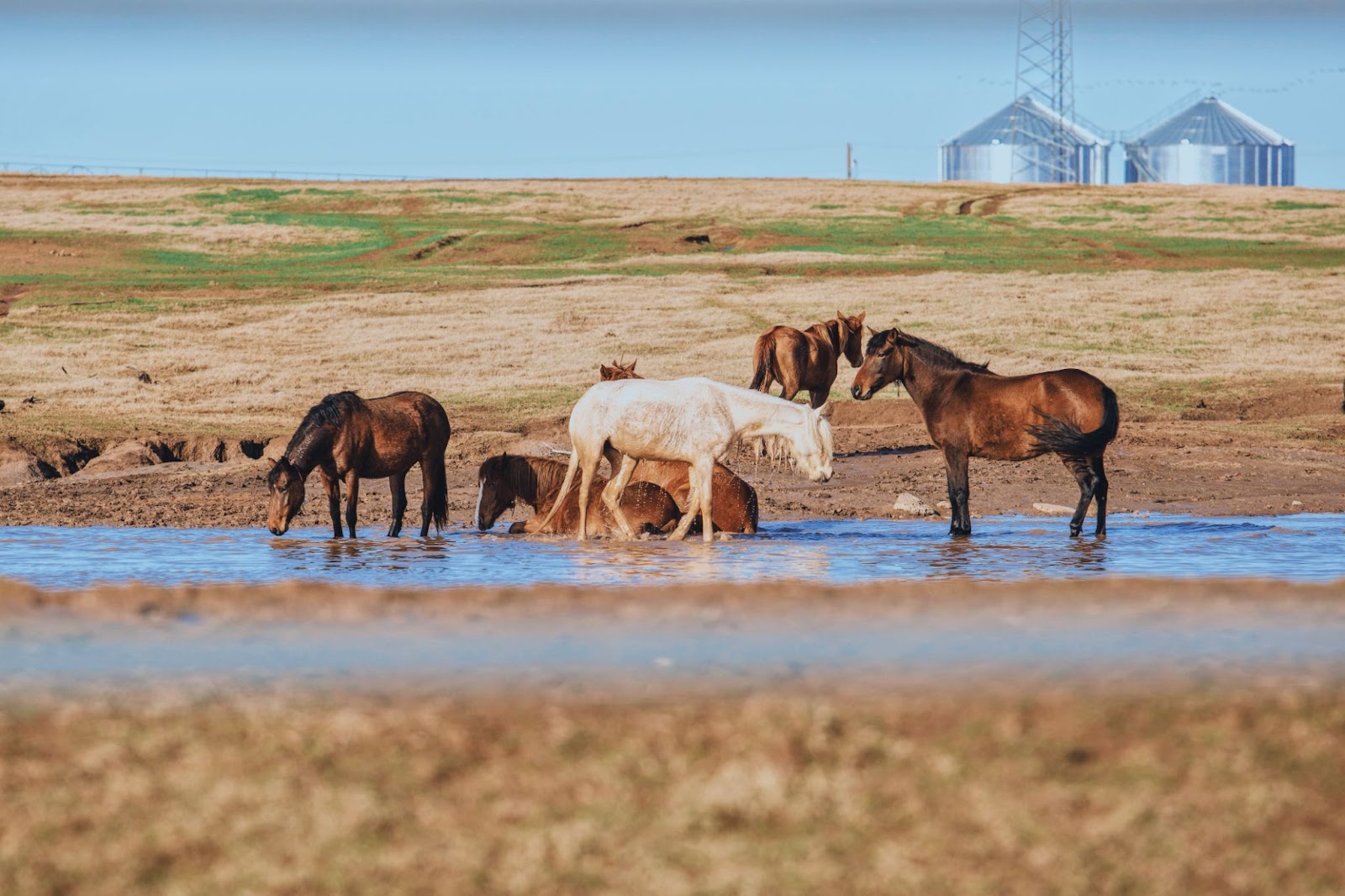 At 10 AM I returned to the holding pens and there are now only 3 trailers. When I walked up it was just the staff and only a few people looking to adopt. The adoption was about to begin and they gave us a short but detailed briefing explaining the program. 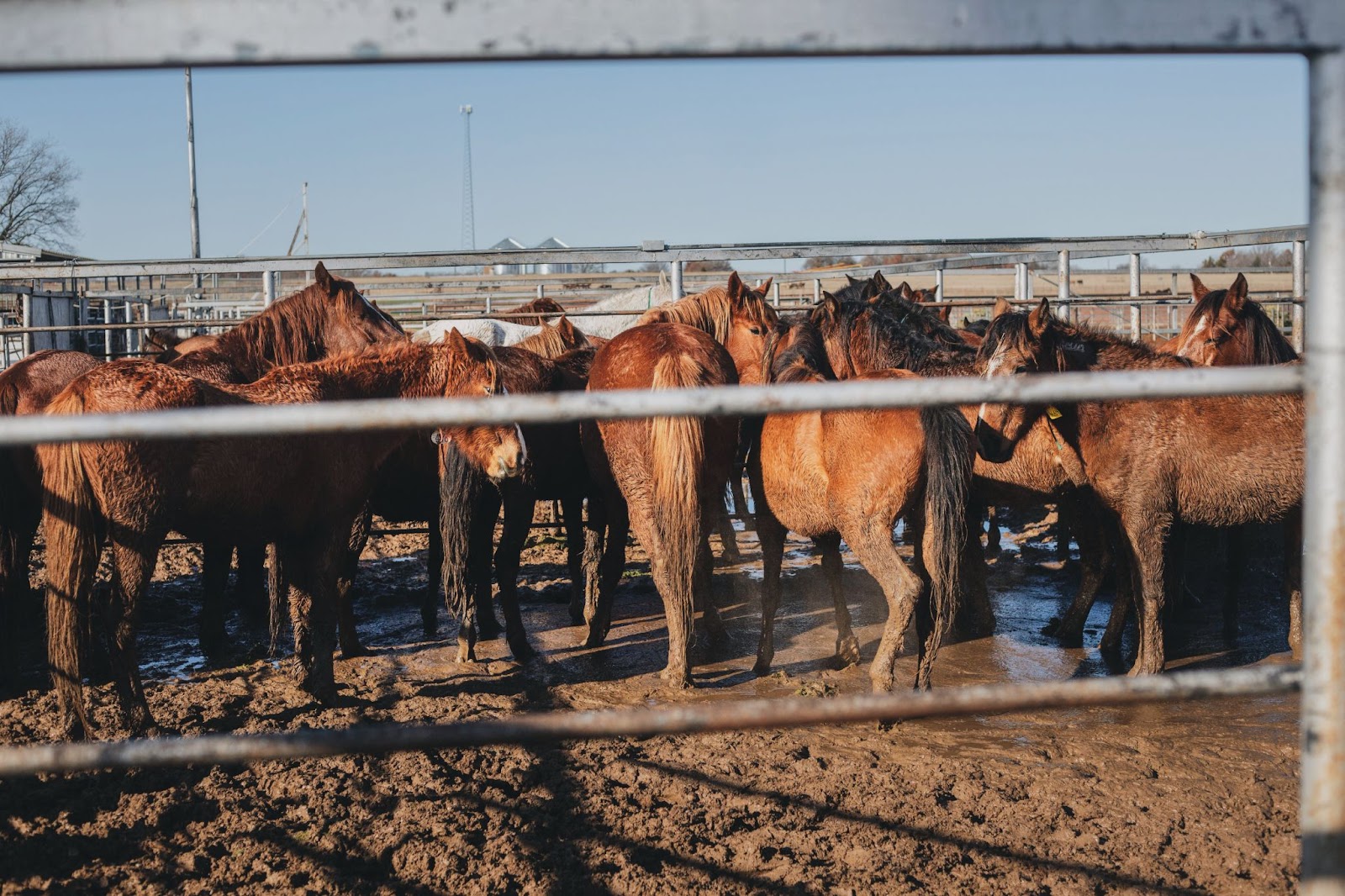 There were about 70 horses available and most of them were weanlings/yearlings and a few older horses. They were sorted the day before and brought into the pens for people to have a closer look. The pens and paddocks were very muddy but in the early morning a front with severe weather had come through and I’m sure that didn’t help the situation. I was told that horses are only kept in there temporarily for sorting and adoption events and they move them in the pastures as soon as they can because) it’s healthier.

In total, only three horses ended up getting adopted.

A note from AWHC:

There are currently 64,000 wild horses and burros stuck in government holding facilities and despite this, the BLM continues to round up and remove wild horses and burros at an accelerated pace, funneling thousands of equines into crowded holding pens with a less than viable adoption market. To breathe life back into wild horse adoptions, the BLM implemented the Adoption Incentive Program (AIP) in 2019. The AIP pays individuals $1,000 in taxpayer funds to adopt a wild, untamed horse or burro, allowing up to four animals per adopter at a time. But, abuse and controversy associated with the cash incentives have given the program a black eye. An investigation by the American Wild Horse Campaign (AWHC) found that individuals or groups of related individuals are often adopting the maximum number of animals per person, holding them for one year (the point at which title passes and the full cash incentive is paid), and then sending them into the slaughter pipeline — earning as much as $82,000 in incentives and auction fees.

Since the start of the AIP, over 1,000 wild horses and burros have been funneled to kill pens and slaughter auctions. Eyewitnesses have reported hearing adopters declare that they only adopted animals for the $1,000 incentive. In a May 2021 exposé, the New York Times reported that an AIP adopter stated, “It’s economics . . . . I can make about $800 putting a calf on my land for a year. With horses, I made $1,000, then turned around and sold them for $500.”

The burden on wild horse rescues

But, many wild horse and burro rescue operations are bearing the brunt of the BLM’s irresponsible cash incentive policy by paying extraordinarily inflated prices (or bail) to save these American icons from slaughter in foreign abattoirs. Kill buyers know that the public does not want wild horses and burros sold for commercial processing. They increase the bail to unattainable amounts, leaving privately-funded rescues scrambling to raise funds before the animals are shipped to slaughter.

There is a better way: Veterinary vouchers

The BLM’s AIP must be reformed by eliminating cash incentives and instead offering veterinary vouchers—a solution that has gained broad support from stakeholders—to offset the initial care of a wild horse or burro.

These vouchers are a win-win solution that will (1) help the BLM achieve its adoption program goals, (2) provide adopters with financial support, since all adopted animals will require veterinary care as part of responsible equine ownership, and (3) help ensure that horses and burros don't end up in the slaughter pipeline, ultimately restoring the public’s faith in the adoption program.

The BLM has significantly increased its removal operations—in Fiscal Year 2022 alone, the agency captured and confined over 19,000 wild horses and burros in already crowded holding facilities, spending over $93 million in roundup and holding costs. The AIP was intended to increase adoption rates in the face of a growing off-range population, yet it has created more problems than it solved.

Fertility control is a proven method to decrease population growth of wild horses and burros in the wild, which, over time, would reduce the need for expensive and often inhumane helicopter roundups. We can better protect equine families and reduce the need for costly, cruel roundups and a flawed federal adoption program by investing in proven fertility management solutions.

Americans are becoming aware of the problems with the AIP and the unscrupulous adopters and auction operators that profit from sending wild horses and burros into the slaughter pipeline after title passes. The irresponsible behavior of these bad actors tarnishes a program that could help the majority of captured wild horses and burros go to good homes.

Prospective adopters also need to understand what it means to take on an untamed wild horse or burro. Adoption requires serious financial resources, proper training, and equine infrastructure, such as fencing, corrals, shelter, food and water, to ensure the animal is properly cared for on its journey from a wild to a domesticated animal.

AWHC urges the BLM and Congress to—

AWHC supports and encourages the responsible adoption of wild horses and burros by responsible owners, and continues to advocate for improvements in the BLM’s Wild Horse and Burro Program.