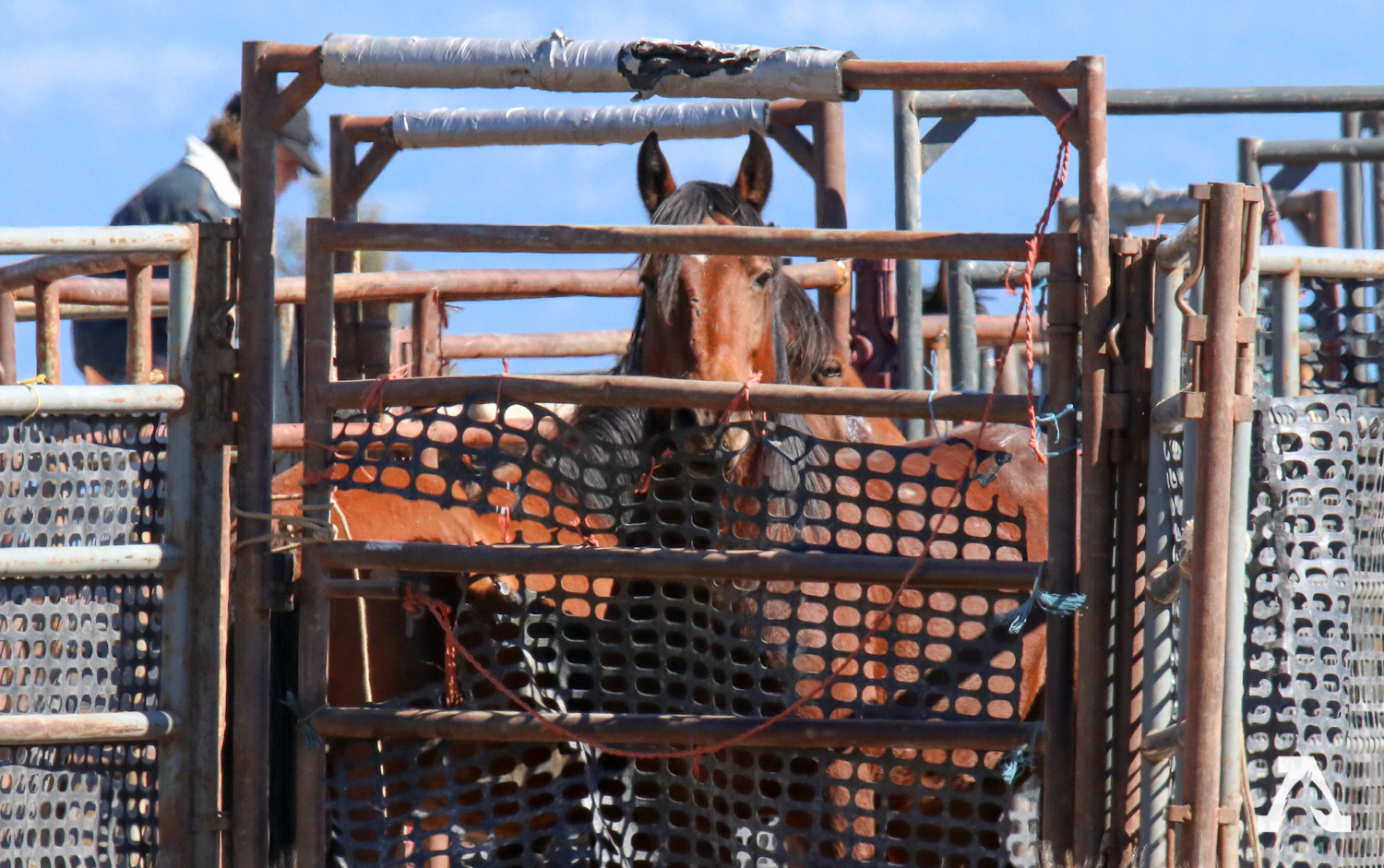 While the agency has set an Appropriate Management Level of only 206-402 horses on the 258,000-acre Devil's Garden Wild Horse Territory, it authorizes as many as 3,700 cattle and 2,900 sheep to graze for six months a year.  Yet, the Forest Service maintains that this roundup – the third in three years – is necessary to protect “rare and threatened native wildlife and the economy of Modoc County.”

Over the past two years, the Forest Service has rounded up and removed 1,431 Devil’s Garden horses.  After this fall’s operation, that number will soar to around 2,000 horses.  The cost to taxpayers for the roundups and removals alone is almost $2 million.  Cattoor Livestock Roundups was awarded over $600,000 the contract for this roundup.

After processing and sorting, captured horses will be transferred to either the Forest Service’s Double Devil Wild Horse Corrals in Alturas, California or the BLM Wild Horse and Burro Corrals in Litchfield, California that is authorized to take up to 250 younger horses.

In 2019, a census by the United States Geological Survey found that there were 1,803 horses on the Territory.  Although the Forest Service and local livestock operators have claimed that there are upwards of 4,000 horses, the agency’s current unscientific estimate is 1,663.

Two years ago, AWHC offered to implement and fully fund a pilot fertility control project to humanely reduce population growth rates in the herd two years ago, recommended by the National Academy of Sciences (NAS).  However,  the Forest Service rejected our offer, preferring instead to continue controversial, cruel, and expensive roundups and removals that are supported by its livestock allies even though the NAS found them to be unproductive and unsustainable.

In 2018, the Forest Service began selling horses – including mare/foal pairs – for $1 in an attempt to dump them and circumvent the ban on selling horses without limitations on slaughter.  This year, it also offered free transportation across the country for truckloads of horses – meaning 10-35 horses – to private buyers.

The Forest Service reported that the continuation of the $1 sales fee this year will depend on the success of its three different adoption attempts.  (While horses 10 and older are automatically eligible for sale, younger ones must be passed over for adoption three times.)  However, given that the agency will fast track the “adoptions” and that about a dozen horses from the 2019 removal at the Double Devil corrals still haven’t been adopted or sold, expect that more horses will be available for the rock bottom price of only one dollar – less than the cost of a candy bar or can of soda!

As for another year of free shipping, the Forest Service stated it will depend on its 2021 transportation budget which it does not have at this point.

After a two-day reprieve due to helicopter maintenance, another 33 horses were removed from the trap site near Drift Fence Tank, bringing the total to 309.  The goal for this 2020 roundup is 500 horses.

So far, the operation has resulted in the death of six horses.  According to the Modoc National Forest (MNF), two horses were euthanized after running into  corral panels and breaking their necks at the trap site and the Forest Service’s Double Devil Wild Horse Corrals.  Another four stallions were euthanized as a result of complications from gelding that the contract veterinarians have attributed to “a genetic issue.”

The MNF also reported that several other horses are receiving care from pre-existing bite and kick wounds, lameness, and other injuries as well as those received during the roundup operation.  Included among them are four horses under observation and pain management plans: two from bite wounds, one due to old age, and one due to a pre-existing wound.

The next update from the MNF will be Monday, Sept. 28.

September 22 and 23, 2020:  No Roundup and Removal Operations Due to Scheduled Helicopter Maintenance

Under a hazy blue sky, 25 horses were rounded up from the trap site near Drift Fence Tank.

The helicopter made three runs between 9:00am and 2:00pm, with each run bringing in small groups of between 7 and 10 horses.  Once again, although the observation site offered a good view of the horses moving into the opening of the trap, the helicopter was working behind the tree line, so it was not possible to see how it was working the horses as it drove them to the trap.

The air quality was classified as Unhealthy.

All horses appeared in good shape with body condition scores of between four and six.

There will be no round up and removal tomorrow because the helicopter will be receiving maintenance.

The U.S. Forest Service removed another 21 horses – a mix of stallions, mares, and foals – from the trap site near Drift Fence Tank.

The helicopter made two runs.  The first one began at around 9:00am, and by 10:00am eight horses were captured.  Although 100 or more horses are reported as living near Drift Fence Tank, it appeared that the helicopter had difficulty finding more because the next group of 13 horses were not brought in until 2:30 pm.  In between, the helicopter stopped once to refuel and another time to pick up an additional crew member.  After that, however, it flew for between 1 and 11/2 hours before the second group was brought into the trap.

The location for  public observation provided only a view of the horses moving into the funnel of the trap.  Therefore, because the helicopter was working behind the treeline, we couldn’t see when it located the horses or how long or fast it drove them into the trap once it did.

To provide real time coverage that would ensure accountability during roundups, AWHC has long advocated the use of cameras in helicopters for both the Bureau of Land Management and the Forest Service.  In fact, we repeatedly offered to buy them.  However, both agencies have ignored our offer.

Regarding the four lame horses at the Double Devil corrals, the Forest Service classified their injuries as being “pre-existing conditions.” This is troubling, especially for stallion and mare with the foal, because it means that they were driven by the helicopter for an unknown distance and speed even though they cannot bear weight on one of their legs.

AWHC is continuing to inquire about this classification and the condition and care of these horses. 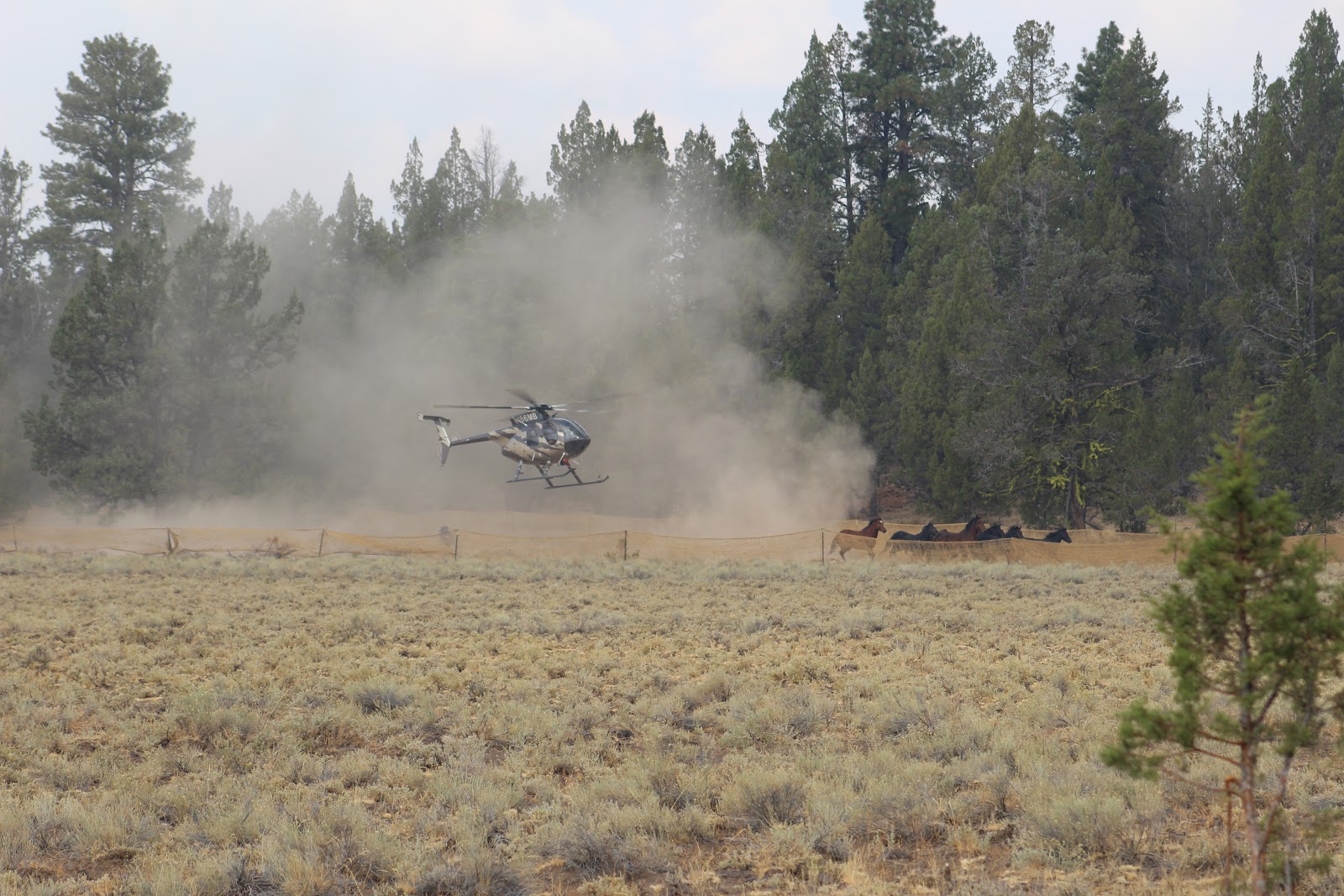 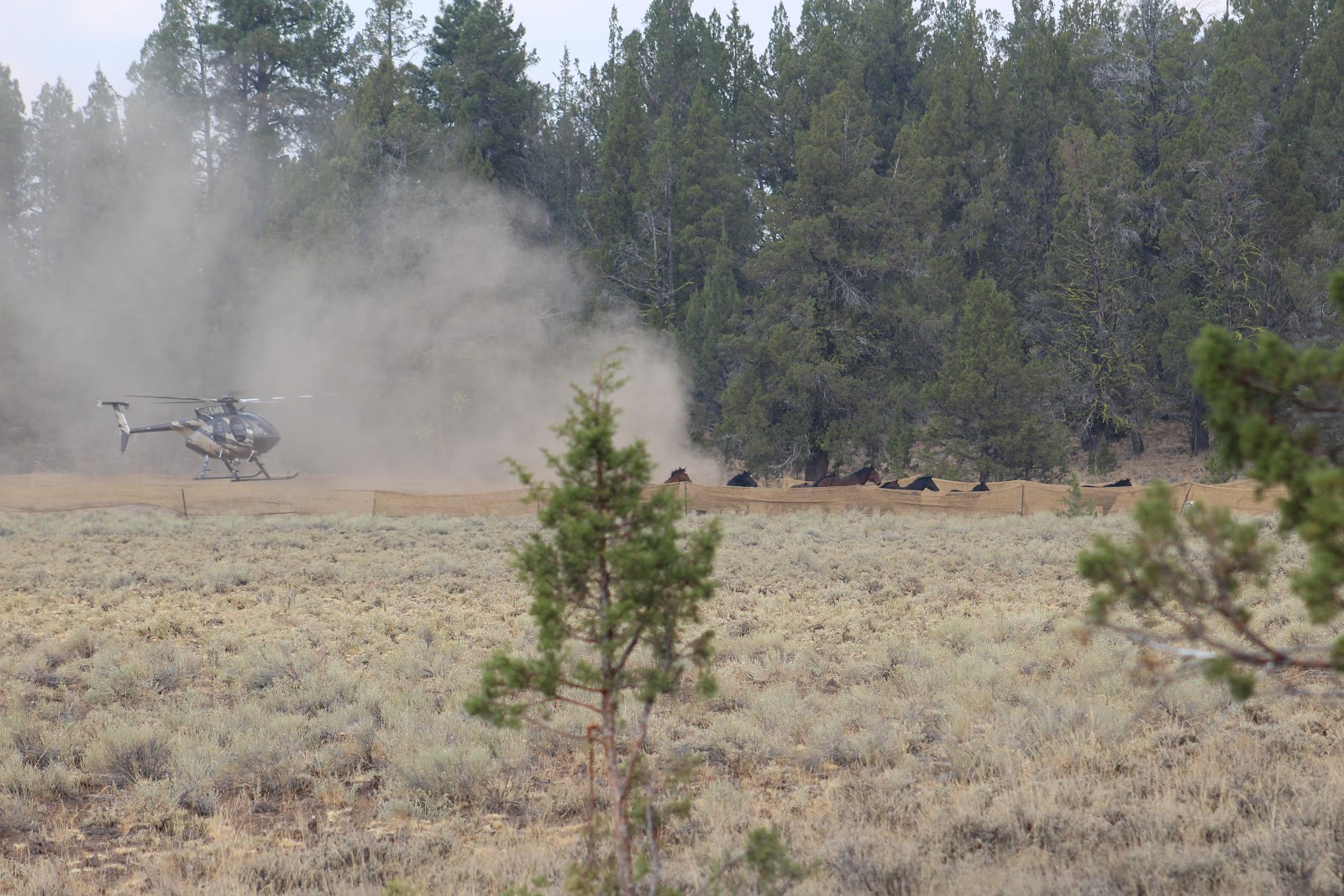 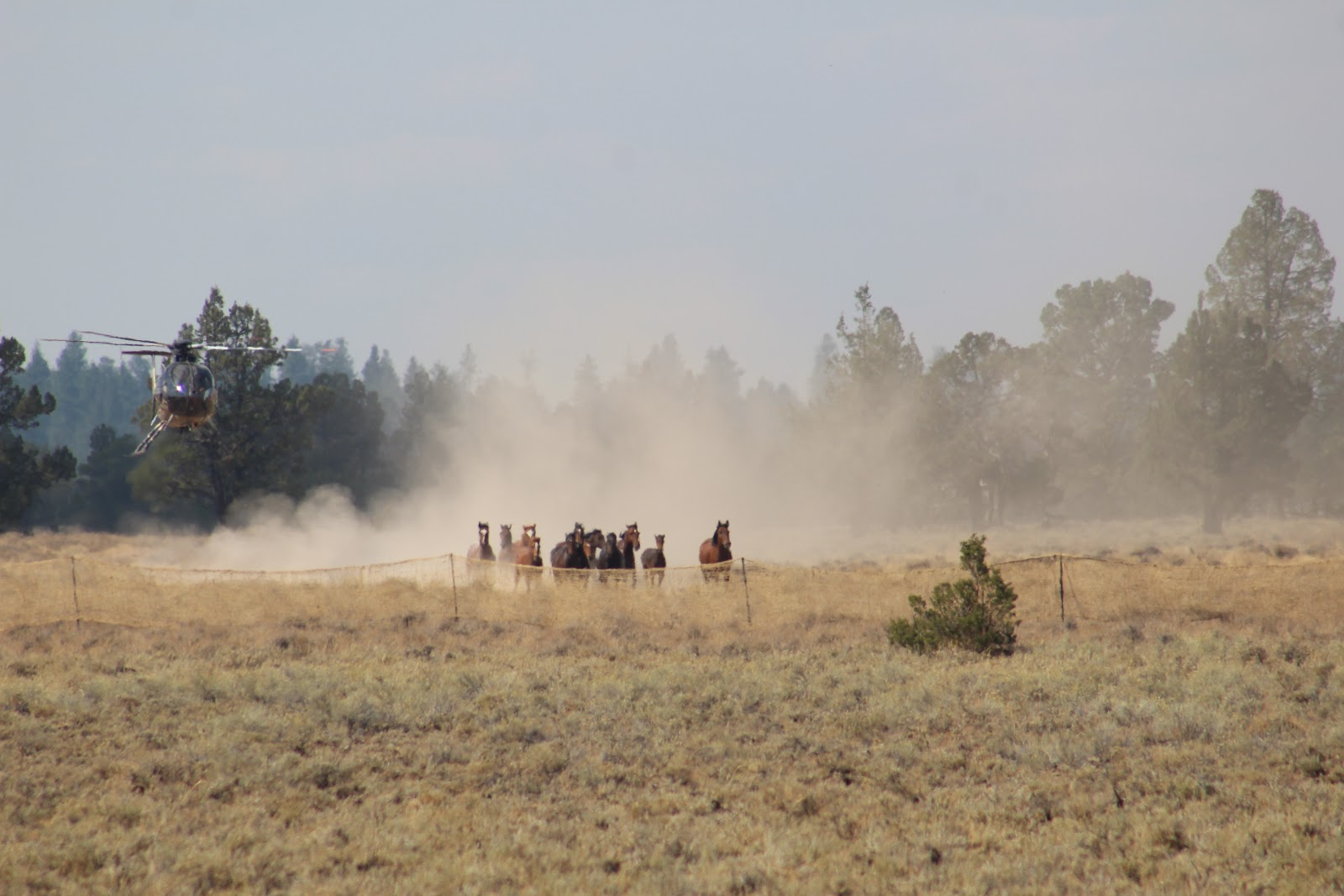 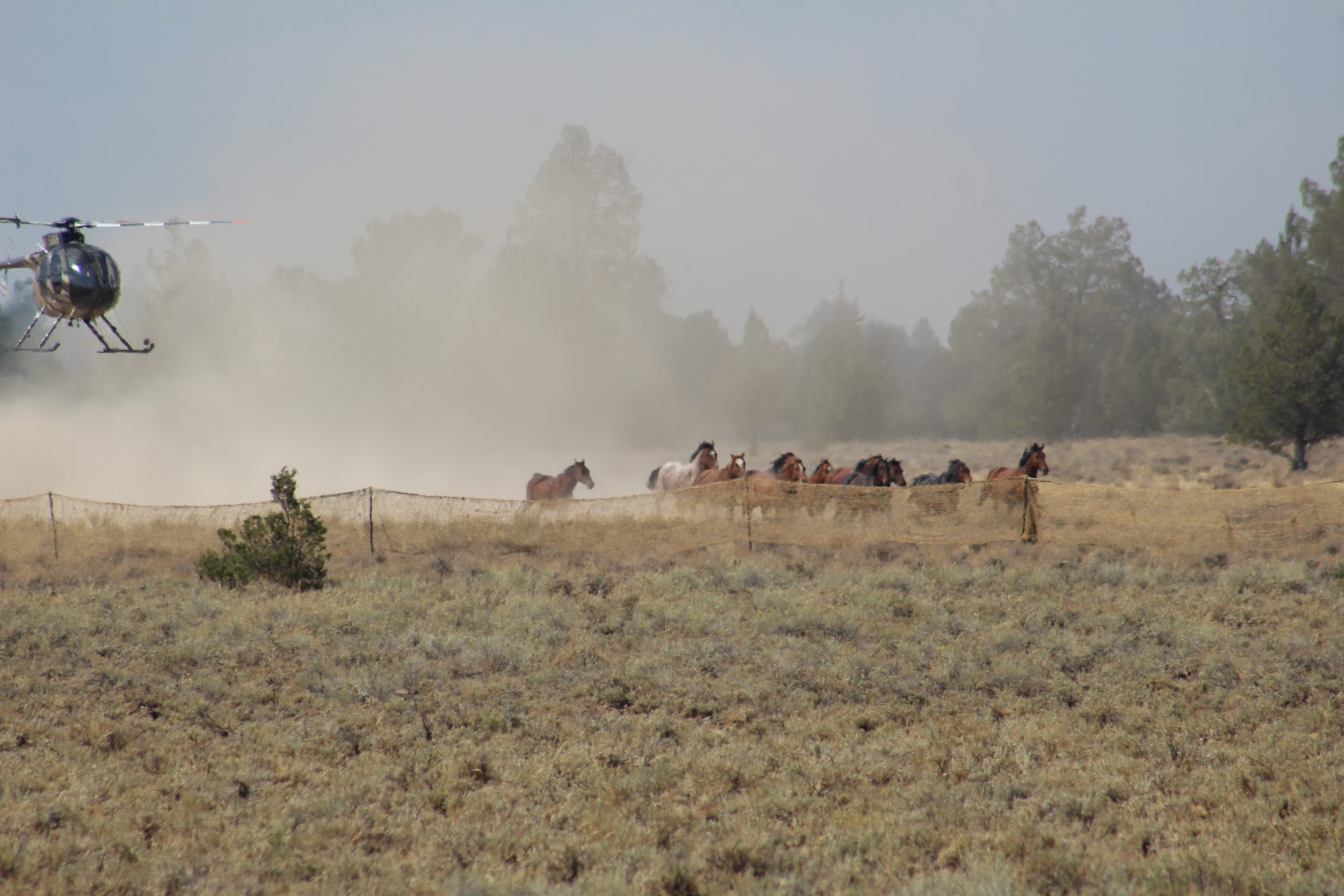 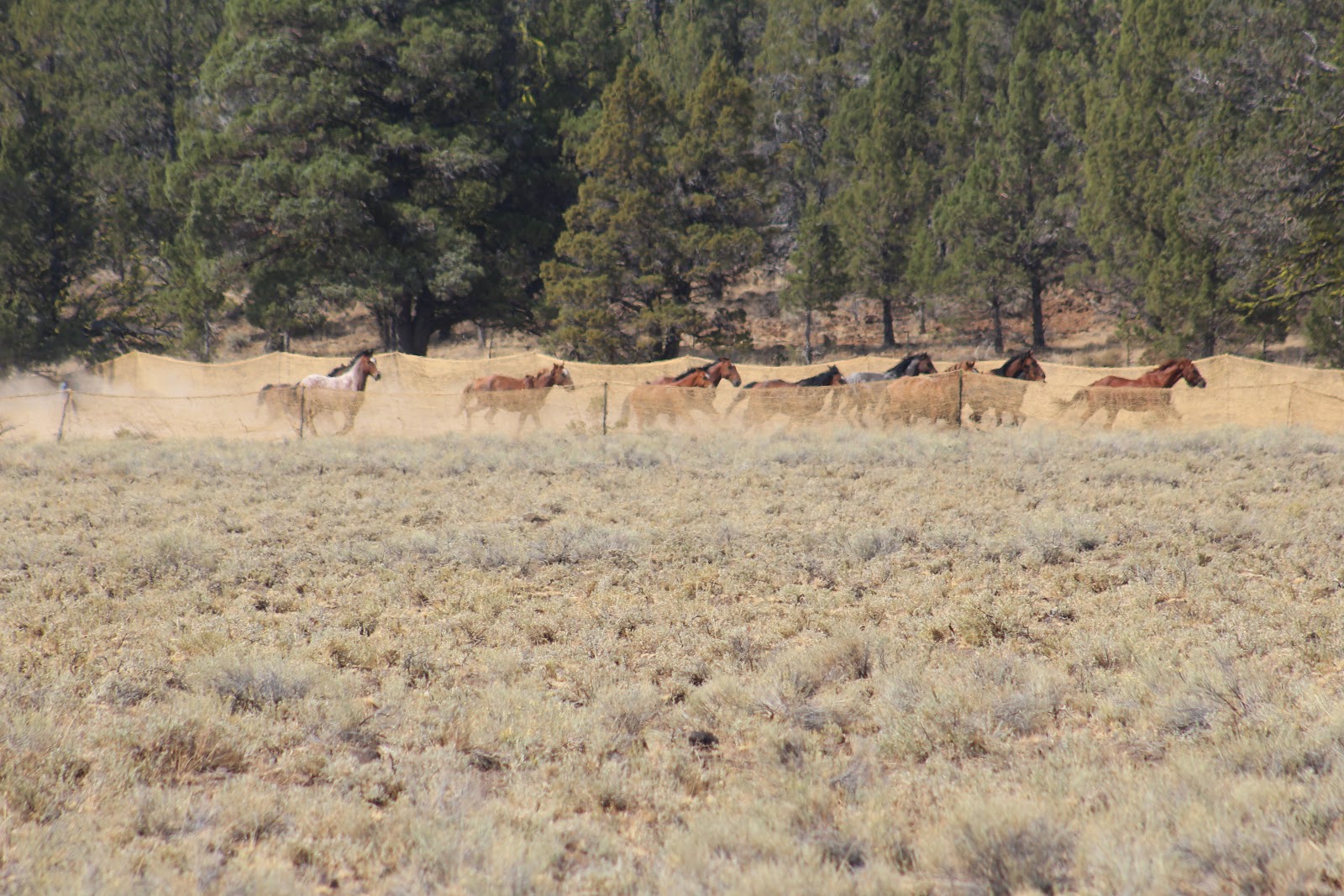 Today began with a tour of the Forest Service’s Double Devil Wild Horse Corrals, where almost 200 horses have been sorted into various pens by gender and location of capture.

Horses sported a spectacular range of colors, including bays, roans, sorrels, palominos, buckskins, cremellos, and greys.  Most had a body condition score of 4 and 5 – meaning they were at an excellent weight.  Some bordered on being obese.

We observed and photographed four horses with serious leg injuries.  Of particular concern was a mare with a very young foal.  Besides having a large gash on her shoulder, she was holding up her left front, unable to bear weight on it.  A stallion a few pens down was also not bearing weight on his left hind.

The two other horses had significant head-bobbing limps.

AWHC observers requested a status report on these horses -- including when they were seen by a veterinarian – and the treatment plan for them.

Like yesterday, the trap was located near Drift Fence Tank in the northeast corner of the Devil’s Garden Wild Horse Territory.  Temperatures were in the mid-60s, and air quality was classified as Moderate.

Starting at around 9:30 am and ending at 2:00 pm, the helicopter made four runs, bringing in small groups of between 3 and 13 or so horses per run.  While visibility of the helicopter moving them into the trap was good from the observation site, because Devil’s Garden is heavily forested, we could not see how far or fast it was driving the horses.  The last two runs were especially long, and the horses appeared tired when they came into sight and entered the trap and pen.

At the end of the day, 35 were removed.  However, after the roundup was called, we had a bittersweet surprise.  On the way back to our vehicles, we witnessed a sorrel stallion jump over the panels of the trap pen and come galloping toward us, only to veer off to a stand of trees.  At one point, he stopped, turned to face the pen and snorted several times, before leaving, never to see his family band again, who were watching him from the pen.

We did not see the other horse escape, but we wish him well.

Fifty-seven younger horses were transported to the Bureau of Land Management Litchfield corrals.

Since the roundup started over two weeks ago, two horses have died – one at the trap site and one at the Double Devil corral and both from crashing into corral panels.

September 18, 2020: Helicopters did not fly today because of wind.

The Forest Service removed from 21 horses from near Drift Fence Tank in the northeast corner of the Devil’s Garden Wild Horse Territory, bringing the total number of horses captured to 195.

The helicopter made four runs, starting at 9:00 am and ending at 12:45 pm after the contractor, Cattoor Livestock Roundup Company, called off the operation for the day because of increased risk of fire.

Although there was less smoke than in previous days, the air quality was classified as unhealthy. Last week, the University of California/Davis released guidelines for horses exposed to wildfire smoke that, for example, suggest limiting exercise of horses when smoke is present and giving them ample time to recover “from smoke-induced airway insult.” But apparently, given that the Forest Service is still rounding up horses during one of the worst fire seasons, those guidelines don’t apply to Devil’s Garden wild horses.

The area for public observation was about ¼ mile away from the trap site, making visibility of the horses being chased by the helicopter into the trap good; however, the view of the horses in the corral was obscured by trees.

The Forest Service still maintains that it’s finding “Happy Homes” for the Devil’s Garden horses, in spite of at least a dozen deaths of horses rounded up in 2019, either at the Forest Service’s Double Devil corrals or sold and transported to private individuals.  Its reasoning: sacrificing a few wild horses benefits the majority of them.

At the end of yesterday’s operation, Troy Cattoor, owner of  Cattoor Livestock Roundup Company, visited the observation site and offered his opinions on such topics as AWHC’s PZP Fertility Control Program – it’s a total failure and waste of time – and the damage that the overpopulation of wild horses are causing on public lands – refusing to entertain the notion that private cattle vastly outnumber wild horses and that, according to the National Academy of Sciences, the national Appropriate Management Level of just under 27,000 horses was not based on any legitimate science. 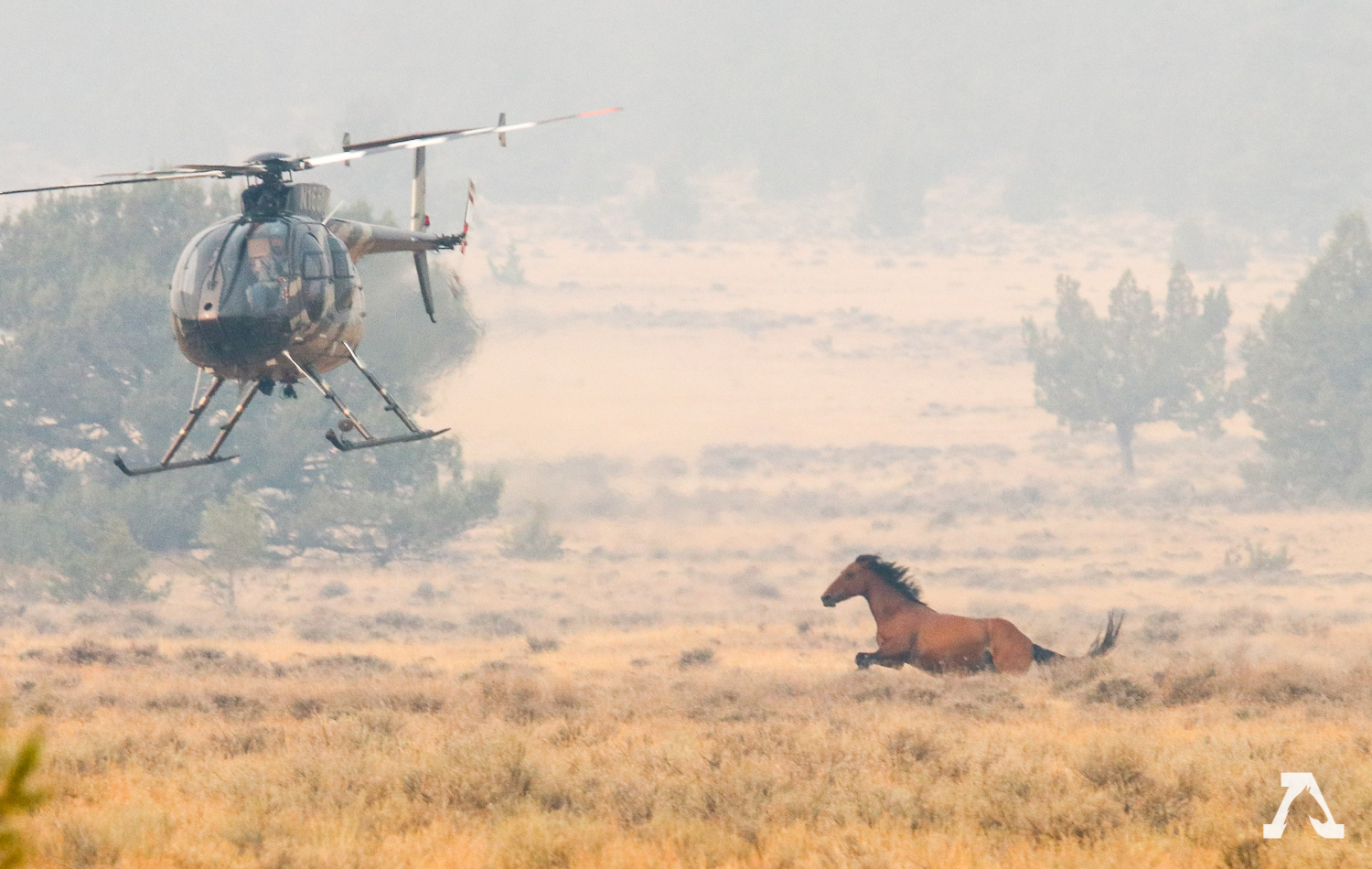 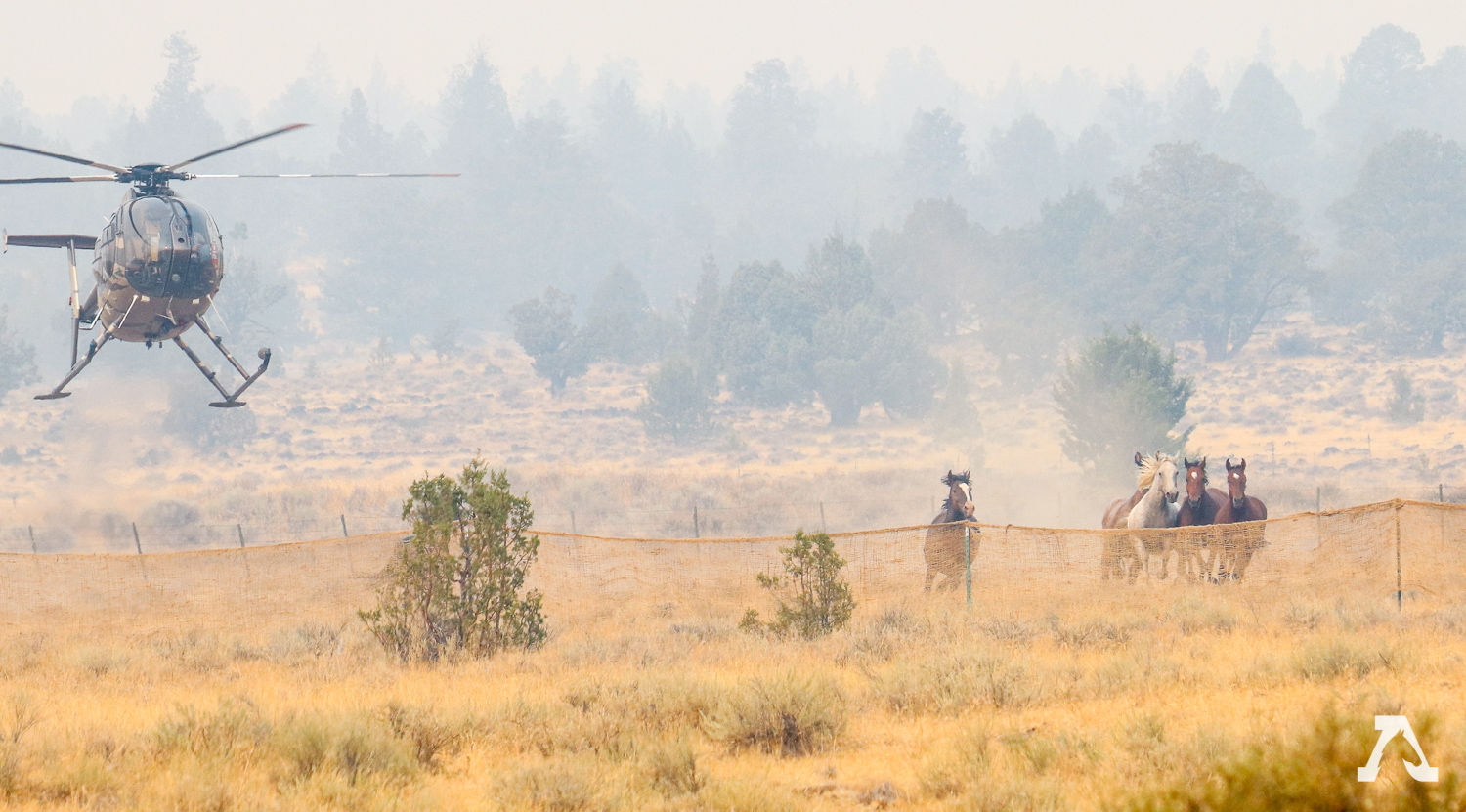 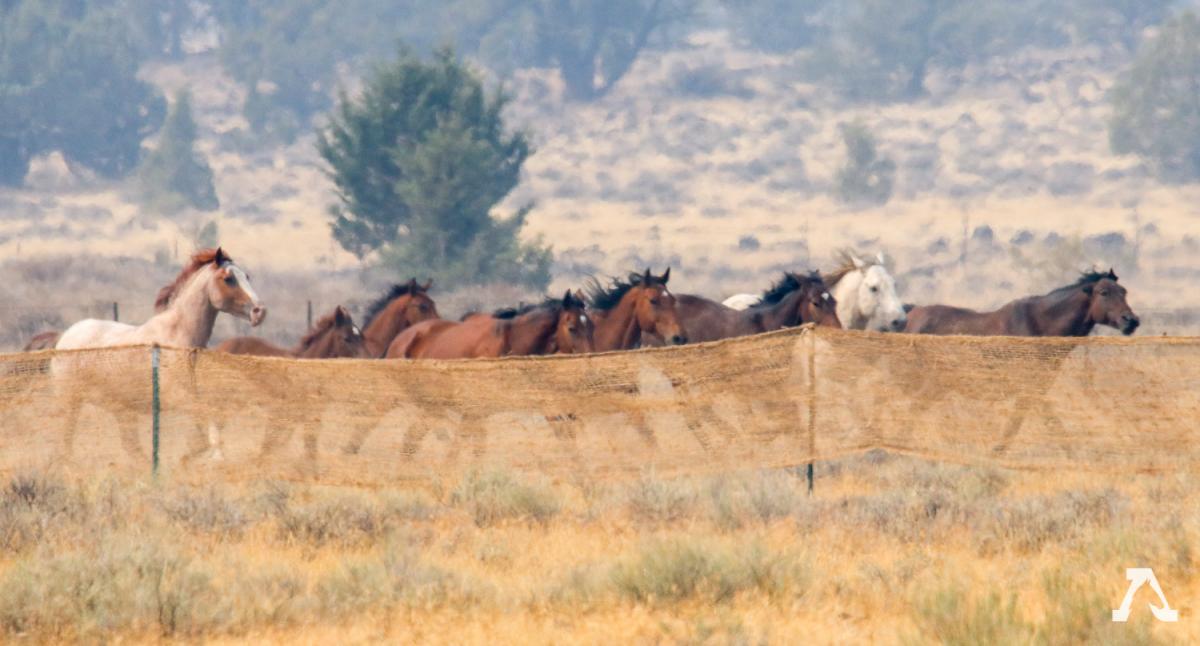 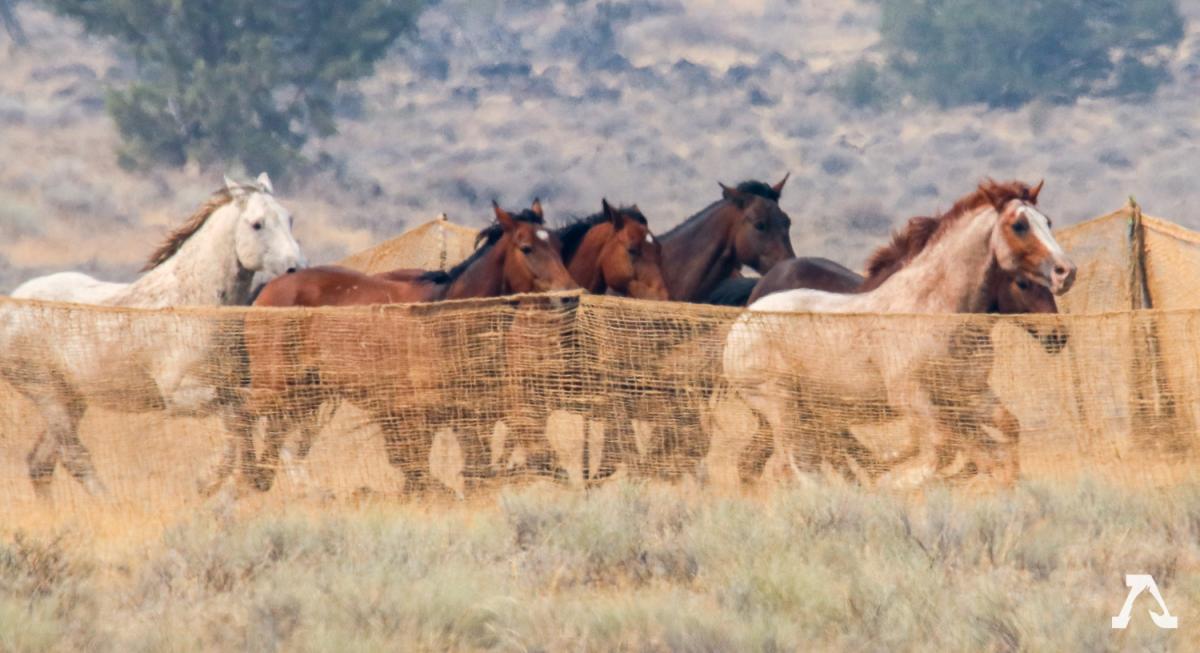 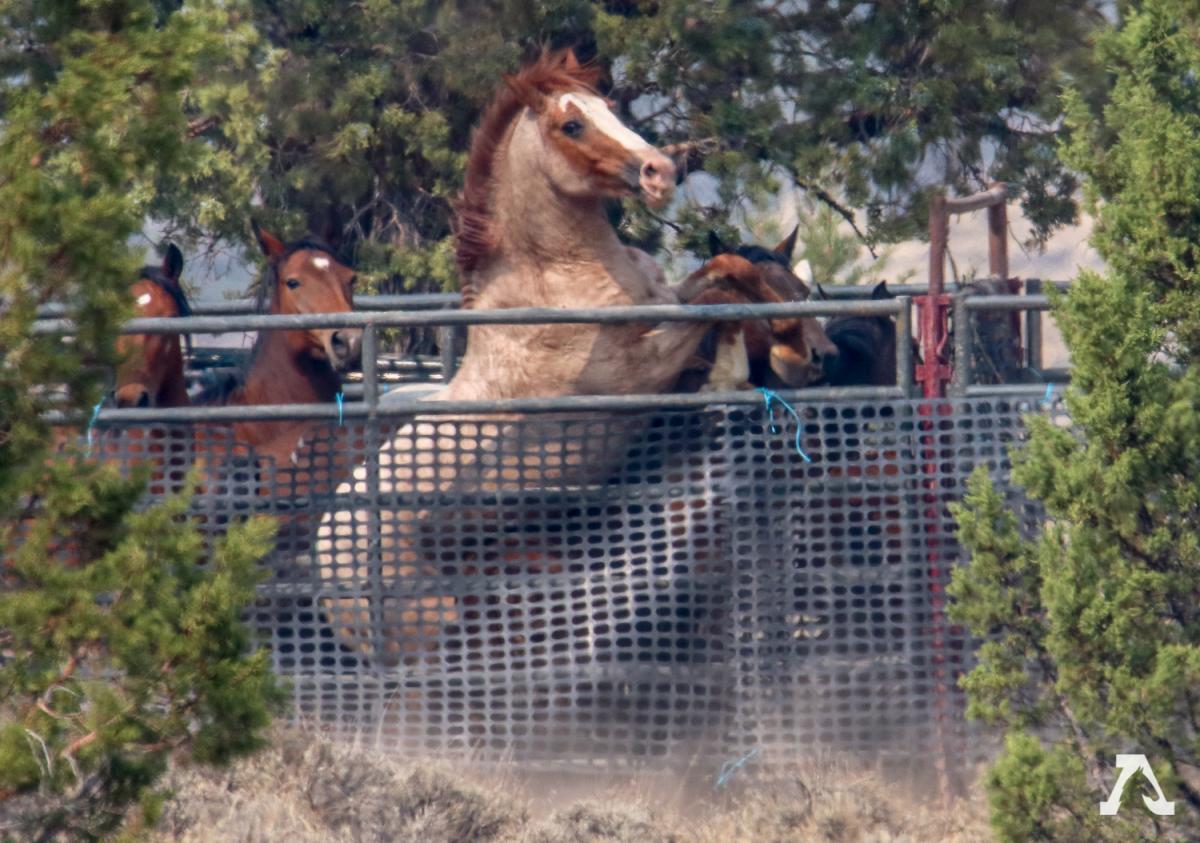 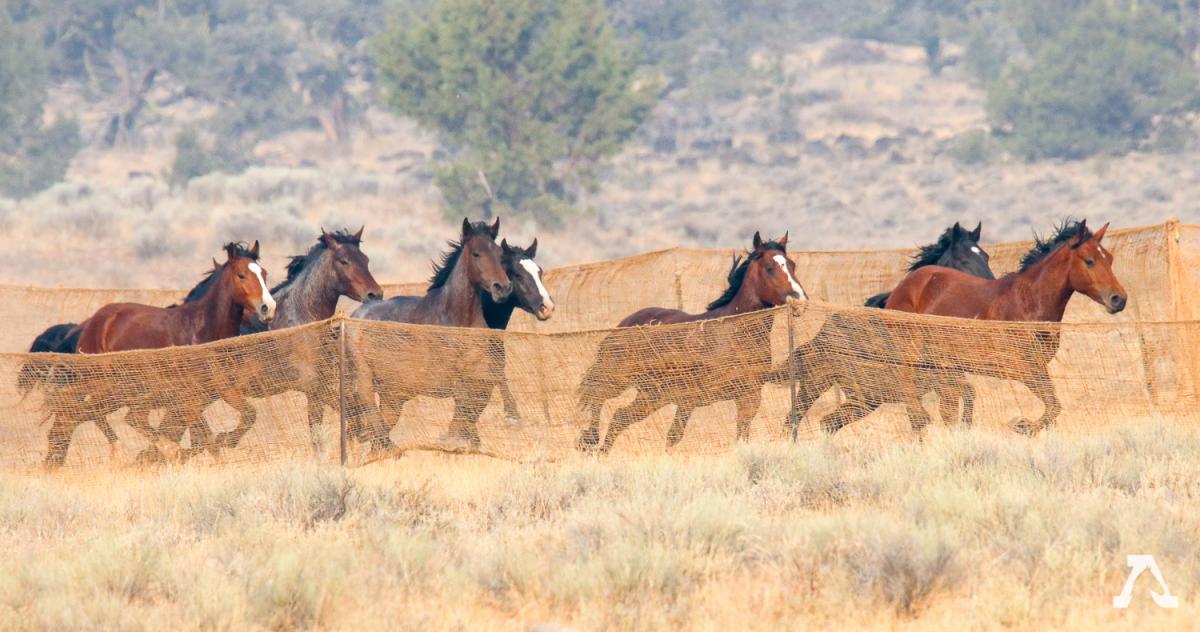 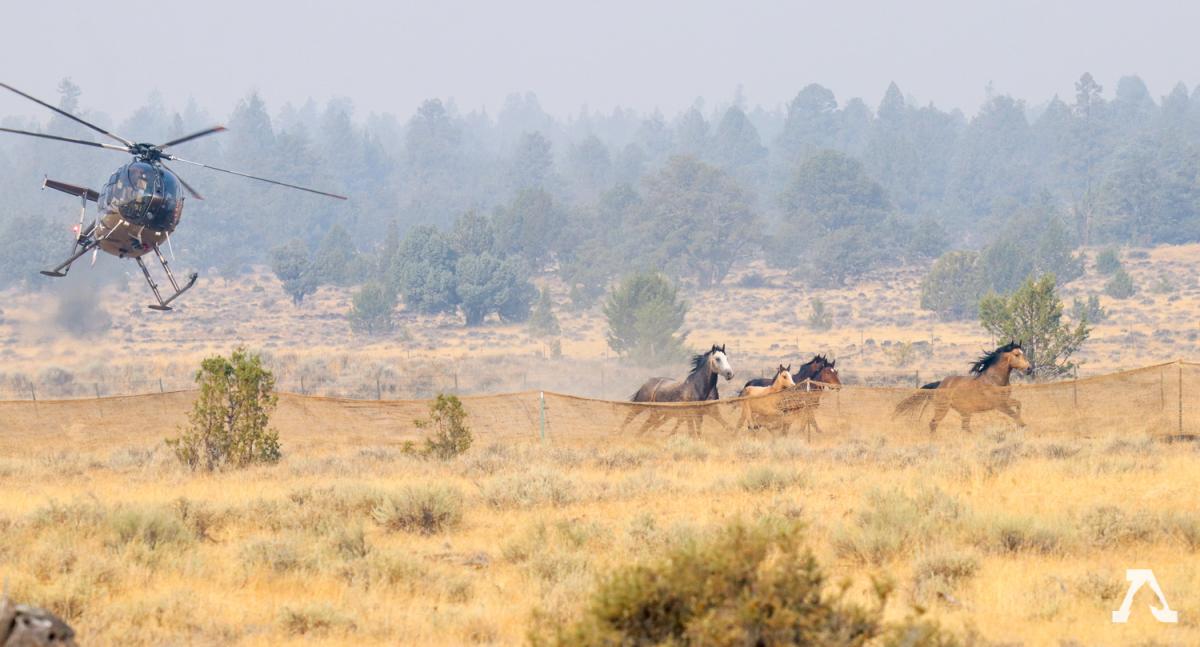 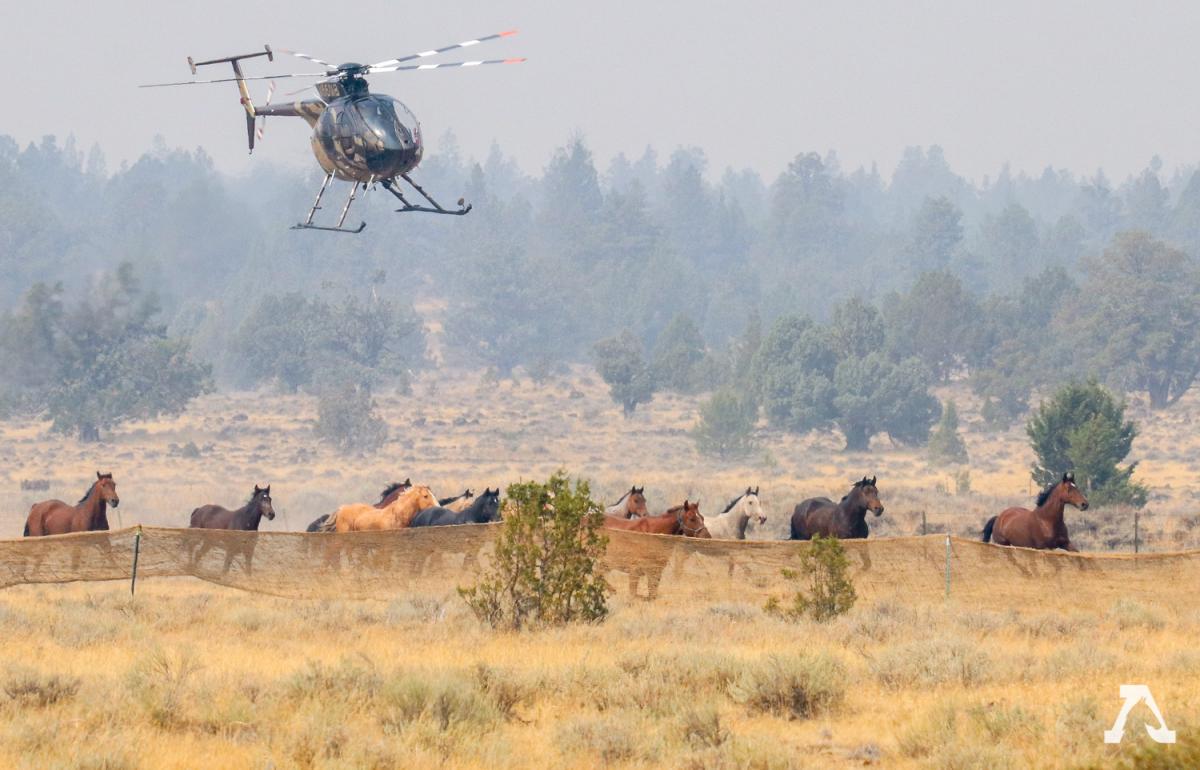 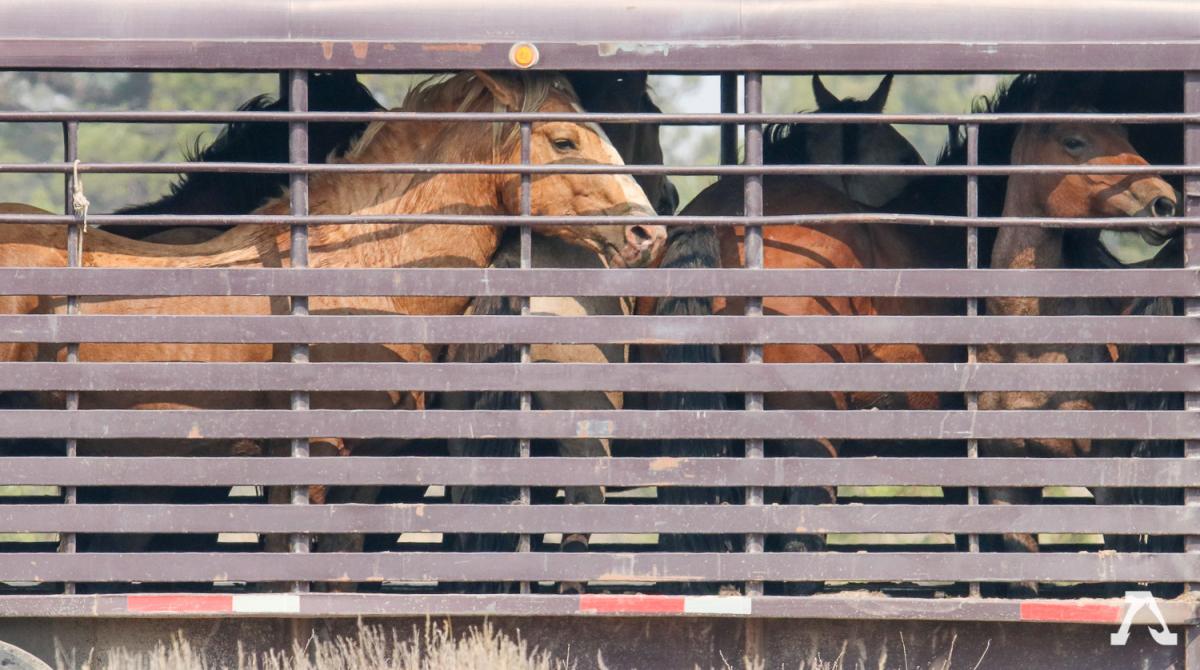 September 13, 2020: 13 wild horses were rounded up and removed under smokey conditions.

Today we had a close view of the trap wings. While there was a lot of cattle to be found in the area, the Forest Service found only a small number of horses today. The trapsite will be moved tomorrow. ​ 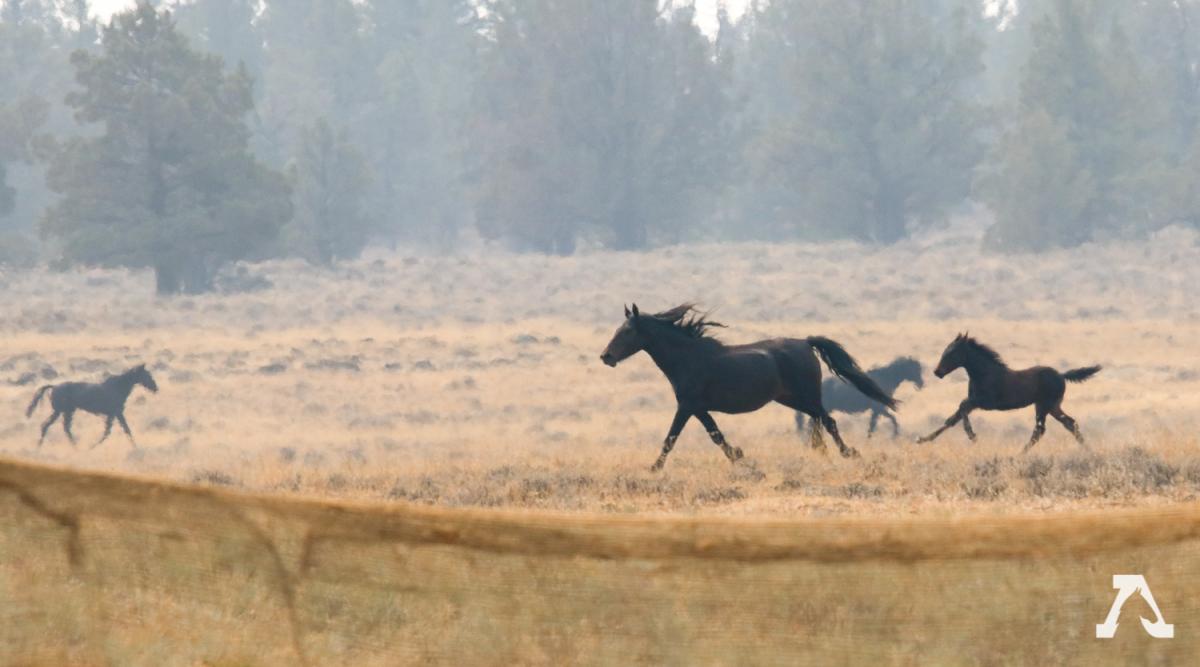 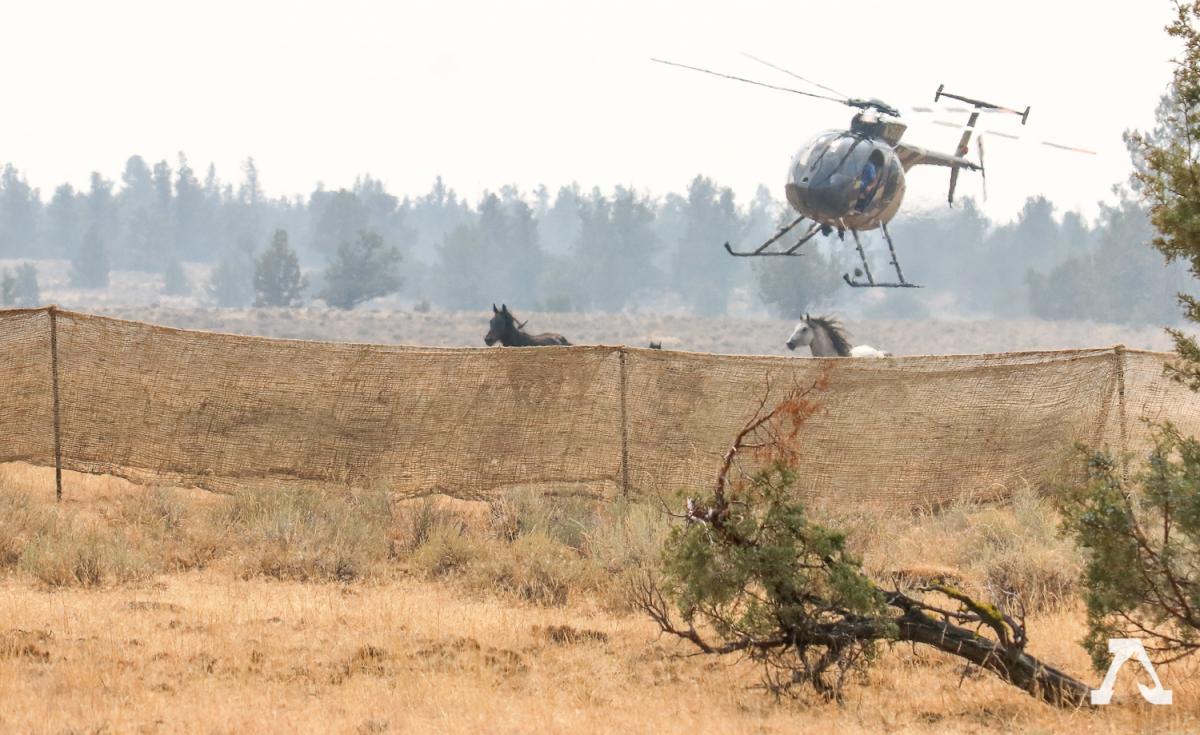 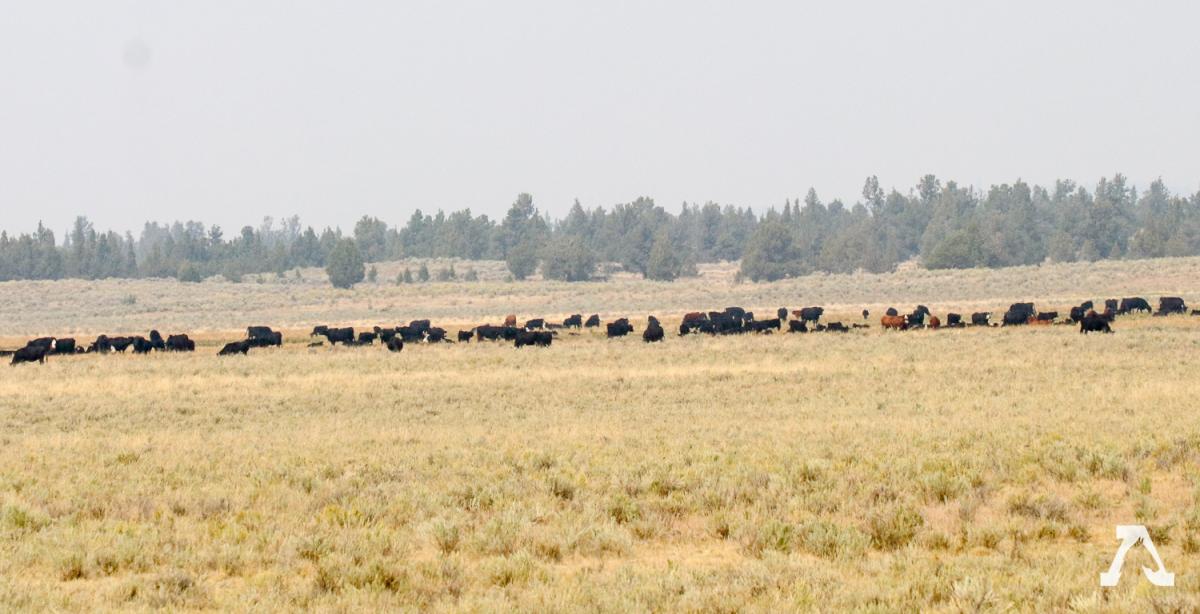 September 11 and 12, 2020: On days Three and Four of the roundup on the Devil’s Garden Wild Horse Territory,  71 horses were captured at the trap site north of Fairchild Swamp.  To date, 113 horses have been removed.

According to the Forest Service, of the 42 horses removed on September 9th and 10th, 14 were studs, 19 were mares, and 9 were foals.  One stallion died from an acute injury, reportedly from crashing into the corral at the trap site.

September 10, 2020: On the second day of the roundup, 8 horses were captured  from the trap site north of Fairchild Swamp on the Devil’s Garden Wild Horse Territory. The Modoc National Forest is promising a full update tomorrow.

September 9th, 2020: The U.S. Forest Service removed 34 horses during the first day of this fall’s helicopter roundup that is targeting 500 more California mustangs on the Devil's Garden Wild Horse Territory from within the Modoc National Forest in Alturas, California.